As early as the Great War, the British Army experimented with mounting a mortar between the rear horns of a Mark IV Tadpole. Placing a mortar on an armored vehicle has the advantages of the extra protection offered by the armor and the mobility of the platform. These vehicles became more common in the Cold War era and continue to be used by modern militaries. Among the many nations around the world developing their own mortar-carrying armored vehicles is Argentina. Using the development of the Tanque Argentino Mediano (TAM) and Vehículo de Combate de Transporte de Personal (VCTP) carried out by Thyssen-Henschel, the Argentinians designed their own vehicle, the Vehículo de Combate Transporte Mortero (VCTM).

In the 1970s, Argentina set up an ambitious program to find an adequate replacement for its aging fleet of WWII vintage armored vehicles. After several previous programs, including the up-gunning of its Shermans to ‘Repotenciado’ standard and purchasing French AMX-13s, including the licensed production of a small number of them, Argentina reached an agreement with the West German company, Thyssen-Henschel. Thyssen-Henschel then proceeded to develop a tank, the TAM, and an Infantry Fighting Vehicle/Armored Personnel Carrier, the VCTP, based on tried and tested components on a Marder 1 IFV chassis. Whilst the technology and many of the components would be produced in West Germany, assembly would take place in Argentina, along with the construction of armament, turrets and hulls.

In March 1980, with the objective of having a single company that would coordinate the whole program, Tanque Argentino Mediano Sociedad del Estado (TAMSE) was created. TAMSE was established as the main contractor of the TAM and VCTP and was given the task of overseeing the final assembly, delivery and integration of the tanks into the army, trials, homogenization of the optics and armament and potential exports. 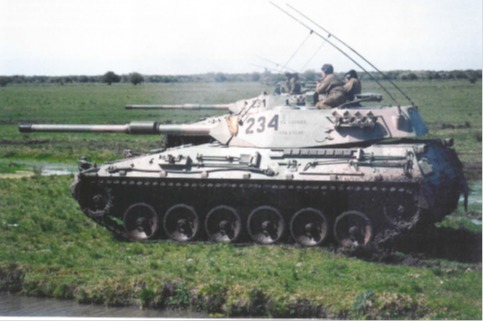 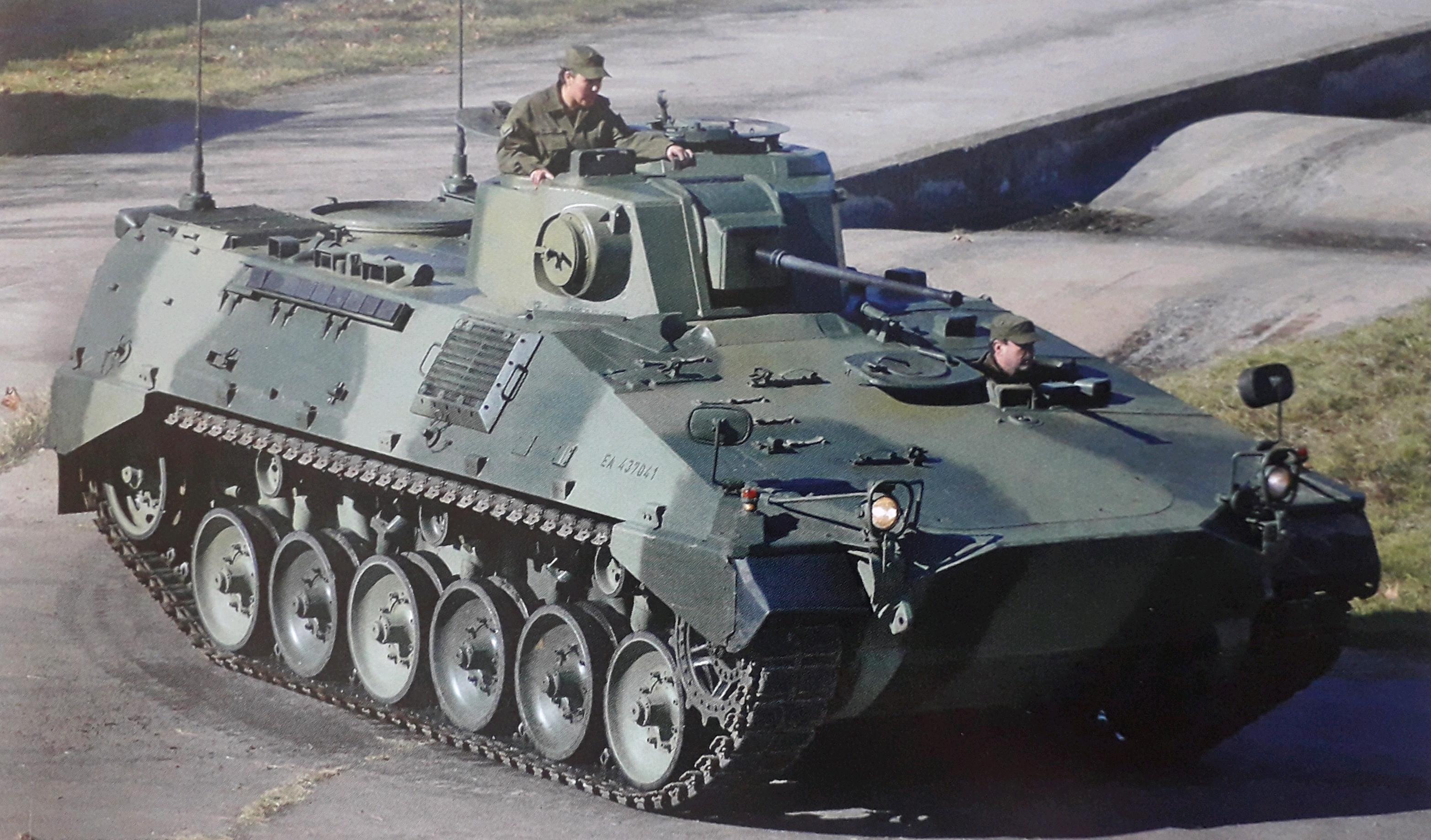 Even at this early stage, it was decided to use these facilities and acquired technologies and know-how to develop a family of armored vehicles based on this common chassis and components, easing production and familiarity. The first of the Argentinian produced vehicles, soon to be known as the TAM family, was a mortar carrying vehicle, the VCTM. With the design dating from 1980, the VCTM is essentially a turretless VCTP which carries a large 120 mm mortar. It is not known exactly when the project began, however, it originated with an order from Jefatura III del Comando del Ejército [Eng. Army Headquarters]. 2,000 blueprints were produced by the engineering department, apparently without foreign assistance. Nevertheless, Michael Scheibert, author of SPz Marder und seine Varianten, states that the VCTM was also a Thyssen-Henschel design. Sigal Fagliani, who adamantly defends this as the first TAM Argentinian project, gives the figure of 30 months between the production of the first prototype and the serial production vehicles. Unfortunately, most of the relevant authors do not provide dates.

Externally, in appearance and design, the VCTM is very similar to the VCTP, and thus, the Marder IFV. The frontal plate is at a pronounced 75º angle and the sides and rear plates are positioned at 32º. At the front of the tank, on each side, are headlights. Behind these, also on each side, are wing mirrors. On each side of the front-middle section of the hull is a set of 4 Wegman 77 mm smoke launchers. In the center of the vehicle is a large hatch for the mortar to fire. This hatch consists of three sections, one opening to the front and two opening to the sides.

The VCTM’s armor is made out of electrically welded nickel-chromium-molybdenum steel. The front plate is 50 mm thick and the sides and rear 35 mm.

Additionally, the VCTM is equipped with an NBC protection system allowing the crew to operate in a contaminated area for up to 8 hours, although they cannot fire without losing NBC protection. The NBC system feeds the main and driver’s compartment with filtered air that can absorb solid or gaseous elements from poisonous or radioactive substances. The vehicle is able to operate in very harsh temperatures, from as low as -35ºC to as much as 42ºC. There is also an automatic fire extinguishing system that can be triggered from the interior or exterior.

All vehicles in the TAM family, though more often than not, the VCTM, can carry an Israeli-built RKM mine-roller for mine-clearing duties on a fitting placed on the front of the hull. Mortar vehicles are not often used in these duties, but Argentina seems to have. However, if Argentina were to ever actually enter any real conflict, it may be unlikely that the VCTMs continue to carry out these duties.

The VCTM carries a French 120 mm Brandt AM-50 mortar as its main armament, which is 1,746 mm long and weighs 242 kg. It has a maximum elevation of 85º but is limited to 17º horizontal traverse, meaning that to fire at different angles, the VCTM has to move. The aiming optic is an AOP-1. These figures are those given by Mazarrasa, whilst Sigal Fagliani produces different data. To start with, Sigal Fogliani denominates the mortar as LR and claims ‘it is completely constructed by Dirección General de Fabricaciones Militares’. The dimensions and weight provided by Sigal Fogliani are a tube length of the mortar of 1.5 m weighing 44 kg, with an additional 22.5 kg from the mount, 35.6 kg from the base plate, and 1.3 kg from the aiming optics. Sigal Fogliani also assesses that the mortar is on top of a rotating base which allows it to fire at 360º with an elevation of between 45º and 80º. Sigal Fogliani’s claims are spurious as he designates the mortar wrongly and mentions that there are only two crew members operating the mortar. All photographic evidence points towards 5 mortar operators. Regardless, the AM-50 fires between 8 and 12 rounds a minute. A total of 49 rounds are carried inside the VCTM behind the mortar stored in 7×7 racks. There are four ammunition types:

Secondary armament consists of a 7.62 mm FN MAG 60-40 machine gun placed in a TPA-1 remote-controlled weapon station at the rear of the vehicle. The 7.62×51 NATO-standard bullets the machine guns fire have a muzzle velocity of 840 m/sec and a firing range of around 1,200 m. Additional weaponry for the crew includes their personal weapons, an 88.9 mm Instalaza M65 rocket launcher, and 9 hand grenades.

The VCTM retained the suspension and running gear of the Marder 1, a torsion bar-type suspension with six rubber-tired paired roadwheels and three return rollers on each side. The first, second, fifth, and sixth road wheel stations have hydraulic shock dampers to absorb a significant part of the stress created by firing the mortar.

The tracks are of a Vickers system, each track consisting of 91 links with rubber tank treads. These can be substituted with snow cleats if required.

The interior of the VCTM is divided into two main sections with the frontal section being further sub-divided into two subsections. The bigger of these subsections, occupying 2/3 of the space, houses the engine, whilst the smaller one is for the driver and driving mechanisms to his left. There is a hatch above the driver’s position and three episcopes, a hatch, and a periscope for the vehicle’s commander, and the whole section of the frontal hull covering the engine can be opened for engine maintenance.

The central area is open-topped and houses the large mortar. This area is also occupied by four of the five mortar operators, with the other one, the aimer, positioned behind them with a hatch of his own. Behind the mortar are the ammunition racks. One of the mortar’s operators is also in charge of operating the TPA-1 remote-controlled weapon station and has 2 episcopes to assist in those duties.

Communications are by means of VHF SEL SEM-180 and SEM-190 systems and an SEL SEM-170 radio-receptor.

The engine is kept cool by two ventilators at its rear powered by a 33 hp engine of their own.

The gearbox on the VCTM is the HSWL 204 automatic planetary gearbox with torque converter and four forward/four reverse gear ratios. The first three are epicyclic gear trains (also known as planetary gears) and the fourth is a clutch disc.

The maximum road speed is 75 km/h forwards and backward. Off-road or cross-country speed is limited to 40 km/h. The maximum range is limited to 590 km, but it can be increased by 350 km to 840 km with the additional 200 l fuel tanks. The fuel capacity inside the tank is a meager 650 l, but with the addition of two 200 l fuel tanks on the back of the tank, this can be extended to over 1,000 l. However, these are not usually added to the VCTM. Fuel tanks with other capacities have also been used.

Among other performance indicators, the VCTM can overcome 60% gradients, 30% side slopes, 1 m tall obstacles, and 2.9 m trenches. When it comes to fording, it is capable of fording 1.5 m-deep waters without preparation, increased to 2 m with preparation.

Not much is known about the service of the VCTMs, but it can be assumed that, as with the TAM and VCTP, they were used during several of the attempted coups that rocked Argentina in the late 1980s and early ’90s, the ‘carapintada’ military coups. In the last of this series of coups (December 3rd 1990), rebellious forces under Captain Gustavo Breide Obeid took over a series of military installations, among them TAMSE. The officer who took the factory, Colonel Jorge Alberto Romero Mundani, ordered 9 or 10 TAM in the factory to head to Buenos Aires. On route, the tanks ran over a group of civilians, killing 5 of them before heading off to Mercedes. Seeing that the attempted coup was heading for failure, Romero Mundani committed suicide, one of 8 military casualties of the failed coup. Some sources (Cicalesi & Rivas) claim that Romero Mundani was actually commanding a VCTM.

Video showing a number of TAMs, a VCTP, and a VCTM at the front of the TAMSE installations during the 1990 ‘carapintada’ coup. The officer commanding the VCTM which appears mid-way through the video may well be Romero Mundani – source: DiFilm on YouTube

There is a slight divergence in the sources over the numbers built, with Cicalesi & Rivas putting the number at 36 and Mazarrasa at 50. Notwithstanding, each of the mechanized infantry regiments equipped with VCTMs have them in groups of 4 to provide fire support to infantry units. In other mechanized infantry regiments without VCTMs, this duty is carried out by the M106 mortar carrier, which instead of the usual 107 mm mortar, has a 120 mm mortar.

Whilst experiencing a not too noteworthy career, the VCTM provided a valuable lesson to the Argentinian military authorities, and that was that they could apply their newly acquired technology to produce their own vehicles with a commonality of mechanisms and pieces for different roles. This not only supposed an easier retraining of crews and more common and faster production of replacement parts but eliminated reliance on foreign military hardware. However, as with other vehicles of the TAM family, the resources have not always been there to domestically sustain the production of these specialized vehicles, thus vehicles have to be imported to make up the numbers.