One of the biggest problems with Self Propelled Guns (SPGs) is that they can only carry a limited amount of their precious and delicate ammunition, so other vehicles have to be tasked with supplying it to the SPGs. Argentina did exactly that at the beginning of the current millennium when they converted the Tanque Argentino Mediano (TAM) chassis into the Vehículo de Combate Amunicionador (VCAmun) to supply the Vehículo de Combate de Artillería (VCA).

The origins of the VCAmun lay in the failures of another project, the Vehículo de Combate Ambulancia (VCAmb). In 2001, Comando de Arsenales, which had taken over from TAMSE (Tanque Argentino Mediano Sociedad Estatal) as the company in charge of the tank assembly facilities in Boulogne sur Mer, built a mock-up for a chassis to go on a TAM running gear and fulfill the role of combat ambulance. Whilst this vehicle had some potential, it did not get past the mock-up stage and was rejected. However, the lessons learned were not lost. The following year, Comando de Arsenales presented a new vehicle that used the same chassis for the purpose of resupplying the VCAs which had entered service in 1997 with ammunition. The main difference is that instead of medical equipment, the VCAmun had a conveyor belt to feed the ammunition into the VCA’s turret. Two were built by Comando de Arsenales and the plan was to build at least 16 more to supply and assist every single VCA attached to an armored artillery group.

Given that the VCAmun is based on the TAM, it shares many of its characteristics and, by extension, also with the Marder 1 IFV the TAM is based on. The frontal plate is at a pronounced 75º angle and the front half of the sides are positioned at 32º. The second half of the vehicle has a tall superstructure instead of the turret, tall enough to house the 155 mm ammunition the VCAmun carries. At the front of the tank, on each side, are headlights. Behind these, also on each side, are wing mirrors. On each side of the front-middle section of the hull are a set of 4 Wegmann 76 mm smoke launchers. On the sides of the VCAmun’s superstructure, the crew’s backpacks are carried, along with towing equipment.

Given that the VCAmun is based on the TAM, the armor is made of electrically welded nickel-chromium-molybdenum steel. The front plate is 50 mm thick and the sides and rear 35 mm. There are no details for the superstructure’s armor, but an informed assumption would put it at 35 mm.

It can also be supposed that, additionally, the VCAmun is equipped with the same NBC protection system as the TAM, which allows the crew to stay or pass through a contaminated area for up to 8 hours, but not operate in it. The NBC system feeds the main and driver’s compartment with filtered air that can absorb solid or gaseous elements from poisonous or radioactive substances. The vehicle is able to operate in very harsh temperatures, from as low as -35ºC to as high as 42ºC. There is also an automatic fire extinguishing system that can be triggered from the interior or exterior.

On the top of the superstructure is the only armament the VCAmun carries, a 7.62 mm FN MAG 60-40 machine gun on the commander’s cupola. The 7.62×51 NATO-standard bullets the machine guns fire have a muzzle velocity of 840 m/sec and a firing range of around 1,200 m. The crew also carry their personal weapons and presumably between 8 or 9 hand grenades.

The VCAmun retained the suspension and running gear of the Marder 1, a torsion bar-type suspension with six rubber-tired paired roadwheels and three return rollers on each side. The tracks are of a Vickers system, each track consisting of 91 links with rubber tank treads. These can be substituted by snow cleats if required.

The interior of the VCAmun is divided into two main sections, with the frontal section being further sub-divided into two sub-sections. The bigger of these sub-sections, occupying 2/3 of the space, houses the engine, whilst the smaller one is for the driver and driving mechanisms to his left. There is a hatch above the driver’s position and three episcopes, and the whole section of the frontal hull covering the engine can be opened for engine maintenance.

The engine on the VCAmun is the MTU MB 833 Ka 500 diesel engine, a six-cylinder rated at 537 kilowatts (720 hp) at 36.67 revolutions per second or 2,200-2,400 revolutions per minute which is used on all TAM family vehicles. The engine is kept cool by two ventilators at its rear powered by a 33 hp engine of their own.

The gearbox on the VCAmun is the HSWL 204 automatic planetary gearbox with a torque converter and four forward/four reverse gear ratios. The first three are epicyclic gear trains (also known as planetary gears) and the fourth is a clutch disc. Again, this gearbox is used on all TAM family vehicles.

The rear section carries the ammunition, 80 rounds of 155 mm ammunition of the different types the VCA fires. These are supplied to the VCA by means of a 3 m-long conveyor belt which is powered by a 24 V electrical engine. The conveyor belt exits the VCAmun through the rear door, originally designed for entry/exit of the crew on the TAM, and enters the VCA through a rectangular hatch at the top rear of the turret. A total of 28 rounds, the VCA’s capacity, can be supplied in only two minutes. This process is carried out by two of the VCAmun’s crew and the two loaders on the VCA. The total crew consists of four: driver, commander, and two ammunition porters.

It can be assumed that communications are by means of VHF SEL SEM-180 and SEM-190 systems and an SEL SEM-170 radio-receptor, as this is used on most other TAM family vehicles. 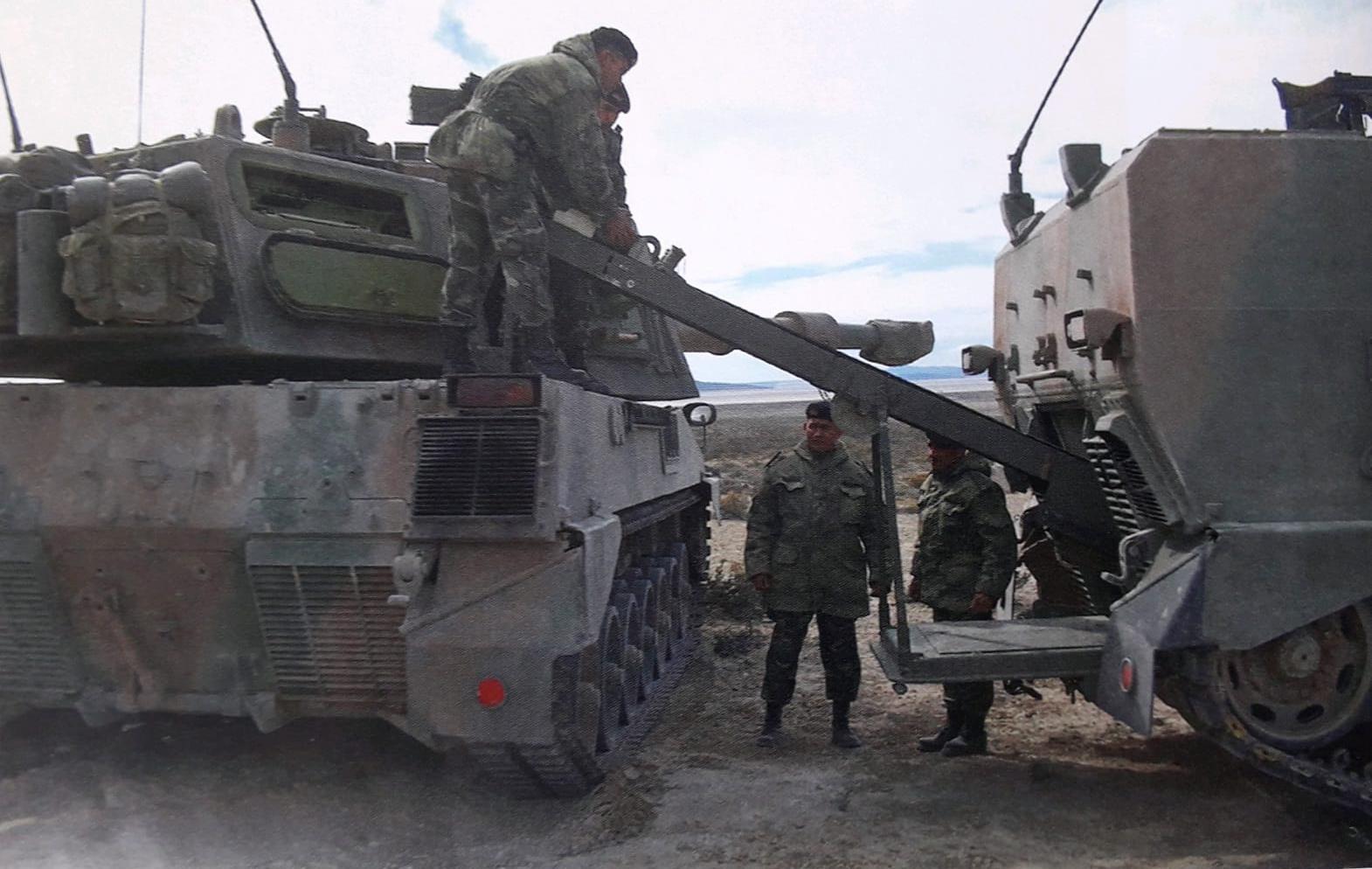 Despite its merits, the VCAmun is yet another lost opportunity in a long list of Argentinian military projects terminated too early because of budgetary constraints or lack of interest. Only two vehicles were built and serve the armored artillery groups equipped with VCAs stationed in the southern part of the country. These are the Grupo de Artillería Blindado 9 and the Grupo de Artillería Blindado 11 «Coronel Juan Bautista Thorne». GA Bl 9 is based in Chubut province in the middle of the Patagonian plateau, whilst GA Bl 11 is based in the town of Comandante Luis Piedrabuena, Santa Cruz province, the southernmost point of Patagonia. The VCAmuns carry out their tasks alongside modified M548A1s.

The VCAmun has fulfilled the role it was initially set out to do, supply the VCA with ammunition. Unfortunately, financial and administrative issues have meant only two have been built. It is unlikely any more will ever be constructed but the remaining two will probably serve in the Ejército Argentino for as long as the VCA does.