By the end of the 1950’s, the United Kingdom had a lot of old, worn out, obsolete, or surplus tanks, many dating back to World War 2. The new A41 Centurion tank had already entered service and was significantly better than anything before it, so many of these tanks were simply redundant. In the post-war austerity period, Great Britain was still rebuilding its economy after WW2 and it needed foreign cash to help pay off its debts. One solution was to sell off some of these stocks of tanks and one of the nations receiving these arms was to become one of the most notorious: Cuba.

Essentially, the officially named ‘Tank, Cruiser, A34, Comet‘, was an upgrade to the Cromwell cruiser tank. It was designed in 1943 and entered service in 1945, towards the end of the Second World War. It set a trend in tank design that would be followed by the world’s next generation of tanks, the Main Battle Tank or ‘MBT’, as it had a balanced blend of armor, mobility and firepower.
It was powered by the Rolls Royce Meteor Mk.III 600hp V12 petrol engine. This engine was derived from the Merlin engine which was used on the famous Spitfire fighter plane and gave the tank a top speed of 32 mph (51 km/h). The Comet weighed 33.53 tonnes (32.7 long tons). This weight was supported on a Christie type suspension with five road-wheels. The drive sprocket was at the back while the idler was at the front. The track return was supported by four rollers.
The main armament consisted of the Vickers 77mm (3.03 in) High-Velocity Gun, which was derived from the famous 17-Pounder anti-tank gun. Firing APCBC (Armor-Piercing Capped Ballistic-Cap), the gun could penetrate up to 147 mm (5.7in) of armor. Secondary armament consisted of coaxial and bow-mounted 7.92mm BESA machine guns. The tank had up to 102mm (4in) of armor.
The Comet had a crew of five, consisting of commander, gunner, loader, hull machine-gunner, and driver. The tank served with the British Army until 1958 when it was replaced by the Centurion. The Comet stayed in service with a number of other countries, however, including The Republic of Ireland, Burma, and Finland.

The Government of Fulgencio Batista ran the Caribbean island of Cuba from March 1952 until January 1959. It was a dictatorship which was supported and supplied by the USA. A diplomatic row resulted in the suspension of arms sales in March 1958. The reasons for this row are down to Batista having broken an agreement which prohibited the use of US-supplied weapons for internal problems. Additionally, there had been American pressure to hold free elections, however, Batista was against this as it would result in him losing his tight grip on power. As a result, a new arms supplier had to be found and a few nations were approached, including Italy, the Dominican Republic, Nicaragua, and the United Kingdom.

The Batista Government approached the British Government of Prime Minister Harold Macmillan. Desperate for money, the British agreed in May 1958 to the sale of 15 A.34 Comet tanks from their stocks in addition to 17 Hawker Sea Fury fighter aircraft. This was only supposed to be beginning of a much larger trade deal which was supposed to include substantial sales of non-military equipment too, such as 620 Leyland buses and the deal to construct port facilities at Mariel, for which the UK would receive a very rewarding and much needed US$10 million.

Fidel Castro, then a Revolutionary-in-hiding in Cuba as part of the ‘26th of July Movement’, was clearly unimpressed at what he saw as the British supporting a dictator and urged a boycott of British products in Cuba. He was still busy waging a guerrilla war against the Batista regime and in 1959 would eventually overthrow it.
This was the least of the political problems for the Conservative Macmillan Government. The Labour MP Hugh Delargy directly asked Mr. Selwyn Lloyd, the Secretary of State for Foreign Affairs, on the 19th November 1958 about this deal and that he was, in effect, now supporting a repressive regime. Under serious political pressure from the opposition, the Government agreed to a suspension of further arms sales to Cuba, starting on the 15th December 1958 which would give the original order enough time to arrive in Cuba. Unfortunately, and to the embarrassment for the government, the ship arrived 2 days late on Havana, having been delayed on route. The 15 Comet tanks and 12 Sea Furies arrived in the troubled island on the 17th December. The Revolution in Cuba was nearly over too by this time, and the Batista Government was overthrown on the 1st January 1959. This meant that the British government had not only not managed to sell arms to Batista, but allowed these arms to fall into the hands of a Revolutionary regime right on America’s doorstep.
Washington was clearly not impressed by this turn of events and, alongside the UK, it was agreed that all future sales to Cuba would be suspended from March 1959, although both the UK and USA still supplied material to Havana, including the 5 remaining Sea Furies from the UK and 5 helicopters from the USA, which arrived in May and June 1959 respectively. 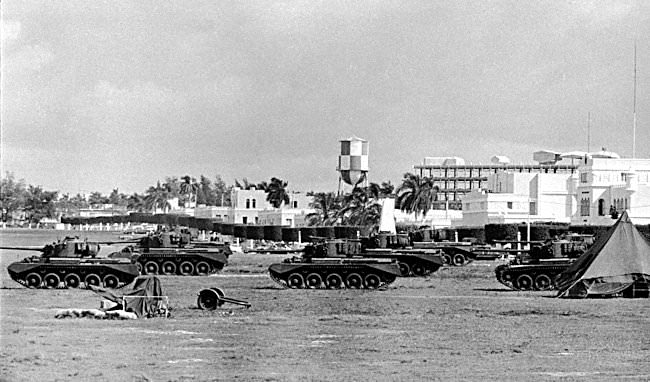 At least 8 of the 15 Comets supplied in 1958 can be seen in this image taken at Havana Airport during the last days of the Batista regime – Photo: Unknown

It is unknown if any markings or a specific paint scheme covered the Cuban Comets although at least one is seen in photographs in Havana to still sport the original Allied white recognition star. As such, this illustration, by Tank Encyclopedia’s own David Bocquelet, shows a Comet in a fairly standard Olive Drab colour, as used on many WW2 British Tanks.

As it was, the 15 Comets delivered on the 17th December 1958 remained in service for a very short time. Despite rumors that some were used in the Battle of Santa Clara at the end of December 1958, there is no information to substantiate this, and it seems very unlikely given the short time these tanks were available to Batista’s troops for training on them.
Even though Castro might have disliked the British for supplying arms to Batista, he was not upset enough not to request US$490,000 worth of credit from the Ministry of Supply for further armaments in January 1959. Sometime between March and August 1960, Cuba requested additional stocks of 77mm ammunition for their Comets as well as spare parts, though these, as of December 1960, were still not provided (nor a decision made on supplying them) by the Foreign Office. The request for further stocks, spares, and ammunition, suggests that the Comets may have been destined for a longer life with the armed forces of Cuba. With arms suspended from the UK and USA though, the new Cuban regime looked to the Soviet Union instead and with stocks of tanks from them available, getting more British tanks or spares was simply unnecessary. With that, the Comets appear to have simply been scrapped. 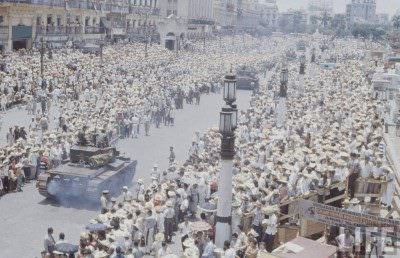 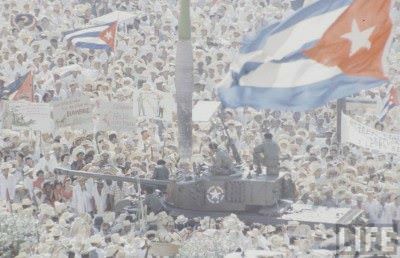 Comet tank with original white Allied recognition star heading through a crowd in Havana, Cuba. Source: Life Magazine.
In April 1960, with Castro now looking to his Communist allies in the Soviet Union for support, he requested military aid from them and, in October that year was supplied with T-34/85 tanks made in the Soviet Union and Czechoslovakia. These new Soviet tanks replaced the existing Comets, meaning that they were in service for just under two years.

At least two Comet relics survive in Cuba. One at an as-yet-unidentified location which seems to be a dug-in defensive position with a damaged muzzle brake, which serves as a popular place for children to climb. 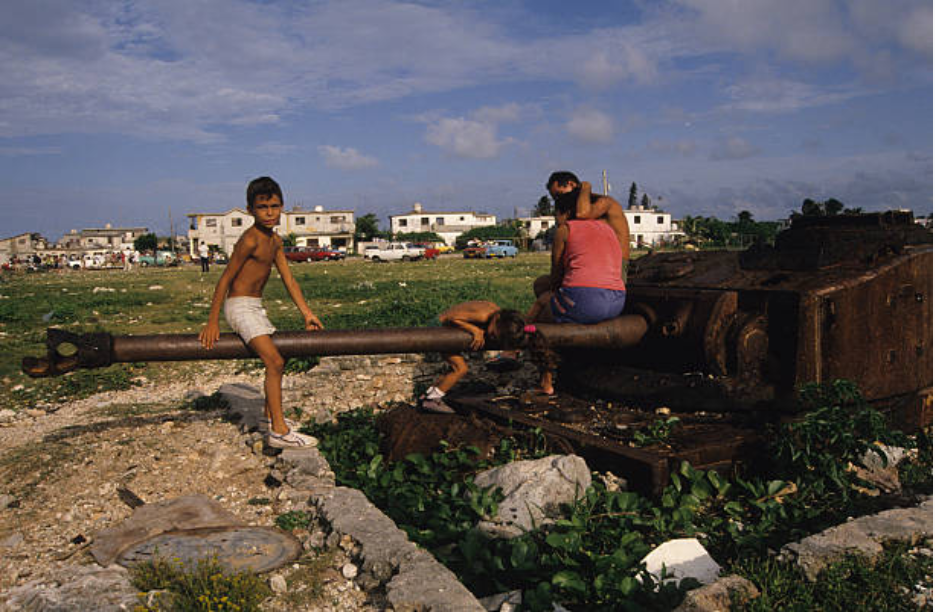 Comet tank with damage muzzle brake in what appears to be a prepared defensive position. Photo: gettyimages.com
The other, painted pink, is in the jungle, bearing a sign misidentifying it as a Sherman tank. Allegedly, this vehicle had been kept for a time as a gate guardian monument at Castillo San Salvador de la Punta until 1986, when it was moved to a botanical garden called El Progreso in Havana’s Bahia neighborhood, across from the Havana Bay Tunnel. 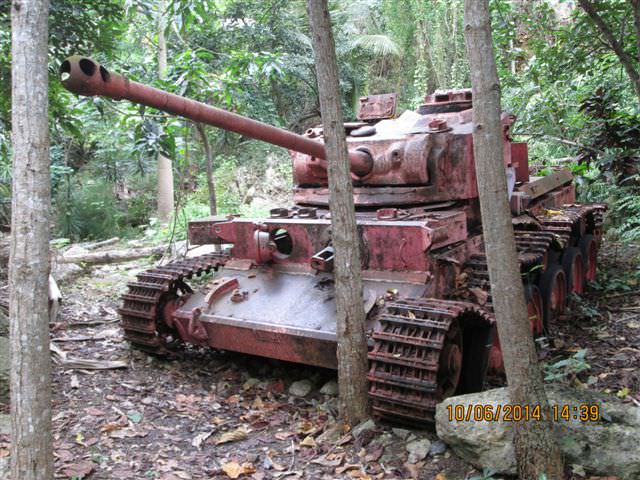 Surviving A34 Comet bearing serial number 3642 is a survivor of the 15 supplied to Batista in 1958. Now painted pink by local farmers but otherwise in surprisingly good condition. Photo: jimmyjamjames on imgur

4 replies on “A34 Comet in Cuban Service”

7.92 Mauser wasn’t a pre-NATO standard as such, although the British had tried to replace the .303 with a rimless cartridge as far back as WW1, they never managed to get the right circumstances to do so until they converted to 7.62 NAT0. The reason for the 7.92 MGs on British tanks is actually quite simple.
The Comet and other WW2 British tanks were Fitted with the BESA MG, which was a licensed version of a Czechoslovakian MG (the ZB-53) selected in the late 1930s to replace the heavier Vickers water cooled MG on British tanks. The standard ammunition of the Czechoslovakian Army was the 7.92 (often just called 8mm) Mauser rimless cartridge, hence the ZB-53 and BESA were also chambered in 7.92. It was considered by the British Army and War Office that redesigning the BESA to use the .303 rimmed cartridge was too expensive and time consuming, and that because the Royal Armoured Corps already had its own separate supply chain the need to have common ammunition with the other branches was not important.
-TE Moderator

Great article, and I love the Comet, Cromwell and Centurion. Just one tiny correction. 33.5 tonnes is somewhat more than 32.7 long tons. 1 metric ton is equal to 0.984 long tons, so 33.53 metric tons (or tonnes) is equal to almost exactly 33 long tons (33.0004448 long tons to me even more exact. What a big nerd I am). Cheers from Chile, and keep up the great work! I wish you could do a piece on the IMI 60mm hyper-velocity gun that equipped some tanks in the Chilean army. There is very little information about it, but you have better access to information than I do. It could pierce a T-55 at fairly distant ranges and had an extremely tense trajectory, or at least so much was claimed.