Due to the outbreak of the Syrian Civil War after an escalation of violence on March 15, 2011, development was halted. Production resumed during the war by Syrian Arab Armed Forces troops in specialized workshops.

Genesis of the Syrian Artillery

According to military expert Yuri Lyamin, a self-propelled gun on the frame of an 4-axle truck armed with a 130 mm gun was already in development before 2011. It can be assumed that the project was influenced by the Cuban self-propelled guns of the Jupiter series, officially presented to the world in 2006, since the Republic of Cuba and Syrian Arab Republic still maintain close international relations today.

It is also possible to assume that the development of the SPG was shelved after the outbreak of the Civil War, as the Syrian state needed most funds to finance the war.

With the beginning of the Civil War in 2011, the fragmentation of forces and the loss of huge quantities of material ending up in the hands of the rebels, the Islamic State, or destroyed in combat, it was necessary to put a self-propelled gun into service as soon as possible. The result was a 130 mm M-46 Field Gun on an IVECO TRAKKER chassis, with great off-road capability and an unrivaled (in the conflict) firing range of 27 km with standard rounds.

The chassis on which the Syrian wheeled self-propelled gun is based is the chassis of the heavy IVECO TRAKKER 8×8 420 produced by the Italian company IVECO Veicoli Industriali (Industrial VEhicles COrporation). It has a sturdy chassis and good off-road capabilities.

The truck comes in different configurations: heavy duty truck, tractor unit, fire truck, and worksite vehicle. It can be equipped with different engines with different horsepower outputs too, from the least powerful at 360 hp for the 4×2 to 560 hp in some 8×8 vehicles.

This powerful heavy duty truck, produced for both the civilian and military markets (the Bundeswehr has ordered 1,048 in the Geschützte TransportFahrzeuge or GTF version in January 2021), has excellent performance with reduced costs and consumption. The naming convention for this truck is rather simple, being composed of the cabin type, the horsepower output of the engine, and the drive type (8×4 or 8×8).

The engine of the Syrian TRAKKERs is the IVECO Cursor 13, a 6 cylinder in-line engine with a 12.88 liters capacity, delivering 420 hp at 1,900 rpm. The truck has a 1,200 liters fuel tank, with fixed geometry supercharging and a Waste-Gate (WG) valve.

Its total weight is 1,345 kg. It is liquid-cooled with 4 valves per piston. The engine is equipped with Electronic Diesel Control (EDC) and a Fixed Geometry Turbo with Aftercooler (TCA). The engine also complies with the European Euro VI emission standards.

Of the four wheel axles, the first two are steered in order to reduce the turning radius. The maximum weight of the vehicle (loaded) is 72 tonnes according to the regulations of the Italian laws. The self-propelled weighs less than 30 tonnes with the modifications and the gun mounted.

The transmission is a German-built 16 gears manual ZF-16 with reduction gear.

The IVECO trucks used by Syria were probably purchased from Libya, which produced them at the Libyan Trucks and Bus Company in Tripoli. From photographic evidence, at least 4 such SPGs have been produced on the chassis of this truck.

Another version of this self-propelled gun is based on the Mercedes-Benz Actros 4140 8×4 chassis.

The cab of the Mercedes-Benz Actros 4140 is a model ‘S’, designed for everyday use, with a width of 2.50 meters, a total height of over 3 meters, and a length of 2.30 meters. The maximum weight of the vehicle is 44 tonnes full load. The transmission is semi-automatic, with a 16-speed gearbox.

It is unclear how many SPGs have been produced on the Mercedes chassis in Syria. Photographic evidence shows that there are at least four different vehicles with differences between them regarding cab protection.

The 130 mm M-46 Field Gun SPG keeps the chassis and the cabin of the truck unchanged, removing only the cargo bay.

The cabin is kept intact, except for the removal of the rear view mirrors. The cabin is covered by an armored structure that protects it on each side. This has a simple square construction with two side doors without slits. These can be opened to the back. On the front, there were two hatches for inspection of the engine compartment, with grilles for radiator cooling. Two more hatches in the front cover the windscreen, with slits for the driver and commander. The two hatches are lowered while driving for better visibility.

A very serious problem on TRAKKER chassis vehicles is the absence of rear-view mirrors and side and rear slits. This inability to see beyond the frontal arc of the vehicle causes problems when driving with a convoy or on congested roads with civilian vehicles.

The self-propelled guns on the Mercedes-Benz Actros 4140 hull have both a fully covered cab and two side hatches on the side doors, which can be lowered to allow the driver and commander to have a side view as well.

At least three self-propelled guns on a Mercedes hull have been armored only partially. The armor plates cover only the front windscreen and the upper part of the doors and the rear, leaving the rest of the cabin uncovered. 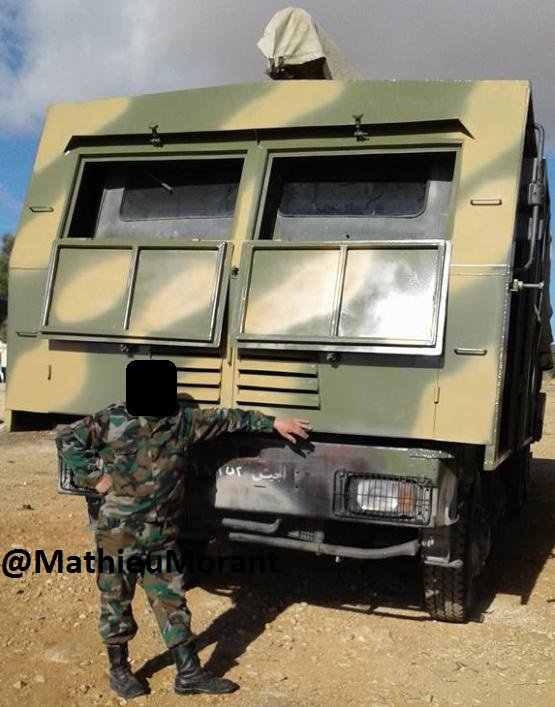 There also appears to be a large box between the two rows of ammunition boxes, but the purpose is somewhat uncertain. It could be used to transport spent casings or to transport the crew’s personal equipment.

Finally, on the back of the vehicle, is the gun mounting in the center. The left side has a walkway for the crew to operate around the gun, while on the right side is a box, probably for spare optics.

On the sides, some vehicles have some supports for rods used for waterproof sheets. These can be used to protect the cannon from the sand. Behind the gun are two hydraulic jacks connected to a spade that is lowered when the self-propelled gun is in position.

The spade lifts the two rear axles off the ground and also the second front axle, decreasing the recoil stress transferred to the truck frame. The spade also has two steps to facilitate access for the gun loaders.

Generally, photos show the vehicles loaded with the crew’s personal items, waterproof sheets to cover the vehicle from the weather and sand, and barrels or bottles of water.

It has a horizontal sliding-wedge breech and hydro-pneumatic recoil dampers. Syria had received around 650 pieces from the Soviet Union during the 1950s and the 1980s and another unknown quantity from Egypt, which even today produces a variant of the M-46 as the M59-1M. The M59-1M is actually a license built Type 59-1, which in turn is the Chinese license build of the M-46.

The Chinese and Soviet models have different carriages. The Type 59-1 has the carriage of the Type 60 (a copy of the Soviet 122 mm D-74), but the cannon and the breech remain identical.

Keeping the original mounting, the gun has an elevation of +45°, while the original depression of -2.5° is no longer possible due to the vehicle cab. The artillery piece, despite losing the wheeled carriage, probably maintains a limited traverse of 25° to either side. Firing at higher traverse angles would probably cause the vehicle to become unstable and overturn.

The gun could be equipped with an OP4M-35 direct fire sight with a field of view of 11º and a magnification of ×5.5 or an APN-3 active/passive night sight, but these are probably not used given the lack of direct fire ability due to the lack of depression.

The driver and commander sit inside the cabin (on the IVECO, while on the Mercedes-Benz, there are three seats inside the cabin). The other crewmembers must be transported in another vehicle that probably also carries more ammunition for the gun.

The M-46 weighs 2,780 kg without the wheeled carriage and the shield. Its rate of fire is probably as on the standard M-46 field gun, from 6 to 8 rounds per minute.

Due to the improvised nature of the vehicles, the stability of the chassis is severely strained during shooting, despite the spade lifting the vehicle. In some photos, parts of the armor plates are absent, as the shock from firing blew them off.

The vehicle carries four boxes of ammunition, for a total of 24 rounds, with another four boxes with separate charges. On top, behind the ammunition boxes, more crates of ammunition are sometimes carried. This solution allows the crews to carry a few more rounds on each vehicle.

The M-46 can fire different types of projectiles developed over the decades, not only by the Soviet Union, but also by Israel, China, Vietnam, and Iran. These are mainly High-Explosive (HE), High-Explosive Fragmentation (HE-Frag), Armor Piercing (AP), Rocket Assisted Projectile, Illuminating, and Smoke shells.

The separate charge casing has a dimension of 130 x 845 mm R. The Syrian SPGs could fire a wide range of 130 mm ammunition:

Very little is known about the service of the 130 mm M-46 Field Gun on IVECO and Mercedes-Benz chassis. Some were spotted in Damascus during the Battle of Damascus from July to August 2012 and in the Battle of Aleppo in 2016, where they mostly hit ISIS (Islamic State of Iraq and Syria) positions, but also Free Syrian Army rebel units that were fighting against President Bashar Al-Assad.

In mid-July 2017, they were used against ISIL (Islamic State of Iraq and the Levant) terrorists in the Eastern Hama region. The vehicles were photographed in both monochromatic sand yellow and a two-tone camouflage composed of dark green with sand colored patches.

One photo from 2017 shows as many as 6 self-propelled guns lined up in the desert, some with two-tone camouflage and others monochromatic.

Although the exact operational history of these vehicles is unknown, some conclusions can be based on the scant online information.

The wheeled self-propelled guns on IVECO and Mercedes-Benz chassis are economical, easy-to-modify, low-consumption, and low-maintenance vehicles. The modification also made the 130 mm M-46 Field Gun much easier to deploy, being carried on an 8×8 truck with decent off-road characteristics and high speed instead of being towed by a slow prime mover.

These W-SPG provide Syrian ground troops with adequate artillery fire with a maximum range of 44 km, but it is unclear how many were built and if they will be maintained following the end of the Syrian Civil War, whenever that may come.