Since the US occupation of Japan, and its following constitutional alterations denouncing war, the Japanese Ground Self Defence Forces (JGSDF), part of the JSDF, was established.
Being in a hotspot of communist neighbors, Japan was firmly under US military assistance, traduced by a massive supply of US-built weapons, including tanks like the M4A3E8 Sherman and M24 Chaffee. By the early 1960s, not only were they considered too large for the average Japanese service man (especially the drivers), but the M4, in particular, was becoming obsolescent. If the M24 Chaffee manned by Japanese crews did well in Korea but suffered badly at the hands of Soviet-built North Korean T-34-85s.
Though JSDGF were given the option of purchasing M47 Pattons, They chose to develop own domestic tank in 1954. For this, they turned to their most trusted tank manufacturer and industrial giant, Mitsubishi Heavy Industries. The firm soon turned out the Type 61 (61式戦車), Japan’s first Main Battle Tank.

The original requirements called for a tank small and light enough to be carried by train on standard platforms; but also a maximum of 25 tons, and a 90 mm main gun. During the initial development phases, the weight was raised to 35 tons in order to have an adequate protection. The full development really started in 1955, with the first prototype STA-1 delivered in December 1956, and the others in February 1957 (STA-2), January 1960 (STA-3) and November 1959 (STA-4), with tests improvements in each one. By 1961, the STA-4 was chosen. This prototype would become the production model, with the production of the Type 61 starting in 1961.

STA-2, one of the Type 61 Prototypes. Photo: – JGSDF Maniacs
At first, the production rate was slow, with only ten delivered in 1961 with ten more built in the following years. Thirty more were built in 1965, with production gradually climbing up to 1970, with a total then of 250 machines. Production ceased in 1975.

The hull was conventional, welded, with a three-sided front slope and well-sloped sides. The catwalks were quite reduced, and fasteners for additional equipment and storage were welded to the side slopes. The turret was cast, rounded at the front, with a conventional mantlet housing the main gun and coaxial M1919 machine gun, and a long rear bustle with pronounced overhang. Additional storage was often mounted behind, and later on, smoke dischargers welded on its sides. A rather large hemispheric commander cupola was mounted over the turret, topped by a single mount for a 12.7 mm (cal.50) M2HB heavy machine gun. 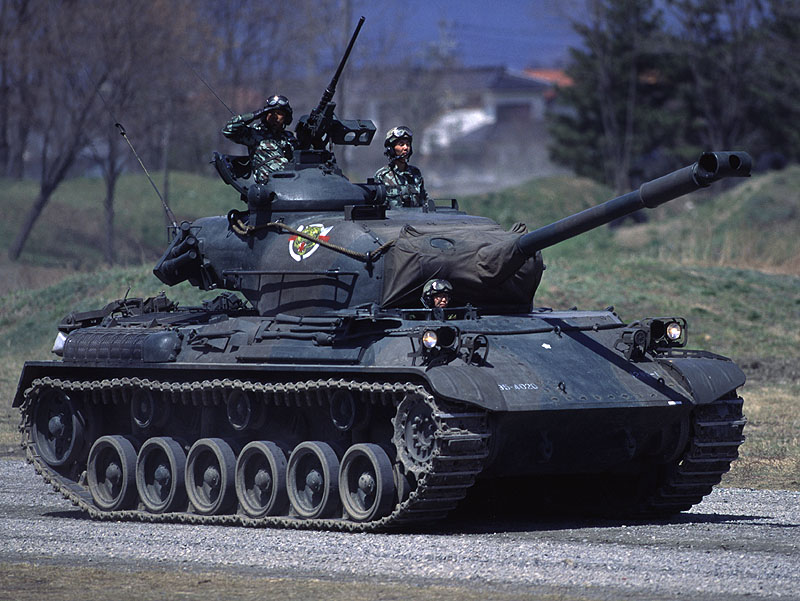 The driver sat on the right and had a hatch surrounded by three periscopes, one facing front and two facing the front side corners. The transmission was on its left and could be accessed by removing a panel. The domed commander cupola comprised four vision blocks angled upwards, with a stereoscopic rangefinder with x7 magnification. The gunner had an x6 magnification periscope, as well as an x6 magnification sight.
The chassis and drivetrain were somewhat inspired by the M24 Chaffee, but counting the same number of roadwheels than the Pattons (six). The roadwheels, drive sprockets (relocated at the front), idler, and return rollers were all tailor-made for the Type 61, although the tracks were similar to the US type. The suspensions were torsion bars, with four shock absorbers, to the front and rear roadwheels pairs per side.
The 90 mm was also of US inspiration with a characteristic T-shaped muzzle brake, but of Japanese manufacture by Japan Steel Works, as the Type 61 L/52 rifled cannon. It had a muzzle velocity of 910m/s (with M318AP-T ammo). There was a small hatch with a flap for ejecting spent shells to the right of the loader. 18 rounds were stored in the rear bustle, while the others were distributed inside the hull. The radio was also mounted into this bustle.
The engine was a Mitsubishi turbocharged 12HM21WT 4-stroke V-12 cylinder vertical air cooled diesel, giving 570 hp @ 2100 rpm, and had a 29600 cc capacity. As customary in previous tanks design by Mitsubishi, the exhausts pipes were located on either side. 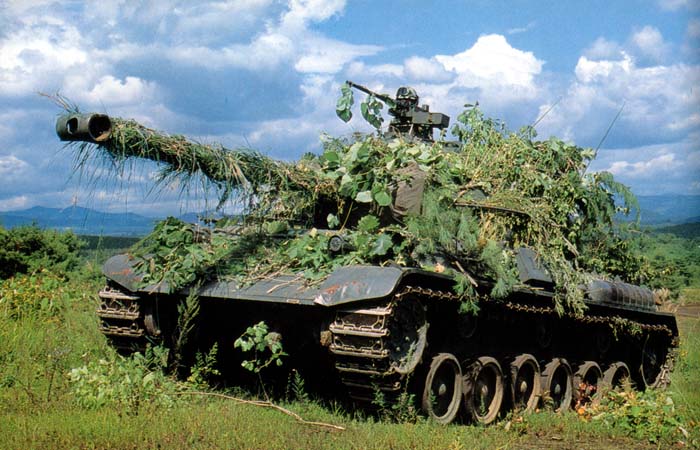 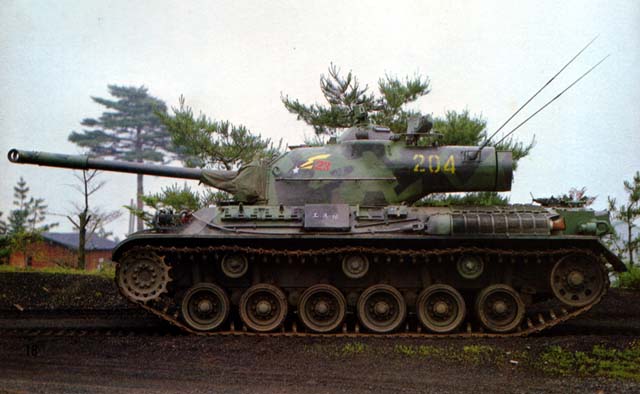 A Type 61 with one of the JGSDFs unique camouflage schemes.

The 4 man crew of the Type 61 stand atop their vehicle on maneuvers. The JGSDF flag waves from the top of the Tank.

There were shortcomings with this first series, like the lack of NBC protection or tight hull which cannot receive a fording equipment. The other major drawback was the absence of a gun stabilizer to proper fire on the move. The lack of operational range was another one. 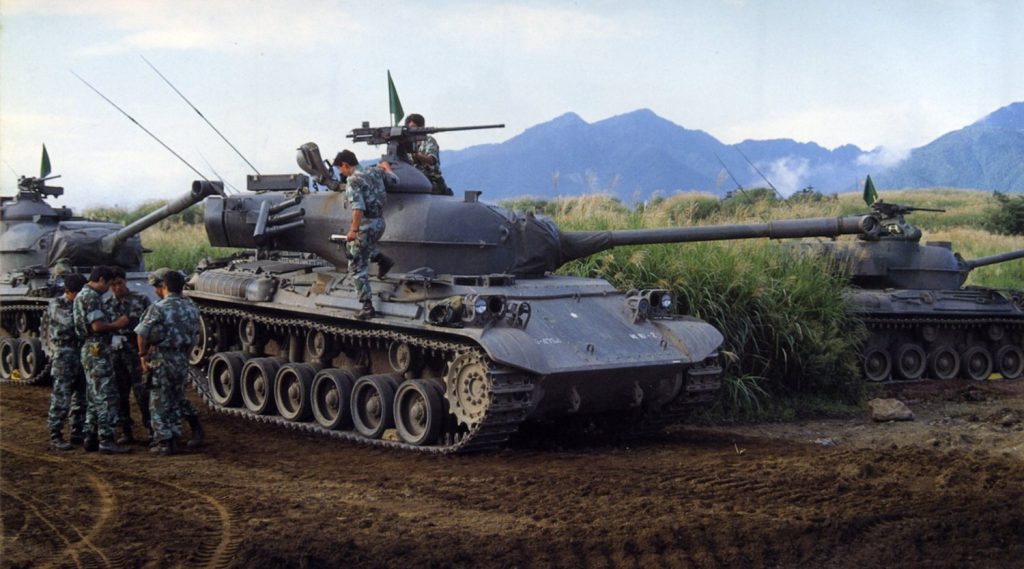 The Type 61 Taking part in training.
By the time the Type 61 was accepted into service, the Korean war was over, the active lifetime of the Type 61 was spent at in the home islands. The long production run meant that these vehicles were kept in service until the end of the Cold War with numerous upgrades keeping them somewhat up-to-date. Including FCS, infrared searchlights, smoke dischargers.
By 1975, a better model, the Type 74, was already scheduled for replacement. The Type 61 continued to be used in training with US armored divisions until the end of 1990s.
Two variants were built, the Type 67 AVLB (Armored vehicle launch bridge) and the Type 70 ARV (Armored Recovery Vehicle).

All illustrations are done by Tanks Encyclopedia’s own David Bocquelet.

Hello Spartan, it was a small typo.
Thank you for noticing this!

At the end of the second paragraph, the sentence ” If the M24 Chaffee manned by Japanese crews did well in Korea but suffered badly at the hands of Soviet-built North Korean T-34-85s” is hard to read and has an unclear meaning. Does it mean that the Japanese M24s performed well overall in Korea, but suffered against the T-34-85s?