As the United States army entered World War II, it drew certain conclusions from Germany’s quick victories over Poland and France. One was that a highly mobile tank destroyer force needed to be held in reserve to deal with sudden Panzer breakthroughs as they occurred, rather than keep anti-tank forces at the front.

Therefore, anti-tank elements were removed from infantry divisions to form independent battalions, which were initially equipped with a number of improvised mobile tank destroyers, the M3 half-track mounting a 75 mm (2.95 in) gun, and the GMC M6, a truck with a 37 mm (1.46 in) gun. 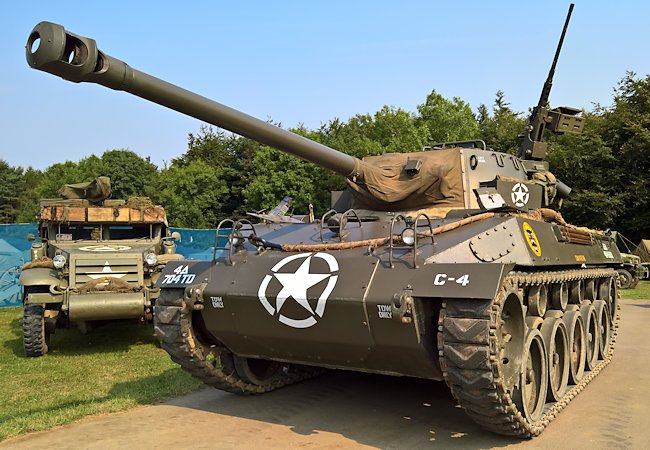 Restored M18 GMC Hellcat tank destroyer at the Military Odyssey event in southern England.
Once Operation Torch provided battlefield experience for the army to evaluate, it became apparent that more powerful tank destroyers would be needed. First of the more powerful weapons was the M10, built on the chassis of an M4 armed with a 76.2 mm (3 in) gun. However, the M10 was still insufficient, so an order went out for a tank destroyer designed from the ground up to hunt and destroy tanks. This vehicle would become the M18 Hellcat.
In December 1941, the Ordnance Corps issued a requirement for a fast tank destroyer using torsion bar suspension, a Wright/Continental R-975 engine, and a 37 mm (1.46 in) gun. This became the T42 37 mm (1.46 in) Gun Motor Carriage. The army then changed their request to a vehicle mounting a 57 mm (2.24 in) gun, thus the designation changed to the T49 57 mm Gun Motor Carriage. Yet another change, requesting a 75 mm (2.95 in) gun, led to the T67 Gun Motor Carriage, of which one was built from a T49 chassis.
Finally, the T70 76 mm Gun Motor Carriage emerged and would become the M18 Hellcat. It was designed by Harley Earl at Buick. Tests on an oval track, as well as a specially designed bumpy track, demonstrated that the lightly armored vehicle could achieve high speeds. Production of the M18 started on January 7th, 1943, when 1,000 units were ordered.

Speed and agility were the hallmarks of this particular tank destroyer; these qualities came about from using a powerful engine and by keeping armored protection to a minimum. As was the case with other tank destroyers used by the United States, the M18 had an open turret, which left the crew vulnerable to snipers, grenades, and shrapnel.
Rarely was the high speed of the Hellcat fully used in combat, but the ability to outflank German tanks, for side and rear shots, did benefit the crews against the heavily armored Panther and Tiger tanks. Ease of maintenance came from the engine being mounted on steel rollers, which permitted quick removal and replacement. The transmission was also easily accessed in this manner. The 76 mm (3 in) gun soon proved to be not as effective as hoped against German armor, although a limited supply of high-velocity armor piercing ammunition did compensate to some extent.
The crew comprised five members, the commander in the turret left rear, gunner in the turret left front, loader in the turret right, driver in the left front, and assistant driver in the hull right front. The armor consisted of rolled and cast homogeneous steel, as follows: Gun shield .75 inch (1.9 cm) from 0-60 degrees; Front (cast) 1 inch (2.5 cm) 23 degrees; Sides .5 inch (1.3 cm) 20 degrees; Rear .5 inch (1.3 cm) 9 degrees; Top (none); and floor 0.25 in (6 mm).
The main armament was a 76 mm (3 in) M1A1, M1A1C or M1A2 gun with 45 rounds. It had a 360-degree manual and hydraulic traverse at 24 degrees/second, +20 degrees to -10 degrees of elevation/depression. The secondary armament comprised a .50 (12.7 in) caliber M2HB machine gun in a ring mount (800 rounds), rotating 360 degrees, with manual traverse.

In July of 1943, the Hellcat went into production at the Buick plant in Flint Michigan. Although Buick was contracted to build 8,986 Hellcats for the US army and Lend-Lease recipients, only a total of 2,507 vehicles were produced, with production ceasing in October 1944.

There were a number of variants tested using the chassis of the Hellcat. The T86 and T86E1 amphibious tank destroyers, as well as the T87 105 mm (4.13 in) amphibious Howitzer Motor Carriage, the T88 105 mm (4.13 in) Howitzer Motor Carriage and the Super Hellcat mounting the turret from the M36 turret were all tested, but none proceeded to production before war’s end.
The only variant of the M18 to see production and combat was the T41/M39 armored utility vehicle, used as a turretless personnel or cargo carrier and as a gun tractor. M39s saw service in both World War II and Korea, before being declared obsolete on February 14th, 1957. A prototype of the M39 was tried as a flame thrower tank, the T65. It did not go into production.

Sources & Links about the M18 Hellcat

Camouflaged Hellcat at Anzio, May 1944. The camouflage scheme is deduced from a picture from the front.

Hellcat from the 805th Tank Destroyer Battalion in Italy, 1944.

“Super Hellcat” in 1944, with an olive green/dark brown camouflage

Seek, Strike, and Destroy your opponents with this Hellcat of a U.S. tank destroyer! A portion of the proceeds from this purchase will support Tank Encyclopedia, a military history research project. Buy this T-Shirt on Gunji Graphics!

This is one of my favorite tanks

Hello love this site. Here’s my question, what was the most popular/most used tank destroyer among the Allied armies?

Western Allies?
Probably the M36 or the M18

Actually the Jackson because it has more armor than the wolf and hellcat.

Why would they design an open turret. With the light armor protecting the hull of the tank, they could’ve, should’ve encased the turret. I understand the field of view is better with an open turret.
The Abrams could’ve used the help.

I meant to say the Abrams could’ve used the help. The Abrams doesn’t need any help!

Dammit! I’ll try again the SHERMAN could use help.

Agreed, it makes no sense to design an open turret. That means any enemy soldier that has the high ground and a decent gun could take out the crew.

They were designed as tank destroyers (mobile antitank guns) and the doctrine was for it to stay back in your territory wait for a panzer penetration, move fast to good positions, and ambush them. The open turret served the purpose very well. But we know few of those battles actually occurred. Instead, they were repurposed to front line infantry support rolls.

Open topped turrets in general not only provide a better view for the crew, but also have less weight. With the Hellcat, this was important because of the design on the tank; it was designed to go at high speeds to outflank it’s opponents. While it’s just a hunch of mine, I also believe that open-top turrets are easier to make and cost a little less.
Some open-top turrets did get upgraded to have a proper turret covering. Crews for open-topped vehicles would sometimes stretch canvas over the turret/hull, and the M36 Jackson got a steel turret roof after WW2.

Maybe an article on the Type 64? *wink*wink*nod*wink*

It’s in the works, but a release date is not set what so ever.
-TE Moderator

could you make a Avenging Angel M18?

Yeah, how does the hellcat go that fast, it would have gone as fast as modern tanks?

The M18 is a comparatively light vehicle, it only weighs about 17-18 tons but still has about a 400 horsepower engine, compared to an M4 medium which weighs about 30-33 tons with the same engine.
TE Moderator

The M4, M4A1 and M18 all used the same Continental R-975 radial engine producing 350-400 horsepower (depending on if it was the C1 or C4 model). Yes it was originally designed for aircraft, but the defining trait of an aero engine is usually higher RPM, not higher horsepower. With the same engines an M4 has a power to weight ratio of 10.46–13.49 hp:ton while an M18 has a ratio of 19.8–22.6 hp:ton. In short its the same engine pulling less weight, just like how a car with a loaded trailer will go slower than a car without.

how much money did it take to make the tank and how much would it sell for today.

We don’t have a number on what it cost back then, but well maintained running vehicles can go up to $300,000

Does anyone have a source which tells me the speed of the turret traverse ? I find nothing to this. Not a single website seems to have this information

Definitely in my top 5 favorite tanks ever

This is an extremely cool looking Tank, and was as equally deadly to the enemy

Google Translate: Venezuela in 1953 acquired 40 M 18 and assigned them to the armored battalion “General in Chief Jose Francisco Bermudez” stationed first in the city of Caracas and then transferred to the Lara state, in the west of the country. step to be retired from active service in 1988 and stored. in 1991 yugoslavia presented a proposal to modernize the M 18 but it was rejected