This modernized version of the 221 appeared when the needs of the army evolved and required a better design. First, the hull shape and internal structure was rearranged. There was a step down behind the turret – which was larger and 10 sided – and the rear was now pyramid-like. It was longer, and since heavier weapons were to be installed, the chassis had to be strengthened. It was rebuilt from scratch and had no relationship with the former commercial chassis. The production, assumed by Weserhütte, Schichau, MNH, Büssing-NAG and Horch, started in 1936 and ended in 1943, and was quite numerous, with no less than 1800 vehicles (according to some sources) in seven series.
The first one received the usual MG 34 machine-gun and the turret top, still open, was protected by an anti-grenade mesh in two pieces. But the main improvement was the lightweight Rheinmetall 20 mm (0.79 in) autocannon -the weapon of choice of German armored scout vehicles. The 20 mm (0.79 in) and the MG 34 were coaxial. The 20 mm KwK 30 gun was fully automatic, had a 280 rpm fire rate and could fire a 5.2 oz AP shell at a muzzle velocity of 2,625 ft/s (800 m/s). It was replaced, on later series, by the KwK 38, which had a better rate of fire, 480 rpm. The series 1 to 5 received a sPkw I Horch 801 chassis with the 3.5 liter engine, and the series 6-7, the sPkw V chassis and 3.8 l engine. The overall weight rose accordingly to 4.8 tons.

Since the chassis was more robust, the protection increased and a more efficient was used. The effectiveness of the vehicle also improved, despite some limitations in off-road capabilities. The 222 was introduced in 1938 and quickly became the main German armored scout car, largely distributed to Aufklärung Abteilungs (recce squadrons) of SS units, Panzerdivisions and Motorized Infantry Divisions. There were a few in Poland, but more largely represented during the Western campaign and in France.

On a good road network they excelled, and were seen many times by Allied soldiers and officers -to their astonishment- well beyond the supposed frontline, creating panic and havoc, thanks to their speed and devastating main gun. The crews soon grew to like this vehicle, although it was somewhat cramped, and often painted non-standard personal emblems and nicknames on the hull, a favor only granted to recce squadrons, which had a strong esprit de corps.

These machines excelled in the Balkans in 1941, but in North Africa, although the Afrika Korps received lots of them, there were complaints about their lack of effective range, due to the limited volume of their fuel tanks. Many additional jerrycans were carried, fitted everywhere on the hull and mudguards. The hull itself received additional storage boxes, which also acted like extra armor. In most cases, an additional rack was fitted to the nose, receiving five more jerrycans. As the war evolved, these were gradually removed from the frontline and replaced by the Sd.Kfz.250/9 half-track (Hanomag), especially in Russia, because of their better range and off-road performance.

A handful (something like 40 to 60) were also sold to the Republic of China in 1939. In many cases, some 222s were seen bringing their firepower to assist infantry on the spot, and were especially efficient against enemy infantry and light vehicles. However, it was vulnerable to the Russian PTRS-41 rifle. Some managed to survive until 1945, affected to police operations and anti-partisan warfare in occupied territories.

This radio version was based on the 222, but for stability and practical reasons, their large turret was removed and replaced by surplus lighter 221 turrets, which were also shifted backwards. Their trademark was a large, fixed four feet bed-frame aerial antenna, and they combined long and medium range sets of radios. The 223 was produced to an extent of 550 machines by Weserhütte, MNH, Büssing-NAG and Horch from 1935 to January 1944, in two series, differing by their engine, the 8-cylinder Horch 3.5 l or 3.8 l Despite having the same problems -limited all-terrain performance and range- they served on every front until 1945 with Aufsklärung squadrons. A normal provision was one 223 for three 222s.
Few Leichter Panzerspähwagens 221/222/223 have survived to this day, but 5-6 remain in private collections, some in running condition, and at least one Czech modern day replica, based on a shortened truck chassis which received a steel frame and welded metal plates, pretty much like the original.

On Wikipedia
A video of a modern-day Czech reconstruction of a Sd.Kfz.222

Leichter Panzerspähwagen 221 converted as tank hunter with the Mauser 2.8cm sPzB 41. Some reconnaissance SS unit in the Caucasus, summer 1943.

Sd.Kfz.222 of the Deutsche Afrika Korps, recce unit attached to the XXIst Panzerdivision, Libya, fall 1941. These vehicles were criticized for their insufficient range and were literally crammed with fuel jerrycans.

Sd.Kfz.222 on the Eastern Front, summer 1941. The brownish camouflage was applied locally.

SdKfz 260, recoignisable to its single whip antenna. These vehicles were unarmed and apparently had no marking, no balkankreuz. 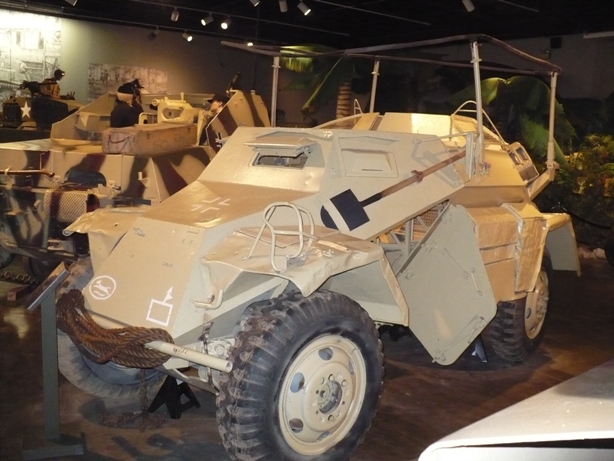 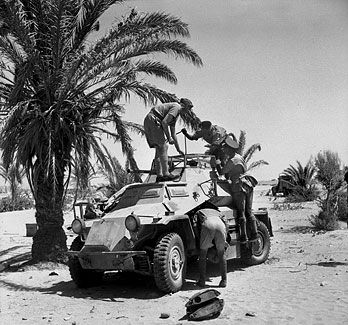 Does anyone know the purpose of the triangular hub covers on some of the vehicles?

they’re just that, hub covers to protect the hubs and bolts, other German made armoured cars had them as well, however they were replaced with a different type of wheel without the hub covers later in the war
_TE Moderator

They’re armoured shields to protect the axles from weapon damage

I am interested to know where the Fuel filler cap is situated on this series of vehicles if anyone knows
As I am currently building a diorama.

The fuel tank is on the rear right side of the engine compartment. The fuel filler is on the rear deck directly behind the turret. There is at least one video on YouTube of a sd.kfz 222 being refuelled from small cans.