Genesis of the Panzerspähwagen Sd.Kfz.250

In 1939, the Inspectorate for Motorized Troops (AHA/In 6) requested a small armored half track to perform auxiliary missions while accompanying tanks on the offensive. These were to be used chiefly for scouting, as mobile HQs, command, radio vehicles and as forward observer vehicles. They could only carry a Halbgruppe (half platoon) or section of scouts and, therefore, its size was smaller compared to the Sd.Kfz.251 Hanomag then in development.

Demag was at the time recognized for its expertise with very small half-tracks, having already developed the Sd.Kfz.10. This versatile vehicle was recently accepted in service, and 12,000 were built until 1945. Along with Demag, Büssing-NAG was chosen to design the lightweight sloped armored body. The new vehicle was named leichter gepanzerter Mannschafts-Transportwagen for light armored troop carrier, Sd.Kfz.250.

This vehicle was based on the Sd.Kfz.10’s D7 chassis built by Demag, using the same tracks, interleaved roadwheels and drive sprockets. However, it was shortened by one pair of roadwheels. The front axle was similar and was used for steering. On this slightly shortened base, a brand new armored body (panzerwanne) was conceived. The new chassis was designated D7P and each component was tailor-made for it, instead of a larger commonality with the Sd.Kfz.10. The upper and lower part of the body were sloped along a long ridge that goes upwards from the engine hood and reverses at the middle of the crew compartment, sloping down to the rear.
This gave a three-faceted hull, relatively easier to build than more complicated designs, while still optimized for bullet deflection, as the upper angle was about 35°. The lower angle was 30°, while the rear plates were angled to 17° and 45°. While the sides and rear plates were 8 mm (0.31 in) thick, the frontal armor was 10 mm (0.39 in) angled at 30° on the superstructure and 14.5 mm (0.57 in) at 12° for the hull, radiator plates and engine hood. The track mudguards were about 2/3 the total length of the vehicle and supported spare parts and tooling equipment.
The engine chosen was the same Maybach 6-cylinder, water-cooled, 4.17-litre (254 cu in) HL 42 TRKM gasoline which developed 100 hp, giving about 17.2 hp/ton, versus the 21.3 hp/ton of the lighter Sd.Kfz.10 (4.9 tonnes vs 5.8 tonnes). It was served by a Maybach SRG (Schaltreglergetriebe, Variorex-Getriebe, Hohlachse) VG102 128H semi-automatic pre-selector transmission with seven forward and three reverse gears. The clutch acted as a gear change “switch”. Top speed observed in trials on flat ground was in excess of 75 km/h (47 mph), but in practice the driver was instructed to not exceed 65 km/h (40 mph).
Both the forward wheels and the tracks were used for direction, the track brakes being engaged correspondingly when the wheels were turned enough. The double roadwheels, overlapping and interleaved (Schachtellaufwerk), were mounted on torsion arms. The rear wheels acted as tensioners. The front axle wheels were suspended by leaf springs and shock absorbers.
The driving compartment was approximately half-way, in the middle of the hull, and it was not separated from the rear compartment, which was open-topped. The driver and co-driver had lateral vision blocks and front hinged panels with armored shutters. The driver’s roof was usually equipped with a ring mount for a shielded MG 34 machine-gun. A pintle mount could be also fitted at the rear, for an extra MG 34 used for AA defense. During the course of the war, many armaments were tried and mounted on specialized variants.

The Sd.Kfz.250 was built throughout the war, starting from mid 1941, after the pre-series was successfully tested. Production lasted until the very last days of the war, at Demag (chassis), Büssing-NAG (body and parts), but also MWC and Adlerwerke for parts. A total of 6628 vehicles were delivered and modified for a wide variety of tasks, comparable to the ubiquitous Hanomag. The size was a limitation for these adaptations, but the vehicle was far more nimble and agile. It was also the only half-track in German service with a hull, and not only a simple frame, and was quite rugged.
After October 1943, production was rationalized and sped up, with more suppliers involved, and many simplifications in design. This new model was simply called “Neu Art” (new), and consisted of a less labor-intensive bodywork with simple slits instead of vision blocks, straighter armored plates and only 9 plates (vs. 19) assembled. There were also less parts overall, and the hull was characterized externally by permanent storage boxes placed along the sides. A dozen specialized variants were born from the basic design. Production figures were, for 1940/41: 1030, 1942: 1337, 1943: 2895, 1944: 1701, and 1945: 269.

The standard troop carrier/scout, armed with a frontal MG 34 protected by a mask and an optional rear pintle mount (Gerält 891). The other version was the (s MG) with two MG 34s on heavy field mountings, both with a crew-capacity of four (Halbgruppe). It formed the bulk of the production until 1942. Two hull versions can be distinguished, the “Alt” (Old) and “Neu” (New), which appeared in late 1943.

This was the telephone cable version (Gerält 892), equipped with a cable-layer which, along with the pole masts, occupied most of the rear open space.

This vehicle was to be, at first, a light AA half-track (leichter Truppenluftschutzpanzerwagen), with a twin light MG.34 mount, but it is not clear if it reached production. The same designation was also given to the Beobachtungspanzerwagen observation vehicle used by the StuG detachments, with FuG15 and FuG16 radios.

Another observation vehicle, but with additional equipment, like a scissor type periscope 14 Z Si.7, Fu15 and Fu16 radio sets with 2 m rod aerials.

The standard mortar carrier (Gerält 897), equipped with the 8 cm (3.15 in) GrW 34 mortar, fixed internally and given to the 4th platoon of each Leichter Panzer Aufklärungs companie (42 rounds in store). The (Munitionsfahrzeug) 8 cm GrW Wagen (Granatewerferwagen) was a supply vehicle carrying 66 more rounds and two MG 34 with 2010 rounds for close support. They were generally given to platoon commanders with additional radio equipment.

Introduced in March 1942. 30 were ordered and sent to Russia to replace armored cars in the reconnaissance role, armed with a 20 mm (0.79 in) KwK 38 autocannon, mounted on the Sd.Kfz.222 turret, and later received a Hängelafette 38 and FuG 12 radio. After successful operations, mass production started in May 1943.

Tank hunter version armed with the standard Pak 36 with 216 rounds of ammunition and an MG 34. These were often issued to platoon leaders.

The other tank hunter, equipped with the tapered-bore recoilless 28 mm (1.1 in) sPzB-41, with 168 rounds in store, and an MG 34 or 42, generally issued to platoon leaders. The gun carriage was also carried, so that the gun could be dismounted and used separately.

The standard ammunition carrier, with a lower superstructure at the rear (storage bay), double doors, and carrying a trailer. 30 built in June 1940, replaced by the Sd.Kfz.250/6. Used with Sturmartillerie batteries or for the resupply of Sturmgeschütz vehicles.

A specialized artillery observation vehicle with a roof and circular hatch with binocular for the observer. 25 built in March-June 1940, with a folding FuG 15 and FuG 16 aerial.

The standard 250/1 and most variants were given to reconnaissance units (Panzer Aufklärungs) working with the Panzer and Panzergrenadier divisions (28 and 18 were issued respectively). Tactically, they were used as APCs, carrying reconnaissance sections. Variants produced early on were added as organic support (artillery, AT and AA defense) for these units. Their first active commitment was during the battle of France (May-June 1940).
They saw action in the Balkan campaign (April-May 1941), as well as the whole North African campaign. Among these vehicles, Rommel’s famous command vehicle “Greif” was abundantly seen on German newsreels. The Eastern Front was their main battleground until 1944. The large “bedframe” antennas of the observation/command vehicles made them easy targets to spot and most were later equipped with light aerials (whip antennae).
The Sd.Kfz.250 was reliable, had excellent cross-country capabilities and offered a good protection against small arms fire and shrapnel, but was costly to manufacture and cramped inside. It was nevertheless produced in increasing quantities by 1944 (thanks to the simplified “Neu art”), and used until the capitulation.

The Sd.Kfz.250 on Wikipedia

An unfortunately erroneous illustration of the Sd.Kfz.250/8 Leichte Schützenpanzerwagen (7.5cm) in Russia, 1943. All Sd.Kfz.250/8 were based on the Neu type hull, not on the Alt, as seen here. 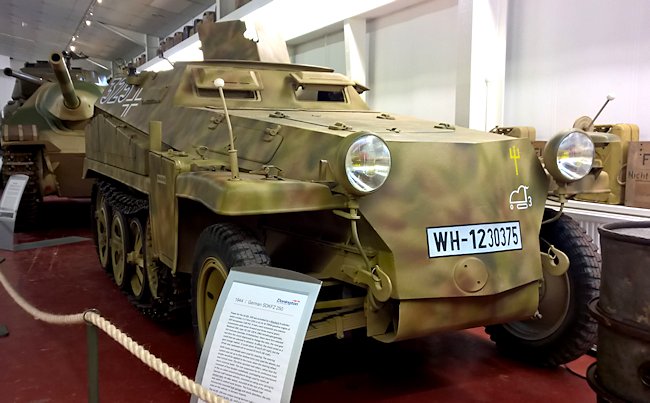 With regards to the Sd.Kfz.250/1 Neu of the 5th Panzer Division Wiking, Hungary, 1945 illustrated artwork, what evidence do you have to support this type of late war camouflage?
Thanks Simon

Will you ever answer my question?

Perhaps.
Sorry, I must have missed your comment. That illustration is old as hell (I think it predates me joining the website) and we suffered at least on catastrophic hard-drive failure in which we lost references and illustration files.
I’ll ask the illustrator, but I can’t promise a response.

What is meant by “(thanks to the simplified ‘Neu art’)”? I found nothing about it

Why is the one with pak 38 missing

The illustration of the Sd.Kfz. 250/8 is not correct. It shows the vehicle to be based on the ‘alte Ausf.’ but all ‘Kanonenwagen’ were build on ‘neue Art’-chassis.
Kind Regards

Indeed, that is a mistake. Modified the caption to reflect that. We’ll do another illustration when we’ll give the 250/8 its own article. Thank you for spotting it!

Actually the first few 250/8 WERE based on the alte model, but with the gun mounted as in the sdkfz 233 armoured car. Source: Encyclopedia of German Tanks of World War Two (revised edition) by Peter Chamberlain and Hilary Doyle , Thomas L Jentz

Please create an illustration of a Sd.Kfz.250 used in the Balkans Campaign please.

Hello Neuro,
We do not currently have the time nor the financial resources to add more illustrations to older articles.
Please consider donating on Patreon (https://www.patreon.com/tankartfund) or PayPal (Paypal.me/tankartfund) in order to help us out!

I can draw outlines for you guys to color in

That would be amazing, thank you. Could you join our Discord and leave a message in #artists to talk more?

I have a subreddit called r/NeuroDrawings, I can post outlines there.

Uhm, sure, but I’d rather we coordinate in private.

I posted a drawing on r/NeuroDrawings for David Bocquelet to color in. Make sure to make the background transparent

Well, it is a 250, and 250s do not have a roof. What happened to this one is that the museum welded on a roof to protect the interior from the elements, because it is outside.

Dear friends,
my 2015 Suzuki Jimny is precisely 3,64 meters long, has a pretty short engine compartment and will carry a maximum of four persons plus a slim suitcase in its trunk – it is impossible to fit a crew of up to six soldiers in such a short vehicle. As Fernando Leroy already states: the overall length of this long nosed halftrack should be somewhere between 4,56 and 4,70 meters, dependent on which sources you ask (and maybe the subvariant).
Best regards – and, by the way, a great website!
Schnappi

Looking for technical drawings for the Sd.Kfz. 250 ausfuehrung B

Seems like an awful lot of vehicle/money/resources just to carry 6 people around. It would cost far less to build one 251 to carry 12 then to build two 250’s to carry the same number. Maybe put the HL57 motor in it (with a slightly larger engine bay if needed) to give it more ‘umph’ for recon work.