The name Frederick Richard Simms (12/8/1863 to 22/4/1944) probably means little to anybody now as his most famous invention, his machine gun armed four wheeled bike, is commonly seen on the internet and in books usually for the purposes of humor. The man and his designs are quite real though and were no joke at the turn of the 20th Century. The modern repeating machine gun had only just started to enter common service with some armies and motor cars were a rare sight. Armored warfare at that time was so new terms we use today like ‘armored car’ had not entered the lexicon. The ‘tank’ was still more than a decade away. Frederick Simms was a pioneer of blending these emerging technologies of mobility and warfare.

Frederick Richard Simms was born in Hamburg, Germany in August 1863 to a British father and German mother. He befriended Gottlieb Daimler and moved to London establishing Simms Motors and in 1896 became a consulting engineer to the newly formed British Motor Syndicate (BMS) in 1896. In 1897, he also became a founding member of what is now known as the Royal Automobile Club of Great Britain, and in January 1898 submitted a patent for his first design of military application, namely “Improvements in Armouring or Protecting Surfaces against the Action of Projectiles” which may have been connected to his later ‘War Car’.

The first attempt from Simms to design a military vehicle was very similar to the design of Mr. E.J. Pennington. The quadricycle based ‘Motor Scout’ as he called it, is Simms’ most famous creation and it was finished in March 1899. Admittedly, in hindsight, the image of the bowler-hatted Mr. Simms on this machine is ridiculous but in the context of 1899 it is less so. Queen Victoria was still on the throne, the lessons from the slaughter of World War One were nearly a generation away and no nation could claim experience in armored warfare. Simms was taking the new “light Maxim type” machine gun and making it mobile on a cheap and simple 4 wheeled commercial quadricycle.

Most sources cite the quadricycle as being a de Dion Bouton but it appears to actually be a license-built model 1898 machine made by the firm of The New Beeston Cycle Company of Coventry which was owned by Harry Lawson at the time. The frame, despite having pedals, was also provided with a small 1.5 hp petrol engine which could drive the rear wheels via a chain and sufficient fuel for a 120 mile (193 km) range at 18 mph (29 km/h) or with a double tank for 240 miles (386 km).

The wheels themselves appear to remain the standard pneumatic road wheels rather than any kind of protected or bulletproof tire.

The machine gun, a .303 caliber Mark IV Maxim was fitted with a small bulletproof shield and, despite the pose with the gun ‘in use’ from the riding position, it was actually intended to be more of a mobile mounting from which the gun could be dismounted for use. The quadricycle frame was then to be reused as a frame on which to place a litter to evacuate wounded troops or just for moving supplies; a concept far less ridiculous than the famous photograph would suggest. If the rider wanted to use the machine gun he certainly could, it was arranged so as to not interfere with the view of the rider. Within the frame and within reach was an additional store of 1000 rounds of ammunition. The ammunition would be mounted on a rail below the machine gun between the front wheels.

Despite having produced a working example of his patented Motor Scout, the machine did not sell. The concept did sell, however, as other bicycle and motorcycle-based units with machine guns mostly for experimental purposes were formed. The fate of the Motor Scout is unknown but likely it simply got turned back into a quadricycle and sold off. Frederick Simms might not have won any contracts for his idea from the Army but he didn’t give up and he followed this small design with a much bigger design, a War Car. 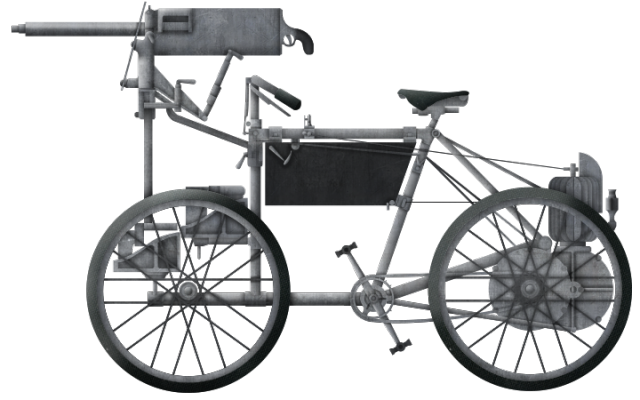 Illustration of the Motor Scout based on the original line-drawing 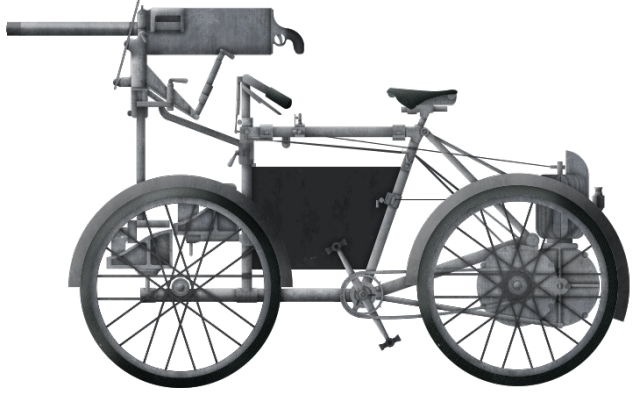 Illustration of the Motor Scout based on the historical 1899 photos added with Mud-Guards.

Both of these images were illustrated by Bernard ‘Escodrion’ Baker, and were funded by our patreon campaign.

Both pictures of Simms on his vehicle are the same, but obviously from different sources. Was this planned?

Simms was great, the guy knew what the military wanted, but didn’t exactly get the concept right in the end and instead just made a quad-cycle with an MG on it, and then put a big steel cover on it CSS Virginia style which just made it harder to use. Did Simms ever really influence the first armored cars? Like the Rolls Royce, Lanchester, and the Austin?

Hi,
A very well written article
You have listed patent numbers underneath
could I please know where you got them from