Following the successful tests of the Ansaldo Prototype Light tank in 1930 and 1931, the new suspension system, replacing the original rigid-wheel type, had shown itself to be robust and the tank had fulfilled the needs for armor and mobility. The Regio Esercito (Italian Army) would be getting these new light tanks to replace the CV29’s which had only ever been a temporary solution to the lack of a fast tank. First, though, a small number of this tank had to be made for acceptance trials. These new tanks would involve small changes from the 1931 Light Tank Prototype and, by the end of 1933, it was accepted into production as the Carro Armato Veloce Ansaldo (Ansaldo Fast Tank) of 3 tonnes, or ‘CV3’ for short. It is also often referred to as the CV33, not because it weighs 33 tonnes, but for the year of adoption. For ease of understanding the complex evolution of this vehicle which underwent numerous changes through its life, it is also sometimes classified as being the ‘CV3/33’ (Carro Veloce 3 tonne, 1933 Model) as a convenient way of distinguishing it from later models.

With the lessons learned from the trials conducted over 1929-1931, Giuseppe Rossini, the engineering brains at Ansaldo, made a series of modifications to improve on the 1931 design with the four pre-series production vehicles ordered in 1932.

The general shape and layout were retained, but changes were significant. First and foremost, the large, curved shield on the front and the large water-cooled Fiat Model 1914 6.5 mm machine gun were both removed. Instead, it had been replaced with the Fiat 6.5 mm Model 1914 aircraft (tipo aviazione) machine gun in a new mount. This was an air-cooled machine gun, meaning that the mounting for it was much smaller, as it did not have to accommodate the large water jacket on the earlier machine gun. It was also lighter but, like the other, earlier prototype vehicles, also had a separate tripod which was carried on the back deck of the tank for mounting the machine gun outside of the tank. This seems to be a simple hangover from the Carden-Loyd Mark VI which also carried a separate tripod for the same reason. This machine gun was now mounted into a new limited-traverse mounting on the front left. The machine gun had a wide field of fire as it was able to move 20 degrees in each direction horizontally and could be elevated between -12 and +18 degrees. There was space inside the tank for 3,800 rounds of ammunition for the machine gun.

The single-piece roof of the model 1931 was gone, replaced by a new roof with two large rectangular hatches cut into it. The all-welded upper bodywork from the 1931 model was retained, although the glacis now went all the way up the front of the casemate as far as the driver’s visor and was bolted down onto a frame, whereas previously this was made in two parts and was welded. The nose plate was also simplified. Rather than the heavily bolted plate and a reinforcing piece on the front of the 1931 model, this 1932 design was a cleaner plate bolted across the top edge to the frame of the tank. The towing ring was retained as a feature too but was smaller, held with 4 bolts to the nose instead of 8 as in the 1930 and 1931 vehicles (and the tractor prototype). Armor all-round ranged from 8 mm up to 14 mm thick.

Headlamps were added, one on each side, fitted to the new metal mudguards. Gone were the flimsy metal mudguards trialed on the tractor. The mudguards were now sleek and neatly fitted flush to the glacis, covering the track all the way back under the front part of the casemate. There were no mudguards on the rear. One often overlooked change was the toolbox. The semi-triangular toolbox which was located behind the drive sprocket on the prototype vehicles and tractor was moved on the pre-series to behind the casemate in front of the exhaust.

The back of the hull was changed significantly too. The 1930 design had 2 ventilation grilles on each side and more on the flat roof of the engine bay. Both were vulnerable to mud being thrown up by the tracks, and this pre-series vehicle did away with them, apart from the vents over the radiator. Instead of side and roof grilles, the air intake was moved forwards to the side of the casemate in the form of a large, rectangular multi-slat grille mounted alongside the driver’s head on the right, and the commander/gunner’s head on the left. This feature raised the air intakes, consequently improving the fording height of the vehicle and reducing the likelihood of being clogged with mud as well as providing airflow through the casemate to provide ventilation for the crew. It would also have the unfortunate side-effect that it replaced the side hatches, restricting visibility for the crew. These large side vents were dropped immediately after these four vehicles as a result.

There was little changed between the suspension on this pre-series vehicle and that of the 1931 Prototype. The front-drive sprocket had moved from the multipiece type on the prototype to a single-piece sprocket on the pre-series, and the rear supporting bracket for the rear idler was changed too. Instead of being short with a square hole and solid support wheel underneath to keep the track in place, this pre-series vehicle had a longer supporting bracket with a rectangular hole along with a single solid roller and a rubber-tire road wheel.

Power for the vehicle was supplied by the Fiat CV3-type 4 cylinder petrol engine, as was later adopted for the production vehicles. That 2.745 litre engine received various modifications to improve the power output over its production, but as it was fitted to the pre-series vehicle, it could produce 43 hp at 2,400 rpm. This enabled the tank, which only weighed 3.1 tonnes, to manage up to 42 km/h on a road and about 15 km/h off-road.

The 1932 ordered pre-series CV3 vehicles were a critical step in the development of the CV3, as they marked the conclusion of prototype trials and the final outlay of the engine bay, with the exception of the air vents which had to be moved following trials. The development process had gone fairly quickly for a tank, taking just 3 years from CV29 to the construction of the pre-series CV3/33. Trials in July 1933 had shown a few minor problems, such as the new headlamps being fouled or damaged by undergrowth, and the large vulnerable side vents in the casemate, but the design was successful and was formally adopted as Italy’s new light tank known as the Carro Armato Veloce Ansaldo. With the changes for the first production, the Series I CV3 approved, an initial order for 240 examples was ordered.

Over the course of the next several years, this vehicle would serve as the workhorse of the Italian army serving as far afield as Russia and East Africa and forming the basis of many modifications and specialist vehicles. The four pre-series vehicles would go on to be used as driver training vehicles. None are believed to have survived. 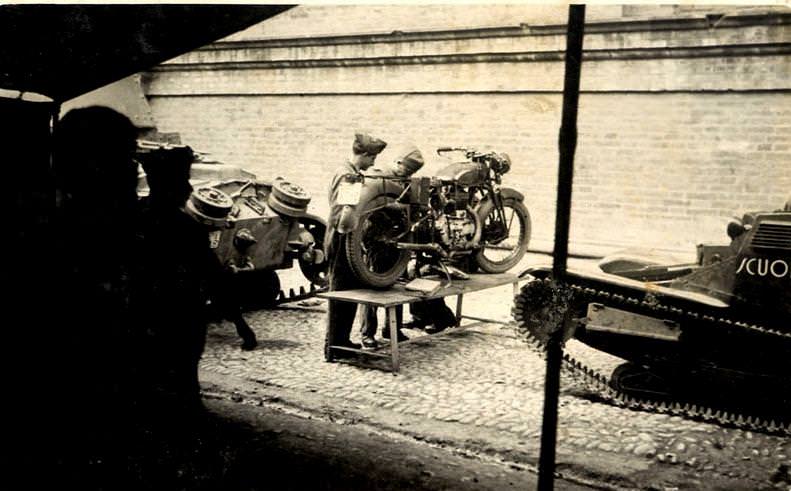 Very interesting for me, as CV-33 is one of my favourite tanks!