The AMX-10 RC first appeared in the late 1970s, in an effort to replace the Panhard EBR heavy armored car, which was then approaching 30 years in service. The project was started at the Ateliers de construction d’Issy-les-Moulineaux in September 1970. The vehicle does share some parts with the similarly named AMX 10P, but are otherwise totally different.

AMX-10 RC – Photo: Public Domain, Wikimedia Commons
The first AMX 10 RCs entered service in 1979, and the vehicle has cemented the French Army’s love for wheeled tank destroyers. In 2000, the RCs were upgraded to the Renové standard, and are expected to remain in service until 2020-2025, at which point they should be replaced by the EBRC Jaguar.

The AMX 10 RC is a 6×6 vehicle. It features a hydropneumatic suspension, which allows the driver to change the ground clearance of the vehicle. It can be varied between 21 and 60 cm, the choice depending on the type of the ground the vehicle is on.
The suspension can also be used to tilt the vehicle forward, backward or to the side, as required by the tactical necessities. The vehicle does not have any steering wheels, instead using skid steering. The principle is similar to how a tank turns, with the wheels on one side turning faster or slower to turn the vehicle.
The vehicles originally featured a HS 115 diesel engine built by Renault, which supplied 260 hp. However, the last production batches received a more powerful 280 hp Baudouin Model 6F 11 SRX engine. By 1995, all the previous vehicles were retrofitted with this engine.
The vehicle can reach 80 km/h on-road and 65 km/h and a range of 800 km. The transmission had four forward and four reverse gears. The vehicle is also amphibious, being propelled by two water jets up to a speed of 7.2 km/h. A trim vane must be erected before entering the water. The vehicle is air-transportable.
The turret of the vehicle is made out of welded aluminum, and the armor is said to protect against medium caliber weapons, meaning most 20-30 mm autocannons. The turret is called Toucan or TK105. Four smoke grenade dischargers are mounted at the rear of the turret. The turret is electro-hydraulically rotated.

AMX-10 RC – Photo: As taken from Chars-Francais.net
The crew consists of four men. The driver sits in the hull, on the left side. He can use a hatch and 3 periscopes. The commander is seated on the right-rear side of the vehicle, with a hatch above his head. He has 6 periscopes and an M398 rotatable telescope at his disposal.
The commander is able to override the gunner, and rotate the turret or aim the gun. The gunner is seated in the turret front-right. He also has 3 periscopes and a telescope, which is connected to a laser range finder.
The main gun of the vehicle is an F2 105 mm medium-pressure gun, specially designed for light vehicles. The length of the barrel is 48 times the caliber without the muzzle break. The gun can fire high-explosive, high-explosive anti-tank, armor-piercing fin-stabilized discarding sabot and smoke rounds.
These shells are not NATO compatible. Its APFSDS round can penetrate a NATO triple heavy tank target at 2000 m. This is a standard which is meant to simulate the side of a Soviet MBT, with the side-skirt, a roadwheel and side-armor being factored in. The APFSDS round leaves the gun at 1400 m/s.
38 rounds are carried in all, of which 12 in the turret. A 7.62 mm machine-gun is fitted coaxially to the main gun. Some vehicles also have a roof-mounted machine-gun.

In 1994, the French army decided to retrofit and modernize its fleet of AMX 10 RC vehicles. The intended upgrade involved a new turret and gun, applique armor and some modifications and improvements to the electronics. However, due to budget cutbacks, the upgrade was not given the go ahead.
The problem of modernizing the AMX 10 RC was finally addressed in 2000, when a contract was signed with Nexter Systems for the upgrade of 256 vehicles to a new standard. The improved AMX 10 RCR (the last R stands for Renové) is meant to remain in service until 2020-2025, when the new EBRC Jaguar will replace it.
The upgrade included the SIT-VI battlefield management system, which allows the vehicles to exchange battlefield information between themselves and with the command structure. An infrared missile jammer, the LIRE, was installed on the forward-left part of the turret, and a new thermal camera was installed for the gunner and the commander.
Protection-wise, the AMX-10 RCR has received add-on armor. Most visually notable are the side-skirts, but the front of the vehicle and the turret sides also received attention. Also, the turret was extended at the rear, creating more equipment space inside it.
The gun has received a new type of HEAT rounds. Also, a Galix system is mounted on the turret. This can fire a wide-range of grenades, including smoke, IR-decoys or explosive.
The gearbox was replaced, as was the control system of the hydro-pneumatic suspension. Furthermore, the driver can now vary the pressure in the tires, allowing him to better adapt the vehicle’s traction to the terrain. However, the added weight means the RCR is no longer amphibious, and the water jets were removed.
The first deliveries took place in 2005, and the whole retrofit program was finalized in 2010.

The AMX 10 RC has spawned a number of variants, however none have made it into production

The RP was an APC version developed in the late ’70s. The turret was removed and the engine was moved to the front, making room for 8 soldiers in the rear compartment. The vehicle was to be armed with a 20mm autocannon and a coaxial machine-gun. Most of the other features of the AMX 10 RC were kept. However, the vehicle didn’t attract any attention and was never bought. The prototype of the vehicle is currently at Saumur, not on display.

The RTT was another APC version, appearing in 1983 as a replacement to the unsuccessful RP. It was similar to the previous vehicle, but featured a GIAT Dragar one-man turret fitted with a 25 mm autocannon and a coaxial machine-gun. However, the RTT similarly failed in garnering any attention, and it was discontinued.

This was an AA version first presented at Satory in 1981. It featured a large turret armed with two 30 mm autocannons produced by SAMM. Another turret, made by Thales, was also available.

An AMX-10 RC fitted with a TS 90 turret and CS Super 90 high-velocity riffled gun. This turret-gun combination can also be found on the AMX 10 PAC 90 and Renault VBC-90.

A tracked vehicle with the RC’s turret, and sharing the same automotive components.

One of the upgrade proposals for the AMX 10 RC was the installation of the TML 105 turret, which had a new 105 mm gun, compatible with NATO rounds. This modular turret was also tested on the Vextra, CV-90 and Piranha III. The version on the AMX 10 RC seems to have some add-on armor on the sides.

An AMX-10 RC hull with the Nexter T40M turret, presented at the Satory 2013 exposition. This turret features a 40 mm autocannon, a roof mounted machine-gun and 2 ATGM pods. Meant as a demonstrator a fire trial vehicle for the turret.

Morocco ordered 108 AMX-10 RCs as soon as 1978. The vehicles supplied to them were not fitted with water jets.

The AMX 10 RCs first participated in the 1983-84 military intervention in Chad, codenamed Operation Manta. It was meant to stop the combined Lybian-rebel Chadian advance into the country.

AMX-10RC, Operation Desert Storm 1991 – Source: Dopuldepepluta.blogspot.com
Some vehicle have apparently also been involved in the UN operations in Kosovo.
After upgrading, the RCR first saw action in the Cote d’Ivoire in 2006, with the French Foreign Legion, as part of the UN peacekeeping operation there.
Two platoons of AMX-10 RCRs have also been in action in Afghanistan, in the Suroba and Kapisa regions. At least one was hit by an IED.
Two squadrons and one platoon of RCRs were also deployed in Mali during the French intervention there. The vehicles helped repel the Islamists from Northern Mali, as part of Operation Serval.

The AMX 10 RC during Desert Storm

Probably the most important operation of the AMX 10 RCs was during Operation Desert Storm. Prior to the actual fighting, however, the vehicles received some upgrades. Their front armor was reinforced, an ATGM decoy system was added, such as the one fitted afterwards on the RCR, along with a DIVT-16 thermal camera.
The 96 AMX-10 RCs were the most numerically important armored component of the 6th Light Armored Division. The division covered the left flank of the invasion force, protecting the Coalition forces against an enemy counter-attack. During the attack, also named Operation Daguet, the French forces clashed with the Iraqi 45th Infantry Division, which was defeated. The French also captured the As-Salman airfield.
The results of the fighting are impressive. Almost 3000 Iraqis were captured, with twenty enemy tanks being destroyed and two captured. Multiple other light vehicles and artillery pieces were destroyed or captured. The French didn’t lose a single vehicle, and no losses were suffered due to enemy action.

AMX-10RC from Operation Desert Storm, on display alongside an ERC-90 of the same period at Saumur Museum – Source: Vladimir Yakubov, as taken from net-maquettes.com

AMX-10 RC showing its armament – Photo: As taken from Reddit 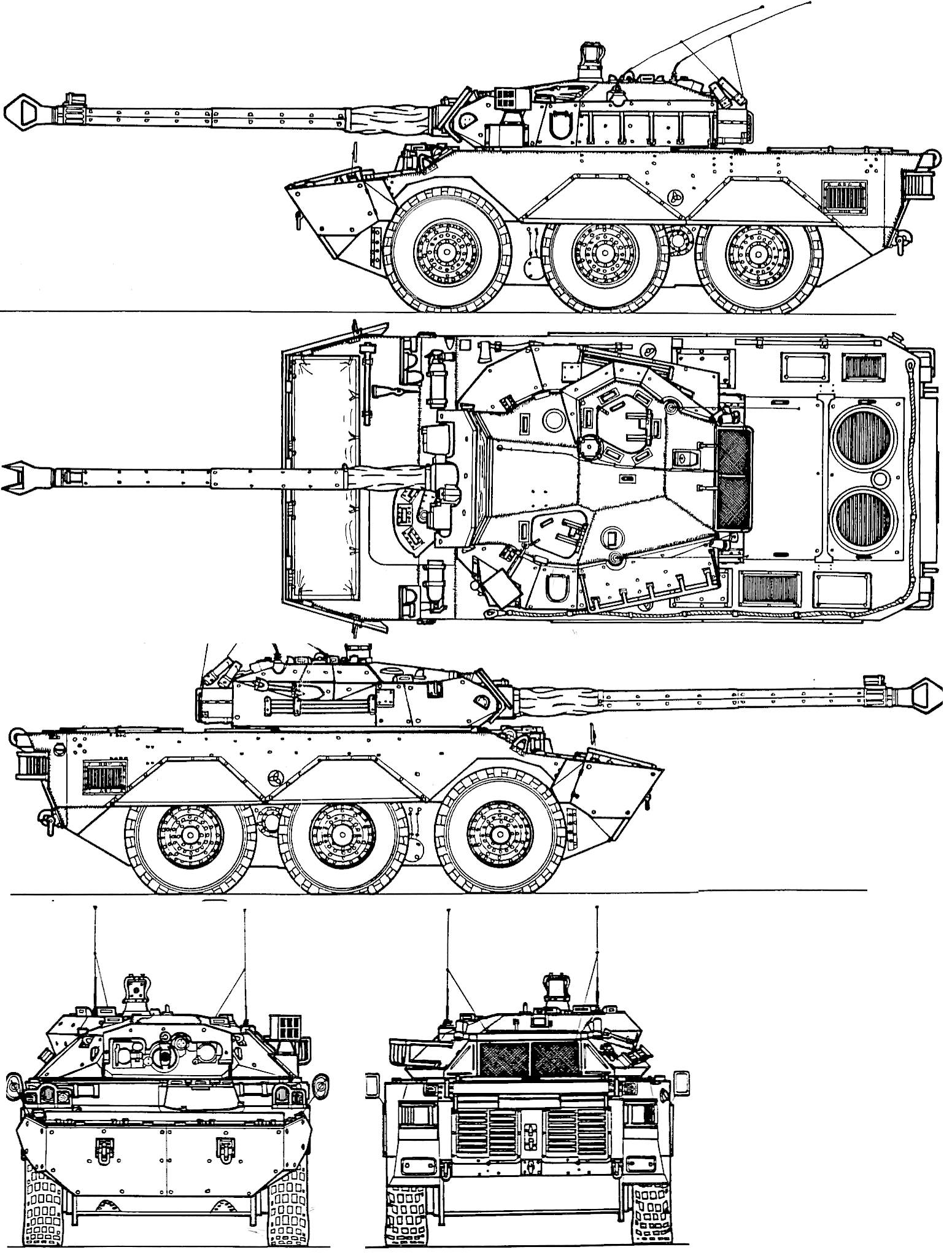 Video: Documentary on the 1st REGIMENT of SPAHIS

“In 1984, I joined the 1et Escadron 1er REC. Orange, France (French Foreign Legion), after I left the British Army having completed my length of service. I wanted to try something different. We used AMX-10 heavy armored cars. We were a reconnaissance unit.
You started off being posted to long-range desert modified jeeps and motorbikes. Then you were ‘promoted’ to AMX-10 loader and then gunner. I completed the AMX-10 driver’s course. Our Regiment and 1et Spahis were the recce units for the 6th Light Armored Brigade, which was in turn part of the FAR force action rapide.
By coincidence, the Spahis had visited us when I was serving in the British Army 2nd Royal Tank Regiment in Germany as part of a tri-nation force designed to keep open the Helmstedt corridor to Berlin in case of a crisis.
We operated 3x AMX-10RC per troop. Each Squadron had 4x troops. The Regiment was comprised of 4x Squadrons: number 1 to 4 and a HQ unit. The 4th Squadron was kitted out with VAB (Véhicule de l’avant blindé) armored personnel carriers and troops.
The Nexter Armoured campaign shooting exercise video you have on this page was exactly like the exercise I completed in 1985. Contrary to popular belief the French Foreign Legion does not just operate in the deserts of North Africa. The Legion practices battle craft in all environments including the snow.” – Neill Stuart Thomson.

You might want to add that the FSAPDS round only entered production in 1987. It may not have been widespread in issue, as the two regiments deployed to Desert Storm had 80% of their vehicles fitted out to carry FSAPDS as part of the upgrades mentioned in the article, which means they didn’t have FSAPDS before that.

That is correct, however the quote below the video was provided to us by one of our readers, who had served in the 1st Foreign Cavalry Regiment and wanted to share his insight as a crewman of the AMX-10 RC.
TE Moderator

ah ok thanks for the info, interesting document, greetings from a former amx driver 10-pc.