In 1962, the Cold War was at a peak, with the two great power blocks of the Soviet Union/Warsaw Pact and the United States/NATO facing off across Central Europe. By the 1960s, the Soviets had made significant strides forward in their armored vehicles and possessed both a numerical and, in many regards, a technical advantage over the NATO forces seeking to safeguard Europe.

The US was still maintaining large stocks of obsolete weapons including many from WW2 and had, by the late 1950s, realized the need for a new light tank. That program eventually led to the M551 Sheridan. When the first prototype of that vehicle was published in the summer of 1962, it appears to have spurred some further thought about a replacement or supplemental main battle tank for the US, one suitable for the perceived battlefields of Europe from 1965 to 1975. The US Armor Association issued a design competition one month after the appearance of the M551 for exactly this purpose, to design a new tank.

One of the men who answered the call and submitted a design was Gustave L. Eischen. Eischen is described by the Magazine of the US Armor Association only as being from Luxemburg, with no other details. In the photo above, his uniform and cap badge appear to indicate that he was a member of the Army of Luxembourg and his rank is given as a Sergeant. The Army of Luxembourg at the time was contributing a brigade-sized force to NATO in Europe, with little prospect of beginning its own tank production.

In a newspaper article in Luxembourg published on 7th December 1962, it states that Eischen, a soldier for 8 years and a mechanic in the Luxembourg Air Force, resigned to pursue other opportunities.

Eischen submitted a sketch and a model and claimed to have been working on his idea for several months prior to the competition being announced, meaning it would date to around January or February 1962 at the earliest. He had to submit it by the deadline of August 1962, so it is clearly not later than this latter date.

The design, at first glance, is quite unusual, with four sets of tracks and a steeply angled front and rear in what could be thought of as two half-tanks joined together. This is because the design was to use a pair of air-cooled engines and two drivers, one in each half. Mounted on top of the four two-roadwheel track units, the height of the tank could be varied hydropneumatically.

Having one driver at each end allowed for the vehicle to be driven at high speed safely in either direction without having to turn around. Along with the variable height of the suspension, this would allow a good deal of off-road mobility and a range “triple that of the M60” by virtue of the several ‘special’ fuel cells arranged around the vehicle.

The shape had one more critical advantage too. It allowed for extremely good visibility from the turret both fore and aft and for the vehicle to be equally fightable in each direction.

At just 6 meters long and 3 meters wide, the vehicle would have been almost exactly the same size as the WW2-era M24 Chaffee, albeit slightly heavier at between 24 and 32 US tons (21.8 tonnes to 29 tonnes) depending on the armor thickness selected.

The armament was to consist of either a conventional 75 mm or 90 mm gun, which would provide excellent general-purpose firepower against vehicles and infantry support. For contact with heavier tanks, against which the gun would not be adequate, it was supplemented by a pack of ‘self-homing’ [guided anti-tank] missiles. In order to keep the silhouette as small as possible, Eischen took the unusual step of simply placing the gun and missiles at opposite ends of the turret, facing in different directions. Thus, should a heavier target need to be attacked, the gun would have to be fully rotated to fire the missile. On the drawing submitted, a machine gun, fitted to what is assumed to be the commander’s cupola on the turret roof, is also shown.

Given the low weight – less than 30 tonnes – even at its heaviest, protection would be modest. The M24 Chaffee, a comparative-sized vehicle, had conventional welded steel armor up to 38 mm thick in places. Given the additional weight of the missiles, additional driver’s station and second engine, the Eischen tank would unlikely have been able to mount armor much thicker than the M24 Chaffee. The mention of ‘special’ fuel cells though could imply that Eischen was considering the careful placement of these fuel cells to increase protection for the vehicle, but whatever details he might have provided were not included in the article concluding the competition.

Eischen appears to have got nowhere with his design. It won second place in the Armor competition in 1962, behind the articulated tank concept of the Forsyth brothers. His military career did not pan out either, but a lingering trace of him exists in a patent for a self-supporting element used in the manufacture of prefabricated houses filed in 1971 in Germany. There his home town is given as that of Ettelbruck in Luxembourg.

Eischen’s design featured the significant novelty for 1962 as hydropneumatic suspension for 4 separate track units. The two-driver idea was not particularly new as many armored cars had featured a second (backward) driver before this for the same reason, the ability to withdraw at speed. The armament offered little in the way of novelty too, a conventional 75 mm gun was by 1962 a hopeless concept for anything other than the lightest of armored targets. Even consideration of a 90 mm gun would likely have been of little use against modern Soviet tanks which is why he had added missiles. It is the missiles which are the most interesting novelty of the design as they faced backward, an unusual yet simple solution to a complex problem of mounting a missile battery on a tank. 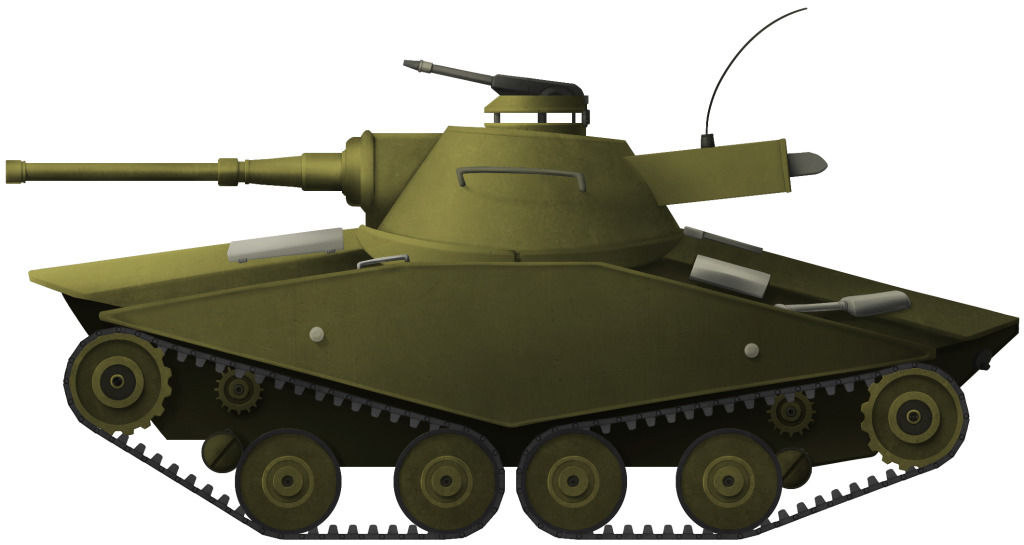