Every army, at some point, has to get around to tackling the design of a utility vehicle. These are small, mobile vehicles for a variety of roles, from hauling troops and supplies, to towing field guns, and even for combat. The small 4-wheeled utility vehicle known as the Jeep fulfilled many of these lighter roles during World War 2 as did the not-less-famous Universal or ‘Bren Gun’ Carrier. Both saw extensive use and modification to the extent that Universal Carrier and Bren Gun carrier are used as interchangeable terms and ‘Jeep’ became synonymous with an off-road vehicle.
What is less well known is that the Canadians did an extensive amount of work of their own for a tracked utility vehicle during the War. This was known as the ‘Tracked Jeep’; effectively a go-anywhere multipurpose tracked vehicle made with a lot of components from Jeeps. This small vehicle would be able to be borne by gliders for use by airborne troops and fulfill various support, logistic, and scout functions and had entered prototype testing by 1944. Orders placed in 1945 though were delayed in production and by the end of the War, the Tracked Jeep project was effectively dead, although some testing in the very marshy conditions of northern Canada’s Manitoba province provided useful information for later tracked developments. The primary author of this work was Major M.G. Bekker of the Canadian Army who worked for the Canadian Directorate of Vehicle Development.
Major Miecyslaw Gregory Bekker was a Polish emigree who had worked for the Polish Ministry of Defence from 1931 until 1939. In 1940 he was working for the French Ministry of Armaments, but with the Fall of France, that position did not last long, and by 1943, was living in Canada and working for the Canadian Military until 1946. His speciality was off-road traction and all-terrain vehicles and by 1950 was working on secondment for the Canadian military at the Stevens Institute of Technology in Michigan. He would later go on to become head of general mobility with General Motors Corporation, meaning that this highly experienced and well-travelled engineer could even have had a hand in the early stages of what became the US HMMWV program. 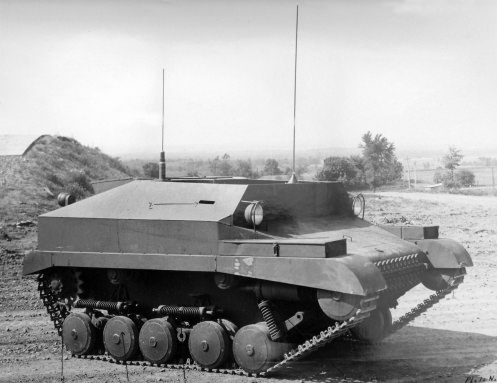 Canadian Tracked Jeep Pilot No.1, May 1944. Photo: MilArt blog
The lessons learned from the design were not forgotten though, and in 1950, with the Korean War (June 1950 – July 1953) starting, the US and Canadian authorities worked together on a new series of highly mobile tracked vehicles, and in doing so, looked back on developments including the experience from Canada with the Tracked Jeep. By 1950 though, the Tracked Jeep of WW2 had substantially evolved and was now more of a tank destroyer than a utility tractor.

Front and side views of the Tracked Jeep circa 1950. Source: Army Service Technical Information Agency 1951

The Tracked Jeep name had been kept, but the old suspension of 5 small 12 inch (300mm) diameter wheels had been abandoned in favour of a much simpler big-wheel design. The new design featured four much larger diameter wheels about 24 inches in diameter (600mm) with three of them in contact with the ground via the tracks, and the fourth at the front providing the drive. The rear-most wheel was on a trailing arm and was also provided with a large spring for suspension. The other wheels were sprung individually, horizontally.

Original suspension on the Canadian Tracked Jeep Pilot No.1, May 1944. Photo: MilArt blog 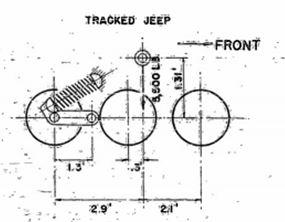 Improved suspension arrangement for Canadian Tracked Jeep showing the three ground contact wheels and rear trailing arm spring. Source: Army Service Technical Information Agency 1951
This tracked Jeep bore little or no resemblance to the older one. The hull one was different too. In place of the clean lines of the 1944 vehicle, this new 1950 vehicle was much more angular and now sported a turret. Not a full turret, but an unusual offset turret mounted on the rear right-hand side of the vehicle with limited 30 degrees traverse to the left and right. One similarity with the original tracked jeep though, was the retention of the original Willys Jeep engine, although as the original design had switched to the more efficient Carmazin radiator, it is likely this 1950 version retained that improvement too.

This diminutive vehicle was to have a crew of just two. A driver, located in the front left, and the overworked commander/gunner/loader in the rear centre sat facing outwards towards the breech of the rifle with the ammunition for the gun stowed behind him.

Illustration of the ‘Modified Tracked Jeep’ produced by Yuvnashva Sharma, funded by our Patreon Campaign.

The hull of the Tracked Jeep was just 112” inches long (2.84m) extending to 134” (3.4m) to the end of the gun barrel which overhung the front of the vehicle. The vehicle was light too, just 6,400 lbs gross weight (2.9 tonnes), but this was at the expense of protection. The armor was seriously thin with just 5/16” inch (8mm) at the front and ¼” (6.4mm) on the sides, making the vehicle barely bulletproof to normal small arms and not able to withstand machine-gun fire.
The small size of the vehicle (just 2.84m without the gun and 3.4m with it pointing forwards) was a very important factor. and could be reduced by stowing the gun at an angle across the hull to the front left corner). The vehicle was just 73” inches (1.85m) wide and 64” inches (1.63m) high and under 3 tons, meaning it was small enough and light enough to fit in every transport aircraft and glider in service at the time.

The advantage of this small vehicle was the armament. This design would provide a highly mobile platform, ideal for airborne troops with firepower to match. This firepower was in the form of a single 105 mm recoilless rifle. Assuming this to be the American M27 rifle, this would be able to fire the T-43 High Explosive Anti-Tank (HEAT-T) round at 1,250fps (381m/s), as well as the T268 High Explosive (HE)(standardised as the M323), T-269 White Phosphorus (WP)(standardised as the M325), T139 High Explosive Plastic (HEP-T)(standardised as the M345B1) and M326 High Explosive Plastic (HEP)(standardised as the M326) rounds. Only eight rounds could be carried in the vehicle though, limiting its usefulness for infantry support. If American practice was followed, this would be increased to 9 as the weapon was expected to be carried loaded into a combat zone.
There were three types of ranging available for the main gun from plain visual ranging, to stadiametric ranging, and finally, a rangefinder. With just a single shot, the estimated accuracy for a first shot hit with this weapon assessing those three types of range-finding was assessed in 1951 as 8%, 18%, and 49% respectively at 1000 yards (914 m). It should be noted too that the High Explosive Anti-Tank (HEAT or HEAT-T) round was capable of defeating 13” (330 mm) of armor plate which meant it was able to defeat any tank then in service.
The small turret in which the main gun was housed is shown in data tables as having 60 degrees of traverse with 30 degrees each side, however, a measurement of the blueprints shows, only 30 degrees to the right and just 21 degrees to the left for a total of 51 degrees. Elevation and depression are not stated but are measured from the blueprints as -10.5 degrees to +30 degrees. 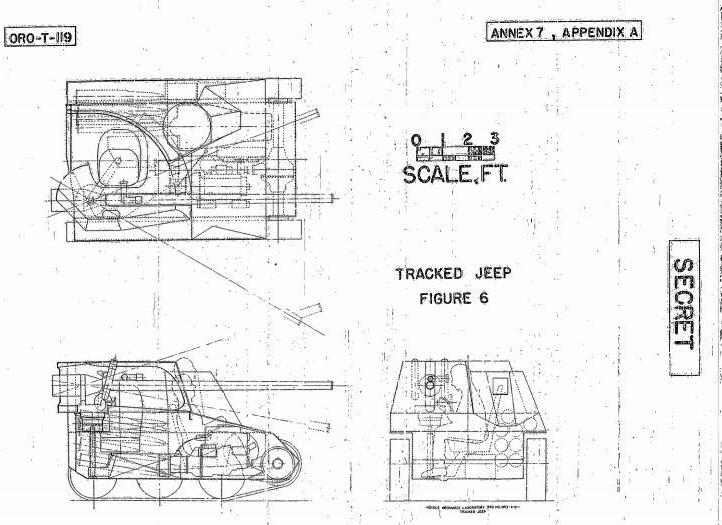 The tracked jeep was not a bad concept in 1944 and it was still a viable concept in 1950, but it had very little growth potential. The vehicle was not really much more than a universal carrier with a very lightly protected superstructure and a recoilless rifle. That rifle could and was already easily fittable on a normal wheeled jeep or onto almost any other tracked vehicle. The small size, two-man crew and lack of ammunition with just 8 rounds meant that the tracked jeep of 1950 was not heavily armored enough to withstand enemy counterfire and not well-armed enough to provide sustained fire support in battle. As such the project was discontinued, the merits simply did not outweigh the problems and other solutions were available.

One reply on “Modified Tracked Jeep”