The most prolific Japanese tankette

By 1930, there was a strong belief that the tankette was the perfect means to motorize entire army groups with half the cost of normal tanks. This cheap asset was appreciated by many countries, which quickly built or bought swarms of these machines. The best-seller, at the time, was the British Vickers designed Carden-Loyd Mk.VI. A Japanese army commission was mandated to purchase several British and French models, in order to compare their respective performances.
They had already tested and put in service Renault FT (as the Ko Gata), and heavily tested the Carden-Loyd Mk.VI. However, the IJN commission decided to produce a domestic design, better able to fit the army’s requirements.

At first, the process led to the Type 92 Jyu Sokosha, a large tankette almost exclusively used by the cavalry. But, as the army decided to have its own tankette, a new lighter model, usable within infantry companies was requested, intended to provide support when needed, either with firepower or supplies. The first design, dating back from 1932, was revised by the Tokyo Gas and Electric Industry, and new plans in 1933 led to a prototype the following year. This led to the Type 94 TK, for Tokushu Keninsha, “special tractor”. This was to be a versatile design, capable of scouting operations, infantry support and transport. It was also designed to replace the already existing fleet of armored cars in Manchukuo, as an off-road vehicle.

Design of the TK

The Type 94 was a minimalist design. A light tracked hull with a small turret fitted at the rear, armed with a single machine-gun, with the engine at the front and driver to the right. The concept was, apparently, inspired by the Carden-Loyd Mk.VI. The hull was riveted, and the Mitsubushi air-cooled engine developed 35 bhp at 2500 rpm, for a total of 9.5 bhp/ton. The crew was protected from heat by asbestos insulation. The speed was the same as that of the original British design. The commander, who also acted as gunner, sat in the turret, which was manually traversed, by pushing a shoulder against the machine-gun. There was also a storage compartment at the rear, accessible through a large door. The original armament, a Type 91 6.5 mm (0.25 in) gas-operated machine gun (1980 rounds), was later replaced by a more powerful Type 92 7.7 mm (0.31 in) model during production and in service.
The gun was protected by an armored mantlet. The suspension system comprised two bogies, each supporting two rubber road wheels, combined with a Japanese bell crank reinforced by horizontal compression springs, invented by Major Tomio Hara. The drive sprocket was at the front and the idler wheel was at the rear, and the narrow track was supported on two rubber-filled return rollers. Like many narrow-tracked fast tanks, these were prone to throwing off their tracks during high-speed turns. To fix this issue, a later variant had a larger idler wheel, and the last received a complete redesign of the suspension. But the problem remained until the end of production in 1937.

The Type 94s were relatively homogeneous, as they were built by the same contractor, Hiro Motor Company. The most notable difference is the suspension system, with the first two models differing only by having a small or big idler wheel, while the last had a revised suspension and longer chassis, now 3.35 m (11 ft) long. Other variations include the machine-gun model, with or without protective mantlet, and minor finishing details and equipment, like searchlights projectors and tools fixations.
The Type 94 differed from other tankettes by having a towing device installed and a tracked trailer that carried supplies. A single prototype was tested with a diesel engine, placed on the right, with the driver displaced to left side of the hull. Trials and experiments led to the development of the Type 97 Te-Ke, which succeeded it. The TK chassis was used for several variants, including a Disinfecting Vehicle, Gas Scattering Vehicle, Pole Planter, and Cable Layer.

The Type 94 tankette in action

The first tankettes were accepted in service in 1934. They were deployed in small independent tankette companies, in order to act as “flying squads”. They quickly provided infantry support where needed, and were used for reconnaissance. In China, a 118-man company had four platoons of four tankettes. Later on, one company was attached to each infantry division, comprising six Type 94s. Production was an average 250 per year, from 1935 to 1937, at 50,000 yen apiece, which is less than half the cost of a single Type 89 medium tank.
In operations, the tankette proved to be useful, and took its place in many tactical concepts in China. For these reasons, they were still used as such by 1941, although now obsolete. First engagements came in 1939 on the Soviet-Chinese-Mongolian frontier, notably at Nomonanh. Most of these tankettes remained in China (Hebei, Chahar, Shanghai, Taierchwang, Hsuchou) and Manchukuo (Nomonhan and Hsinking). However, many others were found wherever IJN infantry divisions were sent, which included most of the Pacific and Oceania, including Burma, the Dutch East Indies, Philippines and most southern Pacific major islands, like Guadalcanal. A few were also assigned to IJN marines, where US marines encountered them. They fell easy prey to .50 caliber (12.7 mm) machine-gun fire, grenades, bazookas, and light tanks like the M3. Many were captured at Kwajalein, belonging to the 2nd Battalion of Army, 1st Sea-mobile Brigade. Others were seized by Anzac forces at Java, formerly of the 2nd, 3rd and 48th Recon Regiment and 56th Infantry Group Tankette Unit, and on Timor, of the 38th Division Tankette Company. Many Type 94 tankettes were still active in August 1945, when the USSR invaded Manchukuo.

The TK on Wikipedia

Last evolution of the Type 94 TK tankette. This was almost a completely new model, with the late type long hull and large idler wheel, and a completely reworked suspension system. It was the blueprint for the next Type 97 tankette. 2nd Battalion of the IJA, Kwajalein, 1943.

A captured Type 94 TK carried by a M4 Sherman, at Kwajalein. You can easily get a sense of its size from this image – Credits: Wikipedia. 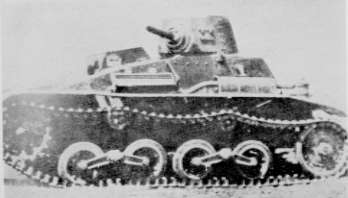 A late production Type 94 TK, with a longer hull and larger idler wheel, in order to cope with the tracks being throwing off at high speed turns – Credits: IJN archives

Out of all the tanks i’ve come across, this is one of the only ones i’d feel guilty about killing. It’s adorably cute and also so bad at it’s job you just have to feel sympathetic for it. Well, at least the normal one. If i’m not mistaken they made a gas dispensing version of this thing which effectively makes it as inhumane as a Churchill Crocodile. The gas one I would take out without hesitation