History of the T15 light tank

During the motorization program of the Belgian Army, it was decided to buy tracked armored vehicles in order to equip the newly created “Chasseurs Ardennais”. The Vickers-Carden-Loyd Model 1934 (or “4 ton”) tankette was chosen. 42 were ordered (in two batches). The first 18 units were ordered on the 10th of March 1934, and delivered in two lots of 9, in February 1935, on the 15th and 22nd respectively. 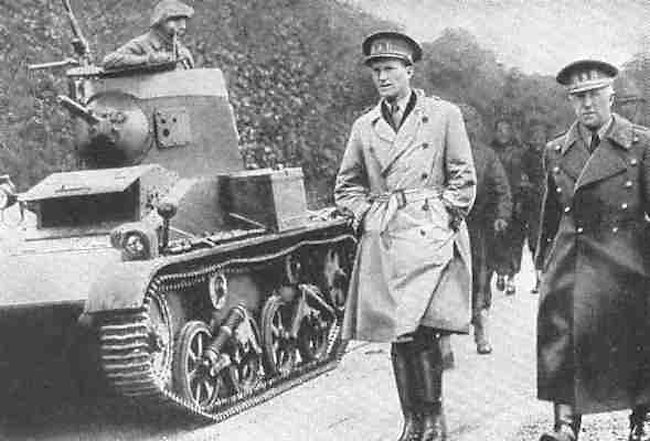 King Leopold reviewing his light armored forces with General Denis on the 22nd of May 1940
The second batch (24 units) was ordered on 16th April 1935 and they were delivered between the November 15 and December 28, 1935. During trials, it was shown these vehicles had the required agility and speed to fulfill the specifications. Belgium, at that time, followed a strict neutrality policy and avoided buying heavier tanks, which could be seen as a provocation by the Third Reich.

Generally similar to the British Light Mk.III/IV. The vehicles were delivered according to the issued specifications, including a special conical turret and no weapons. The FRC (Fonderie Royale de Canons) was given the task of fitting a 13.2 mm (0.52 in) Hotchkiss heavy machine gun, which were initially bought for the Aeronautique Militaire, and were light enough for the tankette. 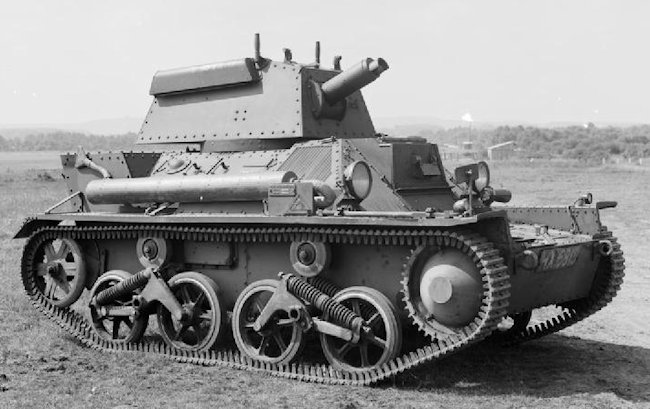 Vickers Light Tank Mark III, 5-ton class. The T15 was based on this British tank.
Compared to the British equivalent, it was a much more potent armament, capable of going through 13 mm of armor at 500 m (0.51 in at 1640 ft), enough to destroy any armored cars and many light tanks of the time, including the German Panzer I. There was no coaxial armament. However, some T15s were also fitted with a support on the turret for a FN-Browning FM-30 automatic rifle, for antiaircraft defense.
The hull was partly welded and made of riveted plates, 7 to 9 mm thick (0.27-0.35 in), which was fairly light and did not provide sufficient protection against heavy machine guns and most light anti tank guns and rifles of the time. However, combined with the British gasoline 90 hp Meadows EAST water-cooled engine, the speed was remarkable (64 km/h or 40 mph), even by tankette standards.
This was perfectly suited for cavalry tactics. The suspension comprised four twin rubberized road wheels, mounted on two bogies. The drive sprocket was at the front, idler at the rear. Steering was performed through brake levers. As usual for British tankettes fitted with the same scissors type suspensions, the forward pitch when braking was somewhat excessive and prevented any immediate aiming. Traverse was electric. 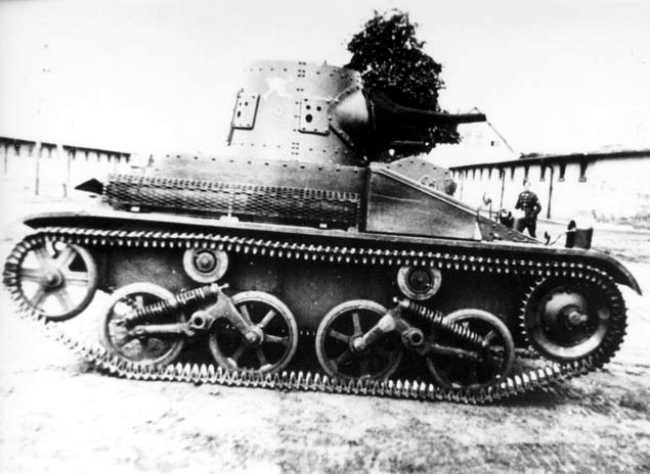 The T15 in action

Lightning fast, but poorly protected and lacking firepower, the T15 was only marginally better than an armored car, with good off-road capabilities, but lacking a radio. Their speed made them more difficult to pick up and fire at, but tactically they were spread out in “penny packets” in various cavalry units, according to French tactics at the time.
They were completely outclassed and outnumbered by the Germans, applying the “Schwerpunkt” tactic. These small units were destroyed and swallowed by the German onslaught in a few days. By the end of June most had been destroyed and those remaining were later captured, serving as the Panzerspahwagen VCL 701(b)(Reconnaissance light tank). They probably never left Belgium. 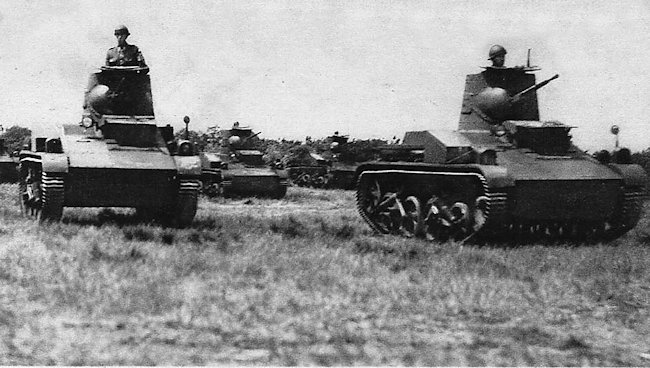 T15, presumably of the 2nd Lanciers, Gembloux area, May 1940, courtesy of Georges Coninckx. T15 of the Chasseurs Ardennais, recognizable by their Ardennes wild boar emblem. The gun had no protective mantlet. 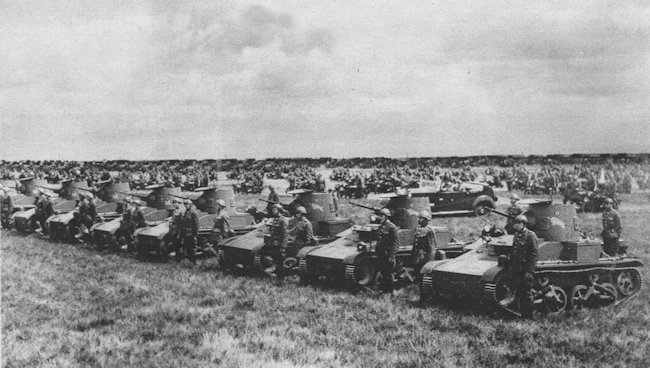 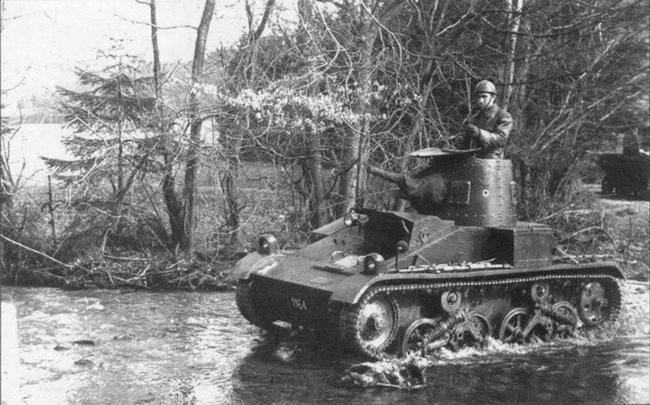 A T15 tank on manoeuvres in 1940. Notice the small Belgium roundel on the side of the turret. 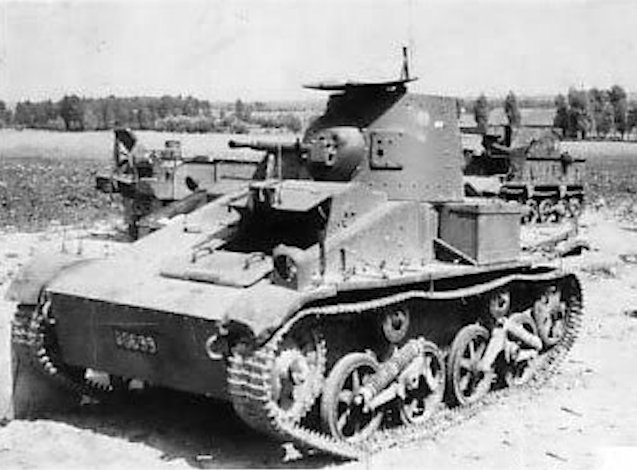 An external stowage box could be fitted to the left side of the tank chasis. 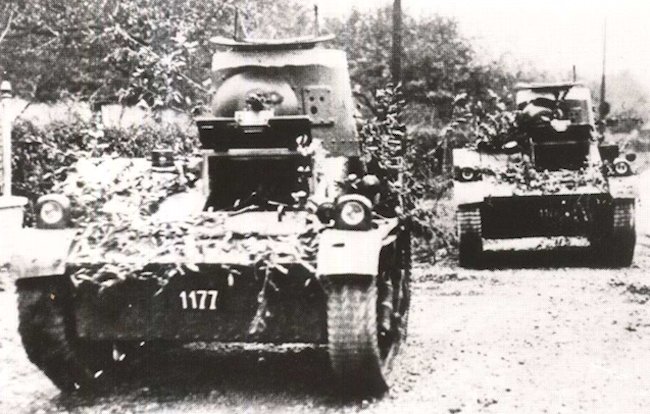 T15 from the elite Chasseurs Ardennais 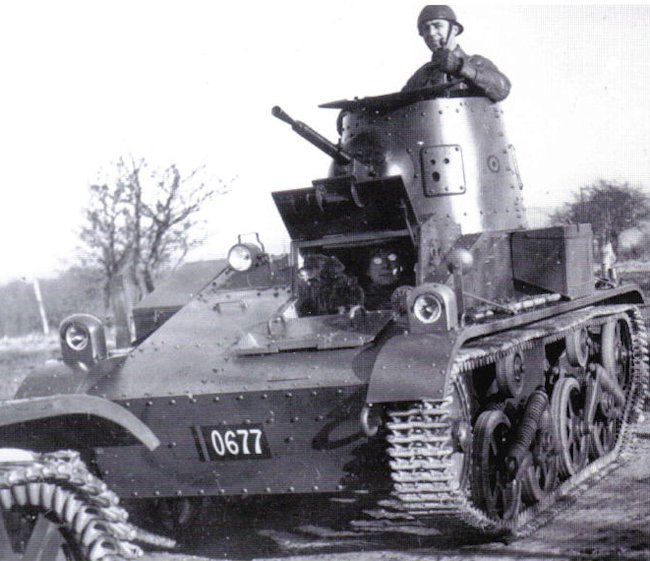 The driver sat immediately below the commander. Directions to turn left and right were often communicated by the commanders using his feet on the back of the driver. 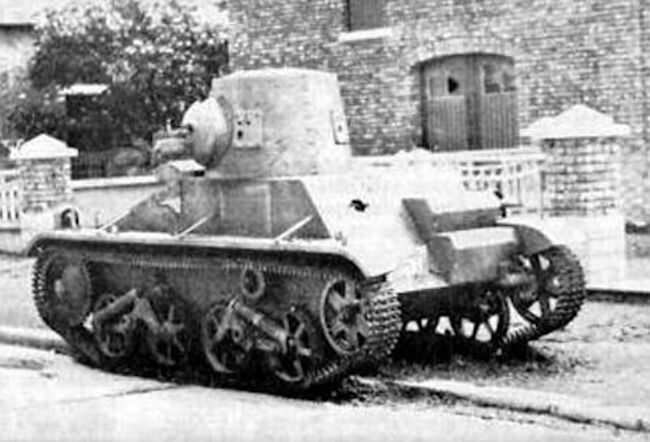