One of the best Italian tank hunters of WW2

Way before the Semovente da 90/53 was even thought of, the Regio Esercito, participating in the offensive on the Eastern Front, learnt the hard way that the T-34 and KV-1 were though nuts to crack, as did the Germans. 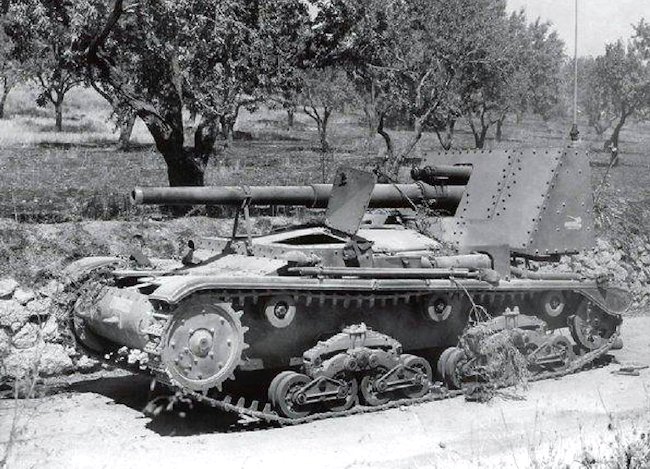 Semovente da 90/53 in Southern Italy, early 1944.
Following their ally, the Italians required a self-propelled gun able to deal with the threat. This vehicle was inspired by the contemporary German Hornisse, the first SPG mounting the fearsome 88 mm (3.46 in). Italy could rely, at that time, on a potent anti aircraft naval & land gun, the 90 mm (3.54 in) modello 1939. However, due to technical constraints, Italian engineers took a different path to matching it with a hull. But, in the end, the Italian forces received a tank hunter that could effectively nail down any Allied tank in 1942.

Due to the choice of the best platform available at that time, the M14/41 tank, options were limited on how to mount the gun. Its weight and size meant a revolving turret was out of the question, and mounting the gun in the middle would have been impossible due to stability problems. For balance and weight distribution reasons, the gun was mounted at the rear of the chassis, without its carriage, but retaining a fixed 8 mm (0.31 in) thick mask. Also, the chassis was modified, lowered at the rear to allow servants to climb and serve the gun more easily, and the bogies were moved to the rear, in accordance to the new weight repartition. The engine was moved to the center, with the driver in front, separated from the rest of the crew.
The gun itself, the Cannone da 90/53 modello 1939, with a 53 caliber long barrel, was the best the Italian industry could offer then. It was built by Ansaldo, 539 units being delivered from June 1939 to the Italian capitulation in November 1943. It had rapid-fire capabilities (19 RPM), a muzzle velocity of 830 m/s (2,723 ft/s), a maximum ceiling of 12,000 m (39,370 ft) and indirect range of 17 km (57,000 ft). In direct fire, it was effective against targets at up to 2500 meters, but the best results were attained with the Effetto Pronto, or HEAT round, which could penetrate 70 mm (2.75 in) of armor at a range of 2,200 meters. This gun was already used in a dual rôle in North Africa, mounted on Lancia trucks. But, in Russia, a tracked vehicle was needed, so 48 were mounted on what became the Semovente 90/53 (also called 41M). This model was not without drawbacks however. It was slow and heavy, the small shield did not protect the two servants and commander operating from behind the vehicle, and the lack of space available meant that only six rounds were carried. The rest was carried by a converted turretless FIAT L6/40, following each SPG. 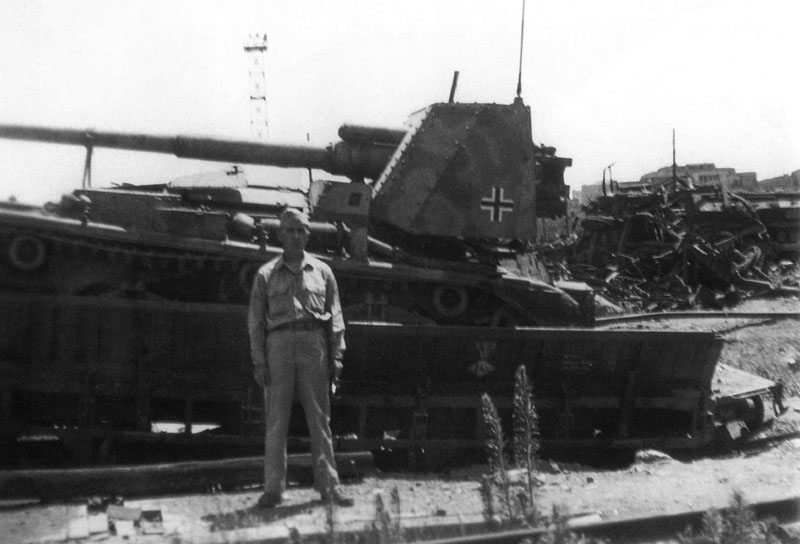 A 90/53 in the service of the 26 Panzer Division, Rome, March 1944. Photo: – Beutepanzer.com
Ansaldo’s engineers led the project at a breathtaking pace, and the first prototype was completed in March 1942. After trials an order for 30 vehicle plus 15 command versions followed. The Semovente 90/53 was ready for service before the end of April 1942, just a few weeks after the idea first emerged.
Eventually, with the situation fast degrading in Russia, these tank hunters were instead shipped to North Africa, were they found themselves at an advantage, due to the flat landscape and excellent visibility. They soldiered well until the end of the Tunisian campaign, most managing to escape in Sicily. 24 vehicles of the 10° Ragruppamento Semoventi were heavily used during the Allied invasion in 1943. Later on, the surviving ones were stationed in Italy.
By the time of the armistice, German forces took over the few SPGs still working, and used them as mobile gun positions in high ground, using at best the mountainous terrain. Some apparently ended as fixed artillery pieces in 1945, without carriage. 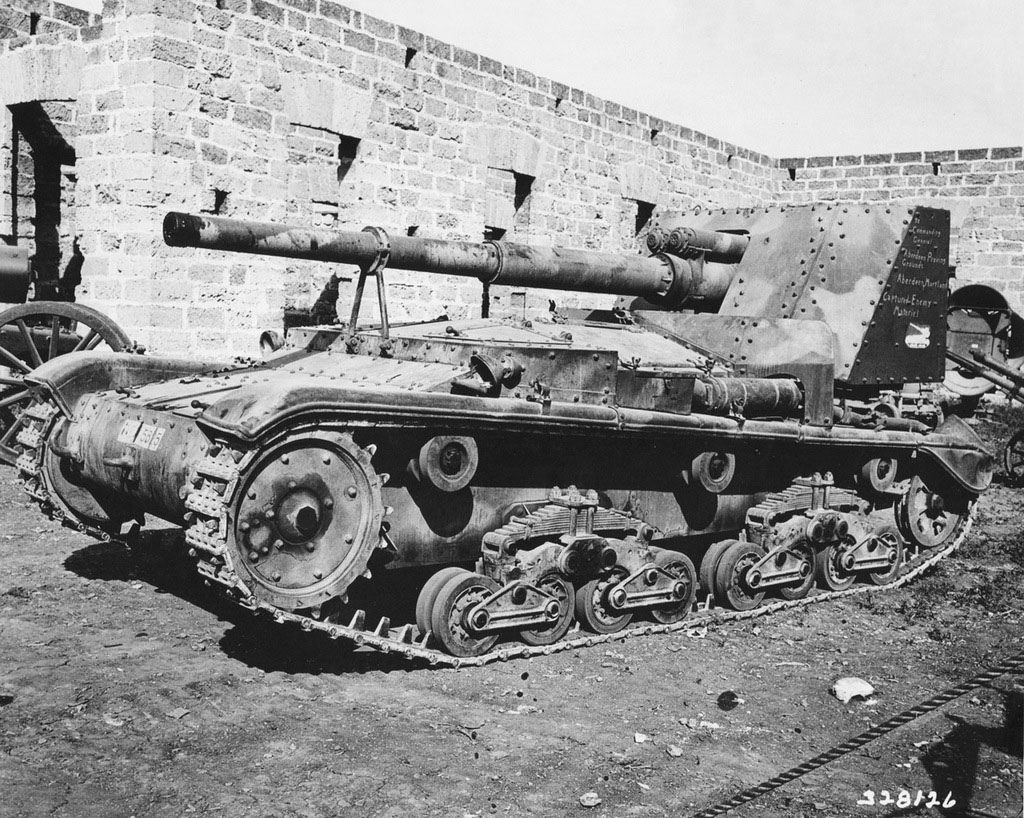 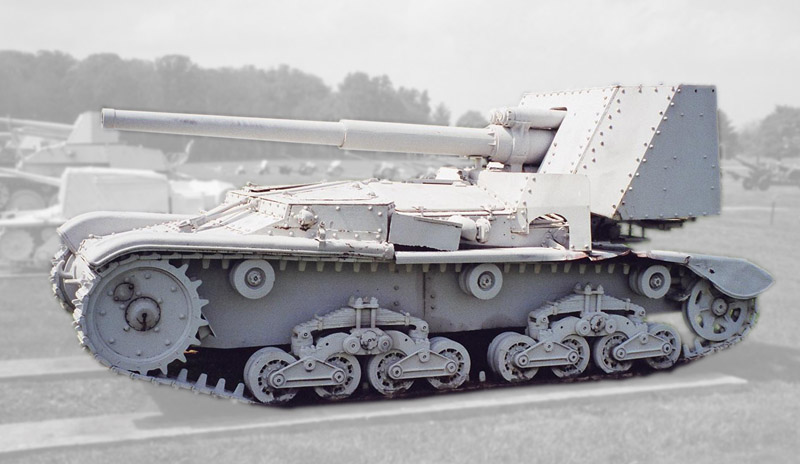 This former 163rd Support Artillery Group vehicle was captured in Sicily by US troops. It ended at the Aberdeen Proving Grounds in Maryland, and was restored in 2012 at Fort Sill, Oklahoma by the Fort Sill Directorate of Logistics (DoL) paint shop. 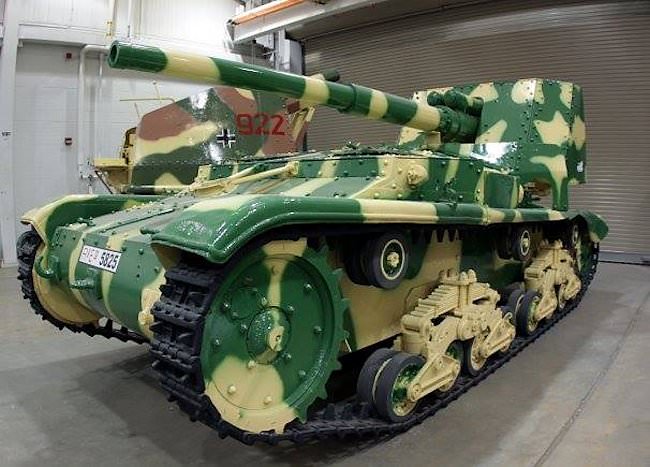 The surviving Italian Semovente da 90/53 that was at Aberdeen Proving Grounds has now been given a new coat of paint and has been moved to Fort Sill. (Photo Credit: Ben Sherman)

”but the best results were attained with the Effetto Pronto, or HEAT round, which could penetrate 70 mm (2.75 in) of armor at a range of 2,200 meters.”
In truth no, there were never an EP/EPS/HEAT/HESH ammo for the 90 mm, even if considered. This is came by the research made by Nicola Pignato, the main armour expert in Italy.

Very interesting. Looks like a tank in the game ‘world of tanks’ that is part of the German line called the ‘Waffentrager auf panzer IV’ Do you have information of more Italian SPG’s or tank destroyers, please?

There were no EP’s which are blunt rounds to work so do not have the velocity for precise hits at distance, and the vehicle never went to Africa.
If fought with success Shermans in hilly Sicilian terrain, but being defeated by artillery fire.

The semovente fiat ansaldo m42 da 90/53 was armed with the cannone antiaereo da 90/53 modello 1939 (anti-aircraft cannon 90/53 model 1939).
The cannon had similar penetration performances of the cannone antiaereo da 88/55 (the German flak 88).
The EP and EPS (EFFETTO PRONTO, EFFETTO PRONTO SPECIALE. Ready effect, special ready effect. HEAT ammo) in 1943 were only prototype (a few ammo were given to artillery company for test) but have penetration valour similar at the LH German HEAT 88mm ammo.
The AP ammo have penetration valour to:
100m = 126mm
500m = 109mm
1000m = 90mm
2000m = 62mm
values recorded on a inclined rolled homogeneous armour at 30 degrees
The cannon olso had 5 type of HE or HE-FRAG ammo used commonly against aircraft or soldier.