The Marmon-Herrington MTLS-1GI4 is probably the most unusual tank produced by the Marmon-Herrington company before and during the Second World War. During the spring of 1941, 200 pieces were ordered by the Netherlands Purchase Commision for the Royal Netherlands East Indies Army (Dutch: Koninklijk Nederlandsch-Indisch Leger, abbreviated to ‘KNIL’), in a desperate move to equip itself with tanks. Armed with twin 37mm guns and up to 7 machine guns, the tank was a one of a kind.

Starting in 1936, the KNIL tried to re-equip itself, as it had been neglected for nearly twenty years. Four Vickers tanks, including two amphibious models, were obtained and, satisfied with the results of testing, the KNIL placed an order for 73 light tanks and 45 gun-armed command tanks, but due to the outbreak of the war, only 20 light tanks were delivered before the UK blocked all exports. So, the KNIL turned to the United States and bought a total of 628 Marmon-Herrington tanks instead. Two hundred of these were the MTLS-1GI4 model. It was agreed that the complete order of CTMS and CTLS and 100 MTLS tanks should be delivered before 1st July 1942. Due to the company having no experience handling an order this big, they suffered from huge production delays and only a small number of the CTLS made it to the East Indies before Java was occupied by the Japanese and all transports were canceled. The production order was taken over by the US Army and production of the 200 MTLS was halted by the US after just 125 pieces had been built.

The MTLS tank was an enlarged version of the CTMS tank which, in turn, was based on the Combat Tank Light series (CTL), designed by Marmon-Herrington in the mid-1930’s. Although the vertical volute spring suspension was reinforced compared to the CTL tanks, it was not really fit to support a weight of 22 US tons (20,000kg). The armor thickness varied between 1½ inches (38mm) at the front and ½ inch (13mm) on top. The tracks were 18 inches (46cm) wide. The Hercules gasoline engine produced 240 horsepower and resulted in a maximum speed of 25 miles per hour (40 kph).

The twin mounted 37mm L.44 guns were designed by the American Armament Corporation. Both could be loaded with a clip of five shells. When firing fully automatically, they theoratically could fire one-eighth of a second after one another, although tests at Aberdeed concluded they often could not even fire a single shell. A .30 cal machine-gun was mounted coaxially. Another one was ball-mounted in the right front sidewall of the turret and faced forwards. Two machine-guns could be mounted on the back of the turret and serve as anti-air guns. Two more machine-guns were mounted fixed in the hull, although most of the times only one was installed, while a seventh was located in a ball-mount.

The MTLS had some severe design flaws, as the vehicle was essentially an enlarged version of a vehicle weighing less than 10 US tons, now coming in at 22 US tons. The increased weight had a severe impact on the suspension and overall structure of the vehicle, making it very unreliable. Furthermore, the increase of the number of crewmen from two to four was not well taken into account and, as a result, the complete crew had to enter through the hatch on top of the turret, which would be rather inconvenient in a combat situation.

Fit for US service?

One MTLS was tested at the Aberdeen Proving Grounds by the US starting in April 1943 and continuing until November. The test results were clearly stated in the report: “The vehicle is thoroughly unreliable, mechanically and structurally unsound, underpowered and equipped with unsatisfactory armament. The 4-Man Dutch Tank Model MTLS-1GI4 is not a satisfactory combat vehicle for any branch of the Armed Forces”. However, in 1946, the vehicle was still present at Aberdeen, together with the CTMS tank, which was also tested, but what happened to them afterward is unknown.

Although the Netherlands was occupied by the Germans and the Dutch Indies were occupied by the Japanese, the Kingdom of the Netherlands still possessed colonies in Latin America. These were very important for the US as they provided oil and most of the bauxite that was needed for the production of aluminum. For defense, first American troops, but later troops from Puerto Rico were stationed at these Dutch colonies. Furthermore, a Tank Battalion (Bataljon Vechtwagens) was founded in May 1942, based in Suriname.

Together with 28 CTLS and 26 CTMS tanks, 19 MTLS tanks were sent to Suriname. They were operated by the battalion which consisted out of a marines detachment, about eighty men and a detachment from the Prinses Irene Brigade, with 225 men and soldiers that were already stationed in Suriname. However, the Dutch Army could not directly provide enough resources to maintain a full battalion, which lacked personnel and accommodation, but a ‘half-battalion’ was formed during the summer of 1943. Unfortunately, the marines detachment moved to the USA in September 1943 for training and the group from the Prinses Irene Brigade also returned to England in 1943, in preparation for the planned invasion in France. To make matters worse, volunteers left to Australia to join the Dutch troops stationed there. This huge lack of personnel led to that the battalion only operated a small portion of their tanks. Plans to ship all MTLS  tanks to Indonesia after the Second World War were quickly abandoned, because it was considered to be too expensive. 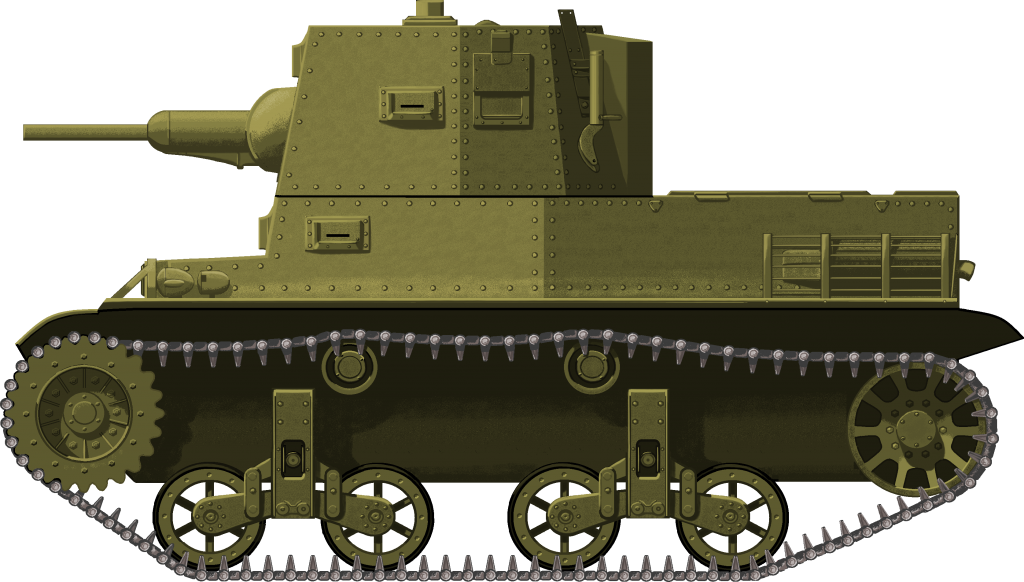 Illustration of the Marmon-Herrington MTLS-1GI4 light tank. The vehicle is missing its hull machine-gun. Illustrated by Jaroslaw “Jarja” Janas and sponsored by Deadly Dilemma through our Patreon page

I’ve been waiting for this article!
Thanks for writing this.
Interesting tank, and I really like the two barrels.

Do I understand correctly that the dual 37mm would fire all 10 shells in about 1 second on full auto?
Is this weapon adapted from an AA gun?
What other fire modes did it feature?

I have sent your question to the author.
The guns could also fire single shot. He is looking for more info to give a more complete answer.

Hello Falk,
The gun was developed by the American Armament Coorporation and is known to have developed some automatic guns, also designed to be fitted in aircraft. Although it is a myth that they designed the 37 mm P-39 aircraft cannon, they definetly developed some automatic cannons.
Unfortunately, there is nearly no information on the subject of these guns, but I can recommend this forum threat: https://www.tapatalk.com/groups/theovervalwagenforum/mysterious-automatic-cannon-t149.html which is about AAC 37 mm guns, also in use with the Dutch forces.
Kind regards,
Leander

Thank you Sir, you are a legend!

should have total kills for each war.

Anyone know where I could find some sort of blueprint for this tank? I’d love to try and scratch build this.

Check the video link here below, for the actual testing reports for the US Army.
https://www.youtube.com/watch?v=faaea_1jWaE
The testing reports deemed the tank unacceptable for a buch of reasons.