Since 1940, the main antitank, all-terrain fast vehicle in service with the US Army was the M6 GMC. It was a basic 4 wheeled truck equipped with a 37 mm (1.46 in) gun installed on the rear bed, only protected by a frontal mask. The crew was exposed, and the M6 was lightly protected.

Despite this, it remained in service until 1945. However, its deficiencies led the US Army ordnance department to launch the development of a new vehicle in July 1941. The requirements asked for a 6×6 with better off-road capabilities, entirely armored, with the 37 mm (1.46 in) gun protected by a turret, and a better anti-personal, close-combat armament, which included a combination of a heavy .50 (12.7 mm) and a .30 (7.62 mm) caliber machine-guns. 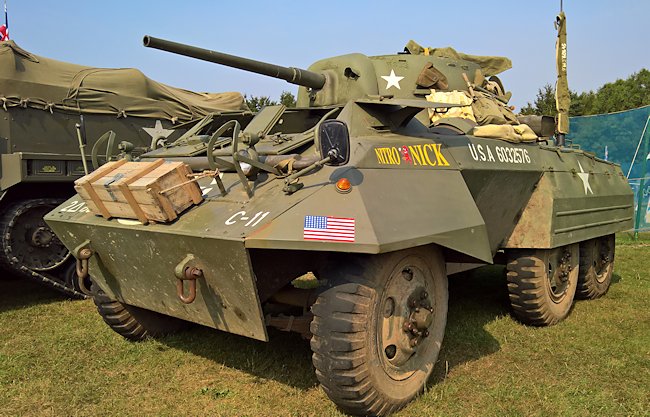 Restored M8 Greyhound Armored Car at the Military Odyssey event in Kent, Southern England
The glacis sloped armor was designed to withstand 13 mm (0.51 in) heavy machine gun fire. Once the specifications were made public, Studebaker, Ford and Chrysler submitted their designs, named respectively T21, 22 and 23, all of them very similar in appearance.

After a thorough examination and many tests at Aberdeen, which lasted until March 1942, the Ford T22E2 was chosen and hastily modified, mainly because of fast-delivery schedules. However, at this stage, the M6’s 37 mm (1.46 in) was found incapable against the latest German tanks, therefore denying its use as a tank-hunter. In order not to halt the entire development of this model, the Ordnance department decided to shift production under the new denomination of “M8 Light Armored Car”, an armored reconnaissance vehicle which could fill the gap between the M3/M5 light tanks and the M3 Scout Car.
As no armored car had been produced for the US Army in large numbers before, delays while setting up the production dragged on until March 1943, one year after it was approved. However, together with sub-contractors, Ford delivered a total of 8523 (8634 from other sources) until the line was stopped in June 1945, making it the most produced armored car in history. For this reason, and its affordable cost, the M8 began a long and successful post-war career. 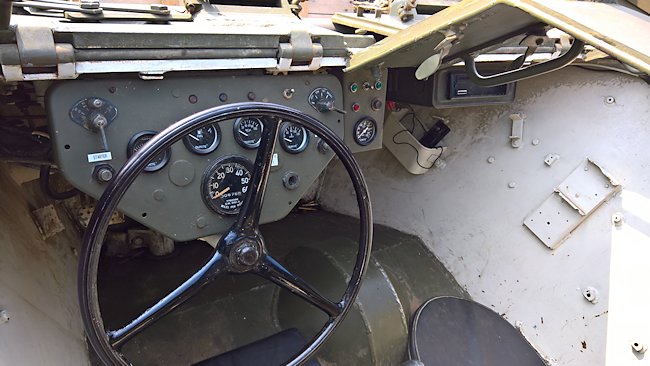 The vehicle eventually put into production was the T22E2, a 6×6 standardized version approved on May 19, 1942. It’s forerunner, the T22E1, was a 4×4, also tested, but rejected. It had an all welded hull, although some external panels were riveted. Only the front axle was used for steering, while the two at the rear were fixed. These wheels had an armored center and a bead lock to prevent them from collapsing in combat.

The driver, who sat on the left, while the radio operator sat on the right, used a standard steering wheel. They had a protruding compartment with two-piece folding armored panels and narrow sights. The turret housed both the commander and gunner, and was open-top, although shutters and hatch covers could be closed and small scopes used for peripheral vision. The M6 main gun was aimed with a M70D telescopic sight.
It received 80 rounds when operating a single radio, but often a second one was fitted, this leaving room for only 16 rounds stored in the turret. For this reason, additional racks were mounted externally when possible.

The coaxial cal.30 machine gun was fed by 1500 rounds, and this was completed by a provision of 16 hand grenades, four M1/M2 smoke pots, 6 land-mines (AT or HE) mounted externally and M1 Carbines for the crew.
The armor was sloped, including a frontal glacis which was 19 mm (0.75 in) strong. The slope configuration gave extra effective thickness. The weakest part was clearly the floor, only 3 mm (0.12 in) thick. It was unable to resist a mine blast, which represented a serious threat for their M8 crews. The engine, a gasoline Hercules Model JXD 6 in-line of 320 cu.in gave an average 48 km/h (30 mph off-road), 90 km/h (56 mph) on roads. Consumption was 7.5 mpg, with 59 gallons stored, which allowed a comfortable 640 km (400 mi) range. The engine was covered by specially designed fans which blew towards the rear. Fixations and mechanical parts were also carefully tailored for silent operations, with such results that recon units of the Third Army were nicknamed by the Germans “Patton’s ghosts”.

A powerful radio set was mounted due to the nature of the vehicle, at first a SCR506, then 508, 510, 608, and 610 models, all long range. They were operated from the inside and served for direct contact with the HQ, or with other units as a command car, or for relaying information from more distant theaters. The wheels were protected by removable sand shields, the rear being winged, in order to allow them to be folded and add tire chains in snowy conditions.
Because of the cramped interior, many hooks and other fixations were included to the turret and hull, and most personal equipment was mounted externally on the front and rear fenders and mudguards. This included haversacks, tooling, cables, but sandbags were also added later for extra protection. The rear hull panel comprised a pintle for towing a trailer or a light gun, the mud guards housed a removable set of blackout lights, and the central part, sloped inwards, received racks for three mines or two ammunition boxes , or jerrycans, and was protected by a removable protective panel, rarely mounted in practice. 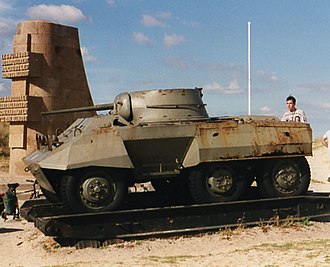 Because production was assured by a single contractor, Ford, the entire series was homogeneous. Some differences arose by having protection panels and sand shields mounted or not, and some variations in the shape of the superior part of gun mount, over the turret. Early models had their 50 caliber (12.7 mm) machine gun placed just behind the main turret on a pintle mount and was operated from outside the vehicle, like on some contemporary tanks. Later, a new ring mount was fixed over the turret, raising the position of the cal.50 (12.7 mm), and also allowing the machine-gun to be operated from inside the turret.

This ring mount provided a far better traverse and angle for AA fire, but also raised concerns about stability. Several subvariants of these mounts existed, and nearly all were fixed during operations, as they were non-factory standard. Another detail was the steel gas tank replaced by a rubber one, and correction of several mechanical issues, which greatly improved its reliability.
Only two prototypes were derived from the M8, but never entered production. The M8E1 tested a new suspension in 1943, while the T69 MGMC tested a conversion into an anti-aircraft light armored vehicle, bearing a quad Maxston mount (4 x 50. cal/12.7 mm machine guns) in late 1943.

This was the main derivative of the Greyhound, also developed and built by Ford, as a command and control car, devoid of any turret. Its only armament comprised a lowered ring mounting a 0.50 cal (12.7 mm) heavy machine-gun, and stored weapons included a bazooka.
It was open-topped, roomier, and equipped with one or two long range radios. It was also lighter and faster and also served as an APC during the war. In all, Ford delivered 3680 “M20 Scout Car”, as it was also known, from early 1943 until late 1944, also exported under Lend-Lease.

The M8 Greyhound in operation

The M8 Greyhound was thought to be far more capable, as a fighting machine, than the M3 Scout Car and half-tracks in service. However, it demonstrated poor off-road capabilities, at least compared to what was expected of it. Despite this, its overall reliability, sturdiness, speed, and long range and stealthiness in operations, proved tremendous assets which compensated for other drawbacks.
These included the unprotected floor, which was generally covered with sandbags by the crew, and lightly armored rear, turret and flanks, which required additional sandbags on top of the usual amount of various exterior equipment which was carried on every mission.
Its main armament was efficient against German light vehicles, or armored cars like the Sd.Kfz. 232 (although it could not resist armor-piercing 20 mm/0.79 in shells). It was definitely no match for the late Puma, and and easy prey for most German tanks when it was used as an impromptu infantry support vehicle. 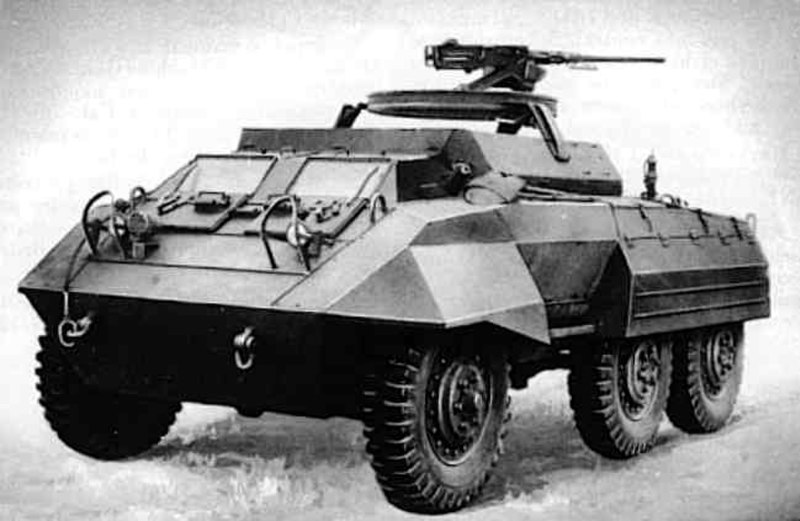 Subsequently, many of them were shifted to the Pacific theater in late 1944, soldiering in the Philippines and Okinawa, where they even reverted back to tank-hunters. Around 1000 were also sent, through Lend-Lease, to the British, Free French, and Brazilian forces.
They served long after the war with the last two countries. French M8s served during the Indochina and the Algerian war. After 1946, most of them served with various NATO armies and surplus Greyhounds were bought by many third world countries, where they were seen as cheaper than tanks. No less than 48 countries operated the Greyhound during the Cold War, some with many modifications, like the Brazilian CRR Brasileiro (1968) and the Greek M8 (Diesel) in the seventies-eighties.
The French modified the M8 with a Panhard H-90 turret, while the Colombians made an M8 TOW antitank version and modernized AM8 for anti-guerrilla warfare.

M8 during the battle of the Bulge, Ardennes forest, December 1944. 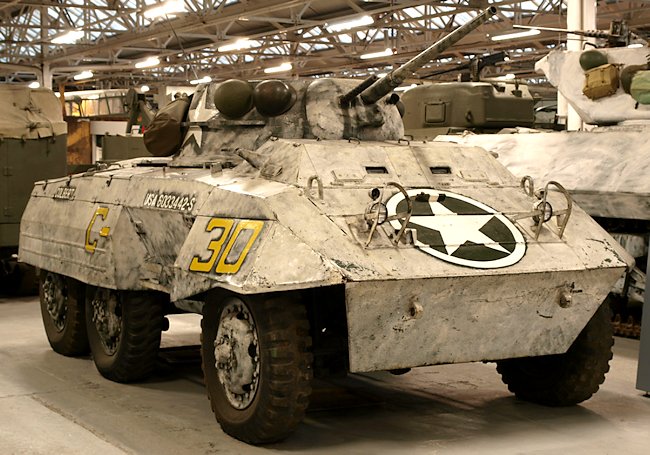 I had one of these for a short time in 1966. The top was completely open. The middle axle was disabled, strapped to underbody and wheels removed. I was stationed at Davis Monthan AFB, Tucson, AZ at that time. I was also active with Civil Air Patrol and wanted to use it for search and rescue. The AZ DMV put a squash on it. Would be registered as 3 axle commercial. Did not have license for commercial truck. Was able to get my $250.00 back from the seller. Also was informed that I was doing TDY to Barksdale AfB, LA in a few weeks. Driving that beast there would cost about 3 mo pay (just for gas). Fun while it lasted.

Thx for this insight John !

M8 was used to liberate Buchenwald concentration camp in 1945.

So, soon available for collectioners here, thanks !

The best command variant was the M8 modified by the Canadian Army for General Rockingham’s command vehicle in Korea. This was a non-standard modification. The gun was removed and the ammunition removed. More commas equipment installed. The link below gives a picture of a model of the vehicle in question.

Our father was a Scout Car Commander with the 97th CAVALRY RECONNAISSANCE TROOP MECHANIZED, 97th INFANTRY DIVISION in Europe during WWII. He was lucky his driver tested the M8 at the proving grounds. He said the first thing they did was to strip off the fenders to keep them from being pushed into the tires. They liberated Flossenberg Concentration Camp and were outside of Pilsen, CZ at the end of the work.