Up to the late 1920s, the United States military had relied on tank designs from overseas. This included the Tank Mk. VIII “International Liberty”, a World War One rhomboid style tank co-produced with the United Kingdom and the French designed Renault FT, known as the Light Tank M1917 in American service.
The M1917 served well into the 1920’s with the US Military. In 1927 the US Army designed a new tank to be built by James Cunningham, Son, and Company based in Rochester, New York (they were the first car company in the World to produce an automobile with a V8 engine). This tank was the Light Tank T1, sometimes known as the “T1 Cunningham”. It would be one of the United State’s first modern home built tanks.

“What is a modern tank?” You may well ask. The Renault FT is often considered to be the first modern tank, as since its appearance, tanks have more or less followed its general layout.This being a fully rotating turret, and separate crew and engine compartments. The T1 was America’s first tank to follow this design.

The T1 was developed between 1927 and 1932, and would go through seven variations from T1, to T1E6. Each variation would go through upgraded weaponry, engine performance, and suspension.
The anatomy of the T1 remained mostly the same through its various versions. It’s characteristics were a rear mounted turret, an engine positioned in the front, and rear mounted drive sprockets. The exceptions were the E4 and E6 models. In these models, the turret was relocated to the center of the tank, the engine to the rear and the drive sprockets to the front.
Armament was constant. The tank carried a 37mm (1.46 in) Gun, with a coaxial M1919 .30 Cal. Machine Gun mounted in the fully rotatable hand cranked turret. The armament was mounted slightly to the right of the center line. The tank had a crew of two consisting of Commander and Driver in a set up similar to the M1917/Renault FT Light Tank. The Commander was located in the turret, and also performed the role of Gunner and Loader. It was his responsibility to service the main armament. The driver was located just in front of him. 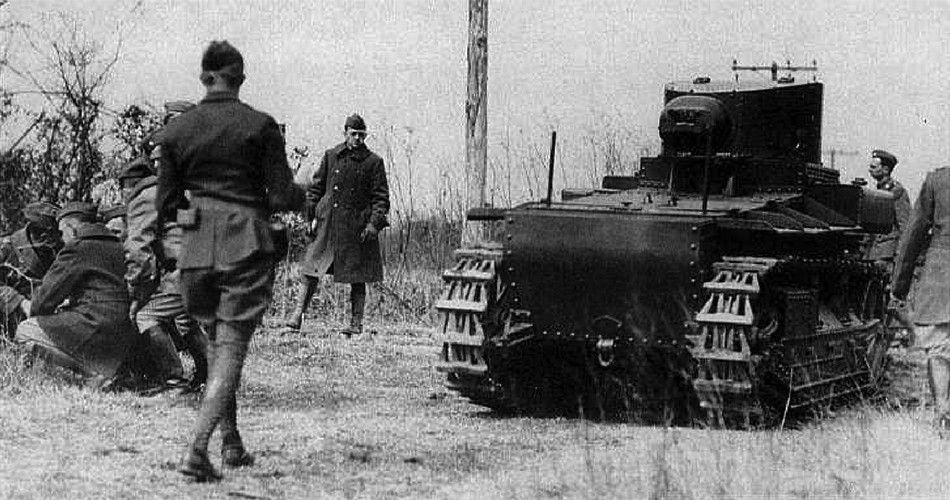 The T1 taking part in training. Photo: As taken from worldoftanks.ru

T1: The T1 made its first appearance in 1927 as a single prototype. Its main armament was the 37mm Short Tank Gun M1918. This gun was a US development of the Canon d’Infanterie de 37 modèle 1916 TRP, a low-velocity French Infantry Support Gun that was used in the First World War. The turret was roughly conical, with the roof sloping towards the gun. The T1’s armor ranged from 6.4mm (0.25 in) to 9.5mm (0.37 in) and was powered by a Cunningham water-cooled V8 gasoline engine, rated at 105 hp. This gave a top speed of 20 mph (32 km/h). It had an unsprung suspension, using equalizing links between the bogies to soften impacts, even so, it would have been an extremely rough ride over hard terrains. The tank weighed 7.5 tons.
T1E1: The T1E1 followed the original vehicle in 1928, there were few changes. The only major alterations consisted of the hull no longer extending beyond of the forward idler wheels, and the relocation of the fuel tanks to above the tracks. Speed was also reduced to 18 mph (29 km/h). Steering was achieved with a simple clutch-brake steering system. Four of these vehicles were produced making them the only T1s to see any kind of series production. The vehicle soon received the standardization designation of Light Tank M1, this was soon revoked, however.
T1E2: Like its T1 predecessor, only one T1E2 prototype was built. It saw some major changes to its offense and defense. The E2’s armor was increased to 15mm (0.625) thick, raising the tank’s overall weight to 8.9 tons. The armament was also exchanged for a Browning 37mm Auto-Cannon, which had much higher velocity than the standard M1918 gun. It is thought this gun may have been a long barreled version of the M1924. The armament was later reverted, however, with the M1918 37mm Gun being reintroduced. A new turret was introduced that was completely conical with a flat, rimmed top. It almost had the appearance of a top hat, the E2 was the only version of the tank to have this turret. The Cunningham V8 engine had its power boosted to 132 hp, giving the tank a better power-to-weight ration. Maximum speed was only 16 mph, however, due to gear ratio changes.
T1E3: The E3 was a further development of one of the four T1E1s. This variation was brought in 1930 by the US Ordnance Department. It could be considered as somewhat of a ‘Tankenstein’, as it was made up of a combination of parts from the T1E1 and T1E2. It was armed with the Browning Auto-Cannon, had thickened armor and more powerful engine of the E2, but kept the E1’s turret, hull and gear ratios. The E1’s gear ratios combined with the E2’s more powerful engine again increased the Tanks power-to-weight ratio, and increased the top speed to 21.9 mph (35.2 km/h). The major change to T1E3 came with the suspension, which was completely redesigned and featured hydraulic shock-absorbers and coil-springs. This gave a much smoother ride and better cross-country performance than the springless suspension of the previous models.
T1E4: The T1E4, introduced in 1932, was a complete metamorphosis compared to the previous models of the T1. The layout of the vehicle was changed to having a centrally mounted turret, engine in the rear and sprocket wheels at the front. It had a new suspension based on the British Vickers 6-ton Light Tank, which the US Army had previously tested. This suspension consisted of semi-elliptic leaf-springs on articulated four-wheel bogies. The vehicle was now longer than the original 12 ft 6 in (3.810 m) of the T1 at 15 ft 5 in (4.70 m). Armament was changed to the short barrel version of the M1924 Gun. The E4, at first, retained the E1’s engine. This soon proved to be underpowered so it was replaced with another upgrade Cunningham V8 rated at 140 hp, giving the tank a top speed of 20 mph (32 km/h).
T1E5: The E5 came along around same time as the E4, and was a further development of one of the T1E1 Prototypes. This model was fitted with a new steering system. Up until this model, the T1s had all used Clutch-Brake steering, which led to overall power loss when traversing the hull. This was replaced by a controlled differential steering system, otherwise known as a ‘Cletrac’ system named after the Cleveland Tractor Company who produced it. It worked by slowing down the wheels on one side of the tank, letting the faster side to swing in the direction required. Testing concurred that this was a much better method than the original Clutch-Brake, especially at higher speeds. US Ordnance promptly recommended its use for all future tracked vehicles that could exceed a speed of 6 mph (10 km/h). It is still used today on the M113 APC. The E5 was given the same Cunningham 140 hp V8 engine as the E4.
T1E6: T1E6 was the final T1 variant. This was a further development of the E4, with Cunningham Engines removed altogether. The 140 hp Cunningham V8 was replaced by a 244 hp V12, made by the American-LaFrance & Foamite Corporation, based in Summerville, South Carolina. This engine barely squeezed into the tanks engine bay, and increased the weight to 9.95 tons, even with the more powerful engine, the speed remained a controlled 20 mph (32 km/h). The T1E6 retained the M1924 main armament of the T1E4, with the same thickness of armor. However, this time it ranged from 9.5mm (0.375 inches) to 15.9mm (0.625 in). 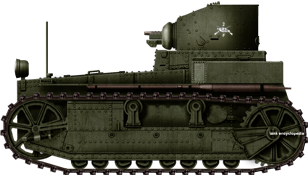 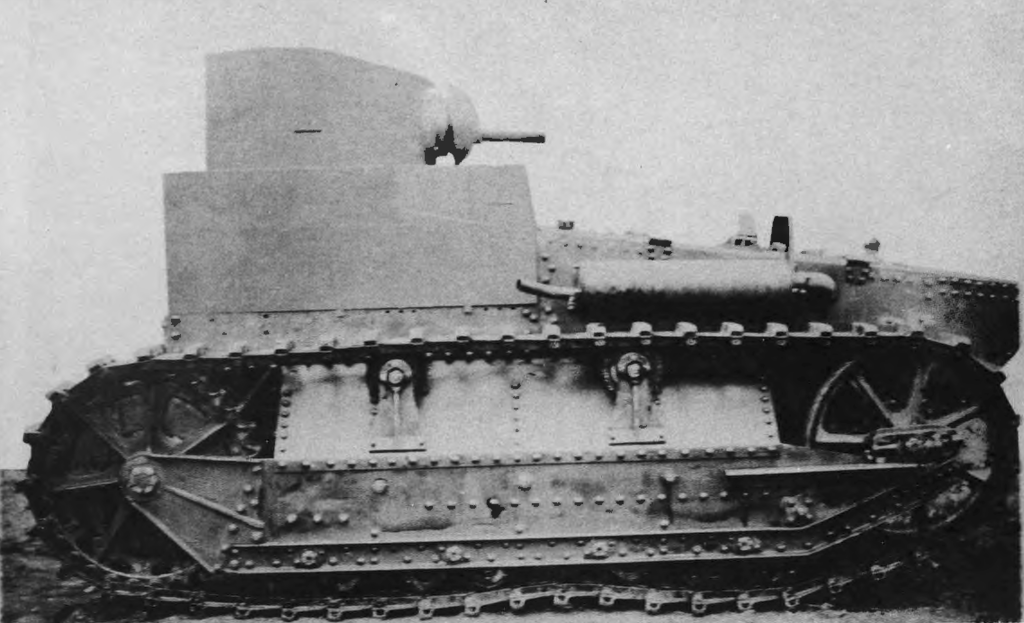 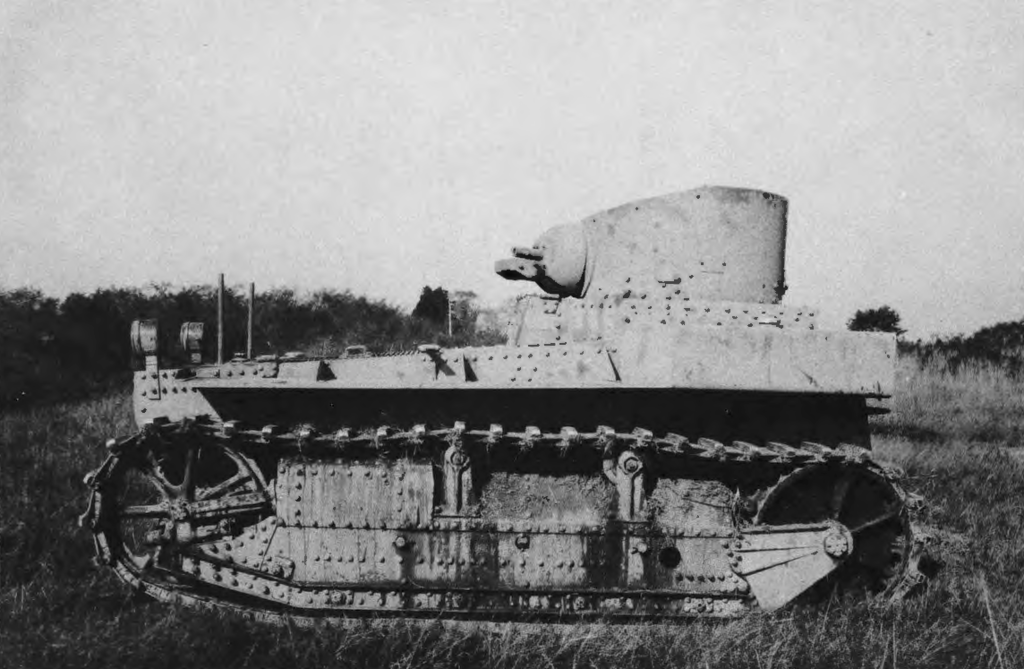 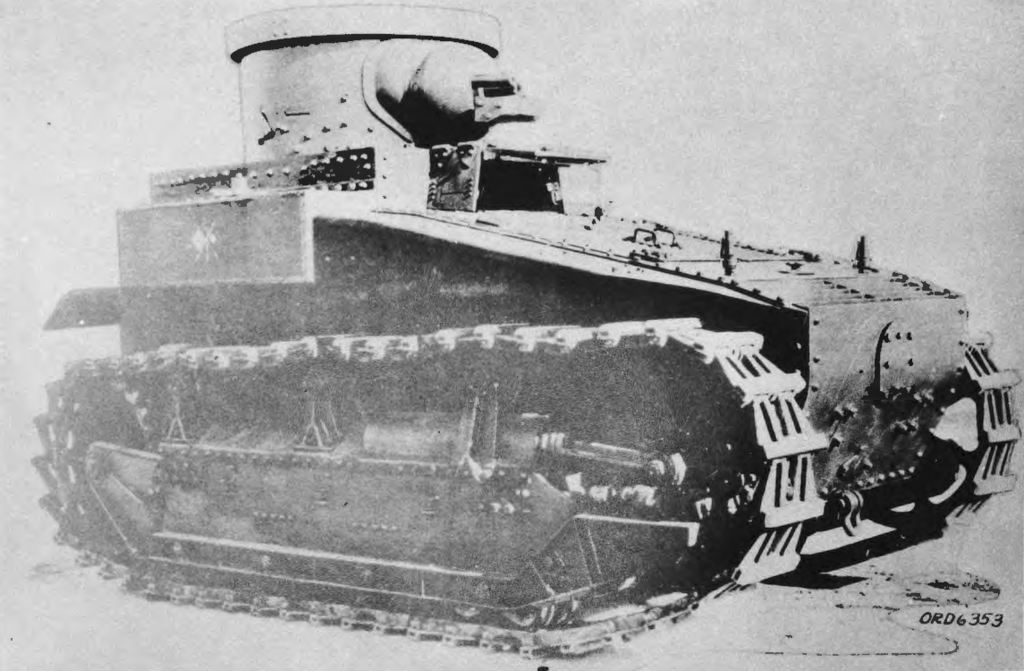 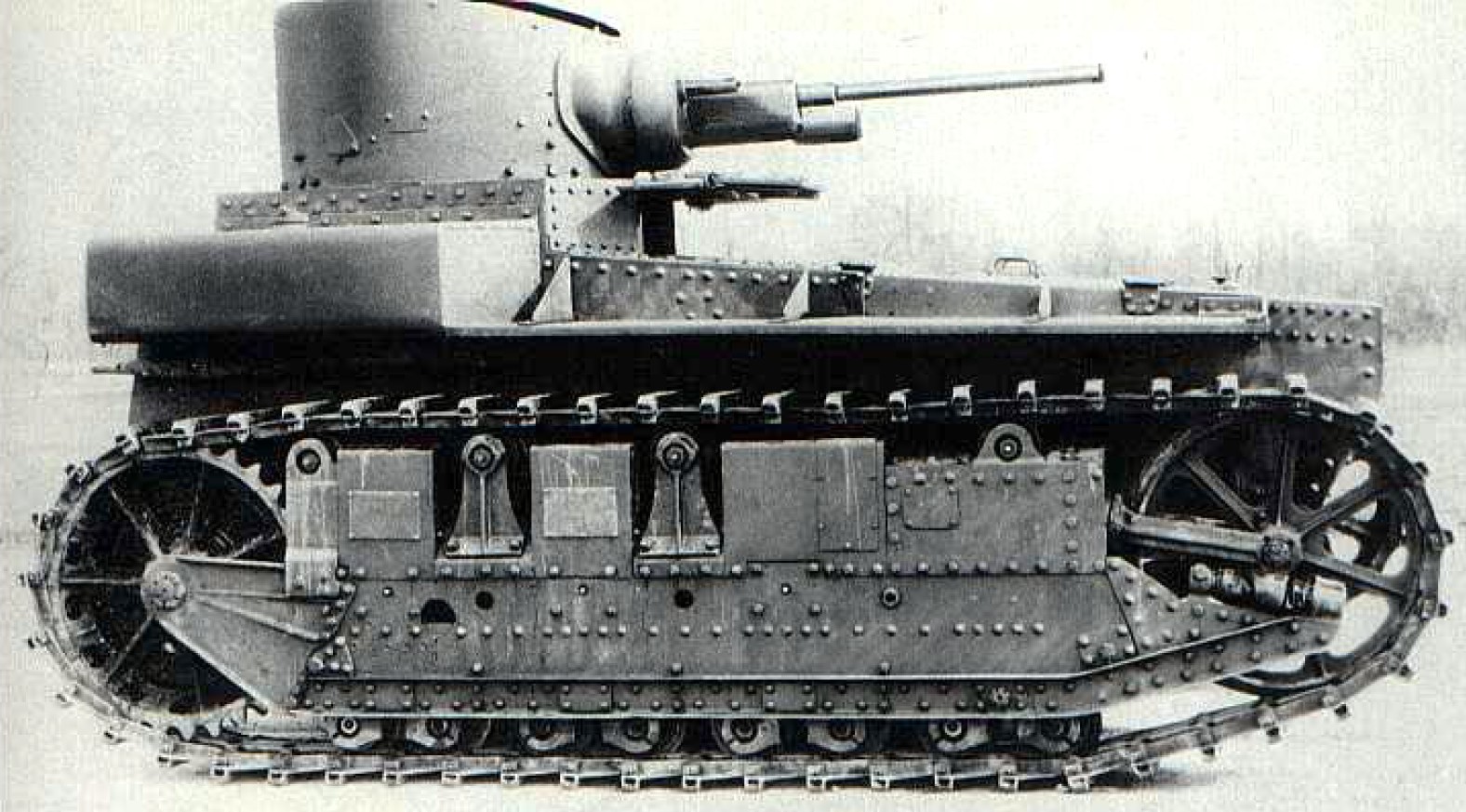 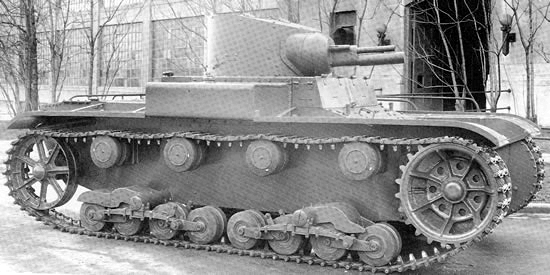 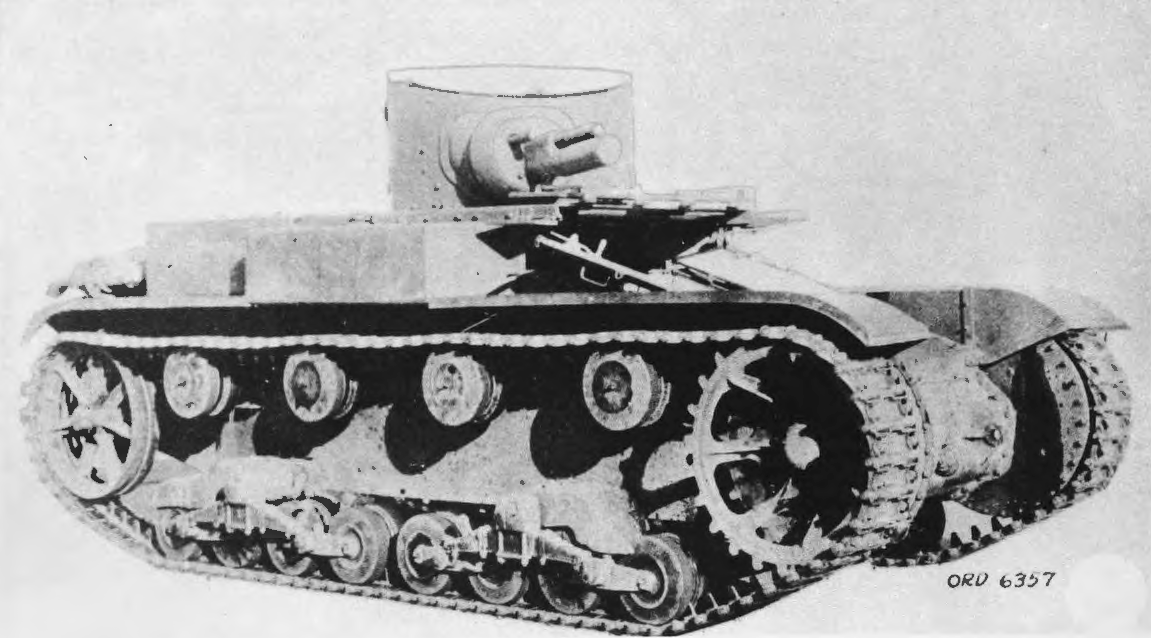 The tank would never see mass production with the four T1E1s being the most tanks in the series built. The T1 was dropped in favor of a new design by the Rock Island Arsenal, the T2. The T2 would later go onto become the Combat Car/Light Tank M1, and would pave the way for famous American light tanks such as the M3 and M5 Stuart.
Just one of the Cunningham T1 survives today. The tank had previously sat (unarmed) on outdoor display at the U.S. Army Ordnance Museum at Aberdeen Proving Ground in Aberdeen, Maryland. However, when the museum closed in 2010, it was moved to the U.S. Army Ordnance Training and Heritage Center at Fort Lee, Virginia. It remains there in indoor storage, out of public display.
The tank spawned one variant, the 75mm Howitzer Motor Carriage (HMC) T1. This was a turretless T1 hull, armed with the M1 75 mm Pack Howitzer. This also stayed a prototype, with just one model built.