After the 1932 revolution, the Siamese Ministry of Defence started looking for a new kind of weapon, wanting to establish their first Anti-Aircraft Regiment. They were interested in a new Self-Propelled Anti-Aircraft Gun (SPAAG) which was developed by the Vickers Armstrong British company. This was a derivative of the Dragon carrier which was itself a derivative of the successful Vickers series of light tanks, specifically the Mark E.
The Dragon carrier was originally intended to fill the role of an ammunition carrier and tractor for artillery pieces but the large floor area provided by the design allowed for a new open topped higher superstructure. The work was done on a Mark IV Dragon and a single QF 2-pounder Mark II ‘Pom-Pom’ automatic cannon was mounted within this superstructure, creating a flexible weapons platform. Though more than 50 of the Dragon Medium Mark IV tractors were produced, with vehicles exported to India and China, only Siam used this armed open superstructure variant. 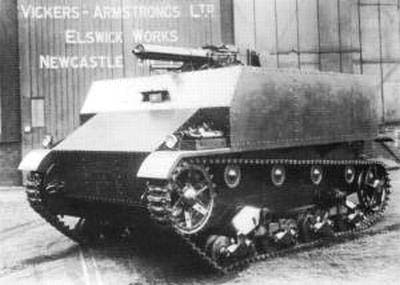 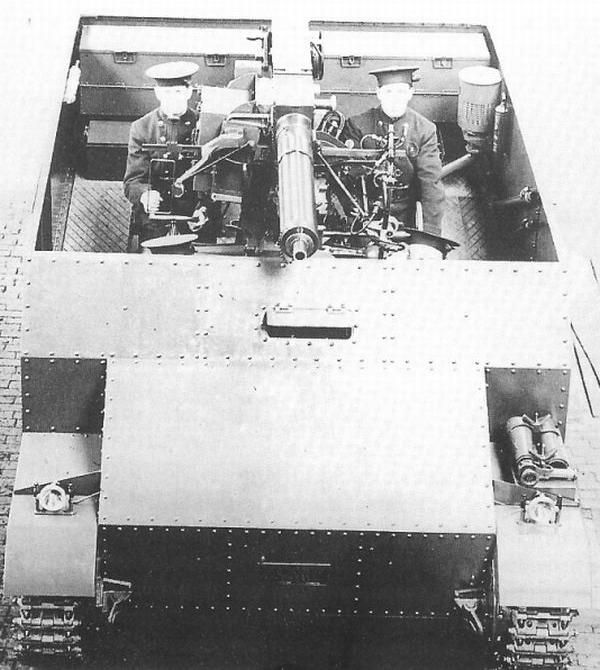 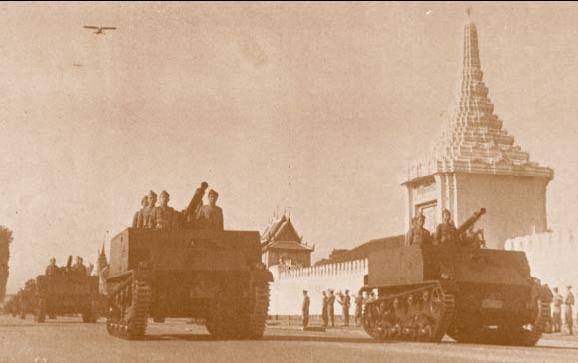 Type 76 SPAAGs on parade in front of Wat Phra Kaew, Bangkok
Siam placed an order for 26 SPAAGs via the firm of Barrow, Brown & Co. with the first 10 vehicles (1st batch) being received in August 1933. The Royal Siamese Army renamed them as “Type 76 SPAAG” (ปตอ.อจ แบบ 76 / ปืนใหญ่ต่อสู้อากาศยานแบบ 76) after the Buddhist year 2476. Some sources point out that the Type 76 SPAAG was probably the first tracked SPAAG to see series production. 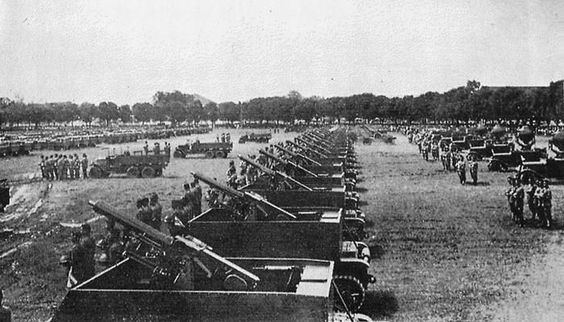 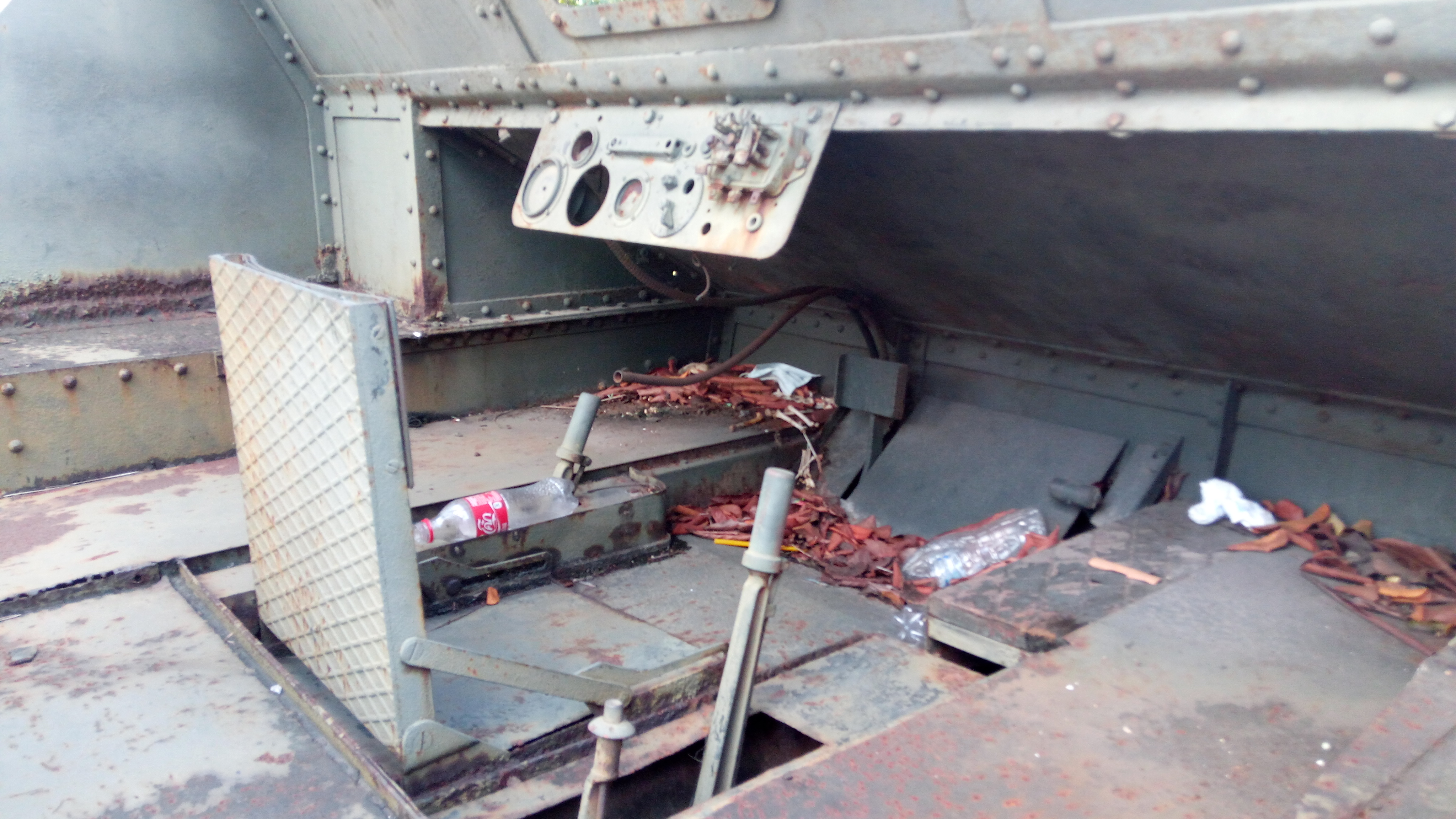 The layout of the Type 76 SPAAG was simple. The driver was seated centrally with a small visor to see where he was going. The spacious area behind the driver was open with the crew arranged around the gun, ammunition was stored in two large lockers at the back. No other armament was provided other than the crew’s personal arms. Suspension was provided by the same system as on the Vickers light tanks with pairs of bogies on sprung arms. The engine was placed low in the hull at the back to reduce height and improve balance but still had the transmission at the front. Armor was light up to just 10 mm providing protection from small arms and machine guns. 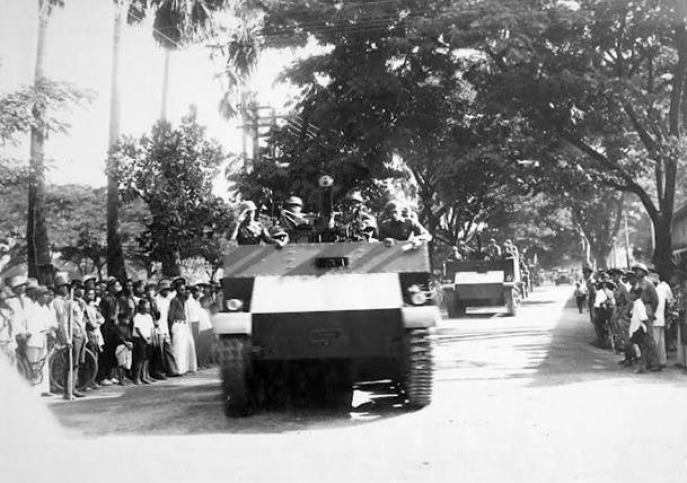 Column of Bangkok forces during rebellion.

The outbreak of the Boworadet Rebellion (กบฏบวรเดช) on the 11th of October 1933, led by Prince Boworadet, caused a critical moment for the Phraya Phahon Phonphayuhasena’s (พระยาพหลพลพยุหเสนา) government. This ‘full-scale rebellion’ consisted of 4 infantry battalions, 2 artillery battalions, and one cavalry squadron, and managed to capture Don Muang Airport.
The Prime Minister appointed Lt.Col Luang Phibunsongkhram [Phibun] (พ.ท.หลวงพิบูลสงคราม) to command the Bangkok forces. Phibun responded to the royalist rebellion by means of an artillery barrage on the 13th of October, but saw no satisfactory outcome failing to dislodge the rebel forces. The Bangkok forces then employed weaponised trains by using a Type 73 light tank (Vickers 6-Ton) placed on low sided wagon in front of the armored locomotive. It was used as a command vehicle and a wagon loaded with infantry was attached as an advance guard. However, Lt.Col Luang Amnuai Songkhram (หลวงอำนวยสงคราม), who led this unsuccessful breakthrough attempt, was killed by gunfire from a rebel machine gun nest at the Thawa Sunthon temple (วัดเทวสุนทร). 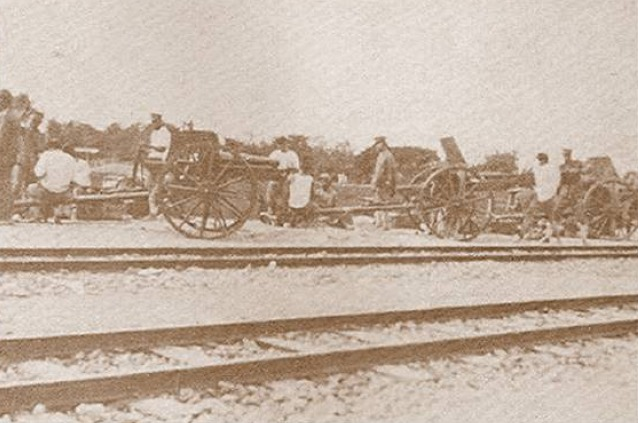 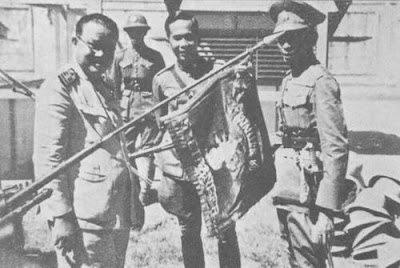 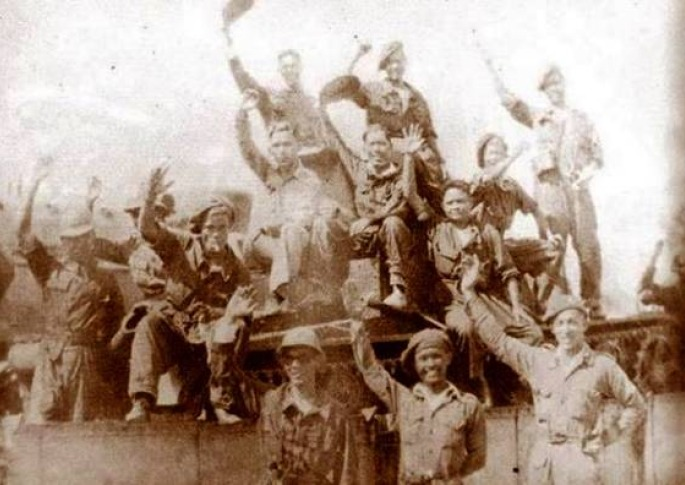 Type 73 Light Tank on rail flat car during the rebellion
Phibun changed his tactics immediately; he changed his order, placing the newly arrived Type 76 SPAAG on low sided wagons in lieu of the Type 73 light tanks. The 40 mm automatic cannon was capable of firing 200 rounds a minute, making them ideal for both an anti-personnel and an anti-aircraft role should the rebels have tried to use aircraft for reconnaissance or strafing government troops.
Lt. Busrindre Bhakdikul (ร.ท.บุศรินทร์ ภักดีกุล), who was newly graduated from the Royal Military Academy in Belgium, was put in charge of an SPAAG unit of 2 vehicles. From memory, he later recalled that the Type 76 SPAAG could easily destroy enemy machine-gun nest positions in the temple. Its frontal armor was tough enough to receive punishment from machine guns allowing the Type 76 to knock out enemy positions at the close range. On the 13th of October though, Type 76 SPAAG fired only 9 rounds. This was enough to cause the rebel infantry on the front line to retreat. After the very aggressive attack from the Bangkok forces, the rebellion HQ made a decision to retreat leaving Col.Phraya Sri Sitthi Songkhram (พ.อ.พระยาศรีสิทธิสงคราม) commanding the rear-guard. 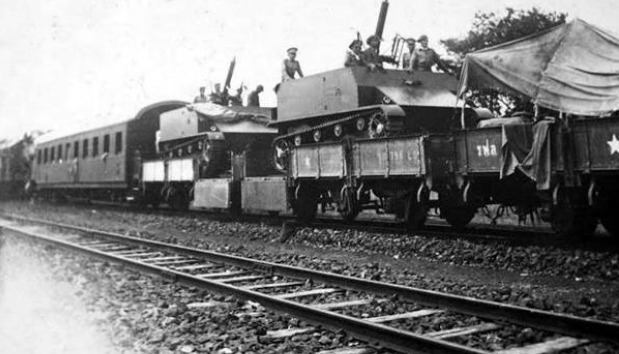 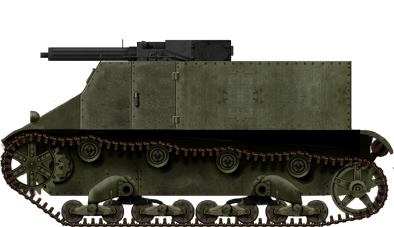 Tank Encyclopedia’s own illustration of the Type 76 by David Bocquelet, 1/72 scale.
On the 15th of October, Lt. Col. Luang Phibunsongkhram pushed much harder. A rebel pilot who came back from a reconnaissance mission reported that the Bangkok forces were preparing for a new attack. Prince Boworadet’s forces had been preparing for an attack. His officers put their hope in a Type 63 75mm mountain gun which was placed on low sided wagon like their opponent had done on the 13th of October. The Bangkok forces responded to this new threat by calling the Type 76 to the front again. Following an exchange of fire, the 75 mm mountain gun was destroyed by 40 mm HE rounds. 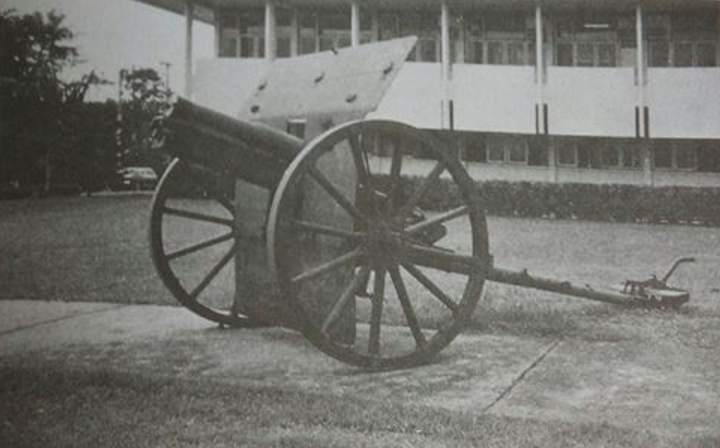 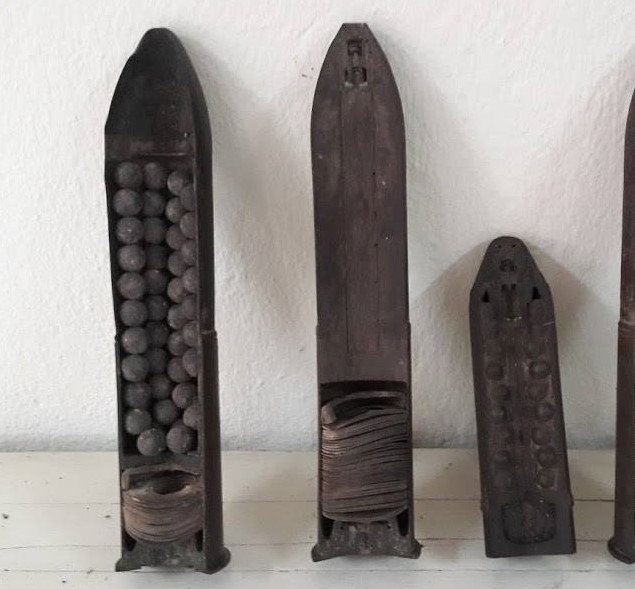 The situation got worse for the rebels. Col. Phraya Sri Sitthi Songkhram gave orders to send the Hanomag locomotive back down the track at top speed, acting as a ‘land torpedo’ to collide with the Bangkok forces troop carrier train. The train crash caused a lot of casualties for the government forces and put one Type 76 out of action in the crash. 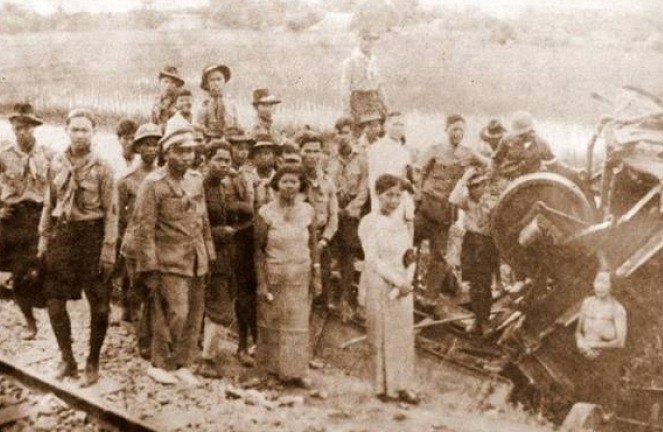 The aftermath of the train attack
The rebels were defeated at the end of October. A funeral was held the following month for the fallen soldiers. The Type 76s were used in the funeral of soldiers killed during the Royalist rebellion carrying their coffins along a route from the Equestrian Statue of King Chulalongkorn to cremation at Sanam Luang. 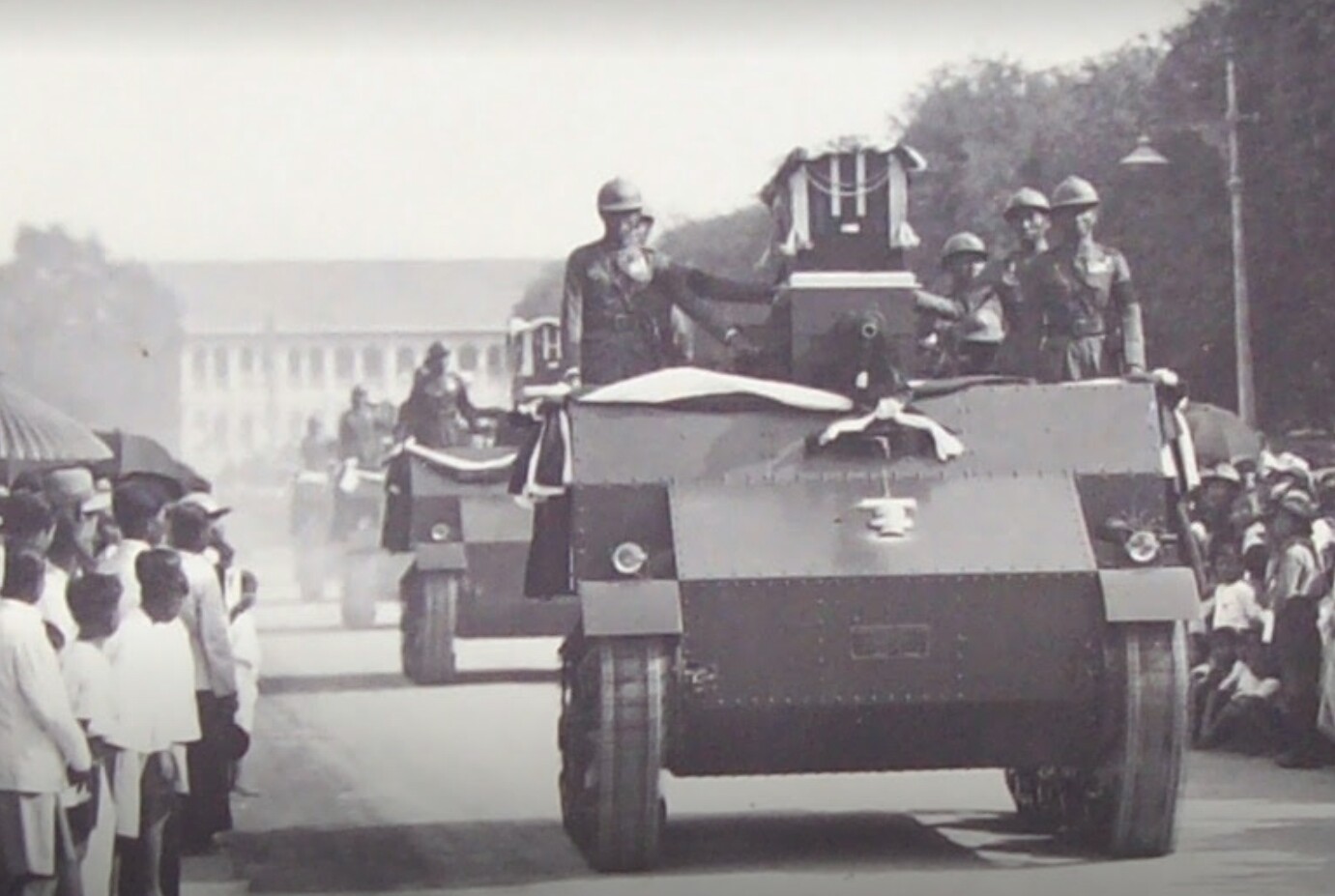 Even though Siam became Thailand on the 23rd of June 1939, the country was still facing tension with France. A pan-Thai movement led by Lt.Col Phibun, who replaced Phraya Phahon Phonphayuhasena as Prime Minister, launched a campaign to reclaim long-lost territory and unite the various Thai peoples. The 1940 invasion of France by Hitler’s Germany emboldened the Royal Thai Army (R.T.A.) to regain some parts of French-Indochina. Two battalions of Type 76s (12 vehicles per battalion) also took part in the Franco-Thai war but saw very limited action during this conflict, unlike its Vickers relatives which were used in the counter attack at Phum Preav (บ้านพร้าว).

The Second World War came to Thailand on the 8th of December 1941. Thailand was forced to accede to Japanese demands for passage through the country, allowing Imperial Japanese forces to back up their invasions of Burma and Malaya. Thailand was still unsure whether they should join with the Axis powers or not. The sinking of the Battleship HMS Prince of Wales and the Battlecruiser HMS Repulse made the decision of the Thai Prime Minister much easier. As a result, Field Marshal Phibun declared war on Great Britain and the United States on the 25th of January 1942, officially bringing Thailand into WWII.
Like other smaller nations, the RTA’s air defenses depended on the co-operative use of acoustic locators and search lights for illuminating targets at night. The RTA soon discovered that this kind of countermeasure was not good enough to protect against modern Allied bombers. High-altitude bombing by the British RAF (Royal Air Force) and the American USAAF (United States Army Air Force) meant that there was no place for a pom-pom gun in air defense. The Type 76 was already outdated for AA duty and was replaced in that role with the Type 77 AA gun. The Type 76 did remain in service until the end of WWII, however. 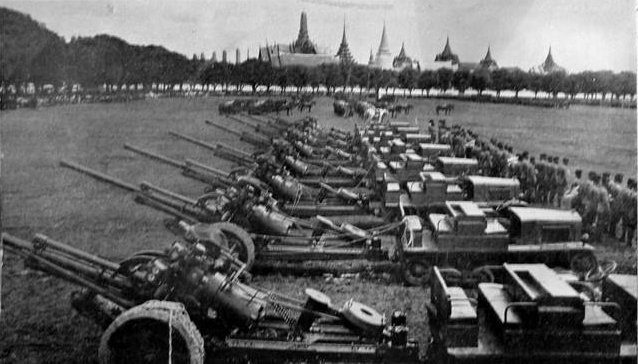 At least 7 Type 76 SPAAGs are preserved in Thailand today in museums and monuments in various conditions. There is currently some discussion ongoing about the possibility of returning one to Great Britain’s Bovington Tank Museum which does not have an example of this British export. 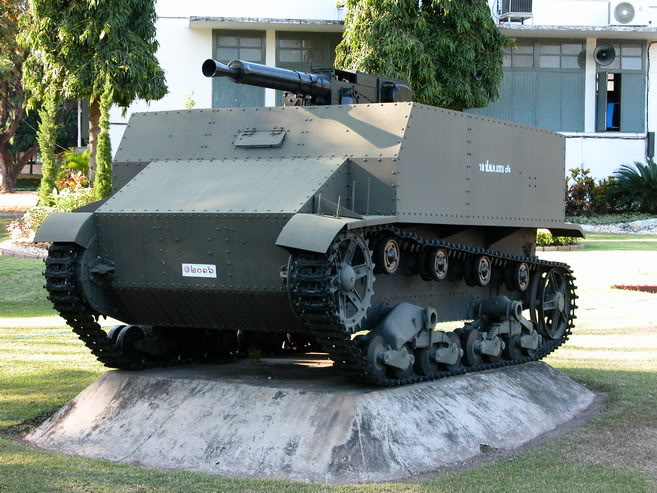 One of the surviving Type 76’s in Thailand

The author would like to express his sincere thanks to 1LT. Witsarut Lee Boonton (Historian Officer, RTA Artillery and School) and Mr. Andrew Hills for their invaluable time and constant encouragement to prepare this article.

Excellent article. But I would have expected no less.

What was the name of the closed version under Indian and Chinese service as mentioned in the article?

wow, does it really measure more than four meters?