The Civil War Heats Up

Panzer I ‘Lanzallamas’ is an unofficial name for two Panzer Is which were converted into flamethrower tanks during the early Spanish Civil War. Little is known about the vehicles due to a lack of primary sources, and as a result, there are significant discrepancies between modern sources on their history. Two different modifications of Flammenwerfer 35s were mounted onto a Panzer I Ausf. A and an Ausf. B respectively, but it seems as though neither design saw combat. The Both Panzer I ‘Lanzallamas’ were most probably only used for testing and training, likely being dismantled before the war’s end.

The Spanish Civil War is said to have officially begun on 17th July, 1936 with a rebellion from right-wing / conservative / monarchist officers in the Spanish army (who would later become known as the Nationalists) against the left-wing / anti-Catholic / pro-Soviet Republican government. However, as Stanley G. Payne notes that only by late July or early October was this uprising to become a civil war, as Franco was able to airlift (with German and Italian assistance) the Army of Africa (essentially seasoned Moroccan colonial soldiers) into mainland Spain, where the rebels began to face significant Republican and Republican-allied resistance, thus starting the Spanish Civil War.

The Gruppe Von Thoma supplied eighteen flamethrowers of three types to the Nationalists: nine standard, four light (known to be Flammenwerfer 35 models), and five heavy ‘trench’ (i.e. improvised) types. As early as mid-October, 1936, (barely three months after the initial Nationalist uprising) the Nationalists began training of flamethrower infantrymen under the direction of Commander Peter Jansa (Chief of the Condor Legion’s anti-tank artillery instructors).
The orders for flamethrower training were issued by telegram to General Varela on 17th October, 1936 and read:
“… with the utmost urgency, make the arrangements so that an officer and thirty soldiers chosen among the Banderas from those columns are sent to Caceres to be dispatched to Arguijuela [sic – Las Arguijuelas Castle] where they will be trained in the use of flamethrowers. Training timetables will be established by Mr. Thoma. Once the training is finished, they will join their units to operate these devices.”
Despite what the telegram asserts, soldiers from the Tercio (an elite unit) are reported to have actually been sent to Oropesa, Toledo (roughly 100 miles east of Caceres) for this flamethrower training. Nine days after the initial telegram, on 26th October, having apparently received their training, these soldiers were sent to the Talavera front along with their flamethrowers.
Flamethrower training was likely initiated primarily for anti-fortification (and possibly anti-infantry) purposes, as the Nationalists were acutely aware of the need to quickly and efficiently destroy any Republican fortifications, probably with the potential for a Republican version of the Siege of the Alcázar (July-September, 1936) taking place kept firmly in mind.
The use of flamethrowers was unlikely to have been conceived for AT duties, as Soviet military hardware for the Republicans arrived in Spain only from October 4th, 1936, and the first Nationalist encounter with a T-26 tank is reported as taking place during one of two Republican counterattacks as late as late-October or early December at Seseña (situated south of Madrid, and northeast of Toledo). Thus, the order for flamethrower training actually predates the Nationalists encountering serious Republican armored forces.
However, it must be remembered that there are no actual combat records of any flamethrowers in the Spanish Civil War. Although, as a point of interest, flame-based weapons (primarily local forms of Molotov cocktails, but some others including what can only be described as trench lighters known in Spain as Chisqueros) were used against the T-26 throughout the Spanish Civil War to great effect.

History of the Panzer I ‘Lanzallamas’

Two of the four Flammenwerfer 35s supplied to Spain were given to General Varela (the other two are supposedly accounted for by the Tercio). Photos (which cannot be reproduced in this article for copyright reasons) clearly show that Varela’s two Flammenwerfer 35s were different from each other – one had a short, fat barrel, and the other had a long, thin barrel. Both appear to have been, at one point or another, mounted onto a Panzer I, but from this point there is a significant discrepancy in sources regarding the fitting of flamethrowers to Panzer Is.
One account on the Panzer I ‘Lanzallamas’ comes from “Soldiers of Von Thoma: Legion Condor Ground Forces in the Spanish Civil War 1936-1939” by Lucas Molina Franco, José Mª Manrique García, and Raúl Arias Ramos. The book states that only a Panzer I Ausf. A had a flamethrower, but this is known to be untrue because of the photographic evidence.
Lucas Molina Franco (et al) then suggest that the sole vehicle was sent to the Talavera front on 27th October 1936, along with two tank companies and some anti-tank guns. However, in an earlier work by Lucas Molina Franco, “AFV Collection No. 1: Panzer I: Beginning of a Dynasty“, he actually states that the vehicle was kept at the Escuela de Carros in Casarrubuelos and never saw combat. As mentioned earlier, there is no combat data available on the use of flamethrowers in combat in Spain, and these claims cannot be confirmed.
However, another account on the Panzer I ‘Lanzallamas’ comes from “Los Medios Blindados en la Guerra Civil Española: Teatro de Operaciones de Levante, Aragón, y Cataluña, 36/39 1a parte” by Artemio Mortera Pérez. This book states that two Panzer Is had Flammenwerfer 35s installed on them in October 1936, and also states that both vehicles stayed in Las Arguijuelas Castle for training, Crucially, there is no mention of them being sent to Talavera with the soldiers from the Tercio.
To complicate matters even more, another discrepancy occurs here because footage showing the Panzer I Ausf. A. ‘Lanzallamas’ during training is reported to be at Cubas, in the north of Spain, 1937. However, this is reported by other sources to be at Oropesa, Toledo, south of Madrid.
Many of the discrepancies here cannot be resolved with current sources. Moreover, there are apparently no primary sources (such as photographs, military inventories, or even an interview with a veteran) which suggest that either of the two Panzer I ‘Lanzallamas’ models saw combat or were issued to a fighting (i.e. non-training) unit. Despite this, a general description of the vehicles can be ascertained from the few extant sources.

Due to the lack of primary sources, the design history of the vehicles is unclear, and as such, details about the decisions made around the project are also unknown. However, it could be argued that the conversion of the Panzer I Ausf. B came first, as the Ausf. A-based conversion appears to improve on two issues that the Ausf. B-based conversion suffered from.
Firstly, the flamethrower on the Ausf. B-based design appears to have been too short, so the opposite MG port appears to have been welded shut in order to prevent an MG being mounted and subsequently damaged by the flames. The Ausf. A-based design had a much longer barrel, which seems to mean that an MG could be mounted in the opposite port, and thus it may follow that the design is an improvement on the Ausf. B-based design.
Secondly, the Ausf. B-based design appears as though it could not have the MG port closed around the flamethrower (whether this is actually the case or not is difficult to ascertain, but the sole photograph seems to suggest this to be the case), whereas the Ausf. A design definitely could have all of its hatches closed. The open hatch might endanger the crew, a criticism which actually made von Thoma try to shut down the Panzer I con 20mm Breda Modelo 1935 project.
It is also entirely possible that the vehicles were built at the same time – their designs different only out of what equipment was available, as opposed to what was desired by the designers.

Fate of the Panzer I ‘Lanzallamas’

Aforementioned sources all suggest that the range of the Flammenwerfer 35 (around 20-25 meters) was considered insufficient, and this likely meant that the project was discontinued. Installation of heavier flamethrowers (of which, there was a number in Spanish hands as mentioned earlier) is thought by Mortera Pérez to have been impossible due to them not fitting in a Panzer I without the use of an external fuel tank. This can be confirmed as it is known that these were used on Bilbao Modelo 1932s (referred to in ‘Soldiers of Von Thoma‘ as “some armored trucks”), and were apparently more successful flamethrower conversions, also likely adding another reason to discontinue the Panzer I ‘Lanzallamas’ project.
The fate of the Panzer I ‘Lanzallamas’ is unknown – as stated, it is unclear whether or not either design even saw combat. According to photos, the Panzer I Ausf. A ‘Lanzallamas’ was seen as late as November 1937 during joint infantry and mechanized flamethrower training. It is unclear if the Panzer I Ausf. B ‘Lanzallamas’ was still in service as late as November 1937 because of a lack of evidence.
After November 1937, there are no more sources available regarding the vehicles, literary or photographic, and it seems as though they were most likely dismantled, if not retired, scrapped, or wrecked beyond repair.

Panzer I Ausf A. ‘Lanzallamas’, illustrated in a Buntfarbenanstrich camouflage scheme – the colour all Panzers would have been supplied in to the Nationalists.

Panzer I Ausf B. ‘Lanzallamas’. Both Illustrations by Tank Encyclopedia’s own David Bocquelet. 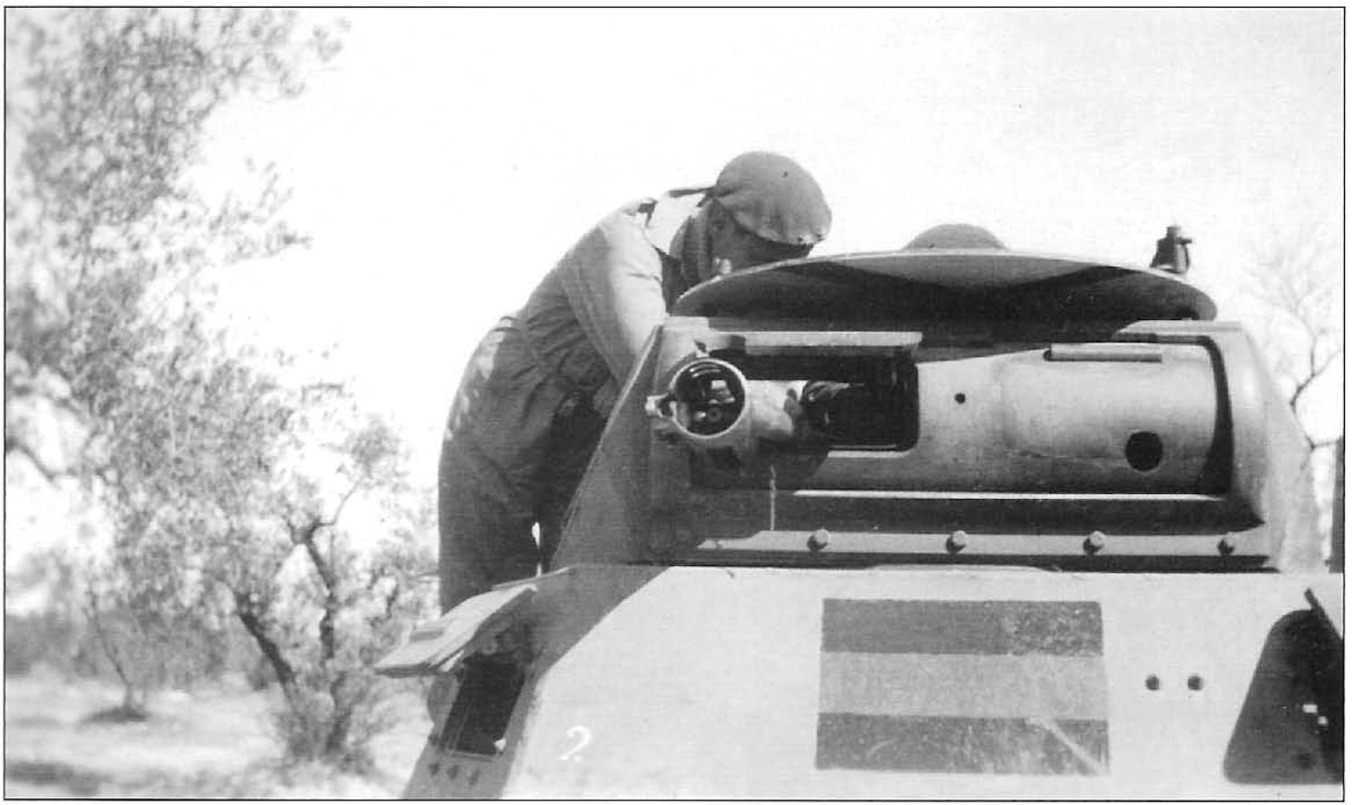 Panzer I Ausf. B based ‘Lanzallamas’ equipped with a modified Flammenwerfer 35. The left MG port appears to be welded shut, and it seems as though the right port with the flamethrower could not be closed properly because the flamethrower’s barrel is too thick. The turret is clearly marked with a Saint Andrew’s aerial recognition cross, and the hull is marked with a two-tone Nationalist flag and a small white ‘2’. The turret appears to be an Ausf. B turret, as there are no turret hooks. Source: Private collection of Ruy Aballe, as taken from “AFV Collection No. 1: Panzer I: Beginning of a Dynasty” by Lucas Molina Franco. This image also appears in “Los Medios Blindados en la Guerra Civil Española: Teatro de Operaciones de Levante, Aragón, y Cataluña, 36/39 1a parte” by Artemio Mortera Pérez. 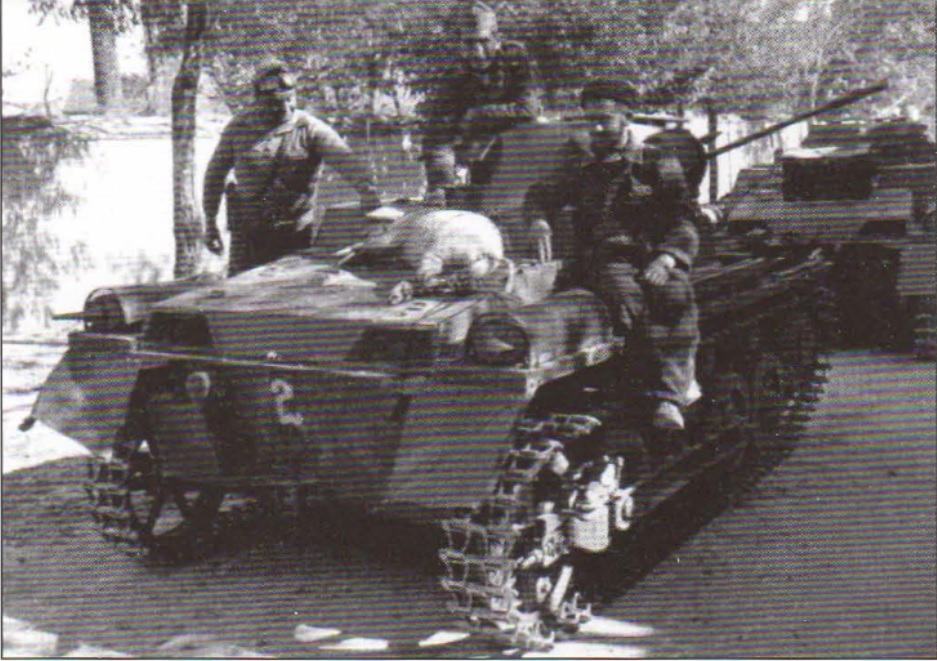 Panzer I Ausf. A ‘Lanzallamas’. The number ‘2’ in white is visible on the lower rear of the hull. The much longer barrel for the flamethrower can be seen, along with a machine gun in the left port. A pig is apparently stowed on the engine deck. As taken from “Soldiers of Von Thoma: Legion Condor Ground Forces in the Spanish Civil War 1936-1939” by Lucas Molina Franco, José Mª Manrique García, and Raúl Arias Ramos. 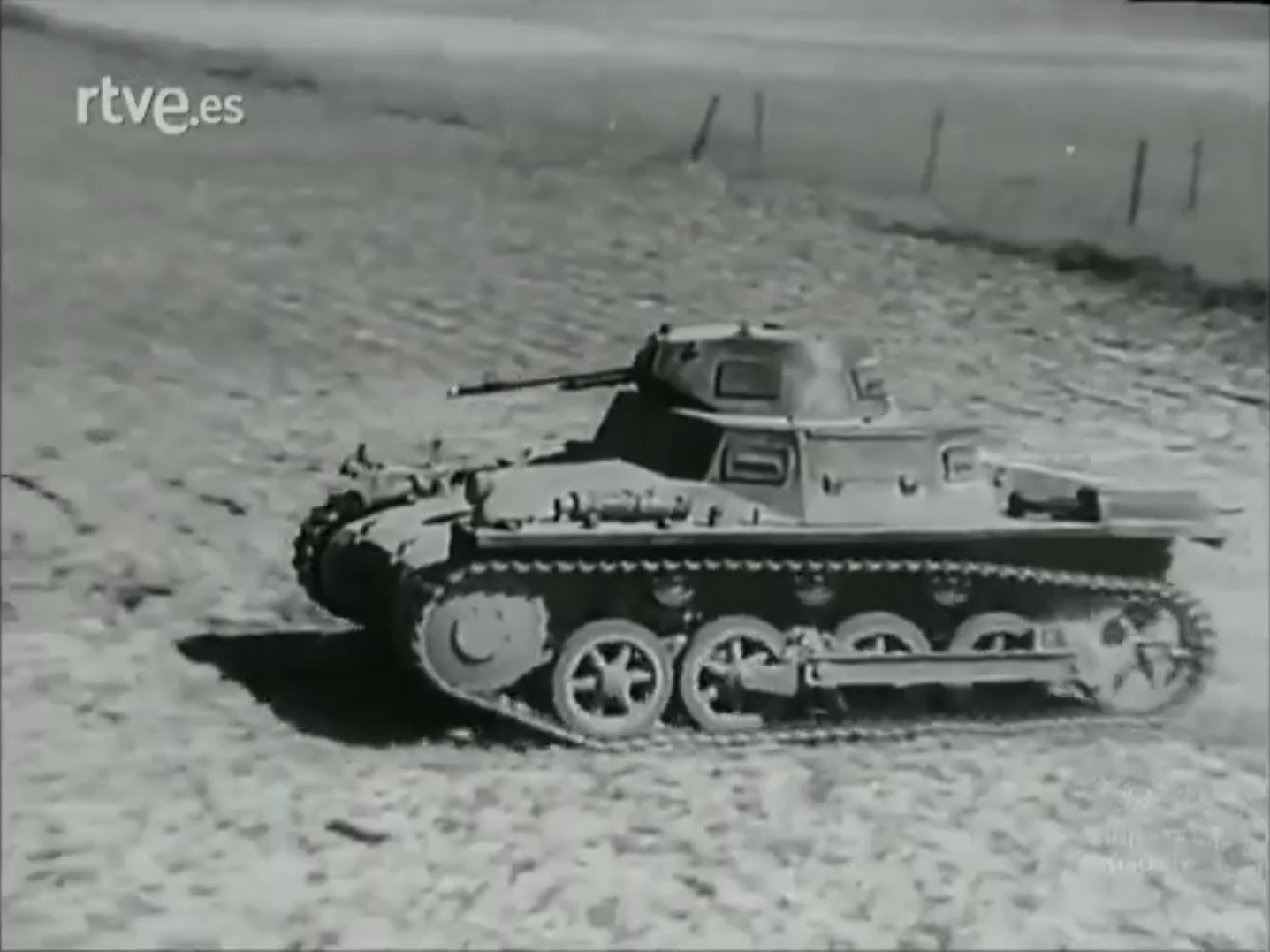 Still from footage of the Panzer I Ausf. A ‘Lanzallamas’ during training at Cubas, 1937. In this photo, the vehicle (especially the turret) is clearly painted in a usual three-tone Buntfarbenanstrich scheme. The turret appears to be an Ausf. A, as a turret hook can be seen. 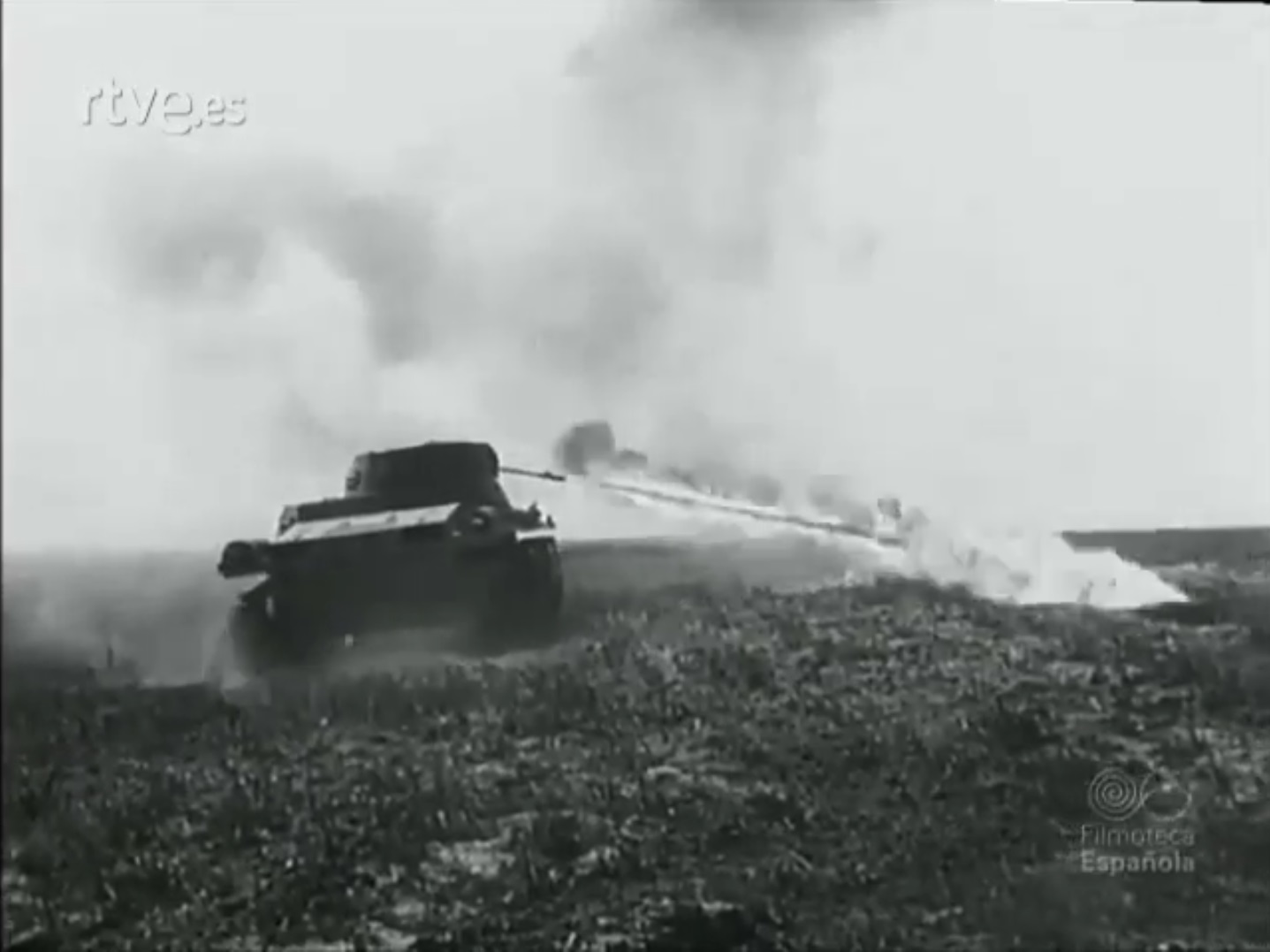 Different view of the above, discharging flames at around 20-25 meters.

Footage showing flamethrower training at Cubas, along with the Panzer I Ausf. A ‘Lanzallamas’ from 1937.

One reply on “Panzer I “Lanzallamas””

This is actually amazing, I never heard a flame tank version of Panzer I