‘We need a bigger gun’

It is often said that three years of destructive Civil War (1936-1939) left Spain with little option other than to remain, for the most part, neutral during WWII. Spain had long been considered backwards and undeveloped by European standards and seen by many as past its former glory. General Franco, who had won the civil war with the help of Hitler and Mussolini and the passivity of Britain and France, managed to keep Spain out of WWII, or so the story goes. Quite simply, Franco’s demands to join the Axis powers were too ambitious (these included taking under Spanish control Gibraltar and large parts of France’s African colonies). Franco and Hitler could not reach an agreement during their meeting at Hendaye (on the French-Spanish border in the Basque Country) in October 1940. Hitler is famously quoted as saying he would prefer to have three or four teeth pulled than to negotiate with Franco again. Whether this strategy was due to Franco’s reluctance to put his country through another war or whether he was simply hedging his bets is open to debate.  Nevertheless, 45-50,000 ‘volunteers’ fought under German colors as part of the ‘División Azul‘ while several Republicans who had escaped to France joined the French resistance.
Despite not taking an active part, Spanish military leaders and personnel paid close attention to what was occurring in Europe. The use of Self Propelled Guns (SPG´s) was one development which caused a great impression. All of Spain’s artillery at the time was towed and so, in 1944-45, the Dirección General de Industria y Matería (DGIM), a branch within the Ministry of the Army, proposed the creation of 75mm, 88mm, 105mm, and 122mm SPG´s to overcome and compensate for the lack of capable vehicles with these functions.
Apparently, the DGIM carried out experiments on a CCI tipo 37, fitting it with a 45mm gun. However, the caliber was too small and hence there was need for a bigger gun for the SPG. The project, which was to mount a 75mm gun on the CCI chassis or an alternative one was given to Captain Félix Verdeja, who had designed the Verdeja No. 1 and Verdeja No. 2 in the early 1940´s, and was approved by the Acta Nº189 on March 13th, 1945. This new task gave Verdeja the opportunity to revisit one of his previous projects, the Verdeja No. 1. 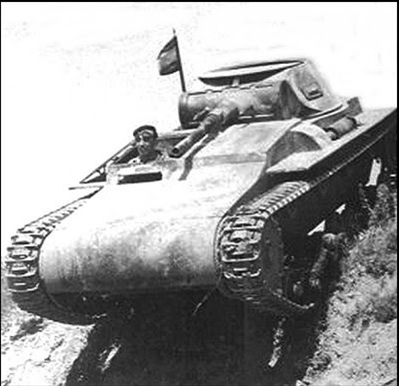 The Verdeja No. 1 was modified and converted to create the SPG version. Source: El Carro de Combate ‘Verdeja’

Verdeja set to work on the new project and envisaged removing the turret and opening up the rear of the vehicle to make space for the new, bigger gun. To protect the open area, housing the gun and the crew, a protective armored shield would be erected. Blueprints were soon completed after the project was authorized. However, to speed construction, a simpler model to the one of the blueprints was built, being finished a few weeks later. To speed up construction, it was converted from an existing vehicle rather than being built from scratch and it was finished a few weeks later. The project proved to be viable, but production of a series of vehicles would take more time.
Soon after, the vehicle was ready for testing. Its relative success during the trials could be down to the fact that Spain lacked any SPG. What is more, the chances of acquiring a better model were non-existent as a result of a ban imposed by the victors of WWII on the import of these and other vehicles. 6,000 meters was the maximum fire range achieved, which by 1946 standards was inadequate, and little more is known of the results of those trials.

Being directly converted from another vehicle, the SPG version retained several features of the Verdeja No. 1 including the suspension, undercarriage, and most of the frontal section. The turret, the roof in the rear section and the rear wall which went down to the mudguards were completely removed. 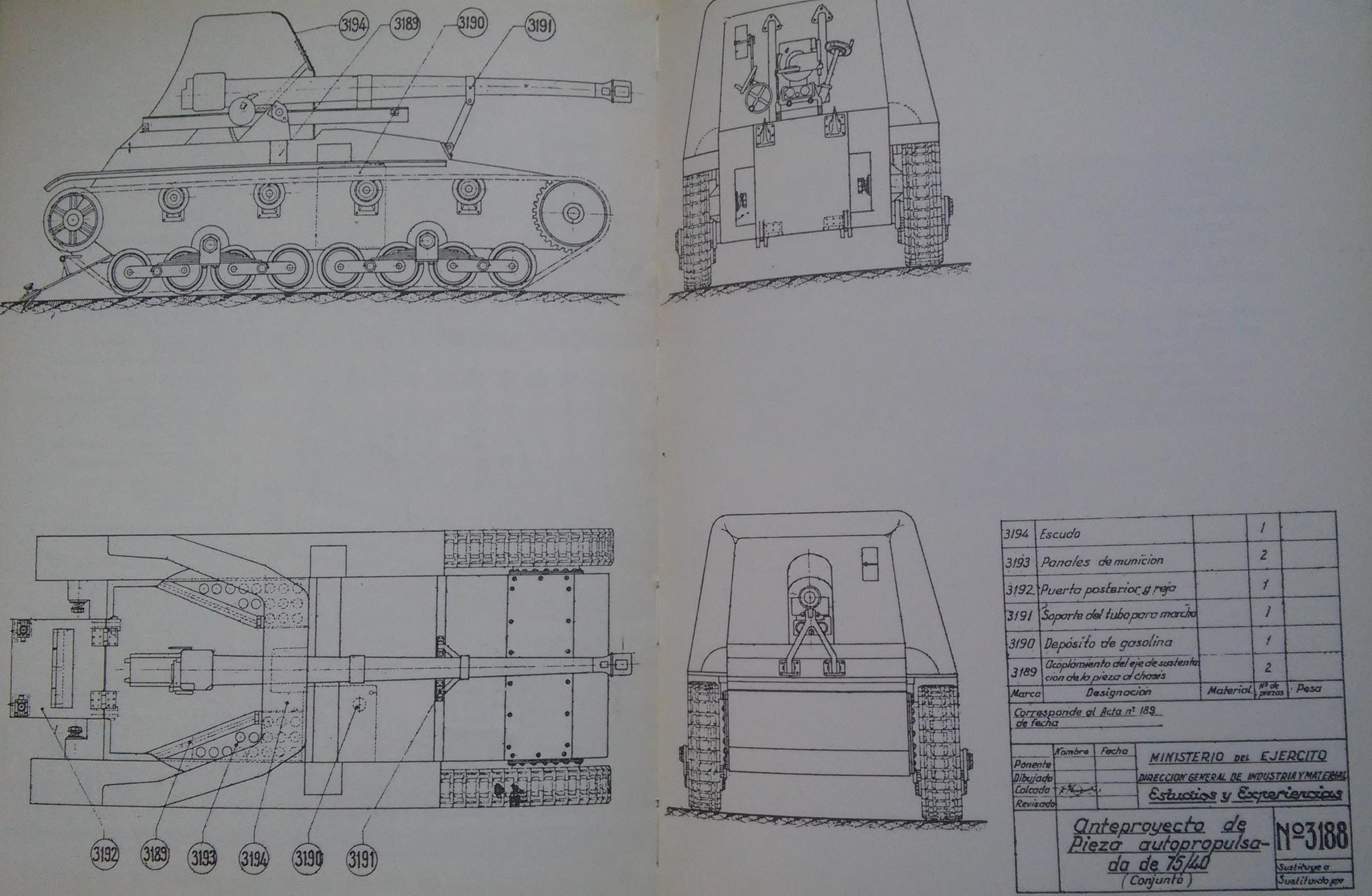 Blueprints for the Verdeja SPG. These differ from the end product as the existing version was only intended as a prototype and was rapidly converted from the Verdeja No. 1. The blueprints were intended for the production line that never happened. Source: El Carro de Combate ‘Verdeja’
The hull of the tank had a trapezoidal shape made out of steel sheets both welded and riveted, obviously not together on the same sheet, with an inclination and curvature at the front and rear and vertical at the sides. The glacis was 10mm thick, angled at 12°, the front armor 25mm at 45°, the sides 15mm, the roof was 10mm, and the belly 7mm. The front section was divided down the middle creating a further two sections. The right side housed the driver’s seat, the steering mechanism, and engine control. The driving mechanism consisted of the three classic pedals of any commercial automobile, two brake levers for the tracks, a gear lever and the various speed, oil, water, etc. gauges. The driver accessed his seat through a hatch on the top of the vehicle, next to the periscope. The other side contained the engine and its power supply and cooling system, as well as gearbox and access doors to the exterior and the right side. The fuel tanks in the Verdeja No. 1 were in the rear half section of the vehicle, so these had to be relocated because of the new functions given to that rear area. A new bigger single fuel tank was put behind the driver all the way down to the separating wall in the middle.
Its suspension consisted of eight elliptical springs connected to the main body through two rigid axes. The undercarriage was composed of an eighteen-toothed-sprocket-wheel at the front, an idler wheel at the back, eight small bogey wheels divided into two quadruple transverse even levers, and four return rollers at the top on each side. The tracks were made out of 97x 290mm wide individual steel magnesium alloy fused links. This undercarriage allowed the vehicle to cross difficult terrain with ease.
As mentioned previously, a protective steel shield was built to protect the gun and crew. It consisted of a 10mm thick plate that was mostly straight at a slight angle going up from the vehicle’s chassis until it curved at the top. The top and back were left unprotected. Of the shield’s two holes, the first right in the middle was for the gun, allowing it to be elevated and giving a small amount of traverse. The second, on the upper left hand side, was for the aiming sights. The selected gun was the RR 75mm gun produced by Sociedad Española de Construcción Naval of Reinosa in 1939. It weighed 536 kg and was 2.94 meters long, having a gun elevation of 25º, a gun depression of 0.25º with 4.5º movement to both the left and right. Judging by the writing on the gun barrel, it can be assumed that it was the third of these guns produced, as it reads: “MARCA RR SECN REINOSA 1939 III AÑO TRIUNFAL 536 Kgs. Nº 3”. When the vehicle was on the move, the gun would be horizontal laying in place in its the gun travel lock situated on the frontal plate.
A mechanical brake was built into the idler wheel which guaranteed stability when firing and avoided damage to the transmission. 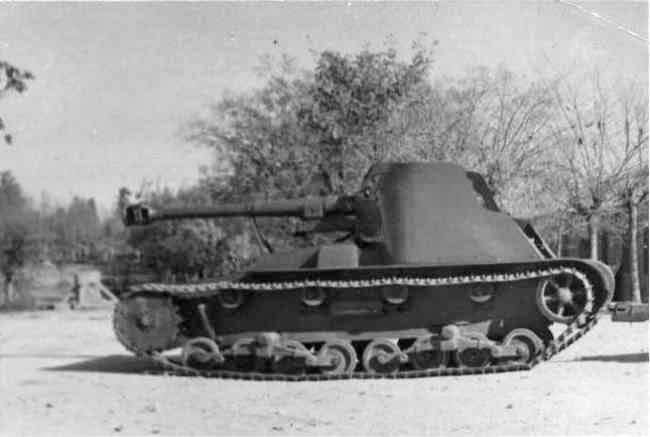 Photo of the Verdeja SPG with the gun lying horizontally in the gun travel lock. Date and location unknown. Source: SOURCE
In the interior of the fighting compartment, behind the gun there were two collapsible seats for the commander/gunner and for the loader. On each of the two walls there were four projectiles for quick use in combat. The other 24 projectiles were carried in a trailer towed by the SPG, which had a towing hook at the rear.

Reconstruction of the Verdeja SPG by Tank Encyclopedia’s own David Bocquelet. 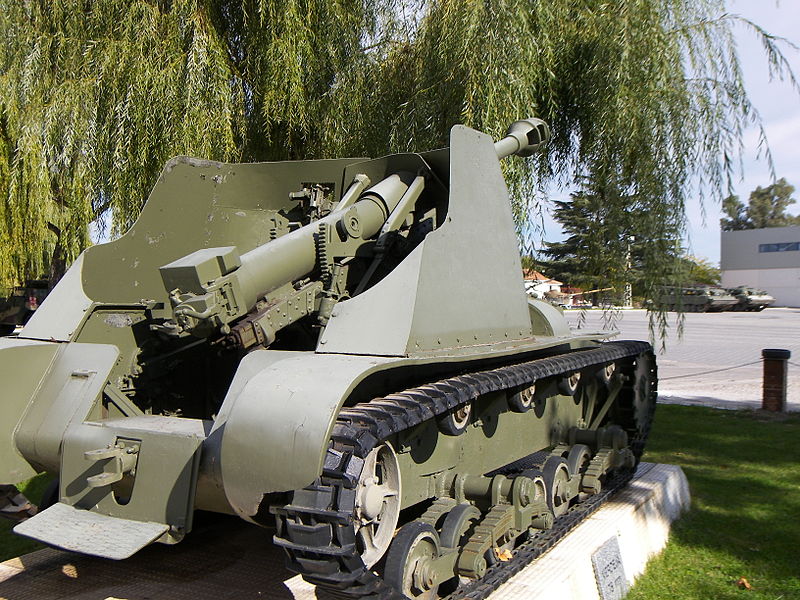 The rear of the Verdeja SPG where the interior and gun can be seen with more detail. Also note the towing hook that would have been used to tow the projectile carrying trailer. Source: https://en.wikipedia.org/wiki/Verdeja

End of the line

Despite impressing Spanish officials during trials, like the rest of the Verdeja family, it did not evolve from the prototype stage. This may be because of a lack of financial capital to seriously consider the project, as Spain had been devastated and needed rebuilding. Even so, there was less enthusiasm surrounding this project than its predecessors, probably demonstrating that although the idea of an SPG, at least on paper, seemed worthwhile, the Spanish authorities who ordered the project were not too serious about it, and the lack of mobile artillery pieces could be ignored for the time being.
Following the abandonment of the project, the sole existing prototype was left to rust alongside the Verdeja No. 2 at the firing range of the Escuela de Aplicación y Tiro de Infantería in Madrid.
In the late 1940’s, there were plans to mount an 88mm gun on a Verdeja chassis to use as an assault gun which would have had very low profile, although this project did not even reach prototype stage.
The lack of SPG capacities in the Spanish armed forces would end with the arrival of 28 M37 GMCs (Gun Motor Carriage) from the USA between 1953 and 1958. These were part of the deal reached in the 1953 Madrid Pact, an agreement to give economic and military aid to Spain in exchange for allowing the United States to use four air and naval bases on Spanish territory, in Rota, Torrejon, Zaragoza, and Morón.

Renewed interest in the Verdeja No. 2 following its appearance in a military magazine Ejército in the early 1970’s and its subsequent removal from the firing range led to the Verdeja SPG also finding a new home. This was atop a pedestal at the barracks of the Regimiento de Infantería Mecanizada (Motorized Infantry Regiment) “Wad Ras” nº 55, at Campamento (Madrid) on the Extremadura Road. When being moved with the aid of a crane, the welding between the top plate and the frontal plate where the driver’s viewing port was and the rear right mudguard was damaged. 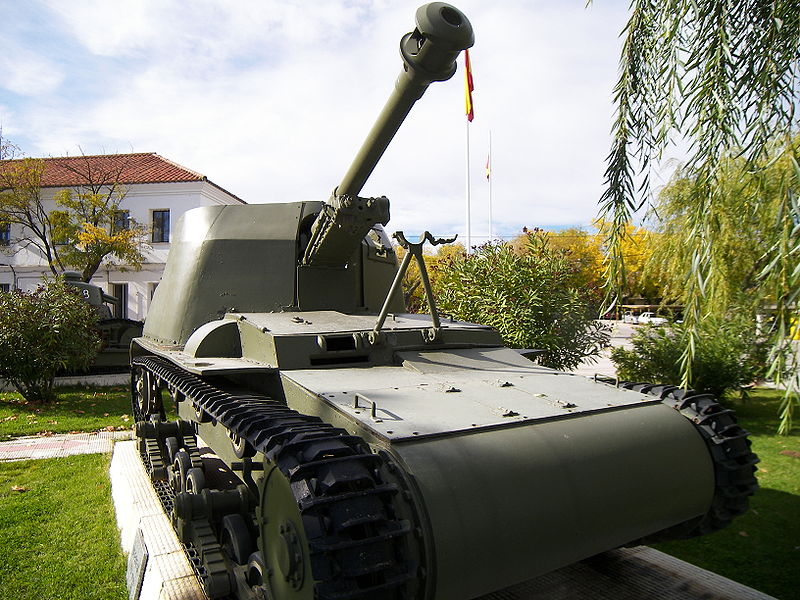 This photo shows the damage done to the welding between the top and frontal plate when moved by a crane. Source: SOURCE
In 1985, the regiment was disbanded and the SPG was transferred to the Grupo de Artillería ATP. XII of the Brigada «Guadarrama» XII based in El Goloso, north of Madrid. The vehicle was left on the barracks’ parade ground until the armored vehicle museum was opened there in 1992 with the Grupo de Artillería ATP. XII donating their prized vehicle to the Regimiento de Infantería Acorazada “Alcázar de Toledo nº 61”, who are in charge of the museum. In June 1992, it was towed by a TOA M-806 (local designation for the XM806 variant of the M113) to the south ‘garden’ of the exhibition. After many years in the same place, the vehicle became somewhat fixed to the floor, but by attaching chains from the TOA to the tow hook on the rear of the vehicle, it was moved. In May 1995, when the museum was re-planned, the Verdeja SPG was moved one more time when it became the last exhibit in the pre-1940 vehicles section, as although the design was of 1945, the chassis was built before 1940. Today, the vehicle remains at the MUMA (Museo de Medios Acorazados) in a covered section along with Civil War and WWII era vehicles proudly resting between a German Opel Blitz truck and an American M8 Greyhound armored car. 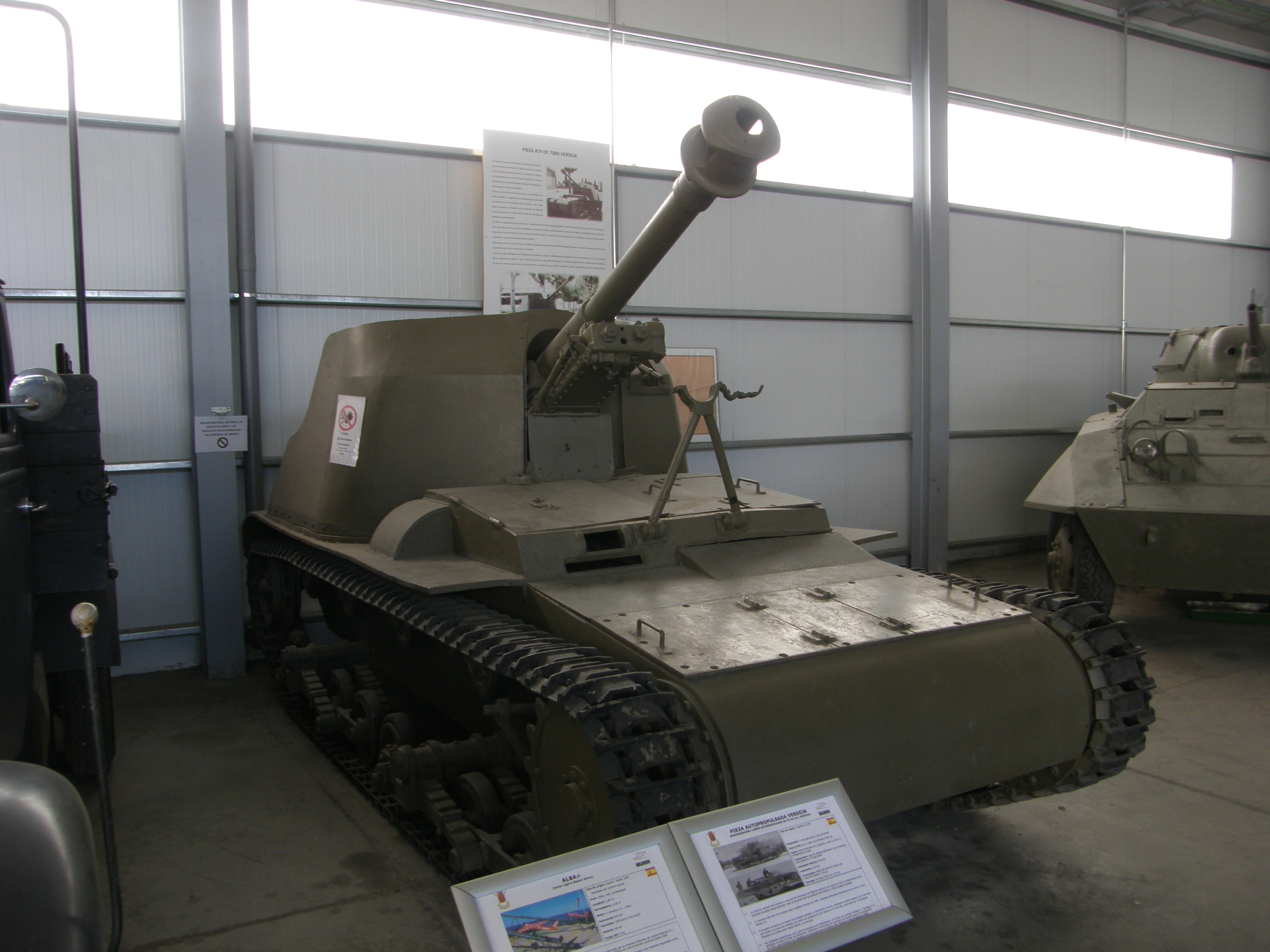 The Verdeja SPG in its current position inside the MUMA in El Goloso, Madrid. Source: Photo by author

Those “several” Republicans which joined the French Resistance are actually more like somewhere between 20,000 and 60,000 depending on the source. Not sure if they’re counting the one who joined the Foreign Legion and fought with Leclerc.