The origin of the IS-1 project came from numerous reports regarding the KV-1. Even in its faster version, the KV-1S, offered no greater fighting capabilities than the T-34, while costing much more and being more labor intensive. Stalin nearly cancelled all heavy tank development in 1943 but, in that summer, the Panther and Tiger were seen in action. Heavy tanks had to be improved, both in protection and firepower, to adequately cope with the new threats. 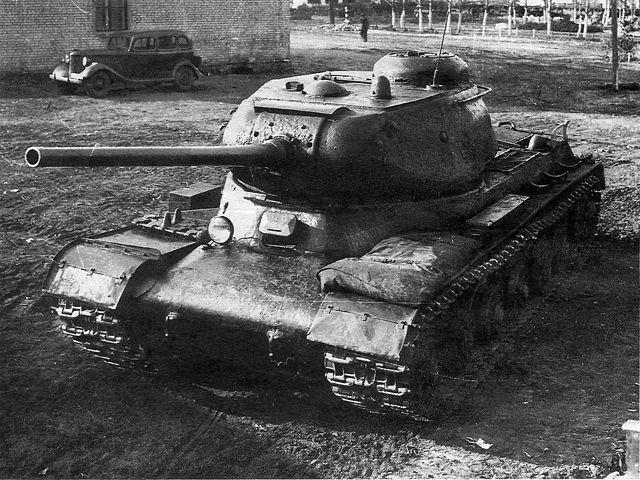 IS-85 prototype, IS-1
In March 1943, an order specified the rearming of all frontline tanks. One of the guns intended for this was an AA gun roughly similar in performance to the German 88 mm (3.46 in), of which one had been disabled, captured and the gun analysed. This resulted in the stopgap KV-85 heavy tank, only produced in limited numbers (143 machines). This vehicle set the tone for further improvements, being the basis of the long “Iosif Stalin” series. The KV-85 turret was brand new, well adapted to the new gun designs. It could hold three men, but the hull remained basically the same KV-1 flat-armored hull first designed for the multi-turreted SMK back in 1939.

The KV-13 project was launched by SKB-2, Chelyabinsk Kirov Plant’s design bureau, as early as late 1941. It tried to create a “universal tank”, a crossover of the KV-1 and T-34, resulting in the prototype Obyekt 233 tested in the spring of 1942. The tank was ultimately rejected as failing many specifications, mainly reliability, armor protection and for having a two-man turret design. However, the KV-13 program would lead to two other modified prototypes, which would serve to test the new IS-85 program in early 1943.

The new IS-85 was to address this issue with a brand new sloped hull design directly inspired by the KV-13. This was a stout armor layout designed to deflect or resist shots at all angles. However, the initial armor was designed to stop only Panzer III 50 mm (1.97 in) rounds, and needed to be massively thickened. The only strict design specification was to not exceed the weight of the original KV-1. The new armament was the same as the interim KV-85, the excellent D-5T 85 mm (3.35 in) gun, which had a far greater range and initial velocity than the previous F-34. The turret was also the same as the KV-85, housing three men, a commander cupola (rear left side) and a rear ball-mount DT machine-gun. A second one was mounted in the hull and the third coaxial with the gun, firing tracers which served to adjust the main gun. Ammo storage consisted of 59 85 mm (3.35 in) rounds and 2520 rounds for the three DT machine guns. 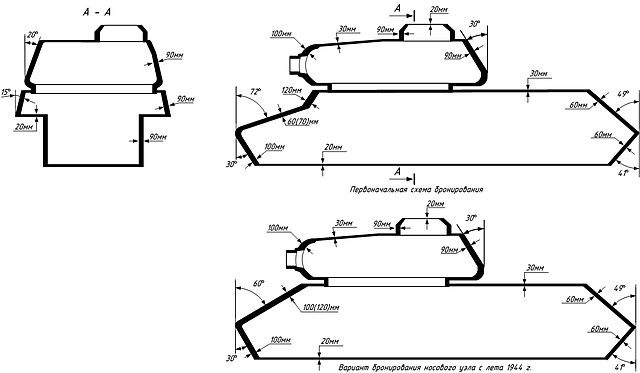 The drivetrain was essentially the same as the one on the KV-1, with large tracks supported by three pairs of double return rollers, and six double-tired wheels suspended by massive torsion arms. Like previous vehicles, extra fuel tanks were attached to the rear of the hull, while the large mudguards accommodated storage boxes. The engine was changed to the new V2-IS 12-cylinder diesel providing 520 horsepower. Top speed was 37 km/h (23 mph) on average, and the practical range only 150 km (93 miles).

Production of the IS-1

The IS-85 (Obyekt 235) prototype started its successful but rushed trials in mid-1943. Production was assumed by Chelyabinsk Kirov Plant. The first IS-1 (definitive series vehicles) rolled of the line in October 1943, but it was stopped in January 1944, as the IS-1 was quickly replaced by the all-better IS-2. Because of this, only 200 to 207 were produced. However, it was a considerable improvement over the previous KV-85 and the T-34/76. The appearance of the new T-34/85 medium tank caused the IS series to evolve, and to be logically up-gunned. So, in January 1944, many IS-1s not yet delivered to the front were up-gunned. The IS-1 also tested a new 100 mm (3.94 in) gun and went into comparative trials with the IS-122, favorable to the latter. The new A-19 122 mm (4.80 in) gun had the punch to get through the armor of a Tiger at medium range. 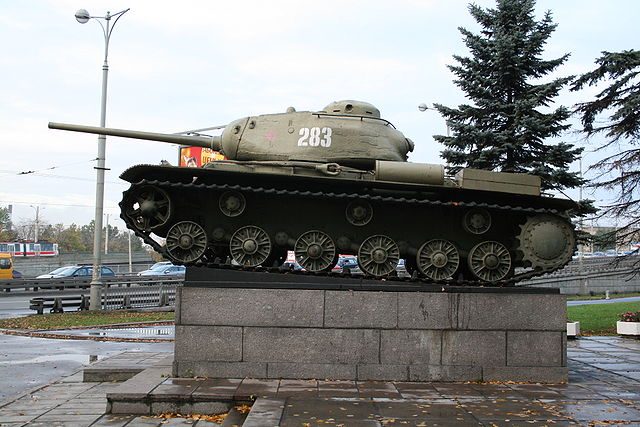 The IS-1 in action

The first IS-1s delivered were issued to Guards Heavy Tank Regiments reforming after the summer’s heavy fighting. The IS-85 was issued to the 1st, 8th and 13th Guards Heavy Tank Regiments in Ukraine. These were heavily engaged in early 1944 at Starokonstantinov, Korsun-Shevshenkovskiy and Fastov Station west of Kiev. Later on, most IS-1s were found engaged in Slovakia, and were later given to Slovakian free units during the uprising.

IS-1 links and references

2 editor: Re: IS-1 in action.
There were no IS-1 given to the free Slovakian units. In fact, it was exactly the lack of armor that contributed to a relatively quick supression of the uprising. The best they could get their hands on were old tanks of Czechoslovakian origin (like LT vz 38) and a few Panzer II Ausf Ns and Marder IIIs. There were no deliveries of armor from Soviet Union, which is understendable given that the Slovak uprising was supplied only by airplanes. Great site by the way, I know little of tanks and came here to learn to supplement my history studies. Many thanks.

Any operational information on the IS-1 in combat in Romania in 1944?

I have a pet peeve that I have noticed on illustrations of some Soviet tanks, especially those using a KV or IS hull. On most tank illustrations the road wheels on the opposite side of the hull are not illustrated, since they are completely covered by wheels closer to the viewer. On many of the Soviet tanks using KV or IS hulls, they show a portion of the wheel on the opposite side of the tank, such as what would be seen if the tank was illustrated obliquely, and not in profile. The issue is not unique to Tank Encyclopedia, I also see it in books, but I find it annoying. At first I thought that it was a suspension member that was being illustrated, but this cannot be since it is sometimes proceeds, sometimes succeeds, the view side wheel.

Hmmm, so both we and a lot of books make this ‘mistake’? Have you stopped to consider maybe it is not a mistake, but reality?

On torsion bar tanks, the wheels on one side do not line up with those on the other side.

So the tracks aren’t even? If that is the case then shouldn’t the track on one side of the tank be forward of the other side? That should be visible in the illustrations, but I don’t see it. Also, wouldn’t that make the tank always pull to one side when moving.

Nope, there’s like a 10 cm difference between the two. Yes, the track should also differ a bit, that is a good point, although the effect would not be that pronounced.

The difference in positions is small enough that it doesn’t affect steering.

I guess I didn’t understand what torsion bar suspension was, but I do now. There are some cool videos for large scale r/c tanks with functional torsion bar suspension, which I’m sure is not identical to the prototype but close enough to see how it works. You guys should have a section where you describe the evolution of different technologies in AFV development: suspension, optics, armor,… the list goes on.

“One of the guns intended for this was an AA gun roughly similar in performance to the German 88 mm (3.46 in), of which one had been disabled, captured and the gun analysed”

So how did the Soviets managed to capture a disabled 88? This is sort of an error because the Soviet 85 was designed in 1939, a few years later the war in eastern front started. Unless they captured it in the other side of the front, or asked one from the allies.