One of the first medium tanks

The T-28 is almost a footnote in Soviet tank production compared to its little brother, the T-26. However, it was the first truly indigenous Russian design and one of the first medium tanks ever built in the world, at least in a large-scale series. Based on a specification, in 1929, for a pure infantry support and breakthrough tank, able to deal with fortified positions and for exploitation by mechanized brigades. Its cavalry equivalent was the BT. The T-28 inherited the Soviet interest for British -and especially Vickers- ideas, which started with the licence-built T-23 tankette. Influences were mixed, but clearly the main inspiration was the British A1E1 Independent medium tank design from 1926.

Although this prototype gave birth to a mediocre three-unit series of the Medium Mk.III, the multi-turreted tank concept quickly became popular. As the A1E1 was secret at the time, all available data was provided through Soviet intelligence. The idea pleased Stalin enough to order in parallel a heavy model based on the same design, the T-35. The latter, of dubious tactical use, was more useful for propaganda purposes on public display, newsreel footage and the Red Square parades. Both, alongside swarms of light T-26s and BTs, would carry the bulk of the Soviet armored might until 1941.

Cutaway technical drawing of the T28. Credits unknown, possibly based on factory blueprints.

Chief engineer S.Ginsburg, of the Kirov "Bolshevik" Factory in Leningrad, was charged in 1930 to design a Russian prototype based on the British A1E1 concept. It was ready in 1931. It was preceded by several prototypes (T-12, T-24 and TG), and passed all trials in 1932 with success. It was accepted by the Red Army in August 1933. As an infantry tank, the T-28 was deemed relatively slow but well-protected, with quite impressive firepower, distributed among two forward auxiliary turrets, with 220° traverse, each flanking the main cylindrical turret. This was shared with the T-35, based on the T-26 turret design (model 1931), at first equipped with a 45 mm (1.77 in) field gun, but later modified to carry a larger, low-velocity gun, the 76.2 mm (3 in) KT-28 howitzer.

It carried only 70 6.2 kg HE rounds and was flanked by a coaxial DT 7.62 mm (0.3 in) model 27 machine-gun. At 25° elevation, maximal range was 7125 m (4.42 mi). From the 1938 model (T-28B), a gun port was also fitted to the turret basket, for a single rear DT machine gun. Later on, the commander cupola was equipped with a rotating, high angle AA mount, sporting a fifth DT 7.62 mm (0.3 in) model 32. It was then the first large-scale production tank equipped as such, worldwide. Normal provision was 8320 rounds in all. The main turret had a turning stage (the crew turned with it), and all turrets received small vision slits on each side.

T-28 of the 1934 type (short-barrel) during the Red Square parade. Notice the red star (removed later) on the storage box and the early horseshoe radio.

The engine was colossal for the time, a gargantuan air-cooled V12 boasting a 48 liter capacity, developing 500 bhp (373 kW). This V12 M17 was a famous aircraft engine, notably propelling the Tupolev giant planes and nearly all Russian bombers until late into WW2 (27,000 were manufactured by Factory No.26). The German BMW VI was its main basis. The idea to use an aircraft engine was not new, as it provided enough couple, was relatively lightweight, shared many parts with large-scale production and meant easier maintenance as well as cost efficiency. It really made the T-28 a precursor of many aspects of the medium tank breed to follow. Its main drawback was that the high-octane gasoline was volatile and highly flammable.

It had 30 mm (1.18 in) maximum armor (around the frontal and side glacis), sufficient to stop most field artillery shots and the standard AT gun of this era (37 mm/1.46 in). The T-28, with a 18 hp/ton ratio, kept good performances at the same time, better than many foreign infantry tank designs. It was already a good-all-around compromise, at an upper level than the T-26. The prototype had a crew of five and was capable, with limited protection, of speeds up to 37 km/h (22 mph), but the series model (T-28A) had a new set of twelve bogies and four return rollers and reinforced frontal protection.

The suspension of the T-28 was a rather traditional design, with twelve bogies with a pair (front and rear) or quad rubberized small road wheels, suspended by plunger coil springs without shock absorbers on each side. The ground clearance was around 70 cm (2.3 ft). Traction and length were sufficient to climb 20° slopes, clear 80 cm (2.6 ft) high obstacles and to cross 4 meter (13 ft) long trenches. The T-28 was capable to ford 1.5 m (5 ft) deep rivers as well. The suspension was usually protected by 20 mm (0.79 in) thick armored side skirts with mud chutes, which additionally protected the hull itself.

The relatively narrow tracks (45 cm/17.7 in) circulated between the rear drive sprockets and the front idler wheels, on four return rollers. The engine was situated at the rear of the main fighting compartment, behind the turret, and the transmission and gearbox were located at the extreme rear, under a large and prominent canopy for easy access, with fuel tanks on each sides. The gearbox had a lock that prevented the shifting of gears without the main clutch being engaged. The transmission tunnel was relatively short due the distance between the drive sprocket and engine. It completely separated the forward fighting compartment from the engine and transmission, helping to keep noise lower than usual, and to maximize space for the crew and ammunition. Due to the position of the turrets, the driver sat in the center, right on the tunnel transmission. Two gunners manned these small turrets and the main one housed the main gunner and commander, with the loader below. All tanks were initially fitted with a 71-TK-1 radio set, replaced in 1935 by a 71-TK-2 model. In 1933, it was an outstanding feature.

T-28 final production line at Kirov Factory, Leningrad. Radiators are mounted and side skirts are not fitted yet.

The next evolution was the T-28 model 1938 (T-28B), with a L-10 76.2 mm (3 in) gun of longer caliber (from 16.5 to 23). This meant quite better muzzle velocity. It was served by a gun stabilization system devised by A.A. Prokofiev, which gave both some real antitank capabilities and a total 60° of elevation, which provided greater range. The turret has still a limited traverse of only 60°. A large turret basket was fitted, with a machine-gun ball mount.

Propulsion was also improved by the adoption of the next M17L engine. By then, the T-28M (known also as the T-28M-1, T-28 Model 1938) was also produced locally by the Red Putilov Factory. With the light of war experience in Finland came the model E (or officially C), for "Ekanirovki", with extra appliqué armor. These 50 mm (1.97 in) panels were bolted on the hull glacis and turret, providing an armor upgrade to 80 mm (3.15 in), but the weight also rose to 32 tons. This meant that the top speed plummeted to 23 km/h (14.3 mph) at best. This model was produced in 1940 in limited numbers. At the end of the year came the last evolution of the series, the model 1940 or "D". The last batch of 12 units was equipped with the conical, sloped turret of the late T-35.

As it was the most sizeable tank in the Russian arsenal by 1935 (outside the non-standard T-35), the T-28 served as a basis for many prototypes. Several self-propelled guns, like the SU-8, fitted with a 152 mm (5.98 in) naval gun or a 76.2 mm (3 in) long barrelled AA gun (model 1931), a bridgelayer tank (the IT-28), a mine rollers tank and a flame-throwing variant (OT-28). But it also became a testbed for new suspension designs, which led both to the development of the KV-1 and the T-29. The former saw fame and a large-scale production, but the second, although incorporating many interesting aspects around an adapted Christie suspension, never left the experimental stage. However, this led to a series of experiments which ended with the T-34. So as it was, the legacy of the T-28 gave birth to both most famous and successful Soviet tanks of the war. The main drawback of the T-28 was its dated conception (the multi-turreted fad was a short-lived concept), limited main turret and obsolete suspension (by 1940), which proved not adaptable to better armaments. 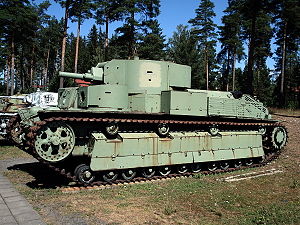 In 1939, normal provision for heavy armored brigades was 136 T-28s and 47 BTs. First actions were staged in 1939, when most units were posted on the southern front, in Ukraine. There is some evidence that a single T-28 was used during the Spanish Civil War. Many were committed with the Far East divisions, on the Sino-Mongolian border, against the Imperial Japanese Army. They fought during the "Nomonhan incident" and in several other border clashes in August-September 1939. In September 1939 some central front units, equipped with T-28s, invaded Poland. Only the Polish 7TP and Bofors 37 mm (1.46 in) AT gun proved a threat. Loss records are not known.

Next actions came with the Winter War (Soviet invasion of Finland), when they were thrown in large quantities against the fortified Finnish lines of defense. Around 200 were lost due to AT guns, in ambushes or against defensive direct fire. Most were recovered, repaired and reused, sometimes for more than five times during the campaign. The Finnish troops managed to capture seven of these, and reused them. They were nicknamed "ostivaunu" (wagon coaches). The lack of armor appeared so vivid in these losses, that the T-28M (or T-28E), with appliqué armor, was quickly produced, and many retired vehicles received additional upgrades. These up-armored T-28s took part in the large-scale offensive against the Mannerheim line in early 1940, and successfully broke through the Finnish defenses, silencing blockhouses, pillboxes and fortified gun positions.

In June 1941, 411 T-28s were reported in active units on the western frontiers. Most were lost during the first two months of Operation Barbarossa due to enemy action, but also mechanical breakdown, caused by a chronic lack of spare parts and overall poor maintenance. The Germans captured at least one of these, as well as the Hungarians, as photo testified, painting large white crosses on the turrets. Their denomination was Beutepanzerkampfwagen T-28 746(r). The remainder of these tanks fought during the winter defense of Leningrad and Moscow. By 1942, they were hopelessly obsolete and spread among training units or dismantled, their parts reused in armored trains and fixed defensive positions.

Two T-28s seem to have been sold to Turkey, which operated them with the 1st Tank Regiment of the 2nd Cavalry Division based at Luleburgaz. The T-28, due to its long years of service, has been dubbed "Tri-Tankista" (three tanks craft) and Betka or Betushka (the beetle). Many survived to this day in museums, like two at Parola (Finland), and one in Moscow.

An early model 1933 T-28A with the short barreled, low velocity gun. It was retrofitted with the 1934 turret basket, rear ball mount and AA mount. It also has the "horseshoe" radio type antenna. Manchuria, battle of Nomonanh Plateau, August 1939.

A model 1938, or T-28B, with the longer barreled gun, which had some, if limited, AP capabilities. Invasion of Poland, September 1939.

A model 1938 T-28B, here in washable winter camouflage. Many of these were lost during the early stages of the Winter War in Finland.

A late T-28E (upgraded with appliqué armor), available when the invasion came in June 1941. Up to 35 extra panels were welded, 23 to the hull, 8 on the main turret and 4 to each auxiliary turrets. Many tanks were camouflaged in the summer of 1941. This is one from the 220th Armored Brigade, belonging to the 55th Infantry Division, in the summer of 1942.

A captured Finnish T-28M. Most kept their washable winter camouflage, but were later repainted in Finnish field green, a pale watergreen, for summer operations. Finnish models had extra protection on the external gun mantlet.