By the mid-war, the KV-1 could be considered outdated. Its 76 mm (3 in) gun was not as effective as it was in the early war. The Soviet Union needed a new heavy tank comparable to the later models of the Panzer IV or the Tiger. In 1943, Kotin’s famous technical bureau was split in two - one half was to work on a KV based heavy tank stopgap, and the other was to work on the KV-13 project. The team had already worked tirelessly on the KV-1S that, whilst produced in large numbers, was largely hated by tank crews and officers because it attempted to be as fast as the T-34, but have armor as strong as the KV-1, something that was impossible. The typical Soviet heavy tank certainly needed a new gun, and the KV-13 was to be the answer to this, but a stopgap was needed in the meantime. 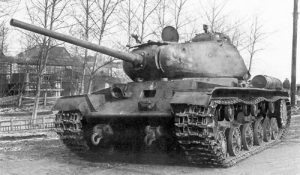 Whilst many self-propelled guns with higher caliber guns developed at this time (such as the SU-85) were being produced in large numbers, there was long standing work on replacing the aging KV-1. By 1943, there were 21 heavy tank designs that had been created, but they all almost faced cancellation from Stalin because of the scathing reports produced about the KV-1’s inadequate gun and poor mobility, which cost the Red Army dearly. The KV-1S made matters worse because it was a vastly substandard tank that tried to balance two opposing traits - armor and speed. Despite reports from experienced commanders such as General P.A. Romistrov, Stalin did not cancel all heavy tank production. This was thanks to lobbying from the NKTP (People’s Commissariat of the Tank Industry of the USSR), and the need to combat new German heavy and medium tanks, which was becoming more and more evident as the war progressed.

The need to hasten the deployment of heavy tanks led Kotin to divide his TsKB-2 bureau in two. The first team chose to improve the stopgap KV-1S, whereas the second team began work on the new KV-13 headed by N.V. Tseits. Tseits’ vehicle would later develop into the IS-85, a much better balance between speed and armor.

The original KV-85 design was very different to the one eventually chosen. This was the KV-85G - a slightly modified KV-1S with an 85 mm (3.35 in) S-53 gun jammed in a KV-1S cast turret. It appears that only one prototype was made and was deemed unsatisfactory. This is almost certainly due to the lack of space for the crew and gun. Fortunately, the IS-85 turret was available by this time, but the IS chassis was not. Due to long, technical delays in IS-85 production, along with urgent requests for more heavy tanks with an even heavier armament, a new tank was made by taking a further modified KV-1S chassis and sticking an IS-85 turret on top. At least two other prototype vehicles using different 85 mm experimental guns (including the D-5T and a modified ZiS-5 gun, now 85 mm instead of 76 mm/3 in) were put into comparative tests with the new KV-85 (with IS-85 turret). The KV-85G design had already been rejected because of a lack of internal turret space. The KV-85 with IS-85 turret was deemed the most suitable for production.

On August 8th, shortly after these trials, the KV-85 was accepted for service by the State Defense Committee, and Resolution 3891 led to 148 KV-85s being produced as a stopgap from September to December at Chelyabinsk. The fifth crew member (the radio operator) was no longer needed because of demands for larger ammunition racks, containing 70 rounds, as well as the size of the gun breech. 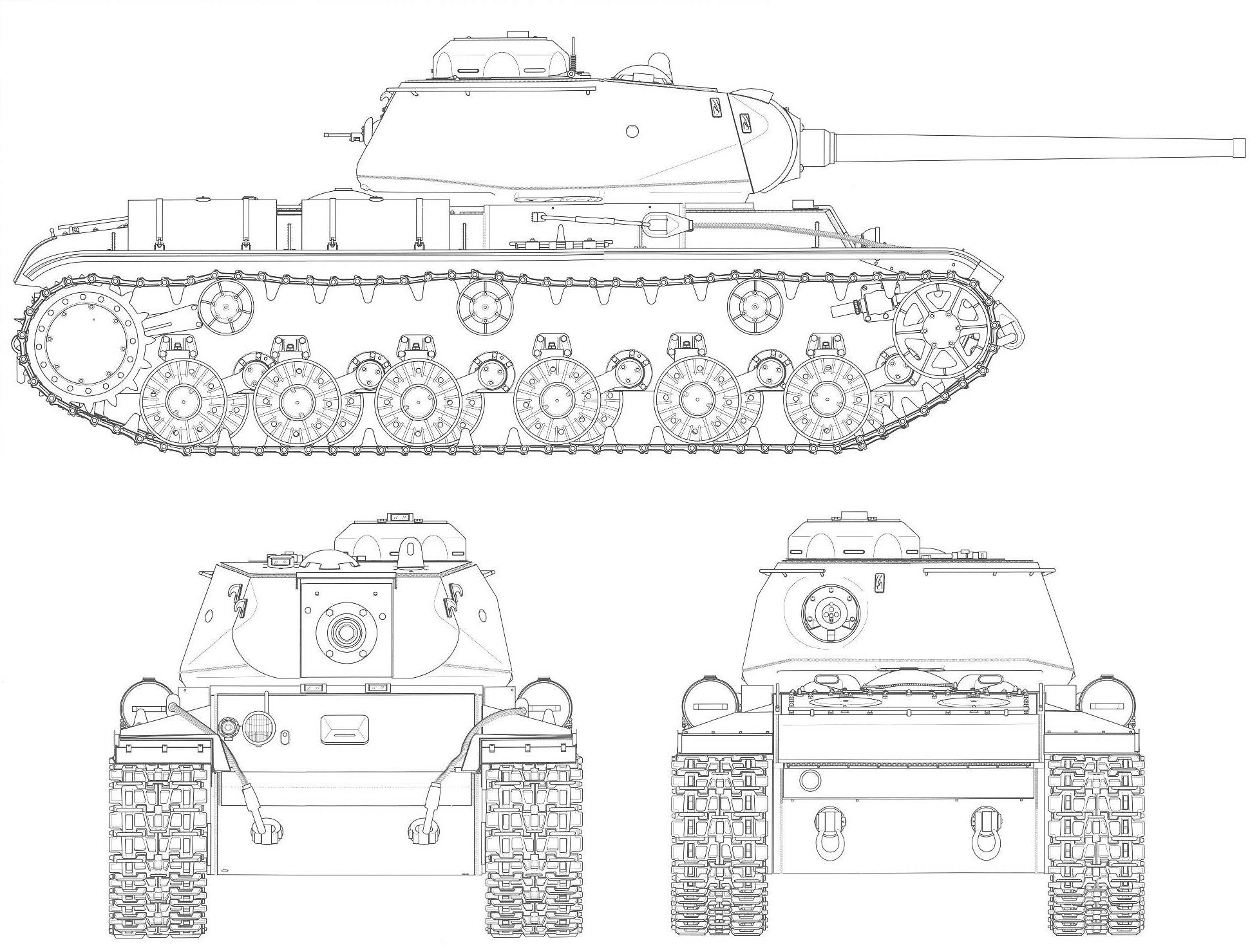 Technical drawing of a KV-85. 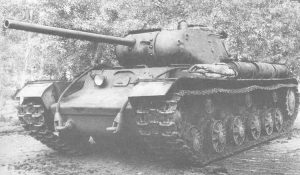 The KV-85G prototype. It is distinguishable as it has a hull DT visible and no enlarged commander's viewport, as seen on the IS-85 turret. 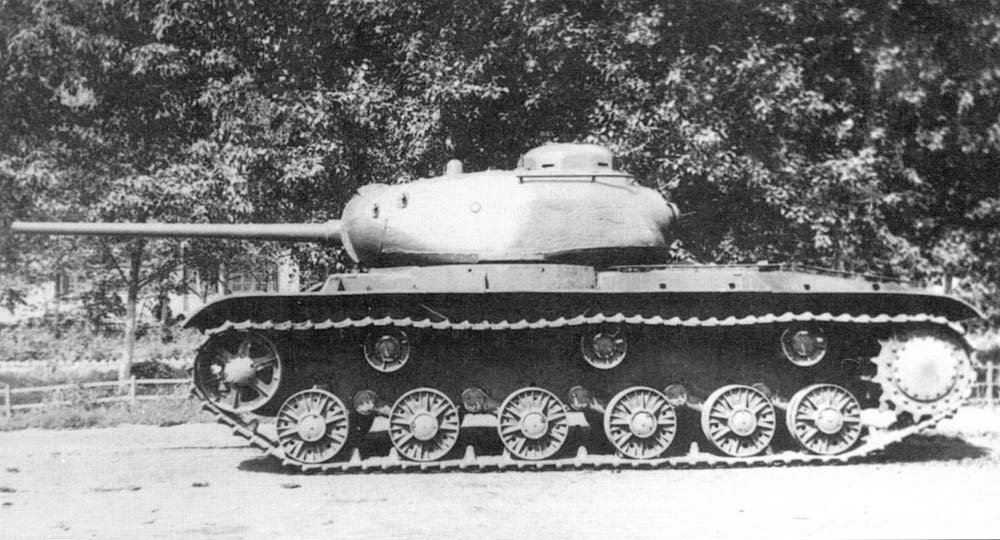 A sideview of the KV-85. Here, the shape of the KV-1S hull is clear, but the IS-85 turret is even more obvious with its unique rear DT mount and commander's viewport.

Combat of the few KV-85s was both limited and mixed. On paper, a KV tank with the infamous D-5T gun (as used on the SU-85 tank destroyer and to be used on the iconic T-34/85) sounds like a horrific opponent for the Wehrmacht, but this was not the reality of war. Whilst the larger gun was generally met well, the overall combat effectiveness of the tank was not, mostly due to the chassis. It was simply unreliable, the armor was still poor, and even despite some adjustments, it could not consistently withstand shells of a caliber of 75 mm (2.95 in) or greater. This is particularly important, as the KV-85 was used as a breakthrough tank, and the Wehrmacht was now fielding high caliber guns to counter the Red Army's previously near-invulnerable tanks. In one engagement in the Ukraine in November, 1943, the 34th Guards Heavy Regiment was repulsed with the loss of one third of its KV-85s by fire from Panzer IVs and Marder IIs. However, it could be argued that tactical factors influenced the level of losses faced by the Regiment and it is worth noting that a German counterattack was beaten off the next day with no Soviet casualties. 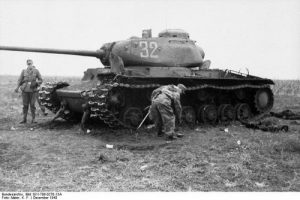 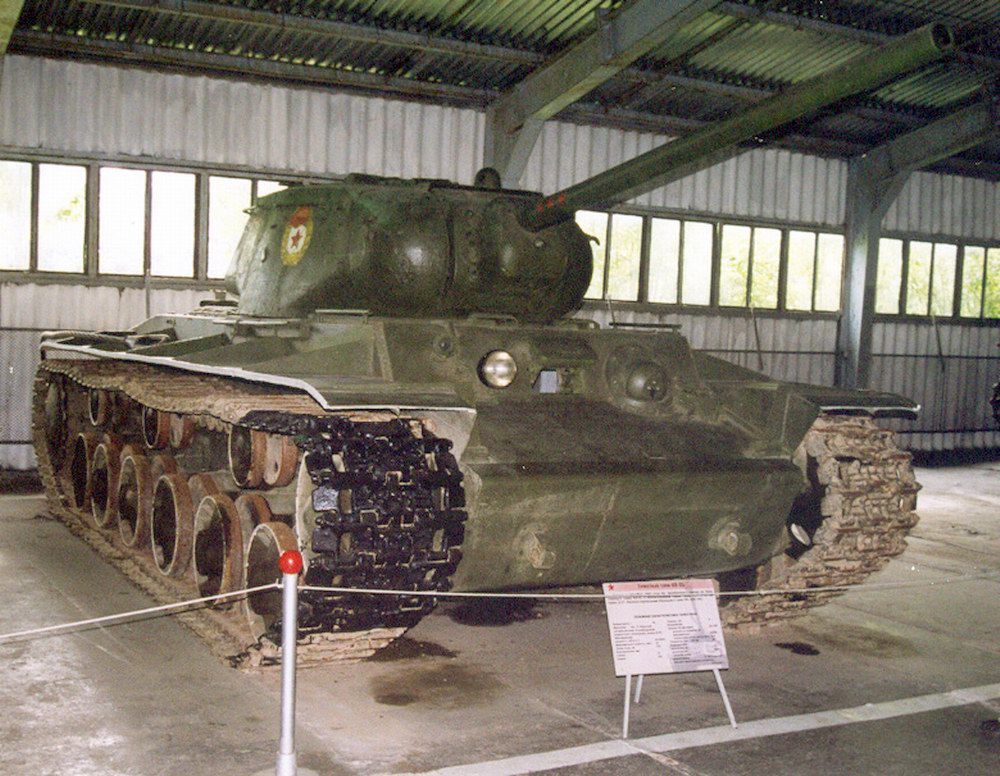 Another strong criticism about the KV-1 concerned its main armament, which was the same as the medium main tank of the Red Army, the T-34. But the KV-1 was more expensive and with far less mobility. A better gun could have effectively saved the KV-1, making something comparable to the last version of the Panzer IV or the Tiger. By 1943, Lieutenant-Colonel Kotin technical bureau was split in two, a part being affected to studying a new stopgap heavy tank based on the KV-1, waiting for its replacement to come. The team naturally chose the improved KV-1S, but increased the armor protection in vital parts to 110 mm (4.3 in), and widened slightly the hull to accommodate a larger turret and gun, the 85 mm (3.35 in) D-5T which was also chosen to equip the IS-85 (forerunner of the famous IS-1). Due to this interim position, the KV-85 was only produced in limited quantity by the beginning of 1943. 143 units of this ultimate version will be delivered until the production stopped for good. The KV-85 had the same engine as its predecessors and was 46 tons strong, with thickness of 60 mm/2.36 in (hull), 75 mm/2.95 in (frontal glacis), to 100-110 mm/3.94-4.33 in (turret front, sides and rear). Max speed was around 40 km/h (29 mph) and range 250 km (155 mi). The DT-5 gun was a shorter derivative of the original 85 mm (3.35 in) AA gun (792 m/s or 2,598 ft/s muzzle velocity).

KV-85, unknown unit of the Guards, Eastern Prussia, June 1944. This transition model between the KV-1 and IS-1 was only produced to a number of 143 machines.

KV-85, unknown unit of the Guards, Eastern Prussia, June 1944. This transition model between the KV-1 and IS-1 was only produced to a number of 143 machines.