Large numbers of Soviet vehicles were captured by the Wehrmacht during the war, and were pressed back into service, generally in lesser roles such as artillery observation, munitions transport, and anti-partisan duties. Some even had conversions done to them – the most well-known being new commander’s cupolas, or in the case of one famous KV-1 in 1943, a new KwK 40 L/43 gun was added (22nd Panzer Division, 204th Panzer Regiment). However, this BA-10M has been given more than just a new cupola – it has a Panzer II firing system and mantlet added to the turret.

The designation “Beutespähwagen BA-10M mit 2 cm Kampfwagenkanone 30 L/55” is an unofficial name for the vehicle created by the TE team, but sums it up rather simply (from hereon, it will be referred to as “BA-10/Panzer II”, for simplicity). According to several known photos, it appears that the mantlet of a Panzer II was added to a BA-10M turret (that has had its original mantlet removed). The Panzer II mantlet also appears to have not been simply sliced off the original Panzer II turret, either. It appears as though the turret has had its sides cut off, making it look flat at either side, in order to make it narrow enough to fit the BA-10 turret.
It seems as though the vehicle was converted by expert engineers, with a lot of attention to detail, in what must have been a well-equipped workshop. Further modifications include: a new set of headlamps and a new fender/bumper. The radio above the hull DT has been removed (its original mount can still be seen), and in the center of the roof, a new, rectangular periscope has apparently been added, seen most clearly on the second photograph. On the left of the hull DT, it seems that a new, wider vision slit has been added, most likely because the original vision slit was deemed too small for purpose.

As with many field conversions, further details other than those seen in the photo are unknown. The vehicle belonged to the NSKK (Nationalist Socialist Motor Corps), as proven by writing on the side, which would suggest that it was likely a munitions carrier, or perhaps a convoy protection vehicle. The winged dagger on the vehicle’s engine hatches has not yet been identified, but is speculated to belong to a foreign SS division.
The soldiers, indeed, appear to be SS, perhaps from a foreign volunteer unit, and it appears as though the vehicle is traveling through a thick forest / shrubbery, meaning that the vehicle is more likely to be an anti-partisan / security vehicle. The presence of the dog, too, as seen in the third photo, would suggest that it was an anti-partisan unit, as it could have been used to track partisans.
The vehicle was possibly made during 1943 at FAMO’s Ursus Factory in Warsaw. This is because many Panzer II turrets would have been discarded during the production of the 676 Wespe SPGs at that factory. It is possible that a turret from a Panzer II (that was converted into a Wespe) was cannibalized for the conversion.
It is unclear why the original 45mm gun was removed. It is possible that the original BA-10 mantlet or gun was frontally damaged, there was insufficient 45mm munitions to have the gun operational, or perhaps the 2 cm autocannon was preferred for light convoy protection / anti-partisan duties because of its superior rate of fire.

The vehicle has caused some debate among the Tanks Encyclopedia team as to whether the photos are photoshopped or not. It has been suggested that the vehicle appears to have characteristics of both the BA-10M and BA-6M (BA-10 original prototype). The hull DT does not appear to bulge out slightly beyond the driver’s slit like the BA-10M. A flat front plate was seen on all previous Soviet heavy armored cars, but was modified in the BA-10M to bulge out. The vehicle is unlikely to be a BA-3 or BA-6 because it does not have as many rivets on it, and, apart from which, the engine hatches have internal hinges, which is characteristic of the BA-6M and BA-10M. It does appear as though the bulge can, however, be seen, and poor lighting is the explanation for this illusion.
Another discrepancy is seen with the roof shape – the second and third photos are best for seeing this. The left side (facing) appears to be curved, like the BA-10M, but the right side appears to be flat, like a BA-6M. However, on the third photo, the right side is shown to be curved. Comparing the first and third photos shows that the commander is the same person, making it unlikely that there were two of these conversions. The BA-6M was also a prototype, and did not see mass production, so it is highly unlikely that this is an explanation. In the second photo, above the hull DT position, is a large, inexplicable bulge on the roof. It has been suggested that this is possibly a hatch, but the shape seems dubious.
The retort to those claims is that these discrepancies can be explained by a trick of the light, the low quality of the photos, and the camera angle. There are several photos, two of which appear to be taken almost at the same time, which means that it is highly unlikely to have been photoshopped, as it would be a very difficult job. The fact that the same commander can be seen in two different photos, and the sheer attention to detail with the commander’s hands on the turret’s hatch (1st and 2nd photo), would make this a very professional job, if fake. 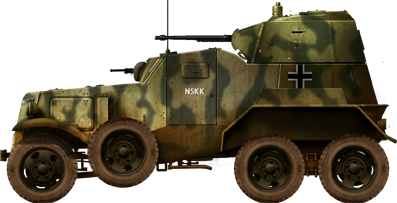 Our reconstitution: It seems seems as though photos of this vehicle show that it was camouflaged, although we have no clue of the colors. However, it is also possible that an illusion of camouflage is also given from the sun casting shadows of leaves and branches onto the vehicle. It also most likely had a German radio, and the original whip antenna was removed. 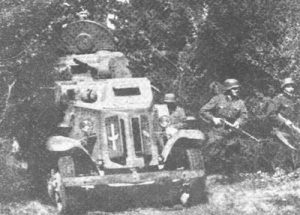 The BA-10/Panzer II. The commander can be seen at the top with his hands on the hatch. A new fender/bumper and headlamps are apparent. The DT bulge appears to be visible in this photo, hence the shadow on the right of the DT mount. It is likely that this was an anti-partisan vehicle in Poland, 1943. 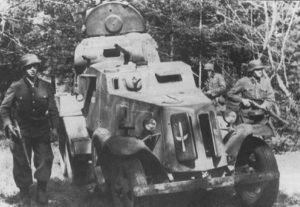 Seemingly taken shortly after the above photo, it reveals that the Panzer II turret has been made narrower (this the sides appear flat as opposed to sloped). On the left of the hull DT appears to be a new and wider vision slit. Above, the original periscope radio has been removed, and it appears as though a new, rectangular one has been added in a newly molded mount in the center of the roof. There is also an inexplicable bulge behind the original radio mount. The right side of the roof also appears flat as opposed to curved. The soldiers also appear to be the same as above, as their faces are the same. Their uniforms indicate that they are SS soldiers, likely a foreign volunteer unit. 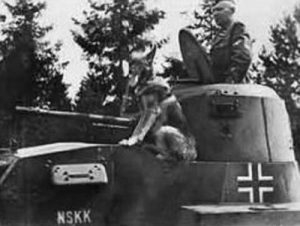 A sideview of the BA-10/Panzer II. Unfortunately, the dog is directly covering the joint between the Panzer II mantlet and BA-10 turret. This photo reveals that this vehicle was with the NSKK. The commander appears to be the same person as in the above photo. The roof is curved, indicating that the vehicle is a BA-10M.