There were two main types of self-propelled guns in the German Army during WW2. One was fitted with an anti-tank gun and the other with an artillery howitzer, like the 10.5cm leFH 18 (Sf.) auf Geschutzwagen 39H(f) self-propelled gun. The vehicle fitted with the artillery howitzer was called a ‘Geschuetzwagen’, which is literally translated as a ‘gun vehicle’. The letters ‘SF’ stand for ‘Selbstfahrlafette’ – self-propelled carriage. The letter (f) indicates that the chassis was of French origin. 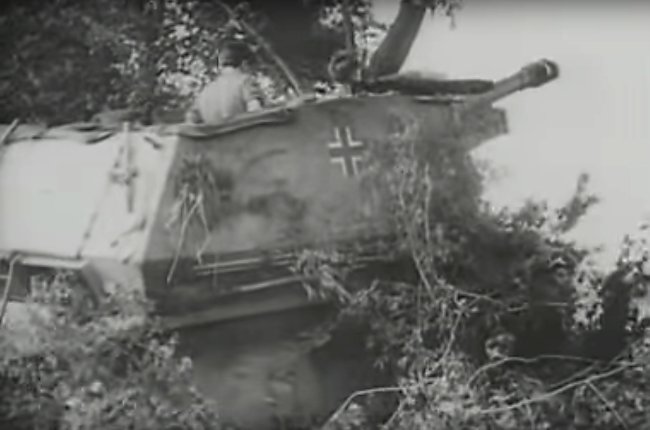 10,5cm leFH 16 (Sf.) auf Geschützwagen 39H(f) in plain sand livery. Sturmgeschuetz-Abteilung 200, 21st Panzerdivision, Normandy, summer 1944.
Improvised self-propelled artillery guns were developed to enable fast moving attacks to have artillery support that could keep up with the speed of advancing Panzer Divisions. They could use direct fire mode at targets they could see or, more commonly, use indirect fire at targets plotted on a map.
They were not designed to be in the front line or engage in combat with tanks. They were motorized artillery guns that could fire high explosive HE shells over the heads of friendly troops. Most targets would have been given to the crew as map grid references by forward observation officers or infantry units under attack.
Quite often, the gun crews could not see where their shells landed, as the target was so far away. They would have to rely on the forward observer to tell them if adjustments had to be made.
The open-topped back design of these self-propelled guns had a number of advantages. The elevated commanders position when standing in the crew compartment, behind the protective armored shield, meant that he had a good view on all sides. If there was the threat of enemy small arms fire, then the crew could use a twin lens range finder telescope that could peak over the top of the armored casement. 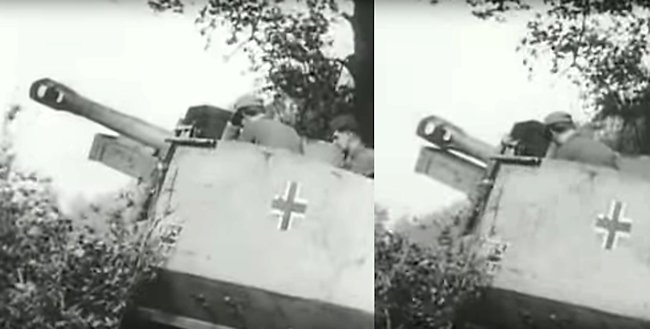 This pair of photographs shows the 10.5cm leFH 16 (Sf.) auf Geschutzwagen 39H(f) gun recoil after firing a shell
There was enough room for the crew to be transported towards the battlefield whilst protected from small arms fire and shell shrapnel. The vehicle had good mobility and could follow the infantry almost anywhere. The gun was quicker to get ready for action and fire on targets than towed artillery guns.
They were cheaper and faster to build than a new vehicle. They used the chassis of an obsolete captured French tank and an existing artillery howitzer.
Putting the 10.5cm leFH 18 howitzer on top of the Hotchkiss tank chassis was a more efficient use of manpower from the traditional form of German artillery battery transportation. Even in WW2, horse power was still widely used although tracked vehicles were also used when available.
Each field gun would require a six-horse team to pull the gun and limber. The ammunition, supplies and kit would be kept in the limber, which was a very large box on a pair of wheels with seats on the top. Three men would ride on the left hand horse of each pair to control them. The remaining six men of the gun crew would ride on top of the limber. Only a relative few were towed by the 3 ton halftracks.

At least twenty four 10,5 cm LeFH 16 and 10,5 cm leFH 18 (Sf.) auf Geschutzwagen 39H(f) self-propelled guns went into action in Normandy in June 1944. They were part of the German Army assault gun battalion Sturmgeschuetz-Abteilung 200, of the 21.Panzer-Division. Inspection by Rommel
The last ones were knocked out when they were caught in the Falaise Pocket and subjected to intense bombing, shelling and gun fire in August 1944. There is only one original surviving example left and that is a 10,5 cm LeFH 18 (Sf.) auf Geschutzwagen 39H(f) at the French Tank Museum, Musée des Blindés, Saumur, France.

The 10.5 cm leFH 18 gun was a German light howitzer used in World War II. The abbreviation leFH stands for the German words ‘leichte FeldHaubitze’ which, translated, means light field howitzer. It was fitted with a ‘Mundungbremse’ muzzle brake to allow longer range charges to be fired and reduce the amount of recoil on the gun. This increased the operational life of the gun barrel.
The 105mm high explosive HE shell weighed 14.81 kg (32.7lb). The armour piercing shell weighed 14.25 kg (31.4lb). It had a muzzle velocity of 470 m/s (1,542 ft/s) and a maximum firing range of 10,675 m (11,675 yds). With a good gun crew, it had a rate of fire between 4-6 rounds per minute.
The 10.5cm leichte Feld Haubitze 18 gun was not very useful in the direct-fire mode against enemy armored vehicles. It could only penetrate 52 mm (2 in) of armor plate at a very short range of 500 meters.
The high explosive shell was in two pieces. It was a ‘separate loading’ or two part round. First, the projectile would be loaded and then the cartridge propellant case.
The 10.5 cm leFH 16 gun was a German light howitzer used in World War I. It had a shorter range than the WW2 10.5 cm leFH 18 gun. Its maximum firing range was 9,225m (10,089 yds). As the same caliber weapon was used, it could fire the same ammunition. Its muzzle velocity was 395 m/s (1,300 ft/s).
There were a few disadvantages of an open topped vehicle. The crew was exposed to the elements and were also at risk of injury from enemy thrown hand grenades, mortars and shrapnel from air burst enemy shells. Rain covers were produced. They covered both the crew compartment and the gun. The canvas was attached to the upper protective armour using the small D shaped rings welded to the upper part of the structure.
Because the French Hotchkiss H39 tank chassis was small, there was limited space for the storage of ammunition. Only thirty six 10.5 cm HE two part shells could be carried. The propellant charges were kept on the left of the vehicle whilst the projectile shells were stored on the right. Sturmgeschuetz-Abteilung 200 10.5cm leFH 18 (Sf.) auf Geschutzwagen 39H(f) self-propelled gun
Shells were carried in the crew compartment via the rear of the vehicle. There were two large hinged armoured doors with a small protruding metal step ladder underneath them at the back.
When the ammunition supply lorries reached each battery they would unload two different types of packing boxes. The propellant charges, that looked like giant tin cans, were transported in protective wooden hinged boxes. The front projectile part of the shell was wrapped in its own individual open wooden crate
A MG 34 machine gun was attached to top right side of the armor casement, on a swivel mount. Spare ammunition 50 round drums were stored underneath the mount. It fired 7.96 mm (0.31 in) bullets. 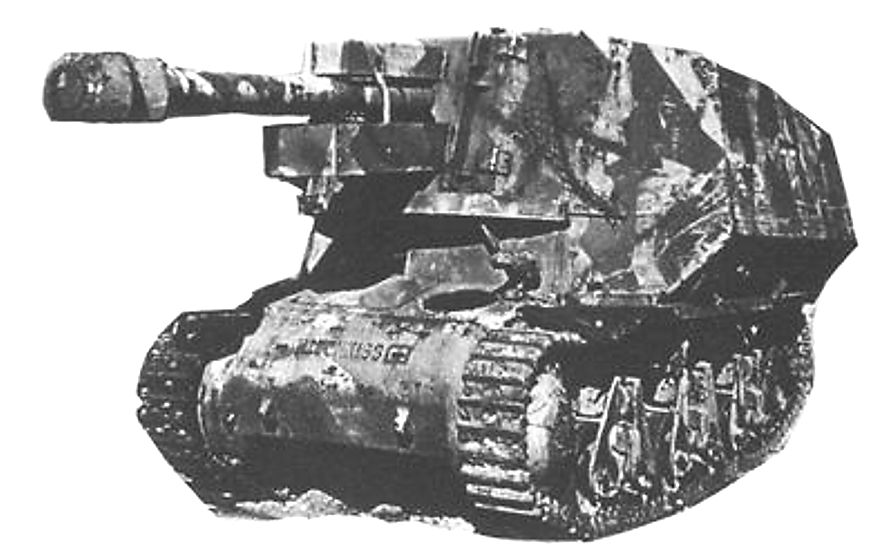 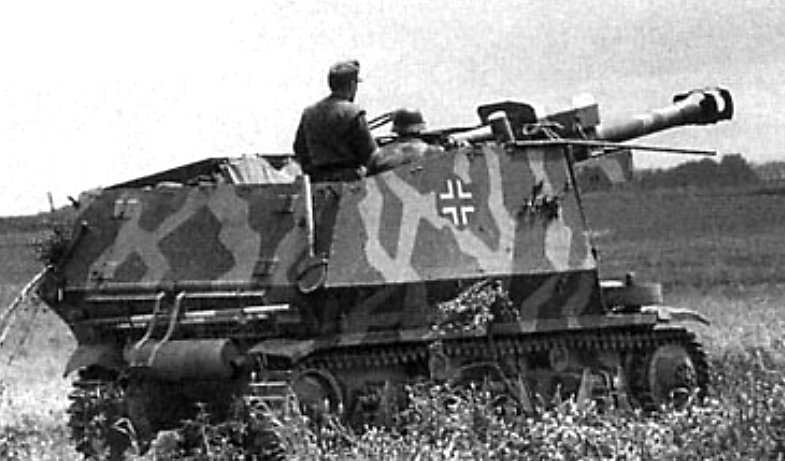 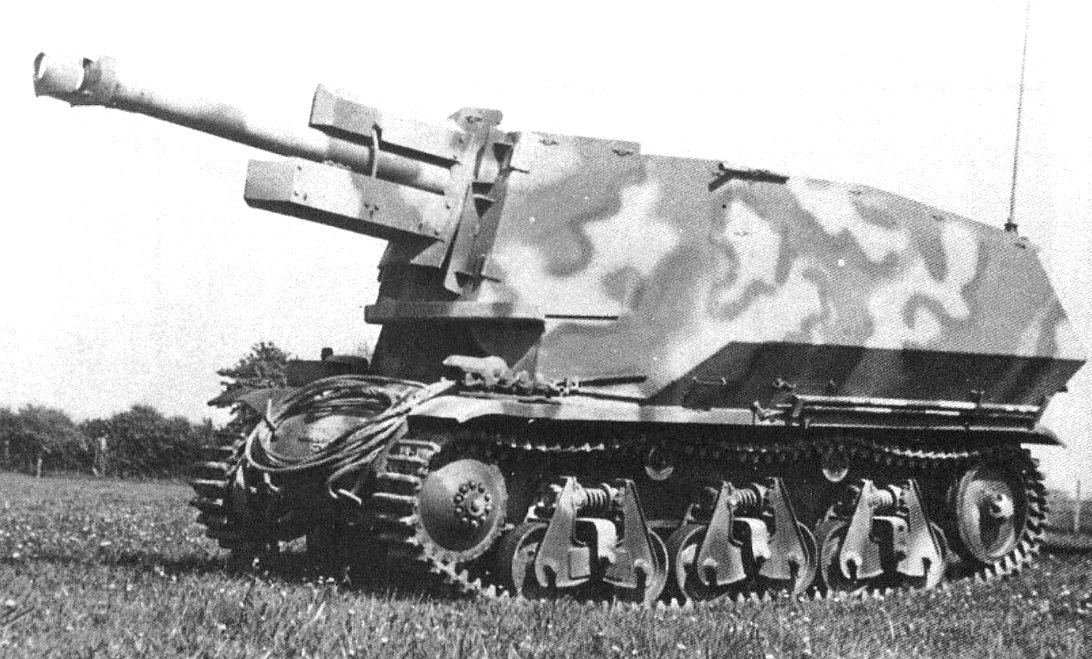 In bad weather a rain cover could be used to cover the 10.5cm leFH 18 (Sf.) auf Geschutzwagen 39H(f) self-propelled gun Close up of the 10.5 cm gun’s Schutzschild (splinter shield) Thank you for the appreciation Charles!

There is what looks like a french half track mounting a 75mm pak 40? In this video but i cant find refernce to this vehicle in the encyclopedia. Anyone know what it is?

“The 10.5cm leichte Feld Haubitze 18 gun was not very useful in the direct-fire mode against enemy armored vehicles. It could only penetrate 52 mm (2 in) of armor plate at a very short range of 500 meters.”

These data would have to apply to the leFH 16. The penetrating power of the leFH 18 was higher. (“Feldhaubitze”)