The German 10.5cm leFH 18/6 auf Waffenträger Geschützwagen III/IV ‘Heuschrecke IVb’ ‘Grasshopper’ was designated a weapon carrier (waffenträger) and not a self-propelled artillery gun. The reason for this is that the turret could be removed from the top of the modified Panzer IV tank chassis by a block and tackle rig attached to a movable metal frame.
The idea was that the gun crew could keep up with the armoured Panzer Divisions. When needed to fire as an artillery battery, to give long range support firing high explosive shells over the heads of the German infantry and tank crews, The gun would be removed and placed on the ground where it could be fired like a normal artillery gun. 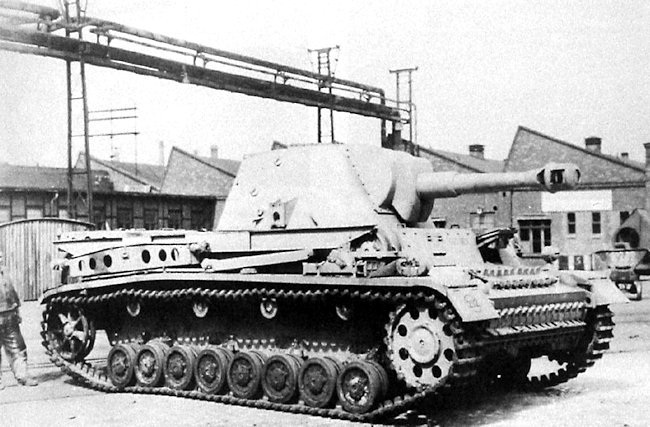 The 10.5cm leFH 18/6 auf Waffenträger Geschützwagen III/IV ‘Heuschrecke IVb’ ‘Grasshopper’ artillery SPG prototype at the Krupp-Grusonwerks factory
The heavy lifting metal framework could be swung upright into position by a hydraulic system or a manual back up system. When not needed it was lowered down and stored on top of the upper track guards on both sides of the tank chassis.
The vehicle could carry 87 high explosive shells. If more were needed the turret could be removed and placed on a gun carriage and towed behind the tank chassis. This allowed for more ammunition to be carried onto the battlefield. The modified Panzer IV tank chassis became a turretless armoured ammunition carrier. This configuration would have only worked in gentle undulating countryside or on roads. The gun carriage wheels and frame were carried on the tank chassis at the rear.
The 10.5cm howitzer could also be fired from on top of the tank chassis. There was no top to the turret. There were a few disadvantages of an open topped vehicle. The crew was exposed to the elements and were also at risk of injury from enemy thrown hand grenades, mortars and shrapnel from air burst enemy shells. A canvas tarpaulin rain cover was produced. 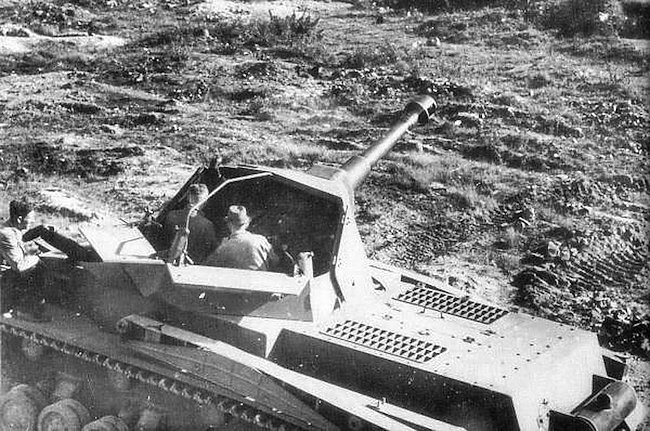 The side and rear of the open topped turret could be folded down to give more room for the crew to work the 10.5cm LeFH 18 gun

It was not a movable pillbox

Some books have argued that the reason for removing the turret was because it could be used as an armoured pillbox. This was not its function. It was an artillery gun that was designed to operate behind the front line. It was not an anti-tank gun. The protective armour that surrounded the gun was not of a thickness that would have stopped armour piercing tank shells. It was only designed to protect the gun crew from small arms fire and high explosive shell and mortor round shrapnel fragments.

The German armament factory of Alkett and Rheinmetall-Borsig based near Berlin had come up with a similar prototype design called the 10.5 cm leFH 18/40/2 auf Geschützwagen III/IV. It did not have the lifting gear on the side of the vehicle but the turret was removable just like the Krupp-Gruson design.
It used the standard Panzer IV tank chassis and had slightly better performance than the Krupp-Gruson’s Heuschrecke IVb Grasshopper. The Alket Rheinmetall-Borsig model was completed in March 1944.

In May 1943 German Army weapon designers decided to build a prototype Heuschrecke IVb. It would built using a Hummel SPG chassis and a 10.5cm LeFH 18/l light field howitzer in a removable turret.
In June 1943 the Krupp-Grusonwerk factory started work on building this new armored fighting vehicle using a new Hummel chassis number 320148. Other sources state that three prototypes were built, with serial numbers 582501, 582502 and 582503.
The Hummel self-propelled artillery gun had powerful 15cm sFH 18 L/30 heavy field howitzer mounted on a specially designed Alkett/Rheinmetall-Borsig lengthened German tank chassis called the Geschützwagen III/IV. It was also referred to as the IVb.
These prototypes were referred to as the Heuschrecke 10 or Heuschrecke IVb. The word Heuschrecke means Grasshopper. It was quite appropriate. The long folded metal lifting equipment kept on top of each track mud guard looked like a grasshoppers insect legs. The number 10 refers to the size of the gun, the 10.5cm. The number IVb refers to the modified Panzer III/IV tank chassis
Components were adopted from both the Panzer III and Panzer IV tank chassis. The more robust final drive wheels, front drive wheels and steering units plus the Zahnradfabrik SSG 77 transmission gearbox were adopted from the Panzer III Ausf.J.
The Maybach HL 120 TRM engine with its cooling system, the suspension, and idler with track tension adjustment were adopted from the Panzer IV. The engine was moved from the rear of the tank to the center of the vehicle to make room for the gun and the armored fighting compartment at the back of the SPG.
The Geschützwagen III/IV tank chassis did not have a hull mounted machine gun. Crews would be issued with a single MG34 or MG42 machine gun, carried inside the fighting compartment, for self-defence.
The Krupp-Gruson designers envisioned that the Heuschrecke IVb would start to replace the 10.5cm leFH 18 auf Gahrgestell Panzerkampfwagen II Wespe self-propelled artillery gun in May 1944.
The tank engineers at the Krupp-Grusonwerk armaments factory made changes to the superstructure and chassis to enable the Heuschrecke turret to be fitted and the installation of the hydraulic mechanism needed to dismount the turret.
The Hummel was powered by a Maybach HL 120 TRM engine that was fitted in the middle of the vehicle to allow more room for the gun crew to work the gun at the back of the vehicle. This was changed for the 10.5cm leFH 18/6 auf Waffenträger Geschützwagen III/IV ‘Heuschrecke IVb’ prototype. The engine and the radiators were moved to the rear of the chassis.
The Heuschrecke IVb prototype turret was armed with the 10.5cm leFH 18/1 L/28 light field howitzer. The production models, however, were to have the newer, more powerful 10.5cm leFH 43 L/28. 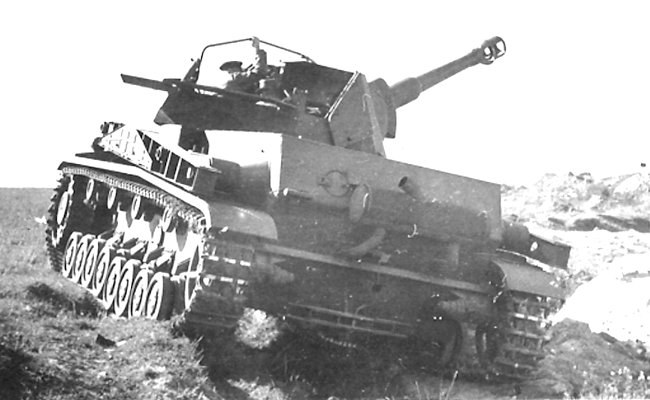 The 10.5cm leFH 18/6 auf Waffentrager IVb SPG under going live firing trials. Notice the slightly different configuration of the early hydraulically operated arms for dismounting the turret compared to later photographs. The gun carriage wheels have not been fixed to the rear of the vehicle for these trials. The side and rear turret panels have been folded down to give the crew more room to work the gun.

The German Army Weapons Agency (Heereswaffenamt) sent weapon testing inspectors from the Gliederung Waffenamt Prüfwesen (Wa Prüf 4) artillery section to examine the new artillery SPG. They submitted a report following their inspection visit on the 28th September 1943.
On the positive side they noted it used mature tested parts. It could be traversed through 360 degrees and fired at high elevations when dismounted. The design worked and had adequate space for stowage of equipment and ammunition. It could carry 87 10.5cm shells.
On the negative side they concluded the 10.5cm leFH 18/6 auf Waffenträger Geschützwagen III/IV ‘Heuschrecke IVb’ would be expensive to produce and the dismounted turret wasn’t mobile.
The first trials happened on 11th October 1943 at Hillersleben. The hydraulic arms were used to dismount the turret. It was found to be too heavy. A lighter redesigned turret was manufactured and ready for testing by the end of December 1943.
At the end of January 1943, to complement the hydraulic turret dismounting system, the design team at Krupp started work on a backup hand powered system in case of problems with the hydraulics on the battlefield.
On the 28th March 1944 the Wa Pruef 4 artillery weapon testing inspectors were present at a second demonstration of the modified 10.5cm leFH 18/6 auf Waffenträger Geschützwagen III/IV ‘Heuschrecke IVb’.
Their recommendations after that visit were that a hand-operated crane, for dismounting the turret, be fabricated. Wheels were to be added to the dismounted turret frame, and installing a standard gun carriage and recoil management recuperator cylinder from the le.F.H. 18 gun.
On the 31st May 1944 the newly modified 10.5cm leFH 18/6 auf Waffenträger Geschützwagen III/IV ‘Heuschrecke IVb’, with a parallelogram hand-operated crane and wheels for the dismounted carriage, were demonstrated to the Wa Pruef 4 artillery weapon testing inspectors.
This time their report conclusion stopped any further development and design work on this project. They concluded that the 3.8 tonne dismounted turret was unusable on the battlefield. The 10.5cm leFH 18/6 auf Waffenträger Geschützwagen III/IV ‘Heuschrecke IVb’ ‘Grasshopper’ never entered mass production.
There was no dramatic advantage to building this weapon over the 15cm Hummel, 10.5cm Wespe or 15cm Grille artillery self-propelled guns that were already in production. These vehicles were less complicated to produce and operate.

The 10.5 cm leFH 18 gun was a German light howitzer used in World War II. The abbreviation leFH stands for the German words ‘leichte FeldHaubitze’ which, translated, means light field howitzer. It was fitted with a ‘Mundungbremse’ muzzle brake to allow longer range charges to be fired and reduce the amount of recoil on the gun. This increased the operational life of the gun barrel.
The 105mm high explosive HE shell weighed 14.81 kg (32.7lb). The armour piercing shell weighed 14.25 kg (31.4lb). It had a muzzle velocity of 470 m/s (1,542 ft/s) and a maximum firing range of 10,675 m (11,675 yds). With a good gun crew, it had a rate of fire between 4-6 rounds per minute.
The 10.5cm leichte Feld Haubitze 18 gun was not very useful in the direct-fire mode against enemy armored vehicles. It could only penetrate 52 mm (2 in) of armor plate at a very short range of 500 meters.
The high explosive shell was in two pieces. It was a ‘separate loading’ or two part round. First, the projectile would be loaded and then the cartridge propellant case.

When the American Army occupied Germany at the end of the war they found a surviving 10.5cm le.F.H.18/1 L/28 auf Waffenträger IVb prototype. It was shipped back to the US Army Ordnance Corps proving grounds at Aberdeen, Maryland for testing and evaluation. It was transferred to Fort Still in 2012 and the Grasshopper 10 was restored by the Fort Sill Directorate of Logistics paint shop. 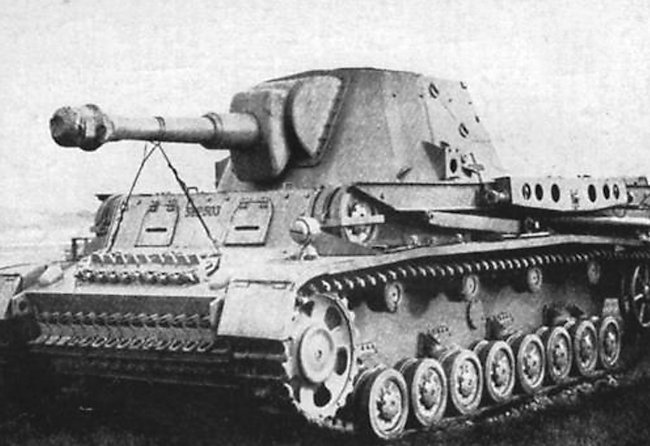 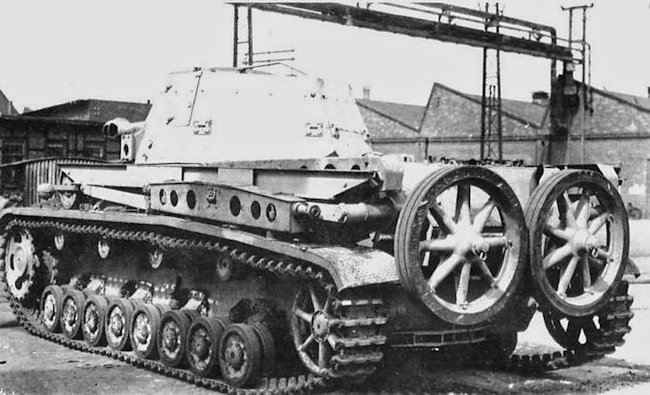 The two large wheels at the back of the 10.5cm leFH 18/6 auf Waffenträger Geschützwagen III/IV ‘Heuschrecke IVb’ ‘Grasshopper’ and the metal strut with the holes it on top of the track mud guards were used to construct a gun carriage. 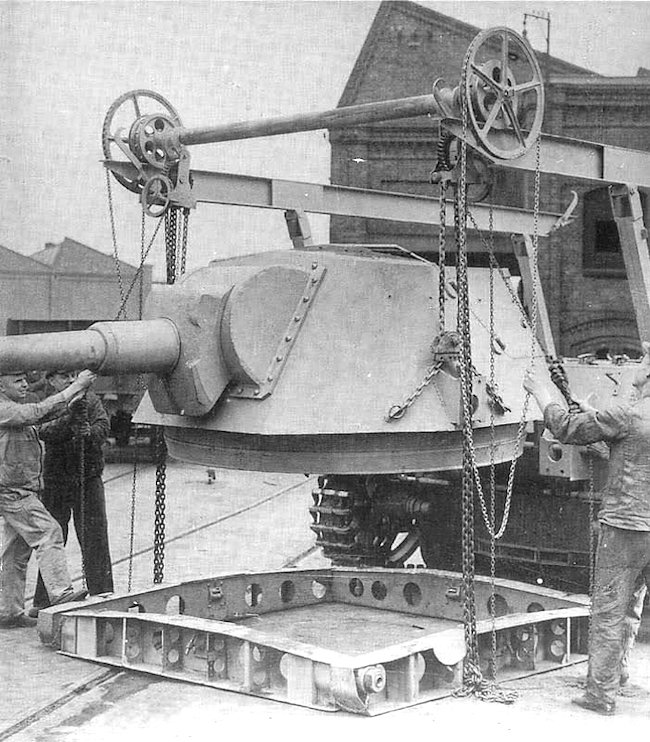 Gun crews would erect the load carrying gibbet on the back of the vehicle chassis then remove the turret. It was placed onto a the gun carriage frame on the floor. Once it was locked into position it would be raised again so the gun carriage wheels could be fitted. The gun could then be towed. 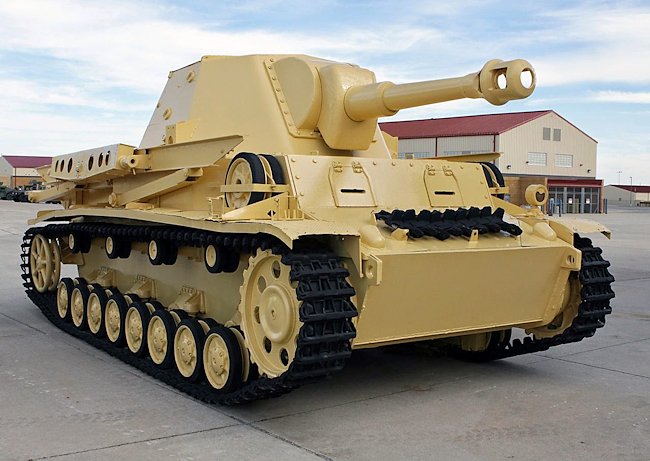 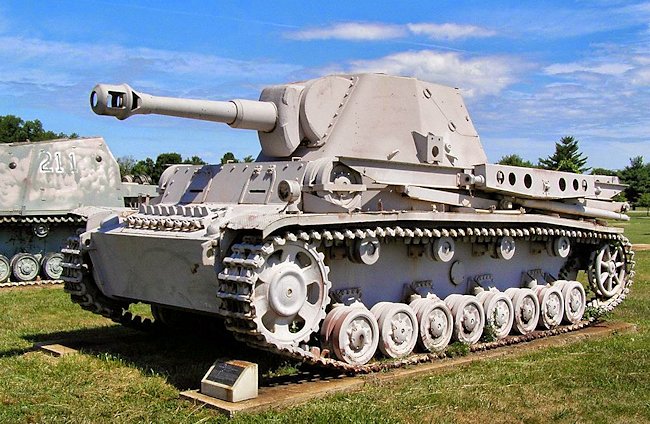 Before it was recently restored the 10.5cm leFH 18/6 auf Waffenträger Geschützwagen III/IV ‘Heuschrecke IVb’ ‘Grasshopper’ was kept out in the open at the US Army Ordnance Corps proving grounds at Aberdeen, Maryland before being moved to Fort Sill. Close up view of the 10.5cm leFH 18/6 auf Waffenträger Geschützwagen III/IV Heuschrecke IVb Grasshopper turret whilst it was being restored at Fort Sill. (Photo: Jon Bernstein)