Following the success of the Type 2 Ka-Mi, the Imperial Japanese Navy began development of a larger, stronger replacement. This was the Special Type 3 Launch Ka-Chi (特三式内火艇 カチ Toku-san-shiki uchibitei Ka-Chi), an amphibious medium tank, based on the chassis of the Type 1 Chi-He. 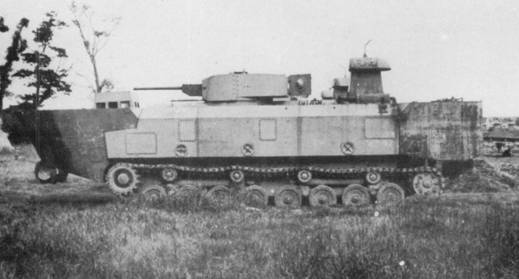 The Imperial Japanese Navy (IJN) became very fond of the Type 2 Ka-Mi, and were determined that a larger version was needed, with better offensive and defensive capabilities. This would have made it more suited to the amphibious warfare that went hand in hand with the island-hopping nature of the War in the Pacific. In 1943, the Type 3 Ka-Chi prototype was completed, with the vehicle being approved for construction not long after. The vehicle then entered service later that year. 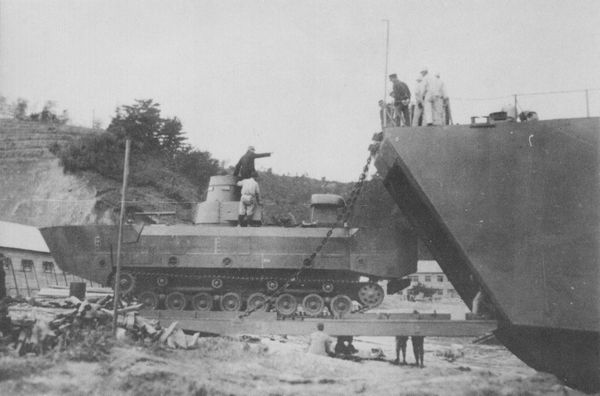 The Type 1 Chi-He, at the time Imperial Japan’s newest medium tank, was chosen as the foundation chassis for the Ka-Chi. The Hara or “Bell crank” suspension was elongated with 2 additional road wheels and return rollers. The hull was large and box-like with flat sides. It was of welded construction and waterproofed with rubber seals and gaskets. The sides tapered in where the additional pontoons were mounted. These pontoons were hollow and made of sheet metal. A large curved pontoon made up the vehicle’s “bow”. This was composed of two parts and would split down the center for mounting/dismounting. A smaller pontoon attached at the rear to form the vehicle’s “stern”. At the base of this section, there were 2 rudders. 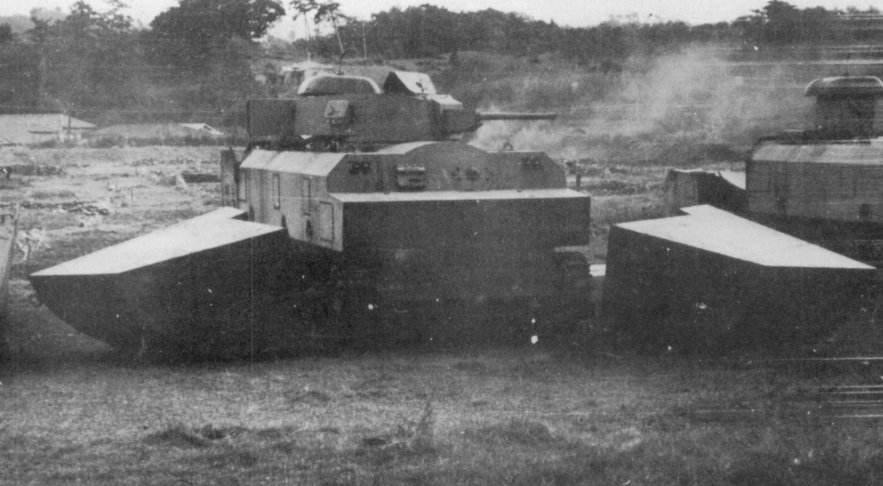 The Ka-Chi with the bow pontoon split into its 2 component parts
These pontoons were jettisoned from the inside of the tank, once it had made landfall. Many Ka-Mi crews, however, kept the pontoons attached, however, as it granted a slight improvement in armor protection. Though this would have had minimal effect, it is a practice that would likely have carried on with the Ka-Chi. Propulsion in the water was provided by twin-screws with steering being achieved with 2 more. These were powered directly by the tank’s Mitsubishi Type 100 air-cooled V-12 diesel engine. The Type 3 Ka-Chi had a distinctive large snorkel behind the turret. This delivered air to the Mitsubishi engine, and at the same time kept water out of the engine compartment.
The armament of the Ka-Chi was standard to the newer Japanese tanks of this era. The main armament consisted of the Type 1 47 mm tank gun, This was the same 47 mm gun used on the army’s Type 97 Chi-Ha Shinhoto, and of course, the Type 1 Chi-He. Secondary armament was a coaxial Type 97 heavy tank machine gun. These weapons were mounted in a modified version of the turret found on the Chi-Ha Shinhoto. It had a large conical cupola built over the standard one, to avoid water entering the crew compartment. The tank also had a bow machine gun positioned on the left of the driver.
The vehicle required a crew of seven, one of whom served as on-board mechanic, as with the Ka-Mi. His exact positition inside the vehicle is unkown.

Illustration of the Type 3 Ka-Chi by David Bocquelet

A feature of this vehicle was the ability to be transported via submarine, even when the submarine was submerged. Imperial Japanese Navy submarines, such as the Type Cs, were modified to carry the vehicles. As such, the vehicles had specially constructed hulls to deal with high-pressure found in the depths of the Pacific Ocean. The rear hull of the Ka-Chi was made up of a single convex plate, riveted to the main structure. 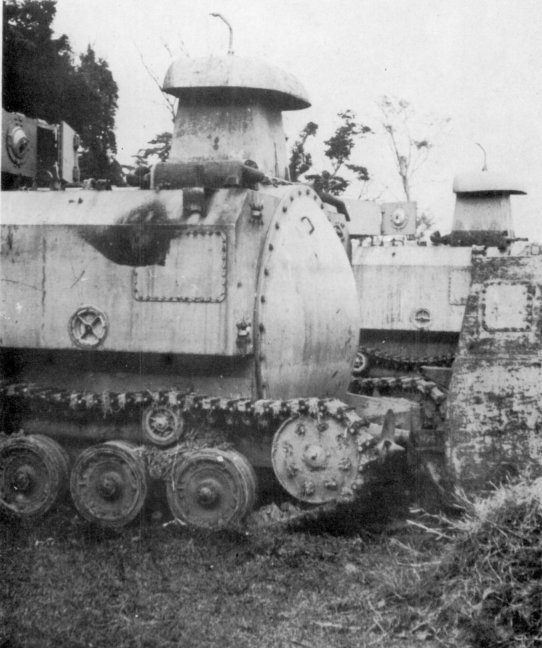 The convex plate on the rear of the tank.
This tactic was a covert way of deploying reinforcements to the small islands of the Pacific during daylight hours. While larger forces would make land under cover of darkness, submarine drop off was a discrete way of reinforcing or dropping off crucial supplies.

The production, however, was extremely limited with only 19 Type 3 Ka-Chis built between 1943 and 1945. The reason being that, as a Naval project, the vehicle fell to a very low priority. Construction efforts were instead focused on warship and aircraft production. None of the tanks ever saw combat deployment. The Japanese would continue to develop amphibious tanks, however. Following the Ka-Chi was the Type 4 Ka-Tsu. This vehicle was also designed with the ability to be transported via submarine. After the Ka-Tsu, came the Type 5 To-Ku. This was the largest of Japan’s amphibious tanks and was based on the Type 5 Chi-Ri.
British military investigators studied the vehicles in Japan after the war. All 19 of the vehicles were reportedly assigned to the Special Cruiser Squadron of Yokosuka. This investigative team is responsible for the only images of the Ka-Chi, the ones displayed in this article. What happened to the vehicles after is unknown. They were likely scrapped. 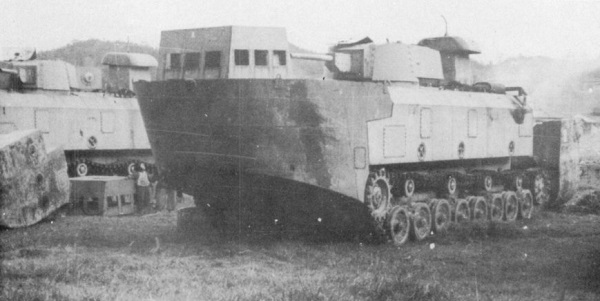 Is the Chi-He chassis/suspension extended?

There is no certainty about the exact provenance of the suspension but is certainly standardized, like most Japanese chassis of ww2.

Yes. The chassis was extended with an extra bogie added to the bell-crank suspension.
– TE Moderator

So it’s like a fat Chi-He with a bigger copula?

A Sumo Chi-He, if you will.
-TE Moderator

correction: there is no coaxial machinegun on a type 1 turret. there is 1 bow machinegun, of which the pontoon has a slot for- however it can not fire when pontoons are mounted. additionally there is 1 ball mount rearward-facing in the turret. however, both can be quickly removed and mounted on a limited traverse pintle onto the cupola. the pintle is stored on the hull when not in use.

Is there any historical reference to their color or is the stylized image at the top the best we have? I know in games it is a light, light gray.

how i find it in war thunder