Despite the Italian military having determined by 1938 that soldiers needed a protective transport, it was not until 1941 that a prototype of a large heavy APC was was actually produced. The vehicle, based on the chassis of a Dovunque 35 three tonne truck, was variously known as the Dovunque 35 blindato, Dovunque Scudato, Dovunque Protetto, and Trasporto Truppe Blindato Su SPA Dovunque 35.
In a memo dated on the 24th of May 1941, a study for an armored personnel carrier based on the Dovunque 35 truck was ordered along with other ideas for smaller wheeled carrier, halftracks and even fully tracked ones along the lines of the British Universal Carrier. By the 3rd of June, the Dovunque 35 idea, which effectively was a call to test the concept of a large truck-based APC, had expanded to include the idea of one based on the Fiat 626 truck too. 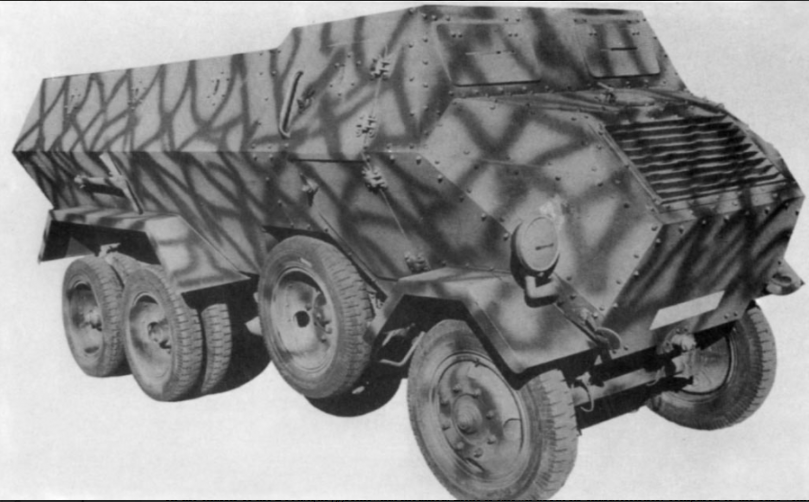 The donor vehicle was the Dovunque model 35 truck (Dovunque – ‘everywhere truck’), but a lot of work had to be done to convert it to be usable as an APC. Modifications were made to accommodate the extra weight of armor; these included improvements to the springs and brakes, and changes to the electrical fittings. It retained the successful 6×4 drive train of the truck though.
The engine was at the front followed by a large angular cab with two large rectangular hatches on the front. The cab also had a door on each side, which, like that of the A.S.37, unusually split in two with the top halves overlapping the lip of the bottom half of the door when closed. Access for the troops was via a single door of the same 2-piece type as the cab mounted on the back. A spare tyre was carried on a free-wheeling mount on each side beneath the cabin to assist when crossing rough terrain. 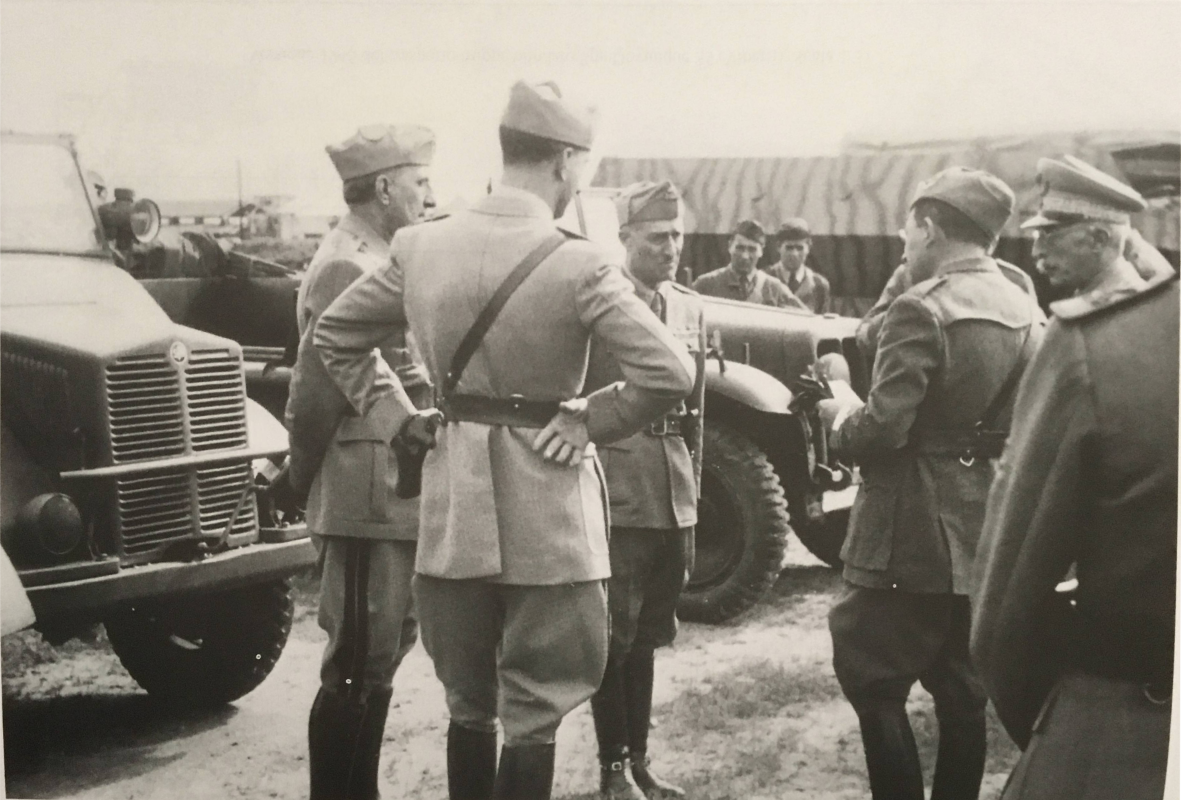 Prototype of the Dovunque 35 blindato seen during evaluation in Spring 1941 to members of the Italian High Command. The original camouflage pattern can be seen to be a two-tone pattern of vertical stripes unlike the later diagonal ones. Source: Pignato 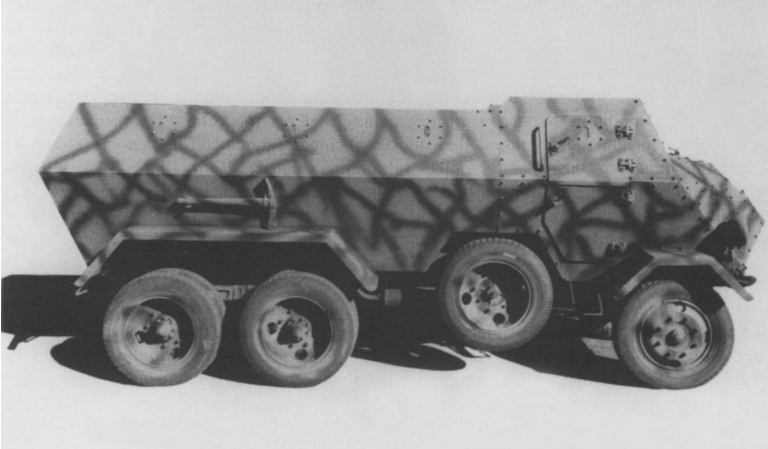 Right hand side of the Dovunque 35 blindato prototype. Note the lack of roof. The vehicle is camouflaged in a base yellow sand colour with bands of brown, this being the second camouflage pattern tested. Source: Museo Storico Italiano della Guerra di Roverto
The Dovunque 35 blindato was underpowered. It used a model 18vt 4.053 litre 4-cylinder petrol engine, which produced just 55/56hp at 2000 rpm and a 150 litre fuel tank. The A.S.37 on the other hand also used an 18VT petrol engine but it had been modified to deliver 67hp instead.

Protection for the crew and infantry was provided by 8-to-10mm thick flat steel armor plate cut to shape and bolted to a metal frame, though some parts were actually welded too. Like the A.S.37, the Dovunque 35 was open-topped, but it did feature 3 loopholes on each side for the troops to be able to fight from in relative safety. Two additional loopholes were mounted on the back of the vehicle, one either side of the door.
The driver sat in the front right and, unlike the A.S.37, there was an additional seat facing forwards on the front left. The rest of the seating consisted of wooden benches running from behind the cab to the rear with seating for 10 or so.

The Viberti-made Autotrasporto blindato SPA Dov.35, with the extra roof on. Three were apparently taken over in an unknown state of completeness. Illustration by Vishwadm, paid for with funds from our Patreon campaign.

Dovunque 35 blindata in use by Ia Brigata Nera Ather Capelli Turin in 1944.

Dovunque 35 blindata in use by Ia Brigata Nera Ather Capelli Turin in 1944.

The Dovunque 35 blindato was a good idea and reasonably well executed, but the early concerns over the weight of a fully protected truck sized APC were borne out. It was too big, too heavy, and too cumbersome when compared to the much lighter and much simpler Autoprotetto S.37. The Italian Army abandoned the Dovunque 35 blindato prior to the September 1943 armistice with just a single vehicle having been finished, although Fiat did not abandon it completely, as they finished the final design modifications on the 22nd of September 1943, after the armistice. 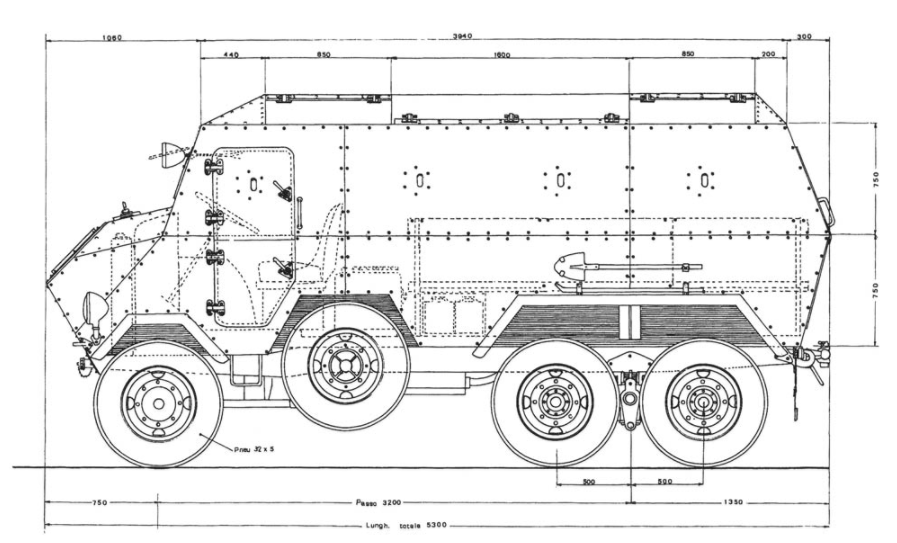 Following the September armistice, northern Italy and its industry fell under German control and at the end of September 1944, the design of the vehicle was handed over to the firm of Viberti. The original prototype was taken by the I Brigata Nera Ather Capelli Turin in November 1944, where it was photographed mounting a solitary Fiat Model. 1935 8mm machine-gun. The Ather Capelli Brigade was named after a noted fascist killed by communist partisans on the 31st of March 1944 and was formed in July 1944 in Turin. The brigade was involved in anti-communist actions in April.

The firm of Viberti, having received the design in 1944, examined the plans and designed a new version with a fully enclosed roof, adding 20cm to the height. Viberti now called this vehicle the Autotrasporto blindato SPA Dov.35. A small number of vehicles were manufactured by Viberti, but were left unfinished without their roofs in their factory in April 1945 when 3 of them (presumably the 3 which were most finished), were taken by forces from the Repubblica Sociale Italiana (RSI) – the Italian forces which remained loyal to fascist ideology and fought on the side of the Germans.
Two more vehicles were later taken from the company by partisan forces fighting the Germans and one is known to have been destroyed by a soldier from the 29th SS Division with a shot from a Panzerfaust, whilst on the Via Lorenzo Delleani (Lorenzo Delleani Street) in Turin, not too far from the Viberti plant where it had just been made.
The status of the others is not known.

The Dovunque 35 truck was a success as a design. It remained in production until 1948. The armored version, on the other hand, was not. Too big and underpowered it offered nothing that the A.S.37 did not and very few vehicles were ever made. Despite this, one example has been restored and can be seen in Italy during various shows. 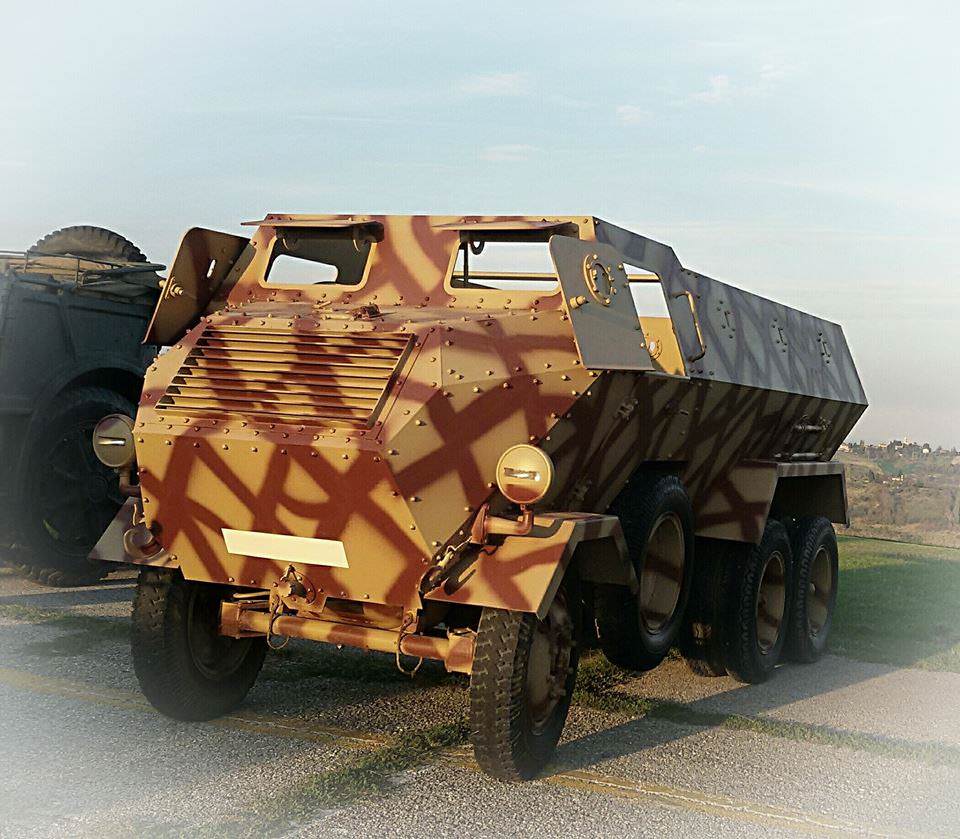 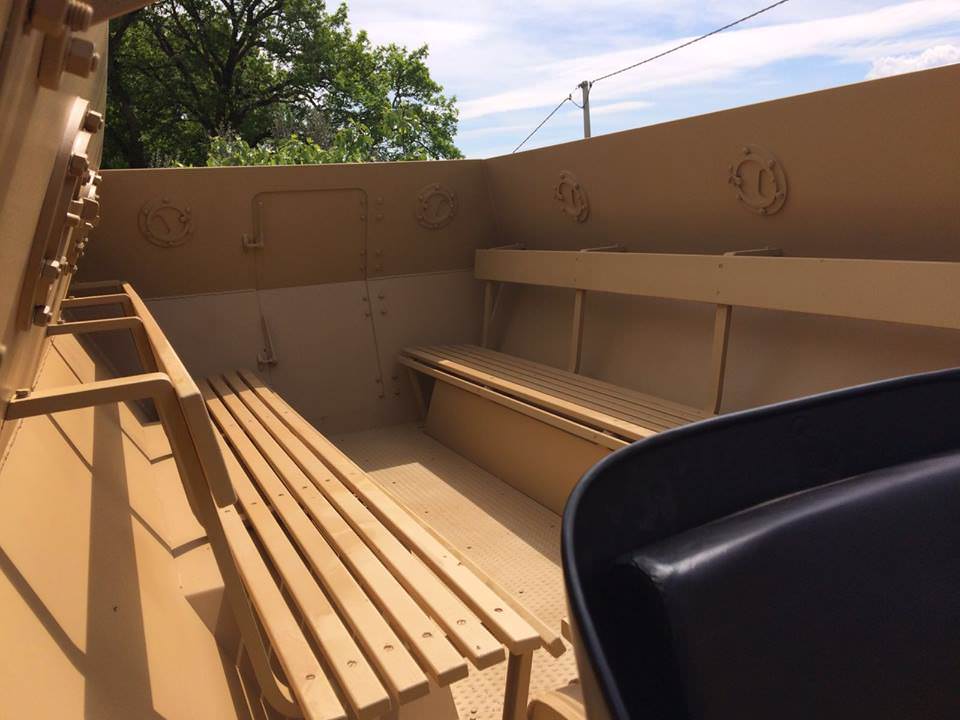 Views inside and out of the restored Dovunque 35 blindato. Sources: Image 1 SPa Miliaire and Image 2: Alessandro Bottega via SPa Militaire

Very interesting. I didn’t know the Italians had any conventional armoured personnel carriers like this. Cool!

The machine gun in the photo with the crew is a Fiat-Revelli 14/35, the upgrade of the glorious Fiat 1914