The CV3 (Carro Veloce 3 tonnellate), later known also as the L3 (3 tonne light tank), was the most widely produced and used Italian tank of the second world war, with production starting prior to the Second World War and continuing throughout. Several thousand were made and it, unsurprisingly, found itself used and converted to fulfill a wide variety of roles, from a recovery vehicle to a mortar carrier. One of the least known variants of the CV3 series is the self-propelled ramp (Rampe Semovente) version. 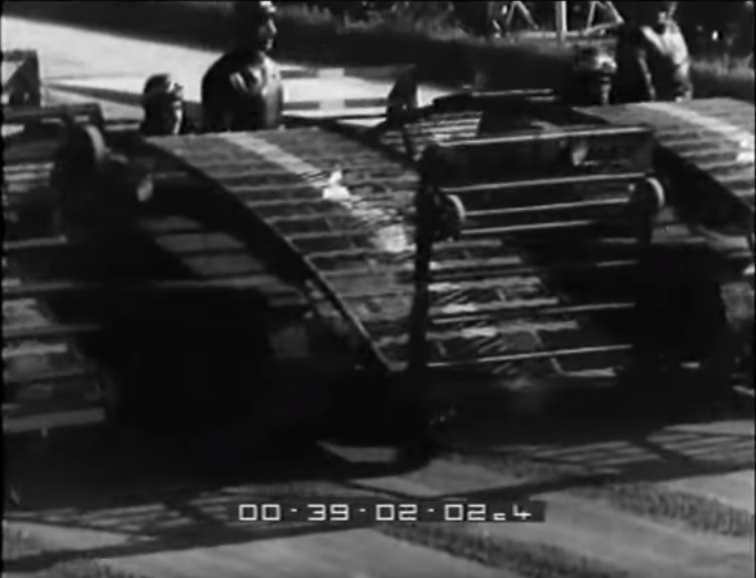 It is important to start with the name. This vehicle is so obscure that it is known only as a result of being recorded in footage of a parade in Rome on the 19th October 1938 attended by the Japanese Ambassador and Benito Mussolini who watched whilst on horseback. No formal name for this variant is known and, as far as it is known, no documentation for it seems to have survived the war. As a result, it is being referred to by the author only by a literal description of its role, a self-propelled ramp or, in Italian, ‘Rampa Semovente’, pending discovery of the actual name. 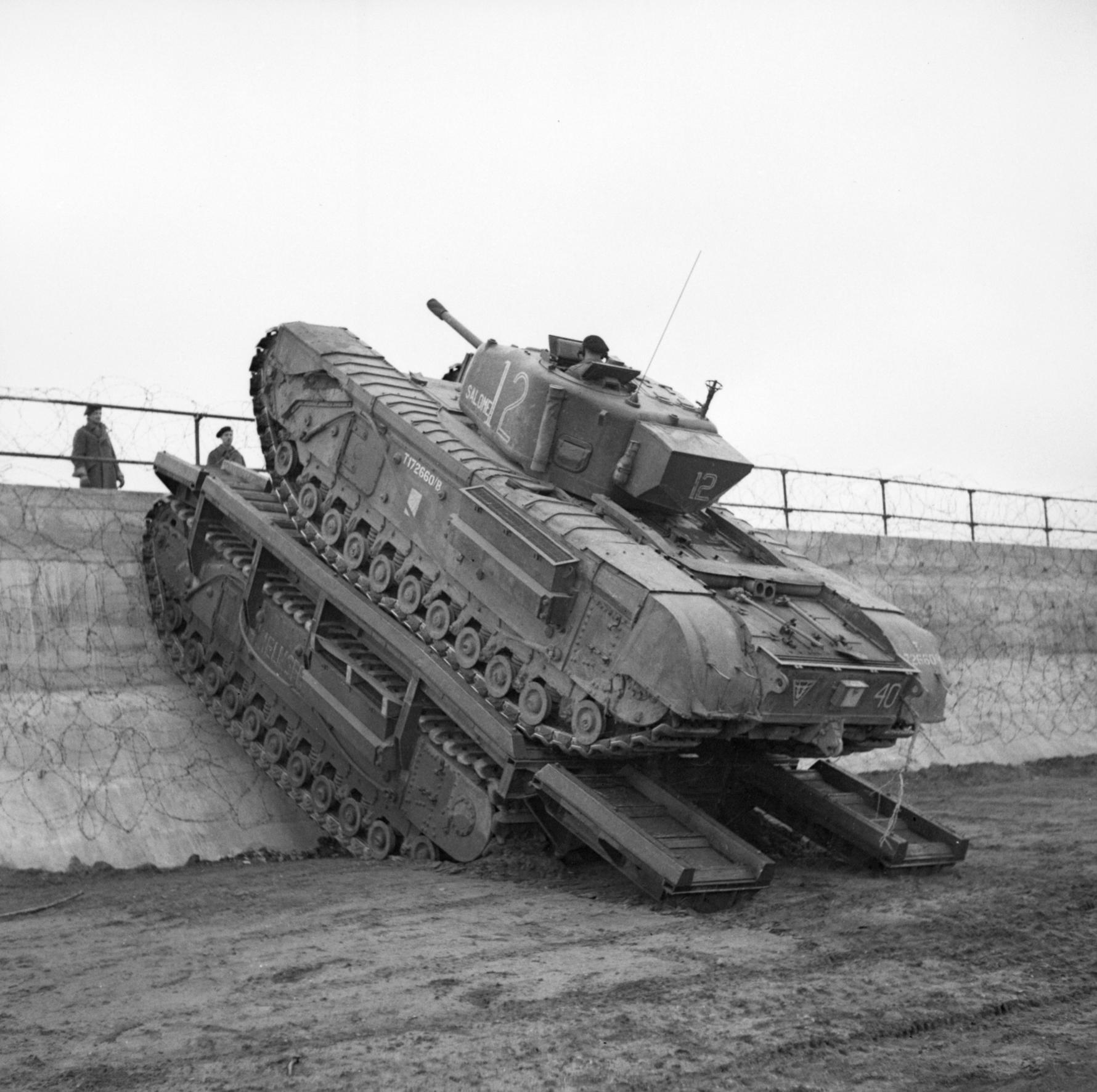 The most similar vehicle to this unusual-looking machine is the British Churchill ARK. ‘ARK’, or ‘Armoured Ramp Carrier’, could be used in two ways: either to provide a ramp which following tanks could pass over to clear high obstacles, cliffs, wall etcetera; or to create a bridge over a wide gap which would otherwise be impassable without a full-length bridge. There were various versions of the British ARK, but in Italy there had only been some limited tests with bridge layers from the CV3 and no prior work on an ‘ARK’ type system. As fitted to the CV3, this would work in exactly the same way.

The design of the bridge/ramp consisted of a single long curved span of framing, presumably made from steel, with the roadway laid over the top. The roadway consisted of a series of transverse steel supporting struts over which was a mesh forming the surface over which following vehicles would pass. A rectangular section right at the apex of the curve was missing, as this was directly over the heads of the two crew positions of the CV3 and would have prevented them from getting out. It can be inferred that the method of employment would involve the abandonment of the vehicle with the bridge in place and with a separate section of roadway being put over this gap, or else, it would not be useable by wheeled vehicles. It also necessitates the modification of the CV3 vehicle with the removal of the two roof hatches that would otherwise not be openable. Another modification to the CV3 was the fastening of supporting brackets for the curved roadway to the body. It is not known if the main armament – a pair of machine-guns – was removed or not. They would not interfere with the bridge, but the use of such a weapon firing through the roadway grille would be very restricted and could damage the roadway.
The curvature of the framework attached to the body of the tank provided sufficient stiffness and strength to bridge or ramp over an obstacle and still bear the weight of passing tanks or trucks. At the front and rear of the design are folding ramps on wheels which can be lifted or lowered into position providing the short span required to cover the gaps between the bridge section and the ground, and to account for undulations in the ground.
A final, and helpful touch is the addition of a longitudinal white stripe painted across the roadway section which would assist vehicles in staying in a straight line as they pass over the vehicle.

Illustration of the ‘Rampa Semovente’ by Bernard ‘Escodrion’ Baker, based on work by David Bocquelet.

The vehicle clearly retains the original two-man crew of driver (right), and commander/gunner (left), although the status of the armament is unknown. No other modifications are known to the vehicle, but in use – even if just a parade – the vehicle is seen carrying the bridgeway with the end folded up. Upon arrival at an obstacle, the ramps can be released, presumably from inside via a cable release, rather than outside, which under fire would have been extremely hazardous. Once in place, the crew can either get out and leave it in situ for as long as the ramp is in use or simply wait for the one of two vehicles immediately behind to go over the top before withdrawing. 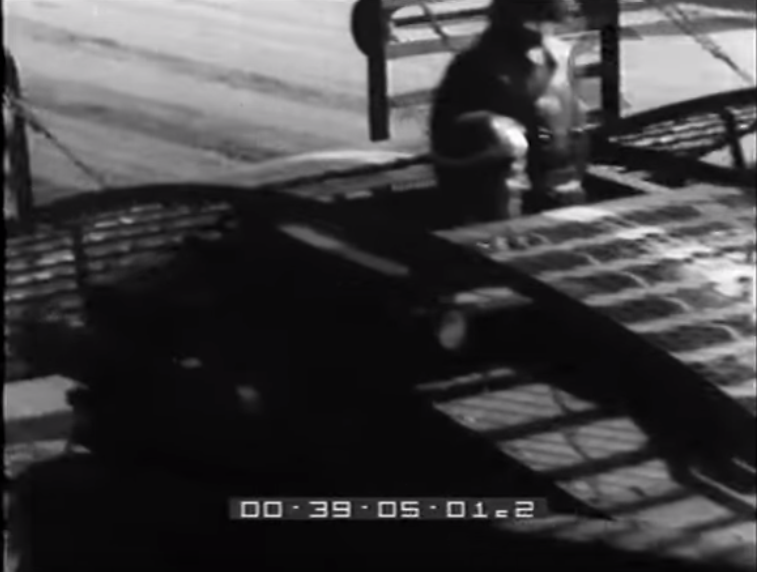 With the crew having to abandon out of the top rather than out of the sides, as on the British ARK, they would be dangerously exposed to enemy fire and, with the bridge section curved over the front, any firepower of the vehicle would also be limited. The relatively small size of the bridge carried and the overhang at the front and back severely limited the mobility of the vehicle. Likely, these are these reason that very few (perhaps just the three shown in 1938) were built. None are known to have seen any active deployment and the status of the vehicles is unknown. 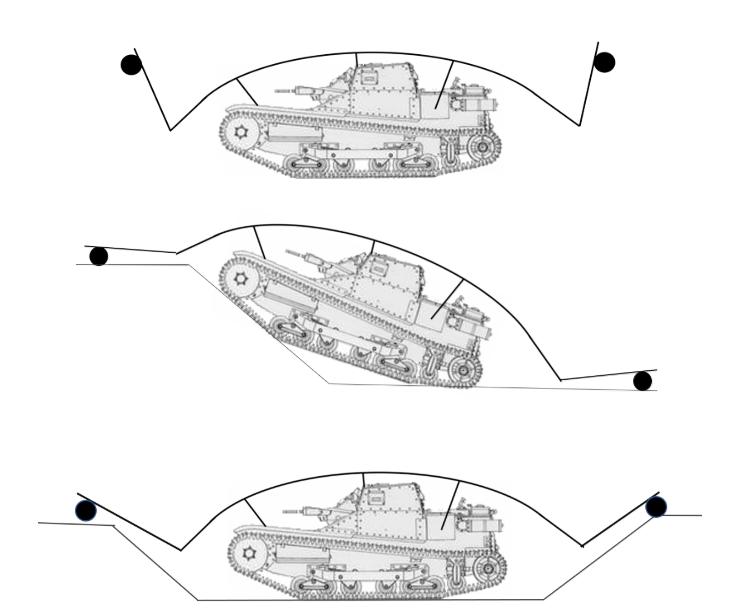 An impression of positions for the ramp in use. Top: Carriage, Middle: As a ramp, Bottom: As a bridge

One reply on “CV3 Rampa Semovente”