After Hitler’s victory in the 1933 elections, Germany started rearming and expanding its army. Due to the treaty of Versailles, the German army wasn’t allowed to have any tanks when Hitler came to power. Officially called the Sd.Kfz.101 (Sonderkraftfahrzeug/Special-Purpose Vehicle), the Panzer I became the first mass-produced tank of the Wehrmacht. In 1933, after extensive trials, production of the Sd.Kfz.101 began.

Although still called the Panzer I the Ausf.C version was a very different vehicle. It had torsion-bar suspension with large interleaved road wheels. It had a more powerful Maybach HL45 150 hp engine. These new features gave the tank a top road speed of 65 km/h even though the armour thickness had been doubled, compared to the PzKpfw I Ausf B, to 30 mm at the front of the tank.
A long-barrelled 7.92 mm E.W.141 self-loading semi-automatic machine gun was mounted in the turret next to a standard 7.92 mm MG34 machine gun. It was intended to be used by the Luftlandetruppen (Airborne troops) and the Kolonial Panzertruppen (Colonial Armoured Troops). In early 1943 two were sent to the Eastern Front for combat evaluation. In 1944 the other 38 were issued to LVIII Panzer Reserve Korps which fought in Normandy. Panzer I Ausf.C light tank of the LVIII Panzer Reserve Corps, which fought in Normandy in 1944. With the help of the bocage and their high velocity armament, they gave good account of themselves. This tanks gun has a dirt cover over the barrel used in long drives outside the combat area.

The Panzer I Ausf F had additional protective armour: the front armour was now 80 mm thick. It was intended to be used against fortified strongpoints and have a weight limit of 18 tonnes so that it could safely drive over army engineers combat bridges. In September 1942 seven were reported as being used on the Eastern Front, near Leningrad. Five more were sent in January 1943. An additional 11 were sent to the Eastern Front with two other units between Aug – Nov 1943. One is preserved at the Kubinka museum, another in Belgrade. Panzer I Ausf.F light tank of the 1st Panzer Division at Kursk

The Panzer I in Spain

After the Civil War broke out in 1936, the two opposing sides quickly found themselves supported by friendly countries, which desired to test their equipment and tactics. For obvious ideological reasons, the Soviet Union quickly chose to support the Republican Front and sent waves of T-26s, a Russian derivative of the Vickers 6-ton. On the other side, the Nationalist Forces were supported by Germany and Italy. Italy sent dozens of CV-33 tankettes, with Germany sending the then only tank available. Approximately forty-five Panzer I Ausf.A tanks were sent, followed by seventy-seven Ausf.B tanks. Most of were delivered to the Gruppe Imker, the tank unit of the Condor Legion under Hugo Sperrle. The Spanish forces dubbed them “Negrillos”, due to their dark grey paint. Most were quickly painted in a new lighter scheme.
The first engagement that the Panzer I took part in was the battle of Madrid. Here, the Nationalist forces managed to defeat the Republicans, despite the Panzer I being inferior to the T-26. Only at very short range and using AP rounds could the Russian tanks be taken out. Col. Wilhelm Ritter von Thoma even offered rewards for every captured T-26, so he could bolster his unit’s abilities.
In August 1937, General Pallasar received a request from Franco to upgrade several Panzer Is with the 20 mm (0.79 in) Breda model 1935. Only four were converted at the Armament Factory of Seville in September 1937, and further orders were suspended due the large number of T-26 tanks available by then. The Panzer I remained in service with the Spanish until 1954, when it was replaced by the M47 Patton.

The Panzer I on Wikipedia
A list of surviving examples today

A kleiner Panzerbefehlswagen or light command tank. Based on Ausf.B hulls, around 200 of these high profile, fast command tanks were built. They led Panzer Is in Poland, France, the Balkans, Africa and Russia. The last were still in use in 1943 for urban police duties in many European cities.

The Panzerjäger I was based on the Ausf.B chassis and was the earliest German tank-hunter.

The sIG 33 auf Panzer I Ausf.B was probably the most overloaded platform ever to carry a howitzer. 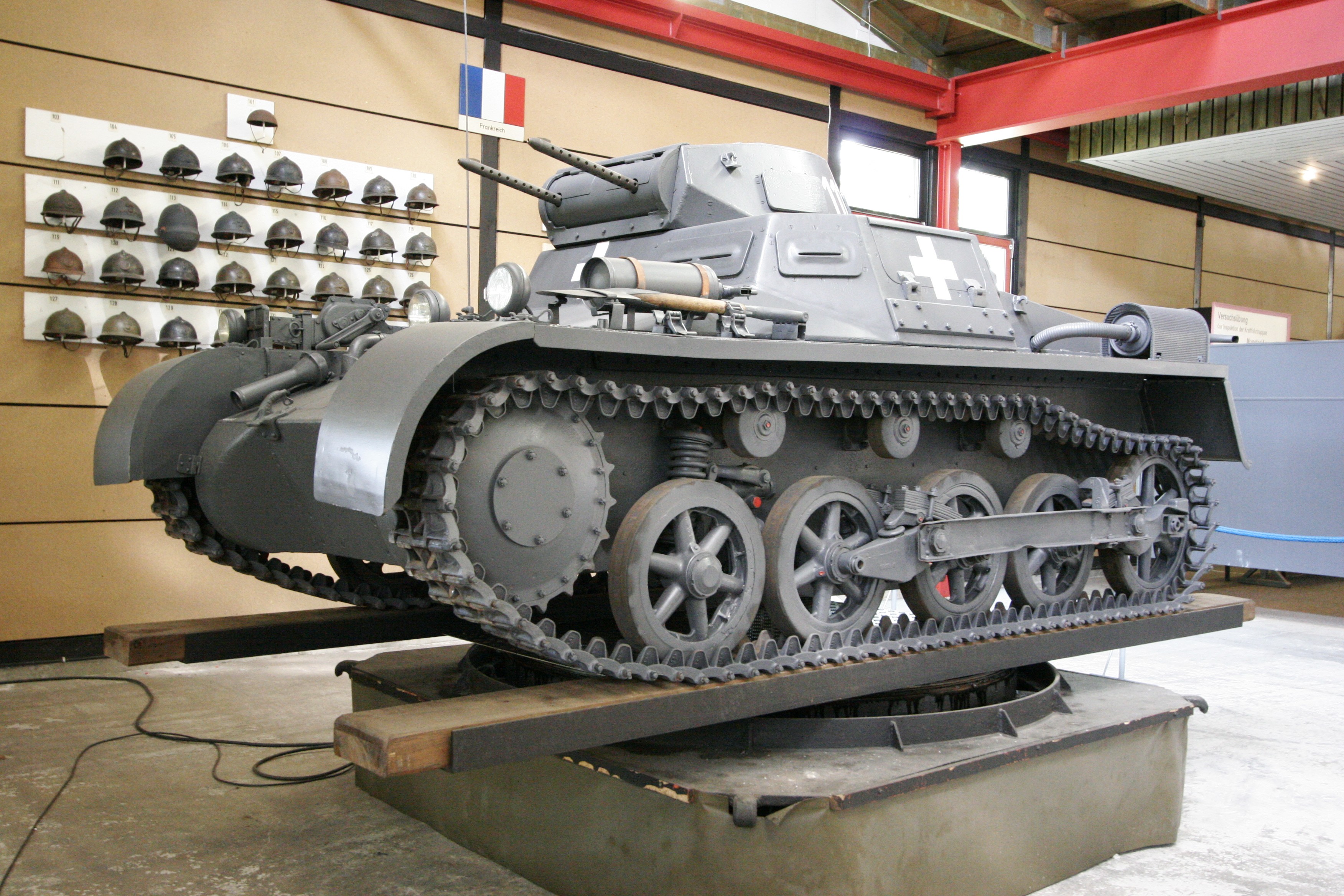 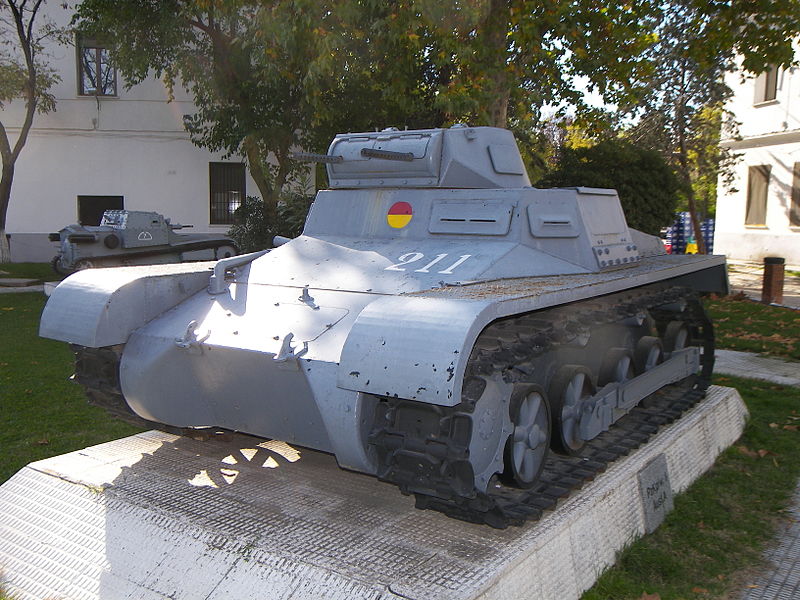 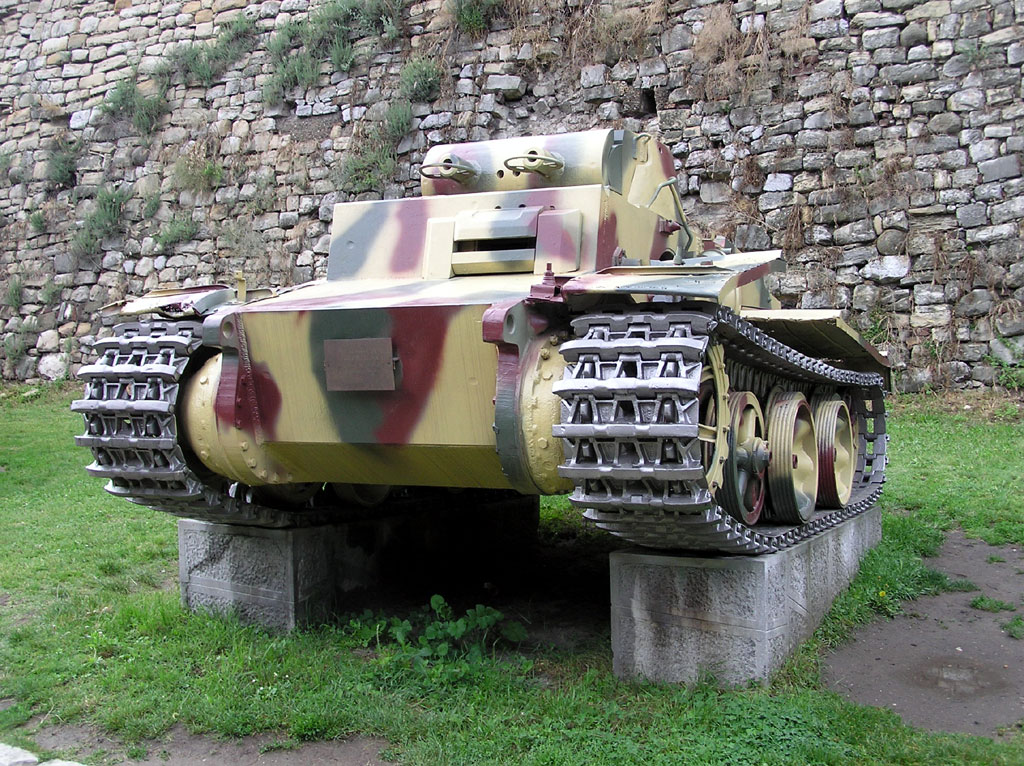 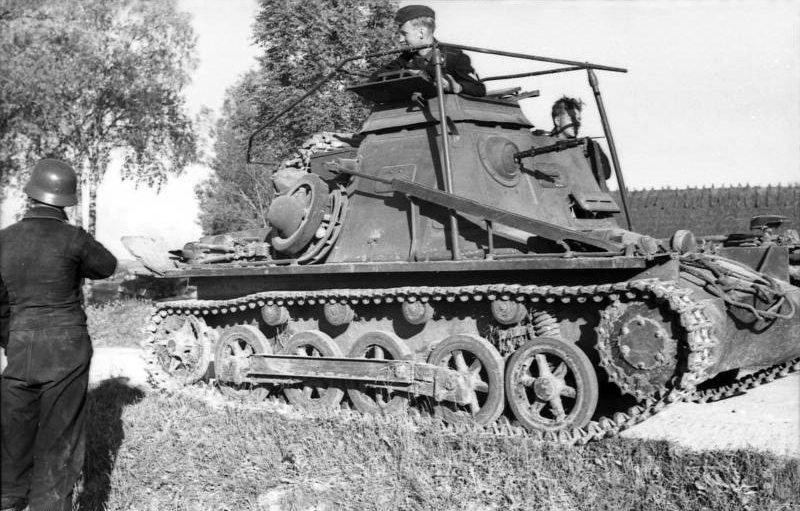 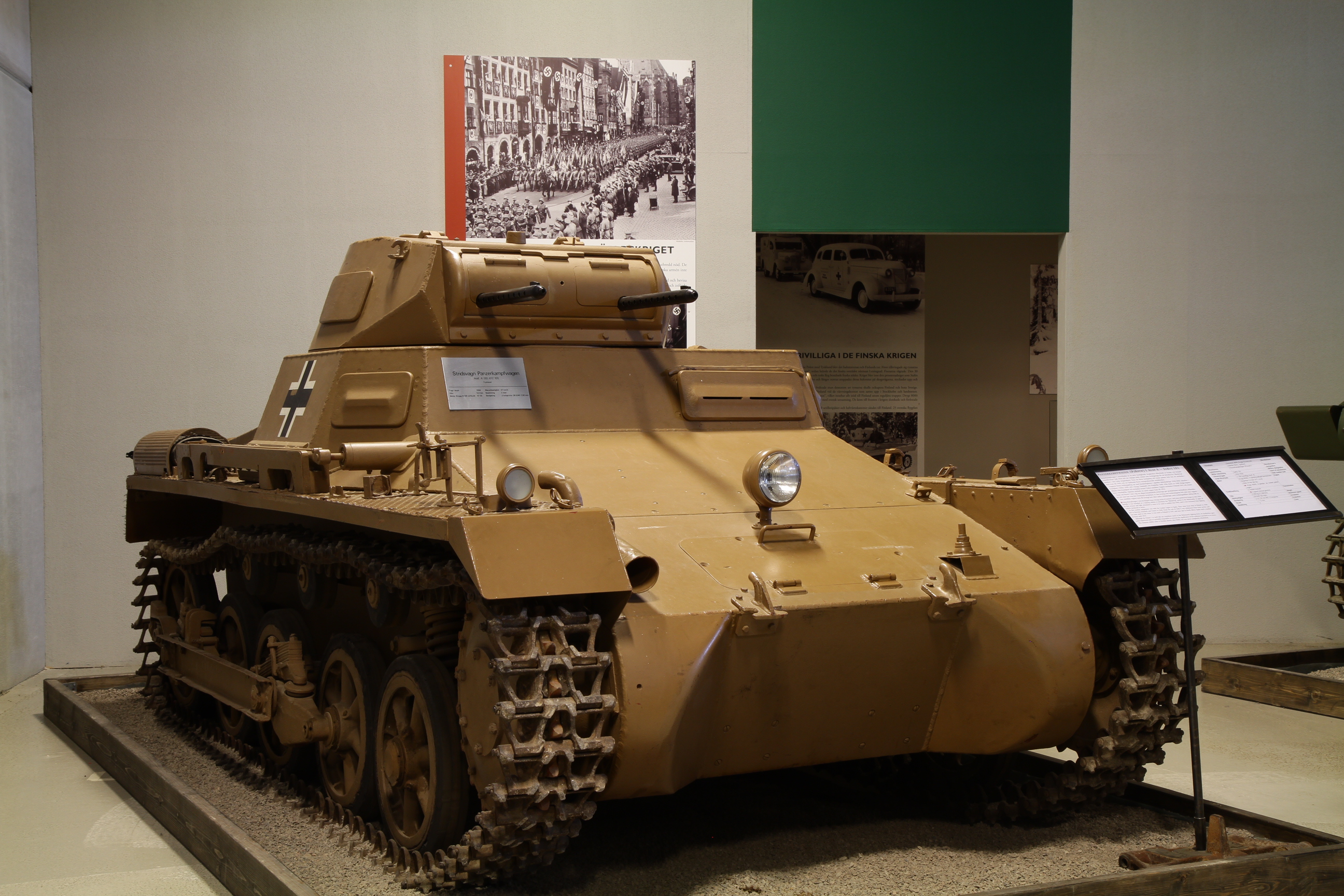 Panzer I Ausf.C light tank captured by US troops in Normandy.The machine guns have been removed.(NARA) Rear view of the Panzer I Ausf.C light tank captured by US troops in Normandy.(NARA)

Typo, you nailed it. It was the XVIth.
Thanks !

Hello!
Indeed, there has been a confusion between the 16th Panzer Division and the XVIth Corps.

One other thing on that particular vehicle. Weren’t the crosses on the vehicles only standardized as black-and-white after the Polish campaign?

You are correct again. I will notify our illustrator.
Thank you for all this info, this article is very old and needs a serious re-do.

i have heard of the Panzer I (Ausf B, and Panzerbefehlswagen) seeing service among the Hungarian army within the 1st Armored Division and saw combat in late 1942.
what would they have looked like?
cause i can’t find pictures of them

Hello Evan,
We have consulted with other persons knowledgeable in the field, and they have found that Hungary did indeed, buy a Panzer I Ausf.A in 1937 and 8 Panzer I Ausf.Bs in 1942.
One of them was assigned to the 1st Cavalry Division. 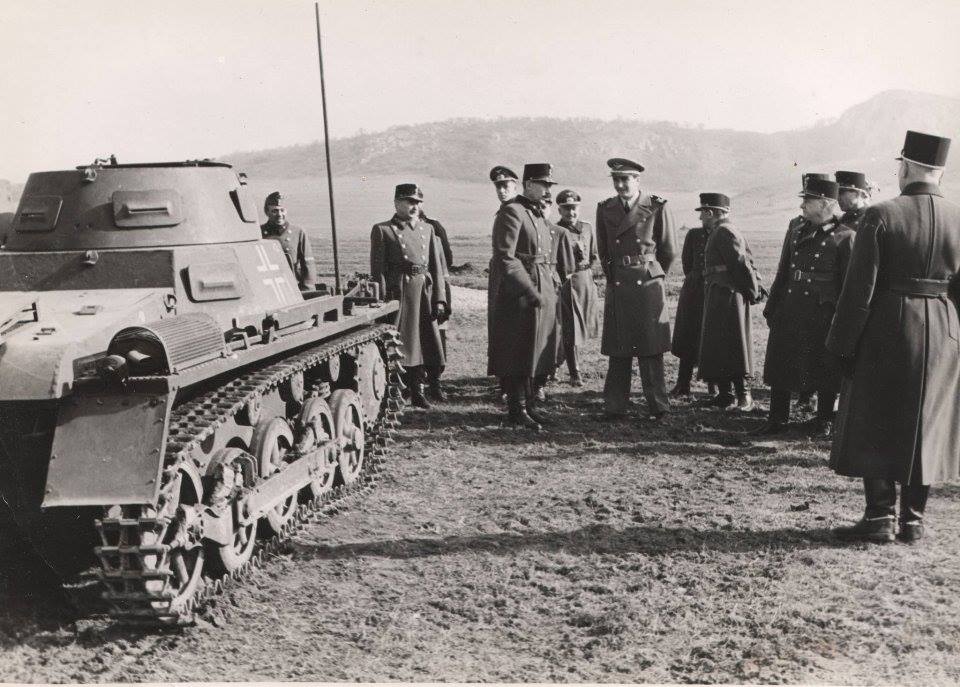 I heard the Japanese purchased a small number of the Panzerkampfwagen 1, in the late 1930s. Could you enlighten me on this subject? (i.e. whether or not they were used in combat, etc.)

Well, probably it was China, not Japan I think.
https://en.wikipedia.org/wiki/Panzer_I#World_War_II_in_China

You are correct, Panzer Tracts corroborates this!
Fixed! Thank you!

Thanks for spotting that one, it has been corrected
TE Moderator

Actually, i did find a photo of a Pz I Ausf. C that clearly was camouflaged. I’m not sure where the photo originally came from as the link is dead, but the photo survives. Likely served at Normandy or after.
http://www.wardrawings.be/WW2/Files/1-Vehicles/Axis/1-Germany/01-lePanzers/PzKpfw1/File/3-Models.htm#Panzer1C

Did the Panzer I carry a radio?

Panzer IA and IB tanks were both fitted with Fu2 receivers only. No transmitters were installed in either version

Earlier today I discovered some photographs and articles online about a pz1 with a 7.5 cm gun mounted on it for the defense of Berlin. I dont know if more than one ever existed, but it was certainly interesting. You can easily find images online with a quick Google search.

What is the basis of the camouflage scheme shown on the fourth example (Panzerkampfwagen I in Spain, Nationalist forces, Legion Condor, “El Negrillo”, June 1938)?
https://www.tanks-encyclopedia.com/ww2/nazi_germany/Light_Tanks/Panzer-I/Pzkpfw-1B_spain1937.png
I love that colour scheme, but cannot find anything to corroborate it.

I’d have to ask the original author of the article for where he got the reference for it.
In any case, it’s absolutely inaccurate. Panzergrau was never used on Panzer Is supplied to Spain. All of them would have been a three-tone Buntfarbenanstrich pattern of varying types. Some local Spanish variants of the type are noted, however, especially towards the end of the war and with modified vehicles.
Here are some references for you:
http://i.imgur.com/bLx84wI.jpg
This is a still from colour footage of a late war pattern. I believe that the colours are slightly off in their tone due to the type of film. I also suspect that the Nationalists repainted them.
https://www.tanks-encyclopedia.com/ww2/spain/panzer-i-lanzallamas/
https://www.tanks-encyclopedia.com/ww2/spain/panzer-i-Breda
To discuss colours and markings further, I’d encourage you to join my Facebook study group ‘Spanish Civil War Vehicles – Tanks, Armoured Cars, and Aircraft’.

Thank you, your clarification is much appreciated! Unfortunately, I don’t have a Facebook account due my wearing a tinfoil helmet 😉

15cm sIG 33 (sf) link when clicked on for a larger picture gives a 404 missing page error instead. Also, this vehicle has been mislabeled “Bison”. This nickname was in fact ascribed to the 15cm sIG 33 (sf) auf PzKpfw 38(t) Bison SdKfz 138. Awesome SITE!!!

hey what was the use of the panzer 1 ausf.F? i saw it was an infantry support tank but what’s its function as a support tank?

Do we know of any surviving examples of the Panzer I Ausf. C?

Take a closer look at the Swedish Pz 1
https://youtu.be/9ghhtHjcDe0

A little confused about the speed of the Panzer IC. Here it shows a speed of 40 kph or roughly 25 mph. All other sources say that this tank was built on speed and therefore with the bigger engine could hit speeds nearing 80 kph or roughly 50 mph. Is this just a typo or are the speeds overestimated?

…thank you very much, for your wonderful work here…

Hi, I have a question about Panzer I ausf C: How many hatches has it? Was the turret hatch used by both the master armorer and the driver, given its greater ergonomics? Because I seem to notice, one small hatch even for the driver, but very small, narrow and for large part it under the turret. Looking forward to your reply, best regards.

Ignore that, I can see the stubs for the missing external road wheels.. my bad.. doh