The Development of a new medium artillery tractor started in 1934 as planned by the Waffenamt, and after a proposal, started at Büssing-NAG, Berlin. As designed it could carry up to 11 men in three rows, of three (nine), plus the driver and co-driver. It could also be covered by a canvas structure. It became the main tractor for the 10.5 leFH 18 howitzer, but it proved capable of towing pioneers's heavy equipment, for engineer units. Propulsion wise, the Sd.Kfz.6 carried a 90 or 115 hp (67–86 kW), depending of the version. This finely engineered half-track truck was built to 750 units until 1942, but with the needs of the Russian campaign, it was not enough. Production was ramped up and reorganized in 1943 under Alber Speer, carried out by Daimler-Benz in addition. When the war ended in Europe, a grand total of 3,500 vehicles has been produced. It was used by many units, including the Wehrmacht, the SS and the Luftwaffe, on all fronts. The dKfz.6 was declined into three known variants:

Design of the "Diana"

Captured Soviet 76mm F-22 guns were plentyful in the German arsenal, and it was decided to use the SdKfz.6 to carry it as a portee, protected by a partially armoured superstructure. The idea was to create and cheap tanks hunter with ease, which can assist armoured units to deal with British tanks in the North African Campaign, desperately short of antitank vehicles. There, it joined the Panzerjäger-I, already an early conversion based on the now obsolete Panzer I chassis, and using captured 47 mm Czech antitank guns.

The F-22 was conceived originally as a "semi-universal gun", combining the capabilities of a divisional gun (both antitank and anti-personal) and even an anti-aircraft gun. It was the idea of Mikhail Tukhachevsky, the head of the ordnance department between 1931 and 1934, which launched its development as a priority. A single model had numerous advantages, balancing the possible limitations as an AA weapon. A cheap production because of the scale, easy maintenance thanks to universal parts, and supply for providing the same ammunitions. The caliber was based on the French "75" and in general the 3-pounder was considered a standard field gun at the time. Seeveral design bureaus teamed up, resulting on the universal A-52 and semi-universal A-51, later standardized as F-22 by V. G. Grabin, at Novoye Sormovo (no. 92) plant in Gorky in 1934. In 1935 three prototypes were tested, and on 11 May 1936 it was adopted as the "76 mm divisional gun model 1936 (F-22)". As in standard, this gun had a split-trail carriage with suspension and rubberized steel wheels. It used a semi-automatic vertical sliding breech block and its recoil mechanism used a hydraulic recoil buffer and hydro-pneumatic recuperator. Sights and the elevation controls were located on either sides barrel. It used the standard model 1900 cartridge, which includes old 76.2-mm divisional/regimental stock shells. Production started in 1937 until 1939 to 2,932 pieces registered.

Following Operation Barbarossa in the summer and until the winter of 1941, many were captured by the Wehrmacht (perhaps 800). They were pressed into service as the FK 296(r). But with the growing demand for antitank guns, they were modified in 1941, as 7.62 cm PaK 36(r). It was rechambered to take a bigger cartridge, and accordingly had a modified recoil system. Elevation controls were moved on the left side close to the sights as in standard German practice. Elevation was limited and muzzle brakes were fitted, and it was delivered with new AP ammunitions. This gun reached the battlefield in 1942, spring, 560 converted and later available to be used by the Marder II and Marder III tank destroyers. Only nine original F-22s, in their original configuration and captured shell supplies ended mounted on Sd.Kfz.6 halftrack. Base Performances: Depression: -5°, elevation 75°, Traverse: 60°, Rate of fire: 15 rounds per minute, Maximum firing range: 14 km (8.69 mi). With AP shells, it reached 690 m/sec. and on a 7,000 m range. Armour penetration figures ranged by distance: 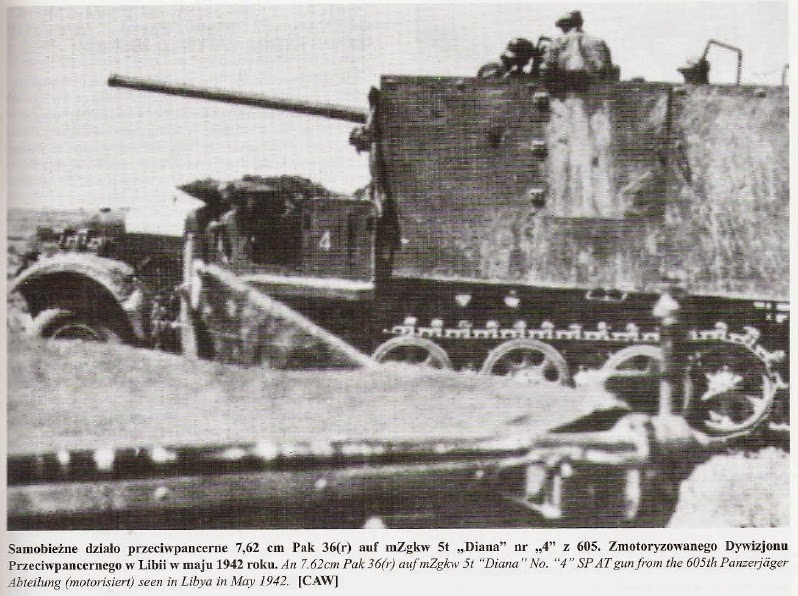 The vehicle was converted at Alkett, in a quick and easy way. The platform were the benches were attached was cleaned out, benches removed, sides too, and a simple rectangular structure was built around the main gun, places at the front, with its servants behind. The structure was armoured on four sides but the open roof. Framing was installed to place a tarpaulin above. The front plate, 8 mm thick, comprised a large opening which can be closed by half plates and a middle one, opened to leave the gun barrel in fixed position. Sides comprised four plates, one on either side, folded inwards to constitute the front and back plates, and two doors hinging forward. There was also a back plate access with two doors. Ammo racks were installed on both sides.

With only ten vehicles built (other sources speaks of nine, possibly one kept for testings, the vehicles seemed to have been shipped right after completion to Africa, creating the 605th Panzerjäger Abteilung (motorisiert). This units was created for the DAK, attaced to the 15th panzerdivision. Originally it was set up on August 26, 1939 attached to the 3rd Army corps. It was equipped with 8.8 cm Flak 18 guns by October 1939. On May 10, 1940, this unit was attached to the IV Army Corps and in October 1940, re-equipped with 4.7 cm anti-tank gun. It became the Panzerjäger Abteilung (Sfl) 605, re-equipped with Panzerjäger-Is. It was relocated to Africa in March 1941. By May 1942, after the losses, the nineself-propelled 7.62-cm anti-tank guns replaced them. It was by then fully integrated in the German Africa Corps, with three Jagdpanzer 1 companies, one Sd.Kfz 6/3 company. On February 26, 1943 it was dissolved and its remains used to refresh the Panzerjäger Abteilung 190. So its possible some of these vehicles were attached to the one of the five companies of the 90th Panzer Grenadier Division, destroyed in Tunis in May 1943. Ifany vehicle survived later, they would have been attached into the reorganized unit in July 1943 which served in Sardinia with the 90th PZD. 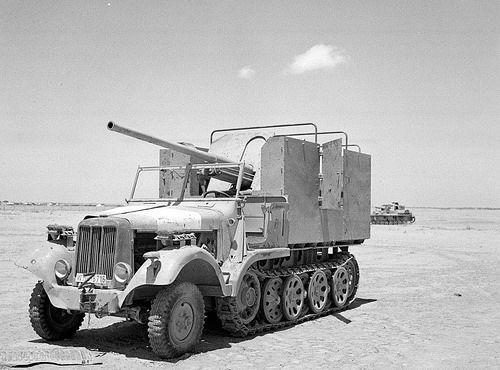 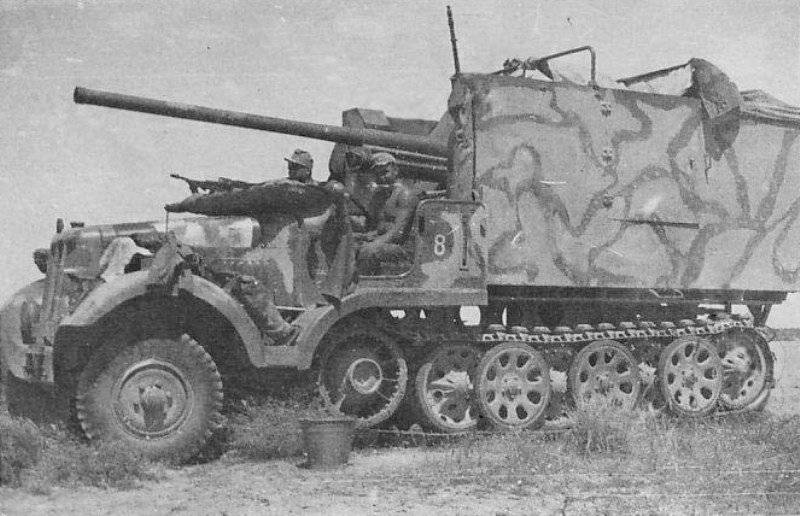 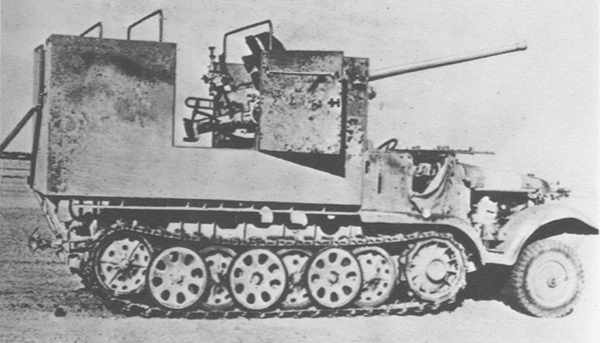