The NA 75, a workshop improvised Churchill variant, is a testament to the ingenuity of one British officer, Captain Percy H. Morrell. An officer of the Royal Electrical and Mechanical Engineers (REME), Captain Morrell served in Tunisia and was charged with disassembling and breaking down battle damaged tanks, in particular, M4 Shermans.
The Captain noted that many of the 75 mm (2.95 in) M3 guns equipping the Shermans were still in an operational condition. As such, he began formulating a plan to make use of them by mounting them into the turret of Mk.IV Churchills.
These tanks would be designated as the Churchill NA 75. This was attributed to the vehicle’s place of birth, NA – North Africa, and the transferred 75 mm M3 gun. 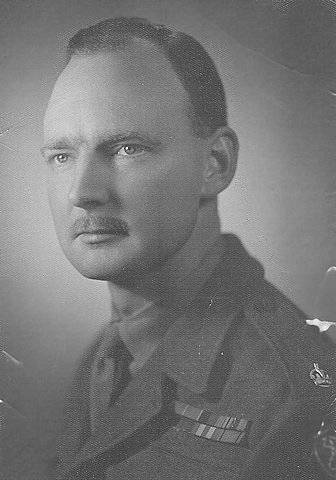 Percy Hulme Morrell enlisted at Leeds on June 29th, 1940. He rose through the ranks to be granted an emergency promotion to Second Lieutenant on February 6th, 1943. He was posted to North Africa in the April of that year – Photo: track48.com

Morrell aimed to achieve 2 goals with one action. A noted weakness with the Churchill was the inability of its main armament to fire an effective HE (High Explosive) round. This was a problem faced by the Mk.I and II with their 2-Pounder guns, and the Mk.III and IV with the 6-Pounder. Both of these guns lacked a powerful HE round, so anti-infantry and emplacement operations were difficult. Because of this, ironically, an Infantry Tank was not able to properly support infantry. The Sherman’s 75 mm (2.95 in) M3 gun did not have this issue, as it was able to fire quite a potent HE round.
Morrell had also noted that many Churchills lost in battle around the Medjerde Valley and similar engagements, had received hits to the gun area. It was apparent that in the bright sun of the desert, the recessed mantlet caused a visible shadow, providing a clear aiming point for German gunners. High-velocity 75 mm (2.95 in) or 88 mm (3.46 in) shells hitting this area would either jam the weapon in place, pass straight through the mantlet or knock the whole thing clean off its trunnions.
The Sherman’s external mantlet, specifically the M34 type, provided a quick fix to this problem, giving this weak area a much need boost in armor protection. It was hoped that its curved shape might induce a ricochet and also obviously remove the dark recess aiming point.

Captain Morrell’s concept drew enough interest for Major General W.S. Tope, Commander of REME in the Mediterranean theater, and John Jack, a civilian engineer from Vauxhall Ltd. to join him in Tunisia. They would assist Morrell with the project at the workshops in Bone. It was classified as “Top Secret” under the codename of “Operation Whitehot”. 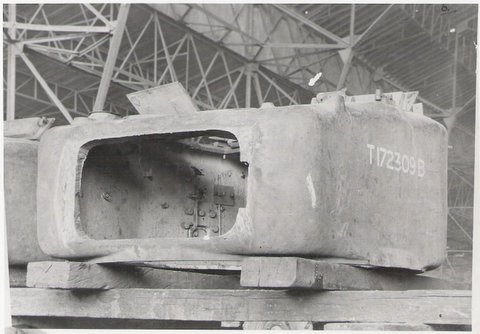 A turret with the face re-cut for the adoption of the new mantlet and gun. The extra piece cut on the right is for the coaxial machine-gun – Photo: Haynes Publishing/Morrell Family Archive
Some 48 Mk.IV Churchills were the first to undergo the modification in North Africa. The method of inserting the gun was thus:
1: The Churchill Mk.IV’s standard issue armament, the Ordnance QF 6-Pounder (57mm), was removed. The removed 6-Pounder guns were returned to Ordnance Stores.
2: The original mantlet hole on the turret was widened.
3: The gun was rotated 180 degrees to suit the crew positions in the turret, and inserted, complete with the M34 mount.
4: The gun was welded in place, including the new external mantlet.
The turret also saw the addition of a counterweight in the rear due to the increased size of the armament. Room was also made on the left of the gun for the addition of the Sherman’s coaxial 30 cal. (7.62 mm) Browning M1919 machine gun. The machine gun only had a limited range of motion due to the cramped conditions. As such, it could not elevate as high as the main armament. 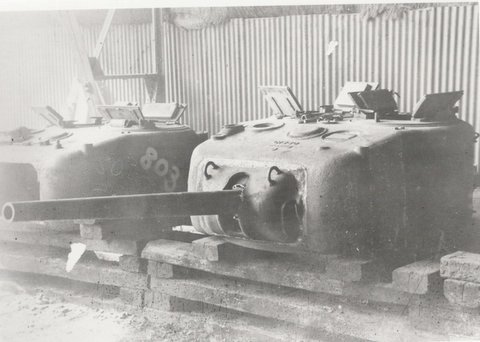 Almost complete turrets waiting to be mounted back onto their hulls. The mantlet is not yet added – Photo: Haynes Publishing/Morrell Family Archive
The tanks were tested under the supervision of Major ‘Dick’ Whittington, Gunnery Instructor at the Royal Armoured Corps (RAC) Training Depot at Le Khroub. The Major commandeered a deserted Arabic village, which was ranged at 8,000 to 8,500 yards. The tanks, now armed with an effective HE round, rained shell after shell on the abandoned buildings. The tests were a success. It was surmised that the Churchill provided a much more stable firing platform which, unlike the Sherman, stood fast to the recoil of the gun, meaning the fire would be much more accurate. 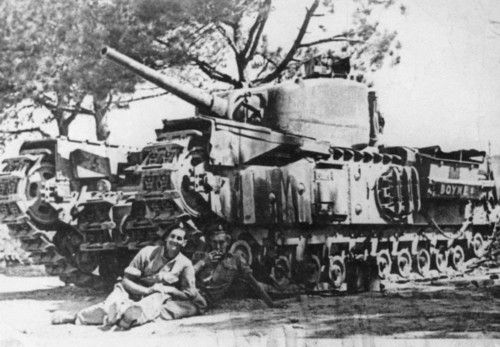 The crew of a Churchill NA 75 with the name “Boyne”, take a break in the Italian sun. Boyne was part of 1 Troop ‘B’ Squadron. Commander Lieut B.E.S.King MC. The crew in the photo: Gunner, L/Cpl Cecil A.Cox with Operator, Cpl Bob Malseed. Boyne was later knocked out by a Panzer IV – Photo: www.ww2incolor.com 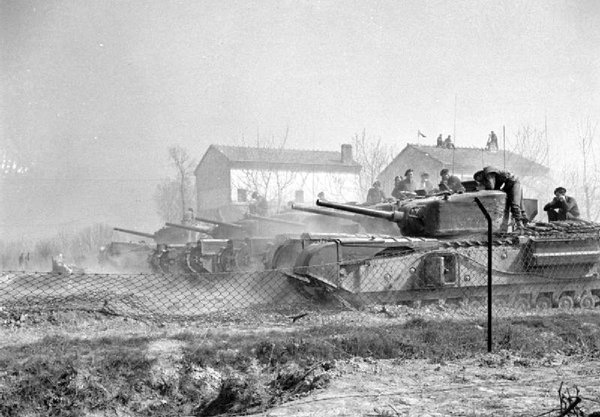 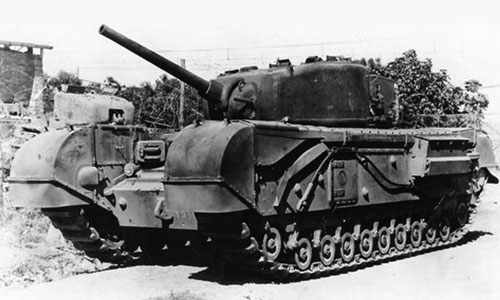 One of the first Churchill NA 75s photographed at the workshops in Bone, Tunisia. Note how limited the elevation of the coaxial MG is. At full elevation, it is still a few degrees away from being inline with the 75 mm (2.95 in) – Photo: Haynes Publishing

In total, 200 Churchill Mk.IVs were upgraded to the NA 75 standard. These would go on to serve in the Italian campaign, where Major General Tope commended their service with the 21st and 25th Tank Brigades in the month-long fighting between Arezzo and Florence.
A shortage of tanks meant that the Churchills would work alongside Shermans. Because of this, the Churchills would, for once, be used in their intended role as infantry support tanks. The Churchills would blast their way through the battlefield, while the faster Shermans and infantry exploited any breakthroughs.
Witnessing their success first hand, Tope sent a letter back to Morell: “I should be glad if you would congratulate the REME concerned on doing a quick job which had been most valuable to this brigade.” The NA 75 would go on to serve in Italy until the end of the war in 1945. 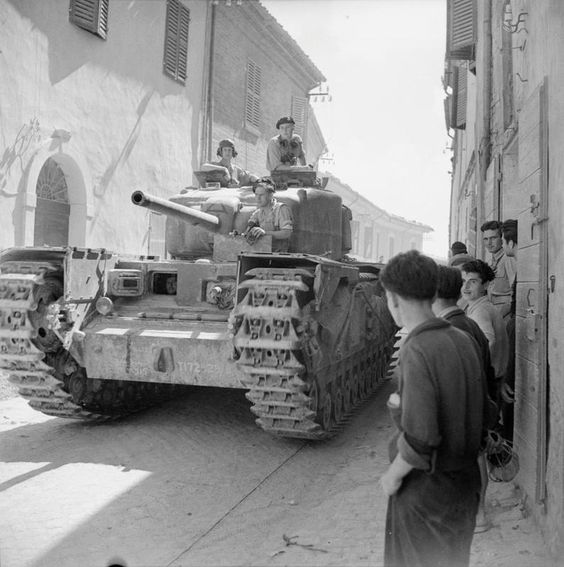 A Churchill NA 75 of the 25th Tank Brigade passes through the narrow streets of Montefiore, 11 September 1944.

Following the success of his upgrades and the flood of praise accompanying it, Captain Morrell was awarded the Military MBE (Member of the Most Excellent Order of the British Empire) and received the promotion to Major.
Despite the lessons learned with the external mantlet, the Churchill would see out its career with its original recessed mantlet design. Had it have gone into service, the Churchill’s intended replacement, the Black Prince, would finally have done away with the recessed mantlet and used an external curved one.
It is not known whether any of the NA 75s survive today, but the vehicles remain a testament to “British Ingenuity”, and one man’s work to improve the fighting capabilities of his army.

Tanks Encyclopedia’s own rendition of the Churchill NA 75 by David Bocquelet. This particular vehicle, “Adventurer”, is from A Company, as represented by the yellow triangle. A box would represent B company, A circle would be C company and a Diamond would be a HQ vehicle.

So whats the difference between the American 75, and the British 75? They sound like they have about the same stats.

Is there really a difference or are they just the same?

They are the same. The British used both the OQF 75mm (rebored 6-pdr) and the Sherman’s M3 cannon, but for the Churchill NA75, only the M3 was used. The OQF 75mm was seen on the Valentine XI at the end of the war, but the 2 cannons are not the same despite people often mixing them up.

Hello Chiyomi,
First, I would like to ask you to be patient. If/when a team member has the time to answer you, he will. However, do note we are in no way obliged to.
Secondly, swearing will in no way be tolerated. This is your only warning.
– TE Moderator

I guess I wont be commenting anytime soon

For what it is worth:
https://en.wikipedia.org/wiki/Ordnance_QF_75_mm
Basically it appears that a British 75 mm was a re-bored 6 pounder. it gave better HE but worse AP capabilities.
Then again I may be off

Chiyomi: When the British decided they needed a 75mm it was required to fit in the 6 pounder mount. Vickers built a 75mm based on the 6 pounder to do that. Given that the rounds were similar in size and the 75mm M3 had much the same bore length it worked. The guns could fire the same loaded round. The British cannon was also lighter; a very little bit shorter (which did not effect ballistics). The 75mm had more recoil but the muzzle brake fixed that. It was a British designed and built weapon. Note that the Churchill NAs used US cannon in the original US 75mm mount and did not need a muzzle brake.
As for power, the US was forced to use the 75 for some time and did well. I would not slight the tank killing capability of the 75mm armed Churchill or Cromwell. Less common, but you will see Tigers knocked out by Cromwell. And Panthers had very thin side armor. Not the best gun, but also not a useless gun.

The US 75 M3 barrel was based on the french Schneider 75 mm barrel, used during the first world war. This barrel was fitted first on M3 Lee/Grant tanks and after on M4 Sherman. So, when GIs went in French North Africa in 1942 (Torch operation), they could use french shells in their tanks.
As said before, the british 75 mm on Cromwell is a Vickers production based on the 6 pounder (57mm) which was re-bored (75 mm Vickers HV).

A small point,but the term”Company” would not be used in a Cavalry Regiment,always “Squadron”