French Morocco and the CAT

On 15th March 1912, following a Franco-German diplomatic standoff and the Treaty of Fez between the French Republic and the Kingdom of Morocco, part of Morocco became a French protectorate, effectively becoming a part of France’s large colonial empire. In the following years, French troops under Gouverneur-général Lyautey occupied Morocco but had to face rather significant local opposition.
Around 1914 or 1915, as Moroccan resistance, emboldened by the Great War, peaked, a French businessman, Jean Mazères, was hired by the French colonial administration to start doing delivery and supply work in Morocco. Mazères had established himself in Rabat shortly before the war to supply his family’s industry with wool. He owned two trucks which were originally meant to be used for his business, but were very much needed by a French army in need of means to supply its troops across the North African protectorate. Throughout the following years, Mazères received more transport missions from the French Army, which convinced him to progressively acquire more vehicles and expand his services to the French Army. By March of 1919, he had become crucial for the French Army in Morocco, to the point where he was given a monopoly on automobile transport in the Protectorate of Morocco.
Mazères finally turned his supplying service for the French Army into a company in 1922, forming the CAT (Compagnie Africaine de Transport – African Transport Company), associating himself with the truck manufacturer Saurer, which would provide the entirety of the CAT’s truck fleet in the following years. Mazères passed away in 1925, but his company remained in business, and as crucial for the French military. In June 1919, two operators of one of Mazères’ trucks were killed by Moroccan nationalists while on a supply mission for the French Army. Throughout the 1920s, attacks on the CAT’s supply convoys intensified, as Morocco underwent a particularly violent era of the Rif War, which, while mostly concentrated in Spanish Morocco, spilled over into the French protectorate too. With nine drivers killed and four others wounded during the decade, the job was particularly dangerous, and the CAT’s convoys were in dire need of military escort. 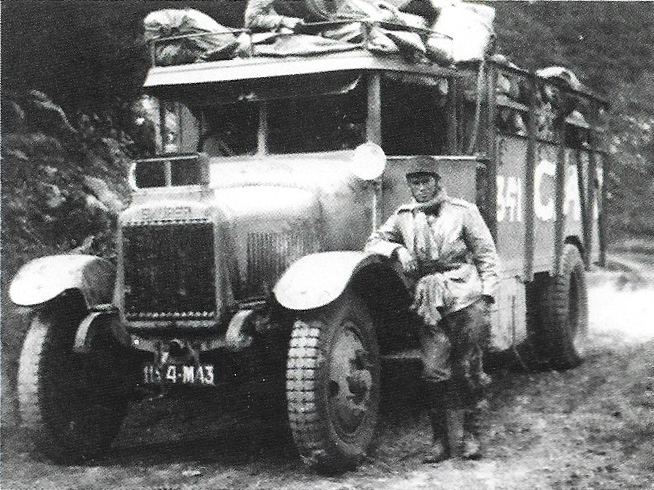 The birth of the “Saurer-CAT”

The CAT’s vehicles were, at first, escorted by the Cavalry Armored Car Squadron of Morocco and the 5th squadron of the 1st REC (Régiment Etranger de Cavalry – Foreign Cavalry Regiment). As the company’s lines continued to expand further into the Sahara and further away from the centers of French activity in Morocco, the needs for escorts rose to the point where the French Army actually gave the CAT responsibility over the escort of its truck convoys. As a consequence of this new mission, the “Saurer-CAT”, an armored car based on the CAT’s Saurer trucks, was born.

Saurer-CAT N°11 and a Renault KZ car of the French Army, ~1930. Pascal Danjou collection.
The earliest photography we have of the Saurer-CAT dates from 1929, which is the commonly assumed date of its entry in service. The vehicle itself uses a Saurer chassis, which actually appears not to have been taken from the company’s 3 AD or 5 AD truck, but to have been purposely-built. Indeed, the GBM magazine (N°119, January of 2017) reports that the vehicle had a 3.70 m wheelbase, which does not match with any known Saurer truck of the era – these had a wheelbase of at least 4 meters. That chassis was fitted with an armored body of unknown thickness, with mostly un-angled, riveted armored plates. On top of that hull, the vehicle was fitted with an octagonal turret that was armed with an 8 mm Hotchkiss mle 1914 machine-gun. It was seemingly powered by a Saurer four-cylinders 6842 cm3 55 hp engine, as found on Saurer 3 AD and 5 AD trucks. 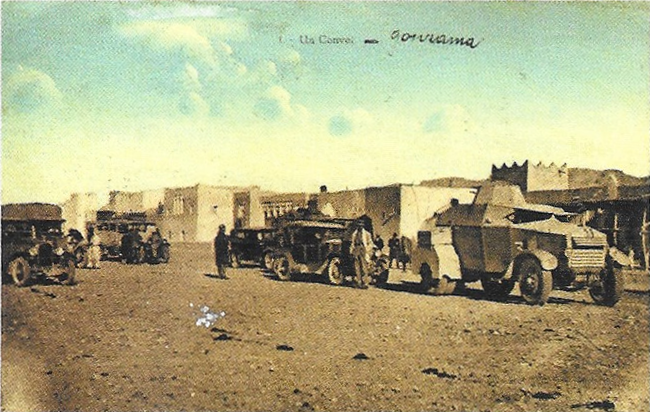 Postcard showing the Saurer-CAT n°3. Pascal Danjou collection
The Saurer-CAT armored car had a rather odd legal status as well as crew composition. While the vehicles themselves were the property of the CAT, the machine-gun was the property of the state. The vehicle’s driver was an employee of the company, but the rest of the crew was composed of French Army soldiers: a commanding non-commissioned officer, a machine-gunner and a spotter. Each vehicle was given a number that was painted on either the turret, the hull, or both. As of today, photos of numbers 3 to 12 have been found, suggesting the existence of at least nine vehicles. There are no known photos of number 1 and 2, and whether or not they were operational vehicles remains unanswered. 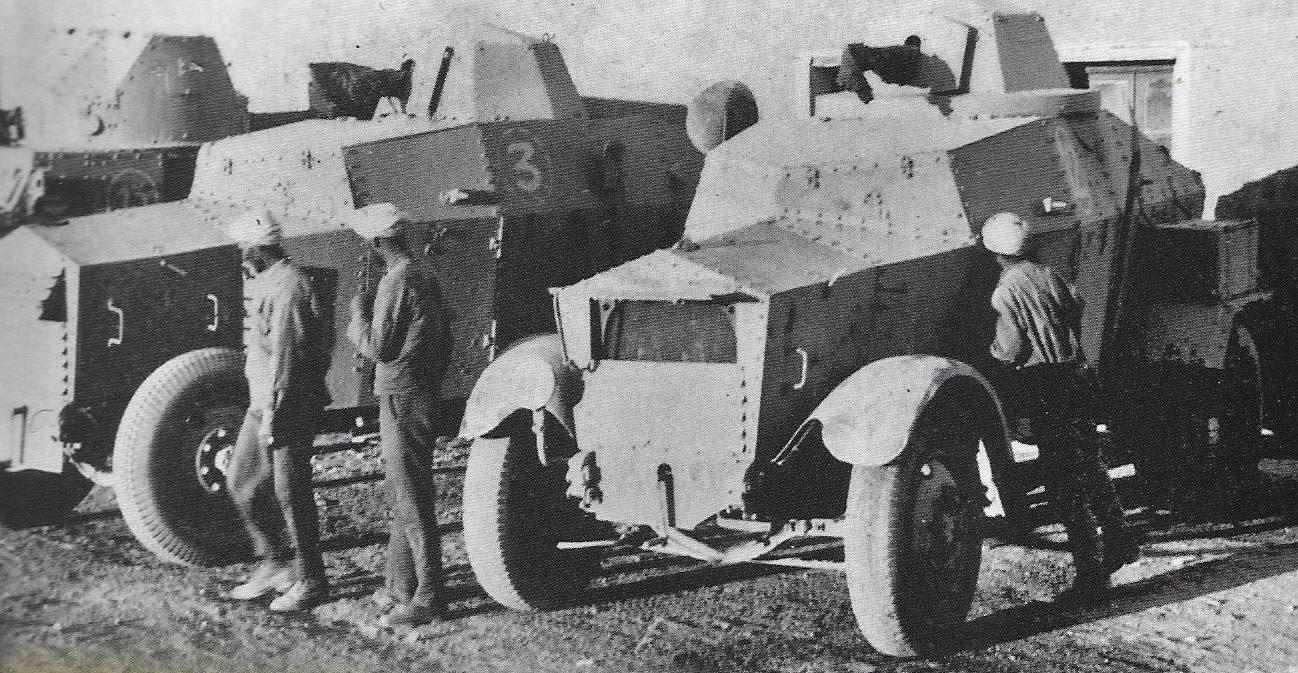 While not based on a pre-existing Saurer chassis, the Saurer-CAT very much looked like a truck having been given an armored body, of which the exact thickness was unknown, though it could not withstand more than an 8 mm bullet. The 55 hp Saurer engine and its radiator, typical of 1920s trucks, was visible at the front. Two headlights were present on the vehicle’s front, attached to its lower body.

Saurer-CAT N°9 at a halt with the armor protecting the read wheel not mounted. Pascal Danjou collection
Further back, in the driver’s post, there were two large vision hatches which the driver could open or close depending on whether or not the vehicle was in combat. While most photos show them opened, at least one exists in which these are closed, the vision of the driver being limited to small vision slots on the vehicle’s sides in such a situation. 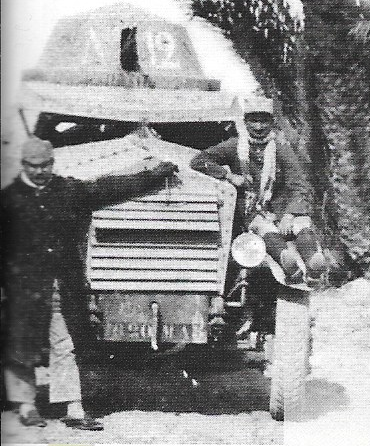 Saurer-CAT n°12, notable for having a circular base for its turret which the other vehicles do not feature, at a halt with the front hatches open, ~1930, Pascal Danjou collection
The small octagonal turret was located in the center of the hull and, despite its seemingly makeshift construction, some of the vehicles did feature a mantlet that surrounded the Hotchkiss 8 mm mle 1914 machine gun, while a number of others simply had the machine gun go through a hole in the turret. The vehicle’s hull featured two side doors around the driver’s position, towards the front of the Saurer-CAT. These did not cover the entirety of the vehicle’s height, only the lower half of the hull. The gunner took position in the turret, and the commander may have sat next to the driver. The spotter took place in the rear, where another hatch could be opened, allowing him to check to the vehicle’s rear. The two rear wheels featured quite large arches, on which a toolbox was mounted. The tires and wheels used appear to have been the same as in the standard truck of the CAT, the Saurer 5AD. At least one photo shows a vehicle with a spare wheel attached to the side of the hull. 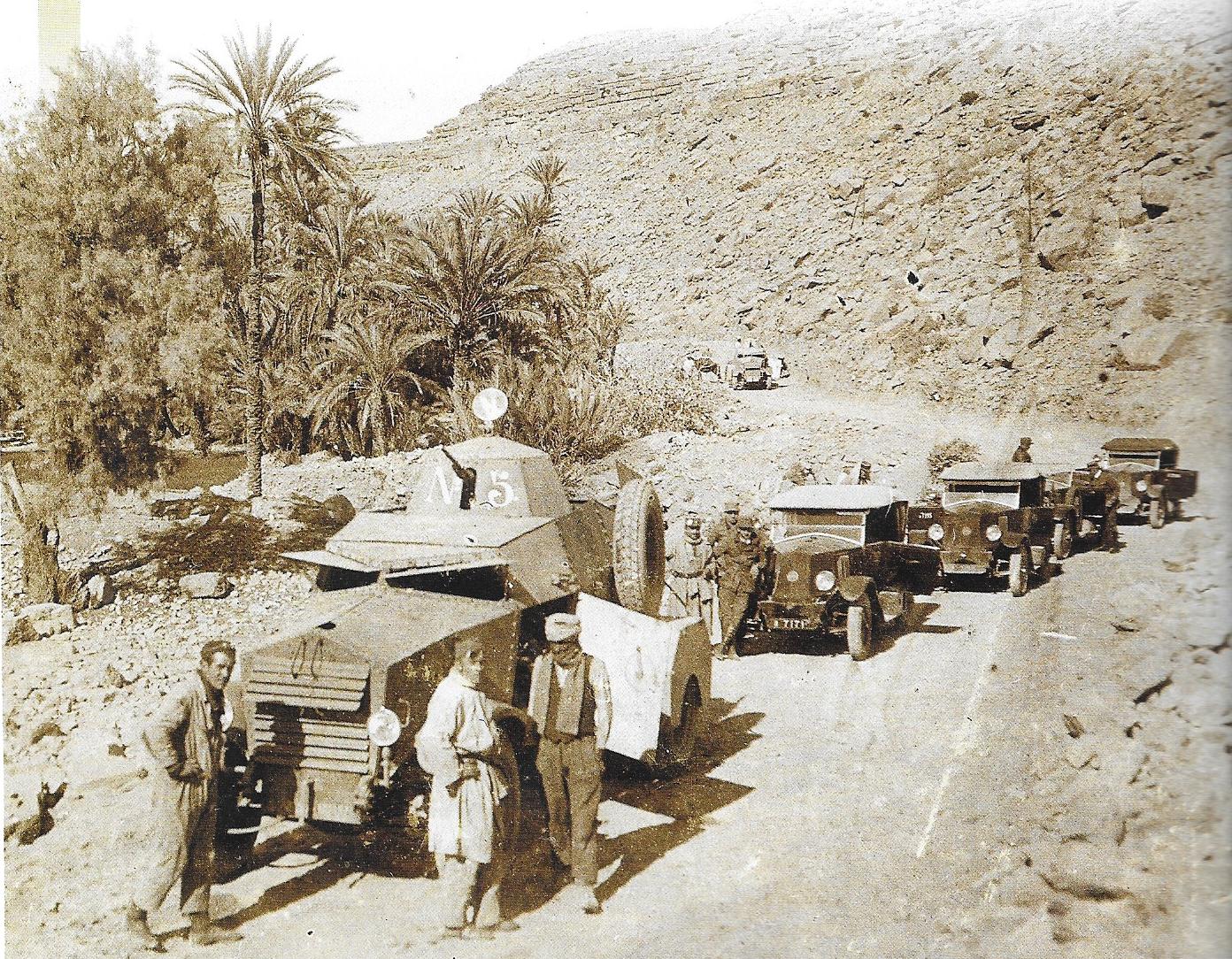 Renault KZs of the French military escorted by two Saurer-Cat in the Middle Atlas. The vehicle leading the convoy, N°5, features a spare wheel on the rear side of the hull. Alain Alvarez collection

The Saurer-CAT armored car with number 7, in service in North Africa. Illustration by Yuvnashva Sharma, funded by our Patreon campaign.

From 1932 onward, a new model of armored car appeared in the CAT’s inventory, the “White-Saurer”. These vehicles were made using the armored body of White armored cars, which, by the early 1930s were beginning to be very worn out, and, if not upgraded to the White-Laffly 50AM or 80AM standard, were often retired. These armored car bodies were fitted on the chassis of the 5AD Saurer truck, as demonstrated by the similar wheelbase of 4.50 m. The original White armored cars were fitted with a turret that mounted a 37 mm SA 18 gun at the front, and a Hotchkiss mle 1914 8 mm machine gun at the rear. On the CAT vehicles, the 37 mm gun was traded for a second Hotchkiss. Five of these “White-Saurer” conversions were made for the CAT in 1932. They operated similarly to the “Saurer-CAT”, with a civilian driver and a three-man military crew. They were also numbered using the same systems, taking numbers 13 to 17.

Saurer-CAT and White-Saurer n°13. This vehicle does not feature the armor that usually protects the rear wheel. Jean-Pierre Decourtil collection

The CAT’s armored car in operation, and their final fate

Saurer-CAT n°7 and two Saurer 5AD trucks during a halt. CBED collection, via Pascal Danjou
The CAT’s armored cars ended up being successful in their intended mission of protecting the CAT’s transport and supply vehicles and crews from attacks. There were no casualties reported in the company’s personnel after the first vehicle entered service in 1929. The two models of armored cars were the property of the CAT and protected its routes until 1934. In February of that year, France officially announced the successful end of its pacification operations in Morocco. Some vehicles at least appear to have then been given to the French army, with at least a “Saurer group” being reported in the 5th squadron of the 1st REC in 1934-1935, and the last known photos of the vehicles in 1935 only showing them with military personnel. 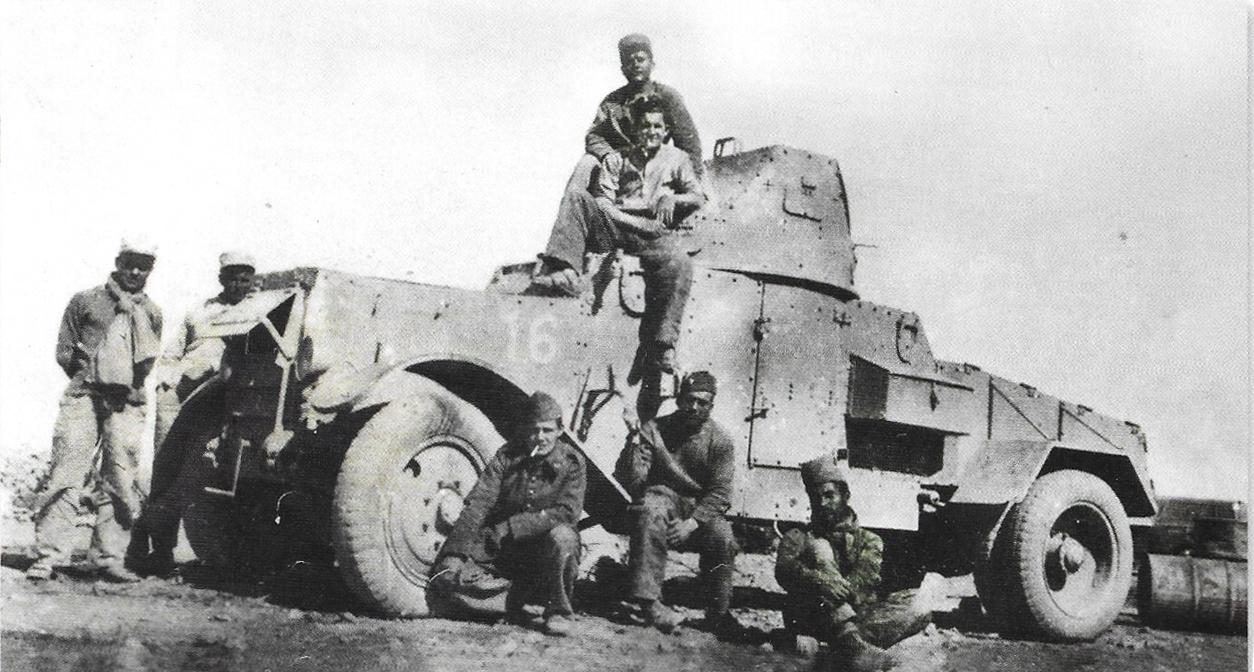 White-Saurer N°16 surrounded by military personnel, 1935. As no civilian personnel or vehicles can be seen, this photo is presumed to be one from the vehicle’s services in the French Army after the end of the pacification of Morocco. Pierre-F Aujas collection.

A Saurer-CAT (in the background), and two unknown vehicles that were supposedly used by the CAT alongside the White-Saurer and Saurer-CATs: In the middle, a vehicle of unknown chassis using the armored body of a WW1-era AMAC Renault-GPAR mle 1914 armored car; in the foreground, a vehicle that uses the armored body of a White armored car, but with a much bigger engine and rear than on the known White-Saurer. The photo being from 1930, it may be a prototype or early model of the White-Saurer. Pascal Danjou collection

One reply on “Saurer CAT and White Saurer”

The “7” should be much thicker – it’s an other font – like No. 3
https://drive.google.com/open?id=1m2MvhZ0_nV1VpC3xSIAePbOO9NowCQE3