Canadian, British and other Commonwealth troops needed protection from air attack from low flying aircraft. This Canadian built SPAAG (Self-Propelled Anti-Aircraft Gun) could provide that support. The Skink could also be used to attack enemy ground targets such as soft transport and lightly armored vehicles. The original program called for production of 135 complete Skink Anti-aircraft Grizzly Tanks for the use of the Canadian Army and an additional 130 Skink Anti-Aircraft Grizzly Tanks to meet British requirements. 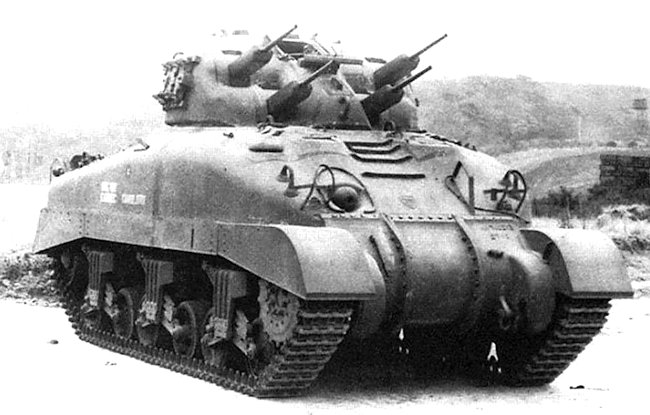 Skink Anti-Aircraft Grizzly Tank (TKC No. SKC 1001 – DND No. 62-727)
The Skink was officially designated the Tank A.A. 20mm Quad. Skink. It was based on a modified Canadian built Grizzly 1 medium tank, a license built M4A1 Sherman tank. It had a modified M4A1 cast turret designed to mount four 20mm Polsten machine guns instead of the standard 75mm main gun and coaxial machine gun.
It was originally designed with Hispano-Suiza guns but the 20mm Polsten cannons were found to be the better option as there were more available. The Hispano-Suiza guns were in high demand for anti-aircraft mounts on Royal Navy ships and for use on RAF airfields. They fired High Explosive Incendiary Tracer (HEIT) rounds as well as Armor Piercing Rounds.
Plans were prepared and a mock-up of this specially designed turret was built at the end of 1943. Specification OA 283 of the final design was issued at the beginning of 1944, and one pilot vehicle was shipped to England.
Allied air supremacy in North West Europe meant that there was no longer any need for this type of vehicle. On 23rd August 1944, the Canadian Department of Munitions and Supply was advised by the Department of National Defence that the program should be cancelled. Only three tanks were produced.
The main difference between Skink and Grizzly tank turrets, apart from the obvious, is that the turret traverse motors were in effect doubled up to increase the speed of the traverse to enable the gunners to follow the enemy aircraft as they zoomed across the sky. The enclosed turret could traverse at 60-degrees per second, a 10-rpm traverse rate.

An M4 Grizzly tank was first produced in Canada in August 1943. The 188 tanks were built using US spare parts at the Montreal Locomotives Factory on the M4A1 chassis. It was fitted with the standard M4A1 turret. Grizzly production was halted when it became apparent that US production of the Sherman tank would be sufficient.
The Grizzly’s suspension used 17-tooth drive sprockets and standard US M4 tracks. In comparison, the US built M4 Sherman tank used 13 tooth drive sprockets. In the 1950’s surviving vehicles were fitted with Canadian Dry Pin (CDP) tracks. These tracks were lighter and simpler than the standard US tracks. 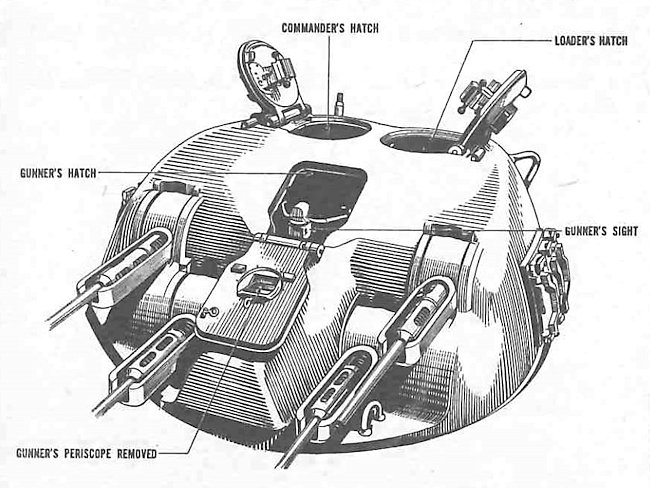 When Germany invaded Poland in 1939 the Polsten design team managed to escape to England. The Polsten 20mm automatic loading cannon was a low cost development of the Swiss made 20mm Oerlikon auto-cannon, that was simpler and much cheaper to build than the original without reducing its effectiveness. The Oerlikon version of the gun was made out of 250 parts: the Polsten was only constructed out of 119 parts. It cost 1/5th of the price to produce.
The Canadian weapons manufacturer John Inglis Limited of Toronto, Ontario manufactured thousands of the 20mm Polsten guns. Over 500 of these weapons were quadruple mounted and saw limited service at the end of WW2. These quadruple racks of 20mm guns were both trailered and truck mounted. Others were fitted in a rack of three for anti-aircraft duty.
They fired High Explosive Incendiary Tracer (HEIT) rounds as well as Armor Piercing rounds. The Polsten 30 round box type magazine was not suitable for use in a quad mount. The 60 round Oerlikon Mk2 drum magazine was used, which weighed 64lb when filled with ammunition. Each 20mm round weighed about half a pound.

The tank version of the quad mounted 20mm Polsten gun used the 60 round drum magazine not the 30 round rectangular magazine. (Skink TM manual)
The 20mm Polsten gun had a rate of fire of 450 rounds per minute and an effective ceiling of 6,630 feet. Its muzzle velocity was 2,725 feet per second. The gun was 84 inches long and the barrel was 57 inches long. The gun weighed 126lb (57kg). 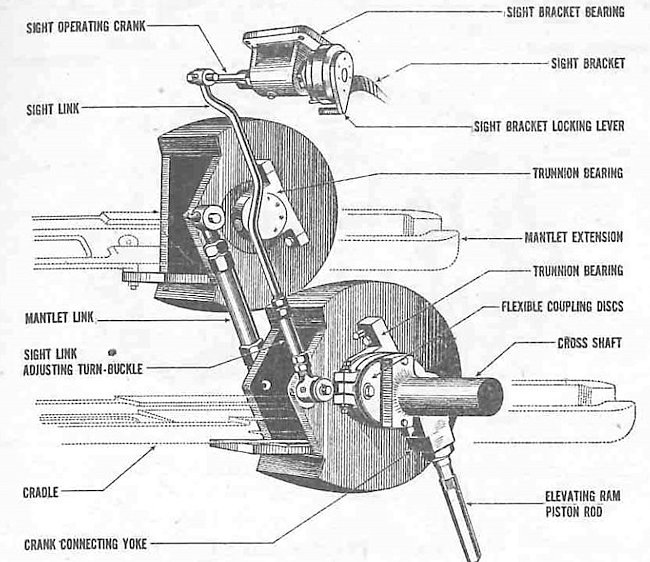 The Skink self propelled anti-aircraft gun. It was based on the Grizzly tank, a Canadian version of the Sherman. Illustration by Jaroslaw Janas 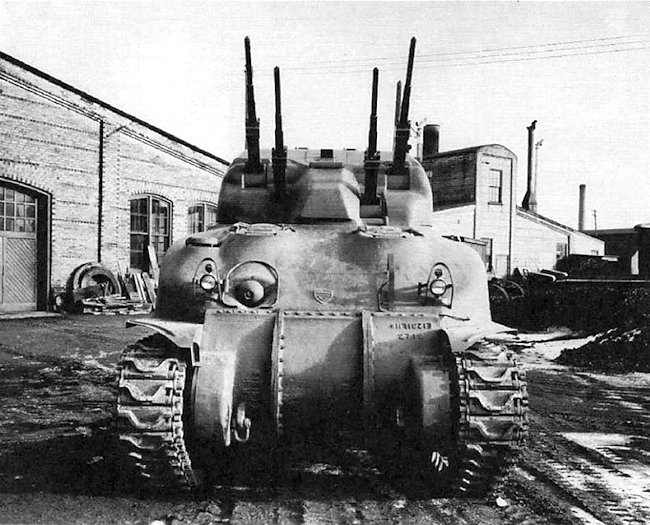 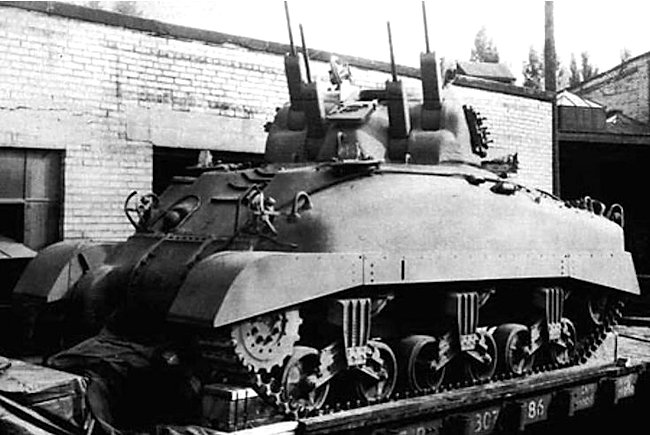 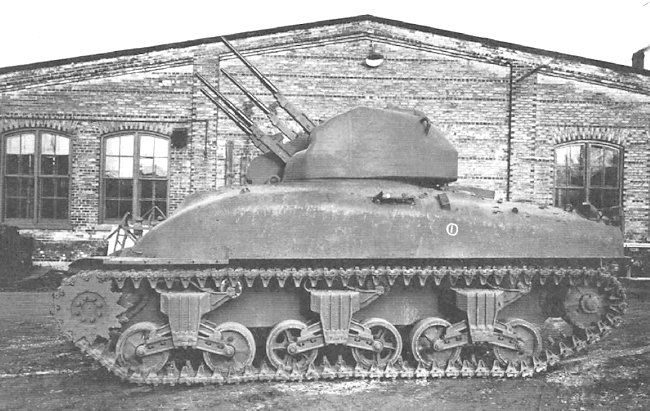 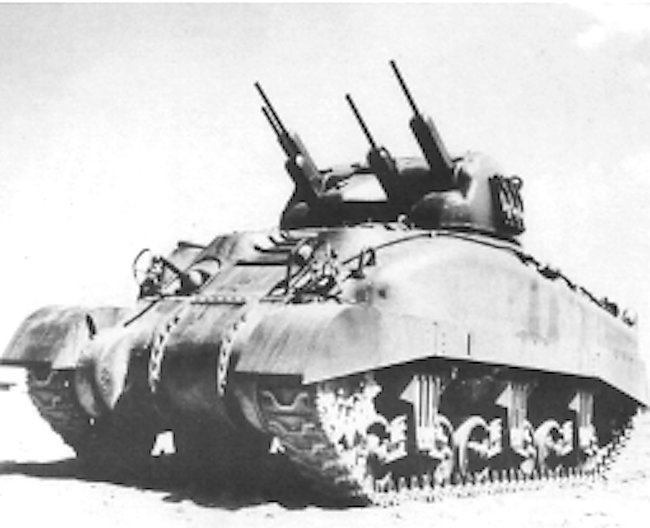 One of the three Skink Anti-aircraft Grizzly Tank prototypes was shipped to Europe in 1945. It was issued to the 6th Canadian Armoured regiment (6CAR/1st Hussars and saw action in an infantry support role near Kalkar. It was then passed to the 22nd Canadian Armoured Regiment (22CAR/Canadian Grenadier Guards) in the Battle of Hochwald gap.
In late 1944, the Allies dominated the sky above the battlefields, so the requirement for an armored tracked anti-aircraft tank to accompany Armoured Divisions as they advanced towards and later into Germany had significantly been reduced.
There is photographic evidence that at least one Skink was converted into a turret-less Kangaroo armored personnel carrier (APC) and ended up in Portugal. In the photograph shown below the splash guards on the glacis between the drivers hoods and the catches outside of the drivers sides have been altered to allow the driver and co driver hoods to fold flat. This was unique to the Skink Anti-Aircraft version of the Grizzly tank. Unfortunately, this historic vehicle was cut up for scrap metal. The Canadian Government and RCAC were informed about its location prior to it being scrapped but they were not interested in buying it back so it was lost for ever. 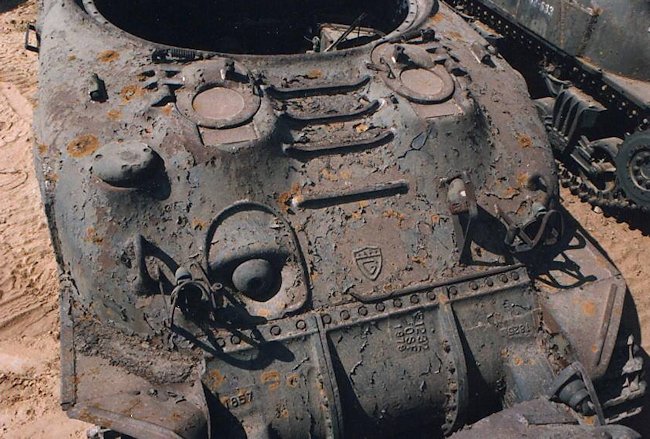 Skink Anti-aircraft Grizzly Tank chassis converted to a Kangaroo APC. Note the splash guards on the glacis between the driver’s hoods and the catches outside of the driver’s sides have been altered to allow the driver and co driver hoods to fold flat This was unique to the Skink Anti-Aircraft version of the Grizzly tank. (Photo – Luis Costa)
The third Skink Anti-aircraft 20mm Polsten tank stayed in Canada. After the war it was on display at the Dennison Armouries in Toronto, Canada. It is not known at present what its final fate was. It may have been used as a ‘hard target’ on firing ranges or just cut up for scrap. It is believed that there were another 6-8 Skink cast turrets in various states of finish, made before the order was canceled in August 1944. It is believed than most of them went to ranges to be used as targets. 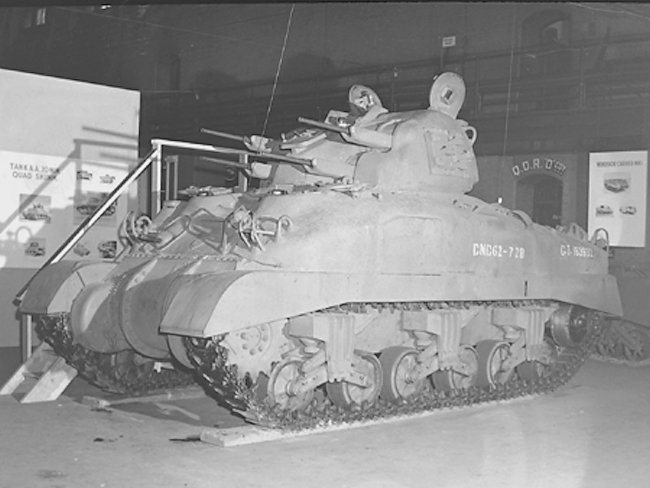 Dear Sir,
I hope the illustrations by Jarolaw Janas are only a stop gap solution as your original art work is far better.
Yours sincerely,
Arlo Werkhoven

I agree, that looks pretty bad. Not what I’m used to seeing here at all.
Good article though, I really didn’t know much about this SPAA.

Some of the guns, most notably on the first image on the right, seem to be longer than in the other pictures- is it possible that Hispano cannons or Browning machine guns were experimented with?
Great article as always!
-Will

The skink turret was originally designed to use the Hispano variant of the 20mm, and that is indeed what you are seeing. It was later ordered to use the polsten guns on the production model which delayed production.

Did the US ever build a armored AA vehicle in ww2? Cant find any.

It depends on what you mean by ‘armored’. They did build a number of AA vehicles on the M2 and M3 Half-track chassis (such as the M14, M15, M16) and these vehicles were lightly armoured against small arms fire and shrapnel. If you’re referring to AA vehicles built on a tank chassis then those did exist too however in significantly fewer numbers. There were some experimental 20mm and 40mm AA vehicles on the M5 light tank chassis, which eventually evolved into the 40mm armed M19 built on the chassis of the M24 light tank (entered production in 1944) and seeing limited service late in the war
TE Moderator

Plenty of AA Half-tracks. And plenty of tracked and wheeled prototypes.
You can see some of the AA Half-tracks here
https://www.tanks-encyclopedia.com/ww2/US/M3_Halftrack.php

Oh Man! I absolutely adore this tank. Great little article! You did a fantastic job.

What are those rungs on the upper plate/roof between the driver and BOG/AD hatches? Steps? I’m trying to find an excuse to add ribbed armor in a WW2 style story. If those rungs are thick steel sticking straight up like they seem, I’d love to know as much about them as I can.