Although the Matilda II could negotiate a wide variety of jungle undergrowth, even toppling trees when the need arose, conditions in the Pacific were not ideal for tanks and some areas were still considered impassable to them. The Japanese took advantage of the rough terrain across several engagements with Australian tanks by establishing ambushes or mining the only viable routes for tanks to take or, alternatively, retreating to positions where it was simply impossible for the tanks to attack.
To cope with the terrain, a close association between the tank forces and Australian engineer units had been established since the Huon campaign of 1943. The engineering squads made wide use of commercial bulldozers to fill shell holes, clear Japanese roadblocks and level heavier sections of jungle to create new routes for the Matilda II tanks to outflank Japanese positions. Additionally, the bulldozers were used as recovery vehicles to extract bogged Matilda II tanks, although the bulldozers didn’t always have it their own way and, in some cases, the tanks had to return the favor and unbog the dozers! 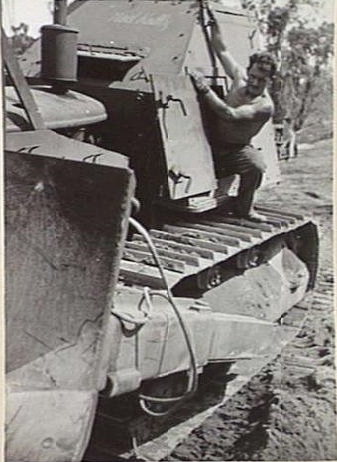 Armored bulldozer undergoing tests at Bougainville, May 26, 1945 – Source: Australian War Memorial 092587
As effective as the bulldozers were, they still had substantial limitations. While a lack of speed was not a problem in the sluggish jungle battles of the Pacific theater, the commercial bulldozers were not designed for military needs and left the operators exposed to enemy fire while lacking any defensive armament of their own. In 1945, tests were conducted on bulldozers equipped with locally produced armored cabs, but these proved unsatisfactory. Subsequently, a bulldozer blade mounting for the Matilda II tank was developed. It allowed engineering work to be conducted in situations where the vehicles were under fire. This gave greater tactical mobility to the tank units. 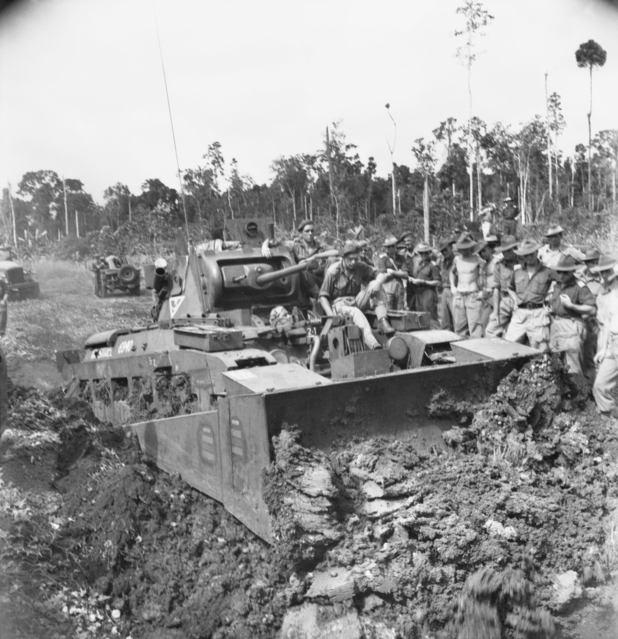 Tank number 6940 (‘Minstrel’) Matilda Dozer Number 1 Mark I displaying its capabilities at Morotai, 9 June 1945 – Source: Australian War Memorial 109011
The first type, officially named the Dozer Matilda (Aust) No.1 mark I, was developed in early 1945 and tested on Morotai Island in June of 1945. The No. 1 dozer kit consisted of a Caterpillar D7 dozer blade with single push arms, mounted on pivots attached to the tank below the second mudchute. The height of the blade was controlled by a cable winch attached to the frontal glacis and powered by a re-purposed Jeep engine.

Illustration of the Matilda Dozer by David Bocquelet
The No. 2 mark I and No. 3 mark I kits instead used hydraulic power to control the height of the blade. Power for the hydraulics were provided by a re-purposed Jeep engine in the No. 2 kit and drew power directly from the main drive shaft via a sprocket and chain linkage in the No. 3 kit. Additionally the No. 3 kit used a locally manufactured Britstand blade, fitted to the tank at the same point as the D7 blade on the No. 1 kit. The No.2 kit was superseded by the superior arrangement of the hydraulic power source in the No.3 kit. This resulted in the cancellation of the order for the No.2 type pilot model in June of 1945. As such, no examples of the Number 2 Mark I type were manufactured.
In order to control the height of the blade the No. 3 kit had two large metal cams attached to the push arms, above the blade mounting pivots. These cams were triangular shaped pivoting structures that changed the pushing motion of the hydraulics into a lifting motion on the dozer blade arms. The cams were actuated by a pair of hydraulic rams mounted on the front track guards protected by armored covers. The hydraulics were driven by a pump mounted inside the tank and linked to the rams by pressure lines running through the driver’s vision port. This arrangement meant that the diver’s viewport could not be closed, however, the presence of the dozer blade would have offered adequate protection in action. Unlike the No. 1, the No. 3 could raise the blade substantially higher which allowed the driver greater visibility and allowed for better obstacle crossing. However, at full elevation, the blade blocked the use of the turret armaments. 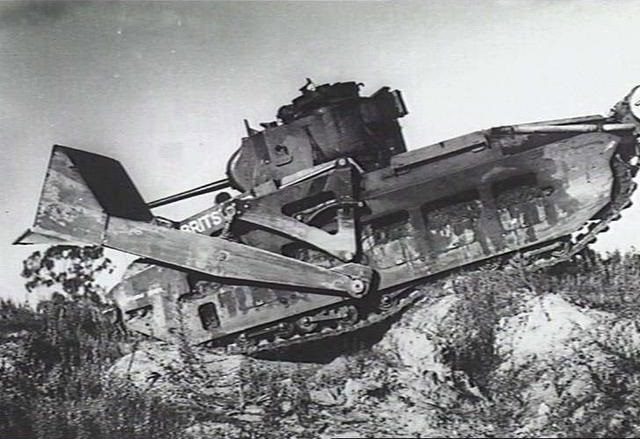 Matilda Dozer Number 3 Mark I traversing obstacles on trials. The Britstand logo can be partially seen on the cover of the hydraulic ram – Source: Australian War Memorial 133689
Matilda Dozers, a mixture of No.1 and No.3 kits, were deployed by Nos. 3 and 4 troop of the 2/1 Australian Armoured Brigade reconnaissance (recce) Squadron at Borneo during the Oboe series of operations in 1945. In action, the Dozer kits were found to be less than effective with the additional weight frontloading the suspension and hindering steering. The No. 1 equipped tanks were also found to be unable to elevate the blade sufficiently, which caused issues where the blade was unable to be elevated clear of low obstacles due to sinkage of the suspension on soft ground. Subsequently, the Dozer blades were removed and the tanks continued as gun tanks until the conclusion of the war. 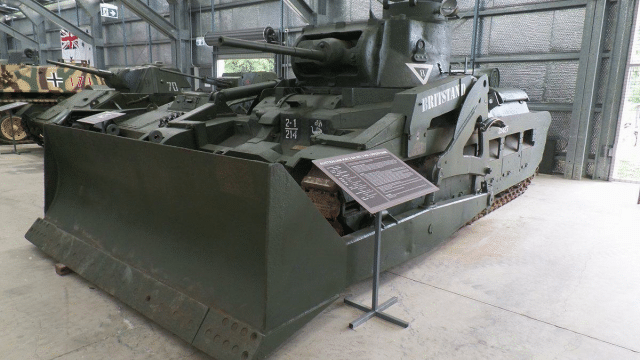 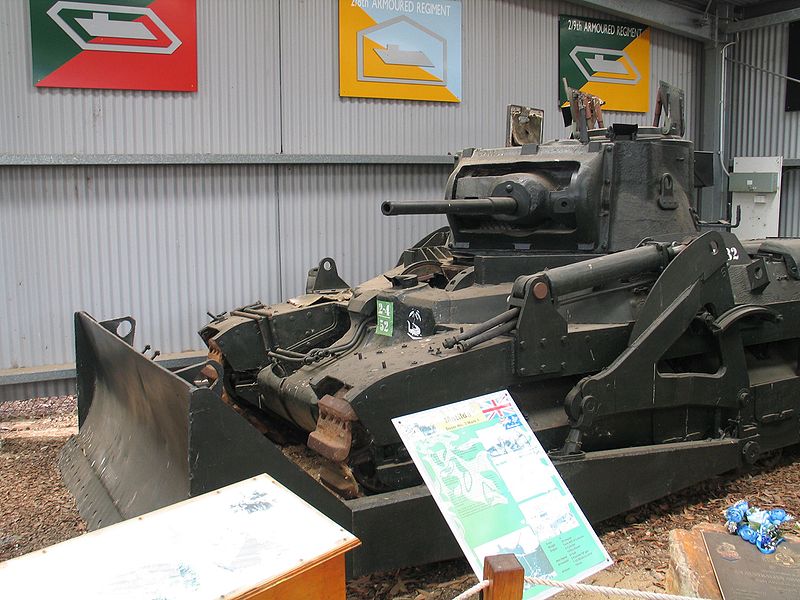 The Number 3 Mark 1 Dozer tank on display at the RAAC museum, Puckapunyal, Victoria. Note that this tank is missing the armoured covers on the hydraulic rams and some of the hydraulic lines have been disconnected. Source: Bukvoed

Were the bulldozers all unprotected until the Matilda dozer came, or were there “make-do” armor kits applied in the meantime?
Pretty brave of those bulldozer drivers to go out unprotected like that!

Armoured crew cabs for the Bulldozers were tested but proved unsatisfactory due to insufficient ventilation and poor visibility for the driver.
You are correct in assuming that the bulldozers were unarmoured until the tank dozers arrived, and that the men driving them certainly took a risk.
However it is important to remember that for the most part the bulldozers were not front-line vehicles, their main job consisted of clearing area and earthwork engineering for camps, and maintaining the newly built dirt roads that linked the main advance to the various supply dumps and landing sites etc. Usually they were only called up to the front line to help recover bogged vehicles or perform essential earthworks before returning to the second lines. This was one of the main reasons why a tank dozer was considered desirable, because it could conduct work while under fire and was also immediately available to the tank unit instead of having to wait while a bulldozer was brought up from the rear

welcome to australia, were everything needs to push stuff