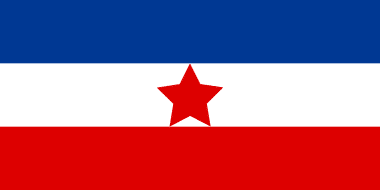 The Axis invasion (codenamed ‘Directive 25’) of the Kingdom of Yugoslavia started on the 6th of April 1941 (also known as the ‘April War’). The Yugoslav Army was taken completely by surprise by the speed and size of the Axis forces. The war ended on the 17th of April 1941 with the capitulation, occupation, and division of Yugoslav territory by the Axis forces.
However, very soon after the Axis occupation, in the second half of 1941, the first resistance groups started a rebellion against the occupiers. There were two resistance fighters groups, the Royalist Chetniks (Četnici/Четници) and the communist Partisans (Партизани). The Chetniks were led by General Draža Mihailović (Дража Михаиловић) and the communist Partisans movement was led by Josif Broz Tito (Јосиф Броз Тито). The term ‘Partisan’ describes both groups by definition, but today the name Partisans has become a synonym for the communist resistance movement in Yugoslavia.
Although in the beginning, these two groups worked together in the fight against the occupying Axis forces, a conflict between these two forces in late 1941 would break out into an open civil war. This lasted until the end of the war and the victory of the Partisans.
By the end of 1943 and early 1944, because of the lack of Chetnik actions against the Germans, the Allies decided to send large amounts of military aid to the Partisan movement instead, including weapons, tanks, and aircraft. According to the agreement between the Partisans and the Allies, it was planned to form one tank brigade equipped with Allied fighting vehicles (armored cars and tanks). 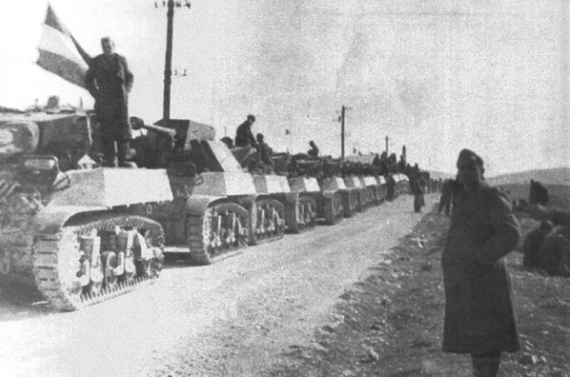 A column of Partisan M3A3s. A PaK armed one can be seen just behind the leading vehicle. Photo: SOURCE
This unit, named the First Tank Brigade, was formed on the 16th of July 1944. The British provided all the equipment needed to equip this brigade. In its inventory, there were some 56 M3A1/A3 Stuart tanks, 24 AEC Mk.II armored cars, and two M3A1 armored reconnaissance cars. The next larger delivery of 36 mostly M3A1 tanks would take place on the 6th of March 1945 (plus a few Stuart tanks received during the war from the Allies) so that the total numbers of Stuart tanks used is around 100.
The caliber (37mm) of the main gun on the Stuart M3A1/A3 tanks was inadequate for anti-tank duties in 1944/45, but Stuarts were still used, since most German tanks on this front were older (mostly Italian and French models). There was also nothing better available at that time, partly because there were not enough Soviet-supplied weapons. The Partisans, as a result, were forced to use the AEC Mk.II armored car (due to its better firepower, the 6 pounder – 57mm Anti-Tank Gun) for engaging better and stronger enemy tanks in mix units together with Stuart tanks.
But this tactic of using both vehicles types for fighting enemy armor led to a lack of any reconnaissance (vehicle or infantry) element of the brigade. The inability to determine exact information about the enemy forces, in particular, unit strength and exact positions, led to great losses.
By the end of the War, more than 60 Stuart tanks were destroyed or damaged. On several of these damaged tanks, the turrets were removed and Partisan engineers decided to try to mount some captured German weapons, to be used as improvised self-propelled guns with increased firepower. Two confirmed modifications are known; one armed with a German 7.5cm PaK 40 anti-tank gun and the second armed with the 20mm Flak 38 Flakvierling anti-aircraft gun. These modifications were quickly built and put into use without proper testing.
There is also no information about the exact names for these vehicles, or whether the Partisans even assigned an official name for them. 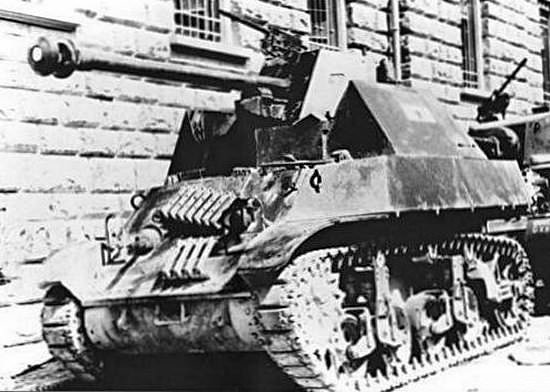 Front view of the modified tank. This one is armed with a second Browning machinegun placed above the gun shield or behind it. Photo: SOURCE

On some damaged tanks, the tank turret was removed and in its place, a new modified gun platform was fitted. The upper structure mounted the 7.5cm PaK 40 anti-tank gun with its twin layer gun shield of 4mm (0.16 in.) thick steel and a small armor plate (there is no information on its thickness) between the gun and the tank hull. Two more armored plates were used for the side protection (taken from damaged German Sd.Kfz.251 or 250 half-tracks). In principle, the armor of the upper modified gun platform offered only limited protection for its crew, mostly from small caliber bullets and shrapnel.
The main armament, as previously noted, was the 7.5cm Pak 40 anti-tank. The choice for the main gun was very simple one, as the Partisans captured a number of these guns, so they used what they had. The exact number of rounds for the main gun is not known, but it is often mentioned as being around 25 rounds. The 7.5cm Pak 40 gun had enough power to destroy nearly all types of enemy tanks that could be encountered on this front. These being the German Panzer IV or some captured Russian T-34/76 (known as “Panthers” by the Partisans) in Germans use.
The secondary armament consisted of one original hull mounted Browning 7.62mm (.30 cal) machinegun. On some photographs, a second Browning machine gun can be seen placed on top of the gun shield or behind it, but the photographs are not clear enough.
Due to the removal of the tank turret and installation of the new 7.5cm PaK 40 anti-tank gun, it was necessary to do some modifications on the two roof hatch doors (used by the driver and hull machine gunner) so that they could be opened forwards only. Except for the change in the upper structure of the tank, the rest of the vehicle was the same as the original (hull, running gear, armor, and engine).
The dimensions of this vehicle were similar to the original tank configuration. Due to the length of the 7.5cm Pak 40 gun, it was certainly a bit longer than the original but the exact details are unknown. The weight of this vehicle was probably around some 15 to 17 tons. It had four crew members: commander, driver, gunner, and a loader. The gun crew had a very limited working space to effectively operate the main weapon.

Illustration of the Light Tank M3A3 With 7.5 cm PaK 40 by tank encyclopedia’s own David Bocquelet

There is little information on the precise participation and loses of the Partisan Stuart PaK version. What is known from the contemporary photographic evidence is that they were used in combat. There are only a few documented actions in which these tanks were used. 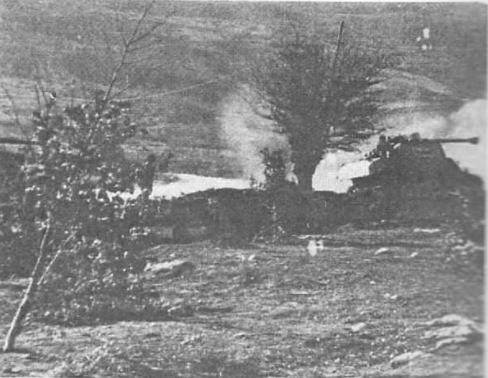 The PaK armed M3A3 in action somewhere in Yugoslavia. Exact date and location unknown.
They were used at the end of March 1945 in the area of Drenovača (Дреновача) against German positions. Then, on the 27th and 28th of April 1945, near Ilirska Bistrica (Илирска Бистрица), after some heavy fighting (between the Partisan and German forces), the Germans managed to push the Partisans out of Bistrice. This was with the support of one armored company equipped with several or more ‘Panther’ tanks (in reality captured and reused Russian T-34/76 tanks), The next day, Partisans carried out a counter-attack and on that occasion, one T-34/76 was hit and destroyed by a Stuart PaK version. They also took part in tough battles for the liberation of the Trieste (Трст) by the end of April 1945.
The final fate of Pak version is not known, whether they were lost in combat or if they survived. Тhe First Tank Brigade war losses were as previously noted, around 30 to 34 tanks destroyed and a similar number of damaged tanks. So it’s possible that in these numbers include some Pak-conversion tanks.
The role of this vehicle was very likely primarily for destroying enemy heavy armor and as a long-range fire support in a way similar to some German armored vehicles. We can conclude that this hybrid vehicle had both good and bad sides. The positive side was the superior firepower compared to the original and weaker cannon 37mm main gun. Negative sides were: limited working space for the gun crew, weak armor, limited ammunition storage, unproven designed and the whole new gun platform was very likely to stressful for the whole chassis. 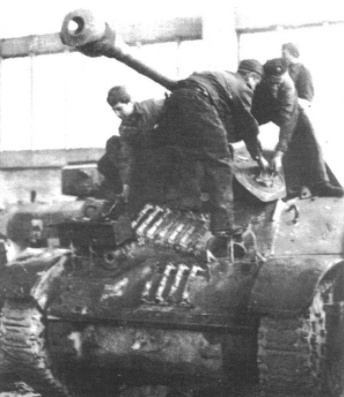 It is believed three Stuart tanks were modified, but according to other sources (mostly on different internet websites) up to 5 vehicles were rebuilt this way, but this is probably not correct. What is particularly strange is that this conversion always appears alone in contemporary photographs, so it possible that only a single vehicle conversion was ever carried out. Currently, it cannot be exactly verified how many such vehicles were built. Their final fate after the war is unknown.

The 7.5cm PaK 40 was a Rheinmetall solution for the German problems with their insufficiently strong anti-tank guns. It was first issued in very limited numbers by the end 1941 and start of 1942. It became the standard and a highly effective German anti-tank gun used until the end of the war, with some 20,000 examples being built.
The Pak 40 was in essence just a larger version of the 5 cm Pak 38. It had a split tubular trail carriage, double plate shield (two 4mm plates 25mm apart) to protect the crew, solid rubber tires with a torsion-bar suspension, and a muzzle-brake on the long gun barrel. It was an excellent anti-tank gun, but the main problem with it (according to many sources) was the heavyweight in action, many were lost because they became bogged down in mud, especially on the East Front. After the war, many European countries put them to good use to re-equip their shattered armies for some time.
The maximum effective range of Armor Piercing (AP) rounds was 2 km and for High Explosive (HE) rounds was 7.6 km (4.72 miles). Elevation was -5° to +22° with 65° traverse. Weight in action: 1425 kg /3142 lb. The armor penetration at a range of 1 km (0.62 miles), depending on the ammunition used was around 97 mm which was enough to destroy almost every tank of the period at that range.
The Pak 40 used several different types of ammunition:
– 7.5cm Pzgr Patr 39: Conventional piercing shell (AP) with ballistic and penetrating caps. Complete round weight of 12 kg (26.46 lb),
– 7.5cm Sprg Patr 34: Standard high explosive shell (HE) Complete round weight of 9.15 kg (20.18 lb),
– 7.5cm Patr H1/B: Complete round weight of 8 kg (17.64 lb), Hollow charge shell used in limited number because the low muzzle velocity (450 mps/1476 fps) made precise and accurate shooting at fast targets very difficult.

That’s quite clever idea from them.

Another clever variation of a very impressive yet under appreciated at times tank, the M3 Stuart! Great article as always. – Emile

This conversion is similar to German conversion of first Marders II 38t with Russian F-22 76.2mm AT gun

An M3A3 Stuart would not be able to support the firepower of a Pak 40 well enough for the tank to actually be effective.