In 1943, the Standard Oil Company, based in Indiana, was one of the main companies charged with designing tank-based, or ‘Mechanized’ flamethrowers. Earlier in the year, in January, they had successfully tested their E7-7 model. This was a modified Light Tank M5A1 with the 37mm gun exchanged for a flame projector.

In April, Standard Oil was contracted to develop another tank based flamethrower. This time it would take the ‘Auxiliary’ form. Simply, this means that the flamethrower is secondary to the main gun, and does not replace it. This is unlike the ‘Main Armament’ flamethrowers, such as the M3A1 Satan or E7-7’s, which replaced the main gun.

This new flame thrower would be designated the E9-9 (this was the combination of the E9 Fuel system and E9 flame gun). The vehicle would follow the same designation, being called the E9-9 Mechanized Flame Thrower. It is sometimes known as the ‘Indiana-Merz E9’, though what ‘Merz’ relates to is unknown.

The M5 was the last in the lineage of light tanks which had followed the same design since the Combat Car M1 which entered service in 1935. Entering service in 1942, the M5 was designed to replace the now aging M3. It was originally going to be designated the M4, but to avoid confusion with the Medium Tank it was changed to M5.

Overall the design was similar. It shared the same vertical volute spring suspension (VVSS) and 37mm gun main armament. The real differences lay with the hull design and engine. The hull was a completely different design but followed elements used on the M3A3. Gone was the stepped armor layout at the front of the tank. It was replaced by a large sloped plate, granting more effective protection.

The aim of the E9 program was to produce a tank-based flame thrower with a large fuel capacity, a projection range of 200 yards (183 metres) and that would not reduce the M5A1’s original firepower. To achieve this, all the flame thrower equipment, such as the fuel tanks and propellent gas bottles, were placed in a trailer that was towed by the tank. The only part of the system installed on the tank itself was the flame projector, mounted on the front of the tank. This configuration is similar to the famous Churchill Crocodile and lesser-known Sherman Crocodile. Both of these flame throwing tanks kept all of their fuel and gas load in a towed, wheeled trailer.

By comparison with the trailers of its Crocodilian cousins, the E9’s was extremely large. It was approximately the same height and width as the tank itself. In this 12 ton trailer, there was a 1200 US gallon (5455 litre) armored steel tank. This would be filled with 800 US gallons (3637 litres) of flame fuel. The 400 US gallon (1818 litre) void that was left was employed as an air cushion. There were two air-compressors in the trailer which provided 800 psi from a bottle above the fuel tank.

The trailer was attached to the rear of the M5 via a 10-inch (254mm) diameter ball-and-socket joint. The joint granted the trailer the ability to turn 105-degrees left or right from the center line. The fuel line which fed the projector passed through this ball joint. In an emergency, the trailer could be jettisoned. Valves in the piping would close upon this action to prevent fuel from the tank spilling.

The flame projector was mounted in between the drive sprockets at the front of the tank. It was operated by the bow machine gunner/assistant driver through a series of pulleys and cables. The flame gun could traverse 60-degrees left and right, and elevate +30 to -15 degrees.

The E9 was a duplex flame gun, meaning it had two nozzles side by side. One nozzle was ¼ inch (6.35 mm) in diameter, the other was ¾ inches (19.05mm) in diameter. The thinner nozzle was tighter, this granted a higher pressure thus providing greater range. The wider nozzle did the opposite and provided a wider field of fire at closer ranges.

The E9-9 project would come to a deadly end, meaning tests would never be completed. During a live fire trial on the 29th of May 1944, 500 US gallons (2273 liters) of Napalm thickened gasoline was provided and prepared in the trailer’s fuel tank. The tank was pressurized to 500 psi. During a fire test, one of the air compressors failed. Shortly after this, the main fuel tank exploded ripping the trailer apart and engulfing the M5 in flames. The incident was fatal, resulting in the death of all four tank crew. This catastrophe brought about an abrupt end to the E9-9 project, with all work halting. As a result, none of the E9 equipment survives today. 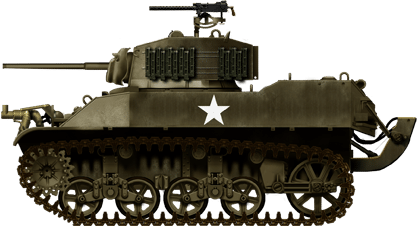 Such a sad story 🙁

The training accident showed what the Achilles heel of the E9-9 – the enemy only needed to hit the trailer to start a catastrophic explosion/fire, rather than trying to disable the tank itself.