By the early 1920’s, the British Government’s enthusiasm for a state tank program had collapsed following the unsuccessful ‘Medium Mark D’. This project had eaten up the majority of the Government Tank Design Bureau’s budget and the widely overambitious model had been horribly unreliable. The exit of Winston Churchill from the Ministry of Munitions in 1921 was a key turning point in the downfall of publicly owned tank design in the United Kingdom. Military spending was falling as the troubled post First World War UK economy improved little in the 20’s and colonial duties bit away at what money there was, while the defense sector was slipping back into a conservative and skeptical stance. Within two years, the funding stopped coming and the nation that had invented the tank now left tank development to the private corporations.
Fortunately, the Vickers Company (that would become Vickers Armstrong in 1927) had begun competing with the Government over a contract for a replacement tank for the infantry in 1920. At the time the Mark D fell through in 1923, several prototypes of what would become the Mark I Medium had already been produced. The Mark I and Mark II vehicles produced throughout the 1920’s were indeed substantial improvements over the World War 1 era vehicles still in service. They replaced the last MK.V Heavies and Whippets as the 1920’s closed, being the only tanks mass produced in this period anywhere in the world, with a total run of just under 300 vehicles.

The previous Mk.II model on the left with the Mk.III on the right. Photo: Tank Archives Blogspot
These tanks incorporated a rotating turret and were more mobile that preceding tanks. While now it may seem trivial, this represented a leap in design with the three-man turret. This took the workload off the commander and main gunner (who in most vehicles of other tank building nations during the Interwar period were the same person) and would likely have had a serious positive influence in combat.
Despite these relative innovations, the vehicles had serious flaws. Some were quickly recognized others were not. Already in 1926, requests for an improved vehicle came from the War Office. The Mk.I’s and II’s had proved difficult to drive, and their top speed of only 15 mph (24kph), while meeting the requirement for a tank that was designed to primarily operate alongside infantry, still left something to be desired. While they were not mechanically as gremlin ridden as First World War vehicles, a number of improvements were suggested to make a more reliable vehicle. What may also have been more apparent to some military staff was that the mere 6mm of armor protecting these vehicles, which was less even than the Mk.I Heavies of 1916, would struggle to deflect even small arms fire at close range. More than twice this thickness was needed for a vehicle to reliably protect against even standard issue infantry weapons at close range. By September 1926, Vickers, requirements in hand, went to work.

Initial Design, the A6

A weight limit of 15.5 tons was set for the new vehicles, so that they could be supported by the standard British Army pontoon bridge of the day. Easy rail transport, space for a wireless radio set, and (relatively) quiet running mostly for the benefit of crew wellbeing were also essentials. Later, easier steering ability and better protection were also requested. The initial design submitted by Vickers Armstrong was named the A6, and based loosely on the A1E1 Independent, which was still in testing at the time. One fad that this monstrosity briefly inspired was that of the multi-turreted tank. The A6 design featured the same QF 3-pounder gun as the Mark I and II, but it was housed in a two-man turret, accompanied by three secondary machine-gun turrets. One was at the rear with an anti-aircraft machine gun mount and two at the front of the vehicle with two machine guns in each, although later this was reduced to one in each. The A6 had 13mm of armor at the front and 7mm elsewhere. This kept the weight down to around 14 tons and it was estimated a 180hp Armstrong engine would propel the vehicle at 20 mph (32kph) on road.
In 1927, after the wooden mock-up was approved, the prototype was ordered, fitted with a new hydraulic ’Wilson Epicyclic’ steering gearbox. The three prototypes that were produced were fitted with the Armstrong V8 engines which exceeded expectations, and gave the vehicle a top speed of 26 mph, positively rapid for an interwar vehicle. Unsurprisingly, the machine gun arrangement was not well received on trials in 1928, and the vehicle was not judged to be far enough superior to the Mark II to warrant a serious production order.

Determined to salvage the project, Vickers Armstrong ordered an improved vehicle in 1928, with two being built at the Woolwich Royal Ordnance Factory and another at Vickers. These featured slightly better armor, 14mm at the front and 9mm around, as well as a new turret capable of housing a radio set. The rear machine gun turret was abandoned, while the other two were shifted forwards to improve weight distribution. Better brakes were also fitted. From 1930 to 1933, further trials were far more positive. The vehicle was deemed more reliable, offered greater crew comfort and provided a more stable platform for the 3 pounder gun that the Mark I and II. Additionally, the top speed had further improved to a highly respectable 30 mph (48kph).
For all their work, the suspension proved somewhat overladen and the track components fast wearing out when used off-road. Finally, the 3 finished vehicles were purchased for use by the Royal Tank Corps and in 1933, entered service as HQ tanks. However, the high cost of the eight-year project more than outweighed its technical improvements, and no further orders were made. By the mid-30’s, British tank doctrine was moving on, and the Medium tank had no place in it. A Soviet purchasing commission came to look at British vehicles for export in 1930 and purchased a number of British tankettes and light tanks. At the same time, it appeared that, through the use of some skulduggery, they obtained fairly detailed information on the A1E1 prototype and Vickers Mark III. After an investigation, a British Officer was court-martialed in 1933 for selling the plans on. It is sometimes claimed that the Mark III provided some design inspiration for the T-28 Medium Tank, of which more than 500 were produced and fought in the Winter War and opening stages of Barbarossa.

The Mk.III on the left with the similar A1E1 Independent on the right. Note that they both share the void in the sides designed for the placement of a stretcher to evacuate wounded crew. Photo: IWM

Illustration of the Vickers Medium Mk.III by Tank Enyclopedia’s own David Bocquelet

The last vehicle of the batch, ‘Medium III E3’, was used as a command vehicle for one of the largest combined arms training exercises of the era. On Salisbury Plain in 1934, this vehicle was used alongside other experimental armored and mechanized forces in the British Army, to test their potential and help find their role within the army in future conflicts. 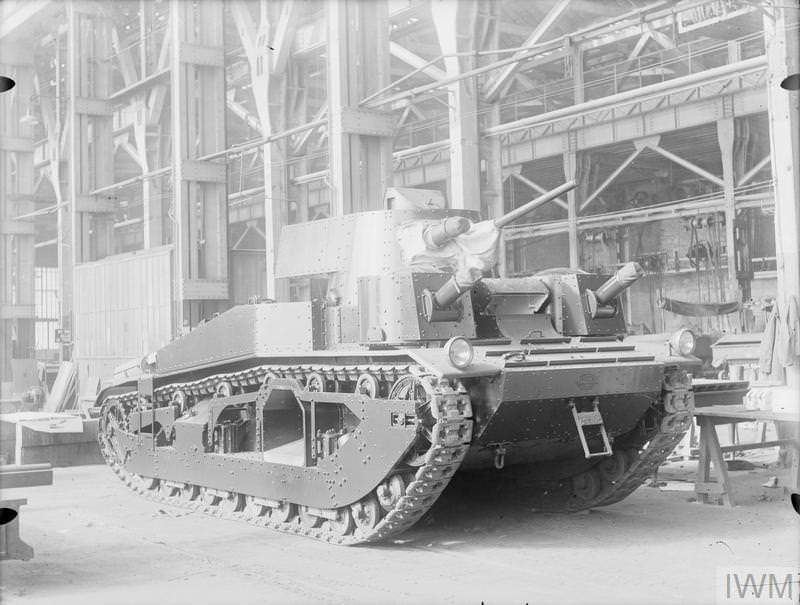 A factory-fresh Mk.III. Photo: IWM
Ironically, the exercise this vehicle was used in would hurt British tank progress in the short term. The results were skewed by conservative officers who played down the role of the tanks in the exercise, an example of the disruption British tank design in the 1930’s faced. Some historians in the postwar era such as that of author and expert David Fletcher have gone so far as to suggest that these traditionalists, who were resistant to new practices in the army, used their positions to prevent the implementation of new tactics and equipment. They are accused of a ‘Great Tank Scandal’ which put Britain on the back foot of tank design as it entered World War Two.
The one silver lining for the participating Mark III, however, was that it was crewed by Brigadier General Percy Hobart, later ‘Sir’ Percy Hobart. He was an armor development expert who takes credit for designing some of the specialised tanks used for the D-Day landings that began the liberation of France in 1944. Perhaps some of his inspiration came from the ponderous tank he commanded around the training field on its only active duty in 1934. Shortly after the exercise, the participating vehicle was written off, another was destroyed in a fire, and the sole survivor remained in service around the training ground until 1938, and was likely scrapped some time within the next two years. Hence, sadly, none of the vehicles have survived to this day. 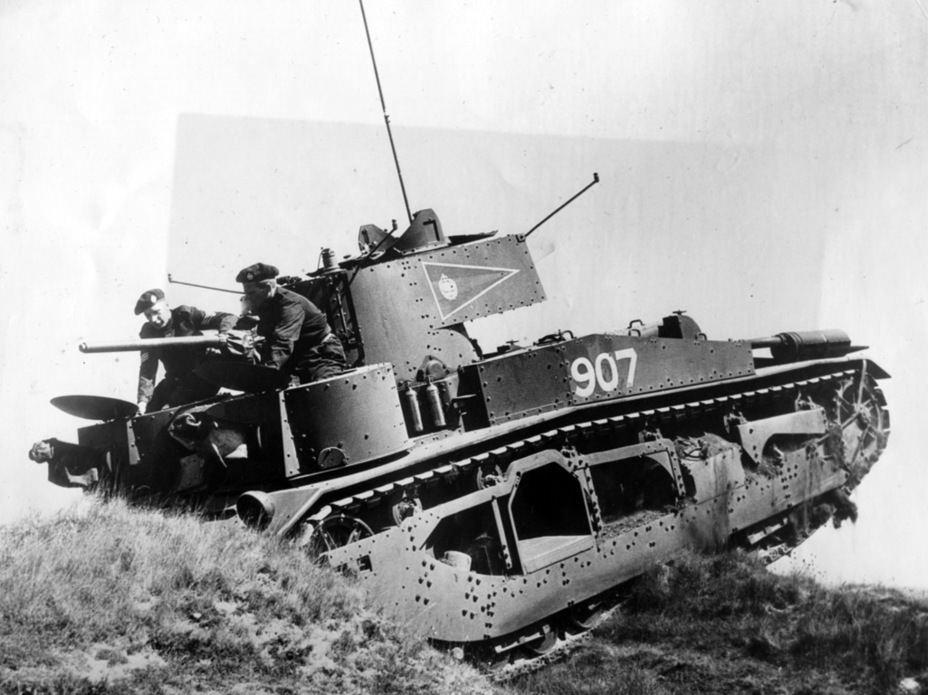 On the training ground towards the end of its service in 1938. Photo: Tank Archives Blogspot

An article by Will Hardwick

The issue is fixed.
– TE Moderator

Thanks Will Hardwick! The walls in the living room are Benjamin Moore Sonnet. A lovely soft neutral.

Thanks. Still got nothing. I’ll keep checking.

My Grandfather was probably the tank commander of the 2nd MK3, E2 (mil’ reg MT9708) when it caught exploded & caught fire in Sep’ 1934 near Swindon.
I have a photo of him riding on it too.

Email with pics sent.
Feel free to use as you see fit.