Daimler’s great brother of the Dingo

The Daimler Dingo was arguably the most successful British reconnaissance armored car of World War Two, to the point of being copied by the Italians (Breda Lince). However, the company that built it, Birmingham Small Arms design was already working on a parallel project. This was a scaled-up version, better armed with the turret developed for the Mark VII Light Tank. It was mass-produced from 1941 to the end of the war, declined into three versions and served well until the late 1960s in India.

Development of the Daimler AC

This model incorporated many advanced design concepts for the time and was considered as one of the best British AFVs of the Second World War. Its use was considered complementary to the lighter Dingo with reconnaissance units, mostly to bring fire support in cases of bad encounters. The hull was strongly related to the Dingo, entirely welded with some bolted elements. Prototypes were ready in 1939 but problems with the complex transmission and amplified by the added weight of the vehicle delayed it entering service well until mid-1941. In total, 2,694 such armored cars would be built by Daimler. Most were sold after a long service in the British inventory (1960). They saw action with other countries afterward. The hull was made of welded steel. The sides were sloped in order to better deflect bullets (16 mm thick at the front, 6 mm elsewhere). There was a small cabin-like compartment for the driver at the front, complete with two side sight slits and a front armored shutter. The commander and gunner took place inside the cramped turret, just large enough to allow the recoil of the light 2-pounder gun (40 mm), the standard British antitank gun of the time. The turret roof had a large opening hatch, folding to the rear. There were some additional storage racks and fittings on the hull for jerrycans, toolboxes, and spades.
The rounds were small but muzzle velocity was excellent and at least did the job well until 1942. Later in the war in Europe, the Littlejohn adaptor was tried to add some muzzle velocity and hitting power against German tanks. Other than the main gun, there was a coaxial 0.3 in Besa machine gun, left to the gun, and also a roof provision for a pintle mount for a light AA Bren machine gun. 52 2-pdr shells and 2500 rounds for the Besa LMG were carried inside. The Daimler 27 4.1 liter 6-cylinder petrol engine gave 95 hp (71 kW) for a power to weight ratio of 12.5 hp/tonne. Daimler Mark I
The rear 95 hp engine was connected to a Wilson preselector gearbox through a fluid flywheel and then by prop shafts to each wheel. The four wheel steering was similar to early models of the Dingo, but following early experience with the scout car, and added weight, entirely rethought.
The Daimler also featured a fully independent suspension and four-wheel drive. The epicyclic gearing in the wheel hubs enabled a very low ratio in bottom gear. It was credited with managing 1:2 inclines. The rugged nature of the terrain combined with this mechanical reliability made it ideal for reconnaissance and escort work. This was compounded by large, well-spaced roadwheels that gave it excellent ground clearance. Spare side roadwheels also acted as additional armor, although blocking the lower slope escape hatches in case the vehicle was toppled over.

Just like the Dingo, the Daimler AC was extensively used in North Africa, notably with the 11th Hussars and Derbyshire Yeomanry. Others saw action in Europe. Late war reconnaissance squadrons in NW Europe generally comprised two Daimler Armoured Cars and two Dingo scout cars. Some received a Littlejohn adaptor for their 2 pounder gun. This device worked on the squeeze bore principle to increase the gun’s theoretical armor penetration.
A few served in the Asiatic theater, like the 16th Light Cavalry British Indian Army armored car regiment (part of Fourteenth Army troops) in the reconquest of Burma.
Postwar use was extensive, as Daimlers were used by the territorial units of the British Army until the 1960s, well outlasting the Coventry Armoured Car. The 11th Hussars, B Squadron, deployed them in Northern Ireland as late as January 1960. Also postwar, the 63th Cavalry Indian Army regiment used this model for one of its squadrons, later reformed as an independent reconnaissance squadron and, later updated to the integral squadron. Some formed the mounts of the President’s Bodyguard. They served in the defense of Chushul at heights above 14,000 ft during the 1962 Indo-China War.
Post-war service of the Daimler AC also included the Korean War, Vietnam War, 1948 Arab–Israeli War, Indo-Pakistani War, Ceylonese insurrection of 1971 and Sri Lankan civil war. This vehicle was used post war by no less than eleven countries, Australia, Belgium, Canada, India, Israel, Malaysia, New Zealand, Qatar, Sri Lanka, United Kingdom, and Poland. 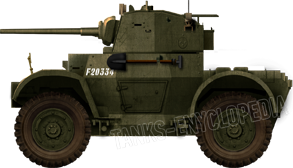 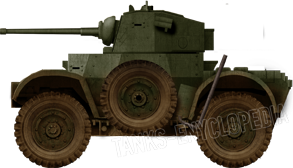 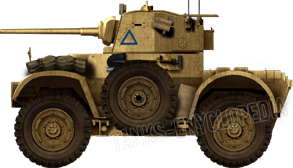 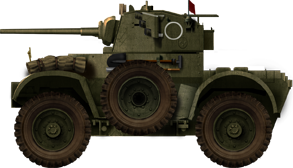 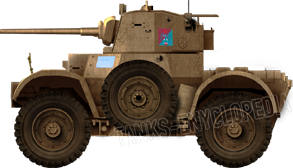 Daimler Armoured Car visual references from around the web A Daimler Mk.II at the Kubinka Tank Museum Side view of a Daimler Mk.II A Daimler Armoured Car Mk.I at the Bovington Tank Museum

Beautiful, as always. I don’t remember, was the historical footage inhere before, or is that the new addition?

Thanks !
The historical footage is not TE’s own video, and was added in the article as one of the most interesting

Nitpicking I know, but info I’ve seen says that there was only 1 spare wheel carried, on the left hand side and therefore blocking that hatch. Please see the last paragraph on page 2 of Daimler Armoured Car Design and Development, at
http://www.daimler-fighting-vehicles.co.uk/develop%20daca.html
and also the official Armoured Car Data Sheets at the same site.
This is an excellent site, by the way, and my “go to” site for AFV info. Keep up the good work!