Why did this project exist?

In the very early stages of WW2, there were many good, and probably more not-so-good-but-well-meaning ideas to bolster the British war effort against the Nazis. The War had not gone well for Great Britain up to that point, the entire British Expeditionary Force (B.E.F.) had been forced out of continental Europe meaning that Britain had lost almost all of its best tanks. Tank production was vital and the nation was very short of tanks of such weapons. Add to this the very real fear of a pending German invasion of the British mainland from across the channel and there was a significant effort to convert peace-time industries to wartime production. Pipe makers became gun barrel makers, boilermakers and train builders started building tanks, and many firms were investigating ways of weaponizing vehicles already in production.
The county of Lincolnshire was a significant industrial hub in Great Britain and a generation beforehand had birthed the modern tank from the firm of William Foster and Co. It was a neighboring firm, however, Ruston-Bucyrus, who in this period came up with one of the more unusual ‘tank’ ideas. Ruston-Bucyrus (‘Ruston’s) had been formed in 1930 by the merger of the Lincolnshire firm of Ruston and Hornby (who had already had some experience with track laying vehicles in WW1 during the development of early British tanks) and the American firm of Bucyrus-Erie of Bucyrus, of Ohio. Ruston’s specialized in tracked earthmoving and excavation vehicles and even ‘walking machines’ moving on large feet. They, like many other firms across the country, had already received limited contracts to assist in Cruiser tank production in 1940. Obviously, with a specialization in a different type of tracked vehicles, Ruston’s sought to use their own expertise to convert their 10-RB grab cranes into military vehicles. 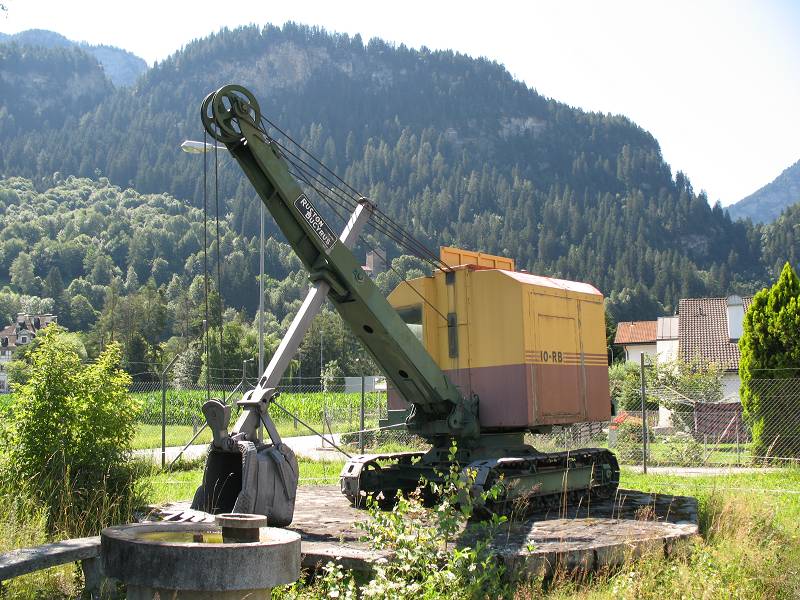 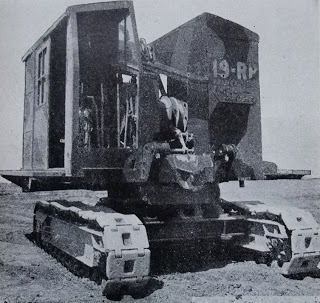 The 10-RB was a sturdy design and was actually still in production into the 1960’s and, like its slightly larger cousins, the 19-RB, 22-RB, and 37-RB, was already in limited use by the British military for earth moving duties. At least five 10-RB’s were already in use for example with No.2 Section 135th Mechanical Engineers in the construction of the GHQ Defence Line through Essex in June 1940.
The 10-RB and 19-RB, in particular, were very useful due to their small size making haulage by truck from site to site very easy although a special trailer was also available. The 22-RB and 37-RB machines were much larger and harder to transport. The 10-RB was just 9 tons (including crane boom) and was mechanically simple but was slow with a top speed of just 2.5 miles per hour (4 km/h) in top gear and 0.8 miles per hour (1.3 km/h) in low gear. This was not a hindrance on a building site but was not ideal for a military vehicle.

The special RB transport trailer in use for hauling RB cranes. Photo: pillboxesinsuffolk 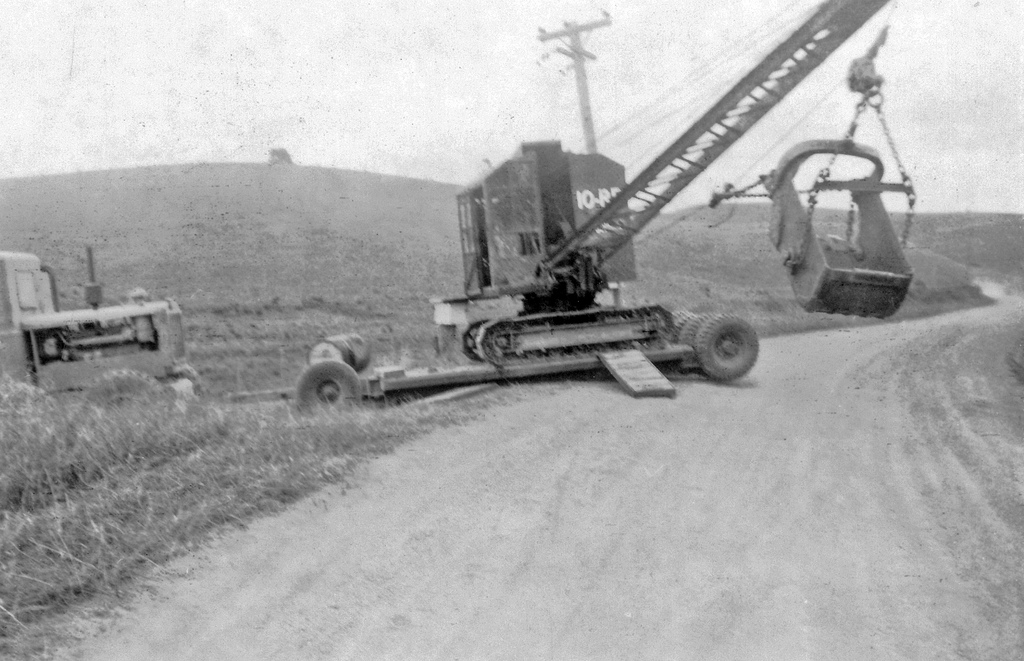 The Chief Engineer at Ruston-Bucyrus was a man named Bill Savage and he led the project to create a vehicle for military purposes, appointing their lead designer, Fred Stratton to prepare a prototype using an old rusty 10-RB from their own yard. This vehicle was already well used as for years it had simply been used for moving scrap metal onto rail cars. The project goal was to convert this machine into a military vehicle capable of carrying a field gun. By October 1940, the outline had been drawn up for the plan for what is effectively just an armored box on the crawler body with a field gun poking out of the front. 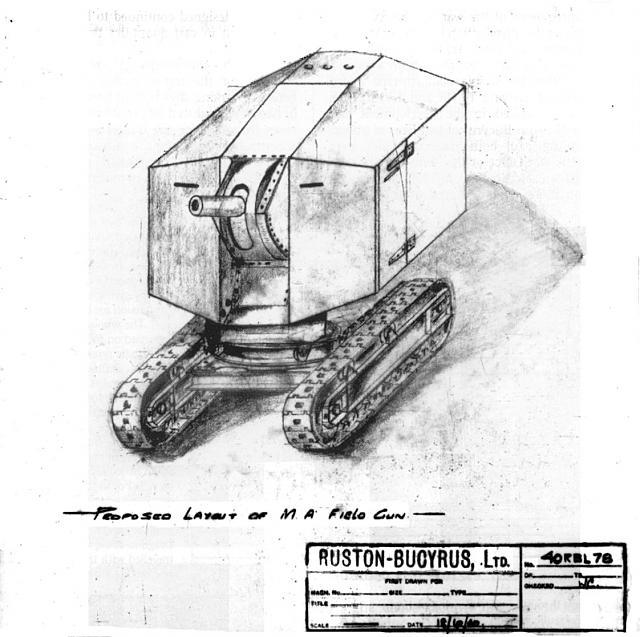 Unlike British tanks of 1940, this design was not going to be a bolted body but instead would be fully welded. The slow speed of the 10-RB both in moving and the ‘slewing’ of the cab (the rotation speed) was significantly improved by the designers adjusting the gear ratios within the machine without changing the small electrically started 3VRON diesel engine it was using. It is not known if thought was given to substituting this small 33hp diesel unit with the larger 55hp unit from the 19-RB or not but this would have involved changing the starter from electrical to compressed air and the fitting of a small petrol donkey engine to the machine in order to fulfill that.
These mechanical adjustments to the gearing were very successful, perhaps too successful as the machine went from being capable of just 2.5 miles per hour to 15 miles per hour. Vehicles of this type have no suspension to speak of as they don’t need it for the speeds they are doing. At 15 mph though, in a vehicle with no suspension, being driven perched in a large box on top of the track which the driver would be unable to see beneath him appears to have been terrifying as an idea. This centrally-rotating cab design with the engine in the rear of the cab is a normal set-up for a machine of this type and was even known as the ‘Lincoln cab.’ 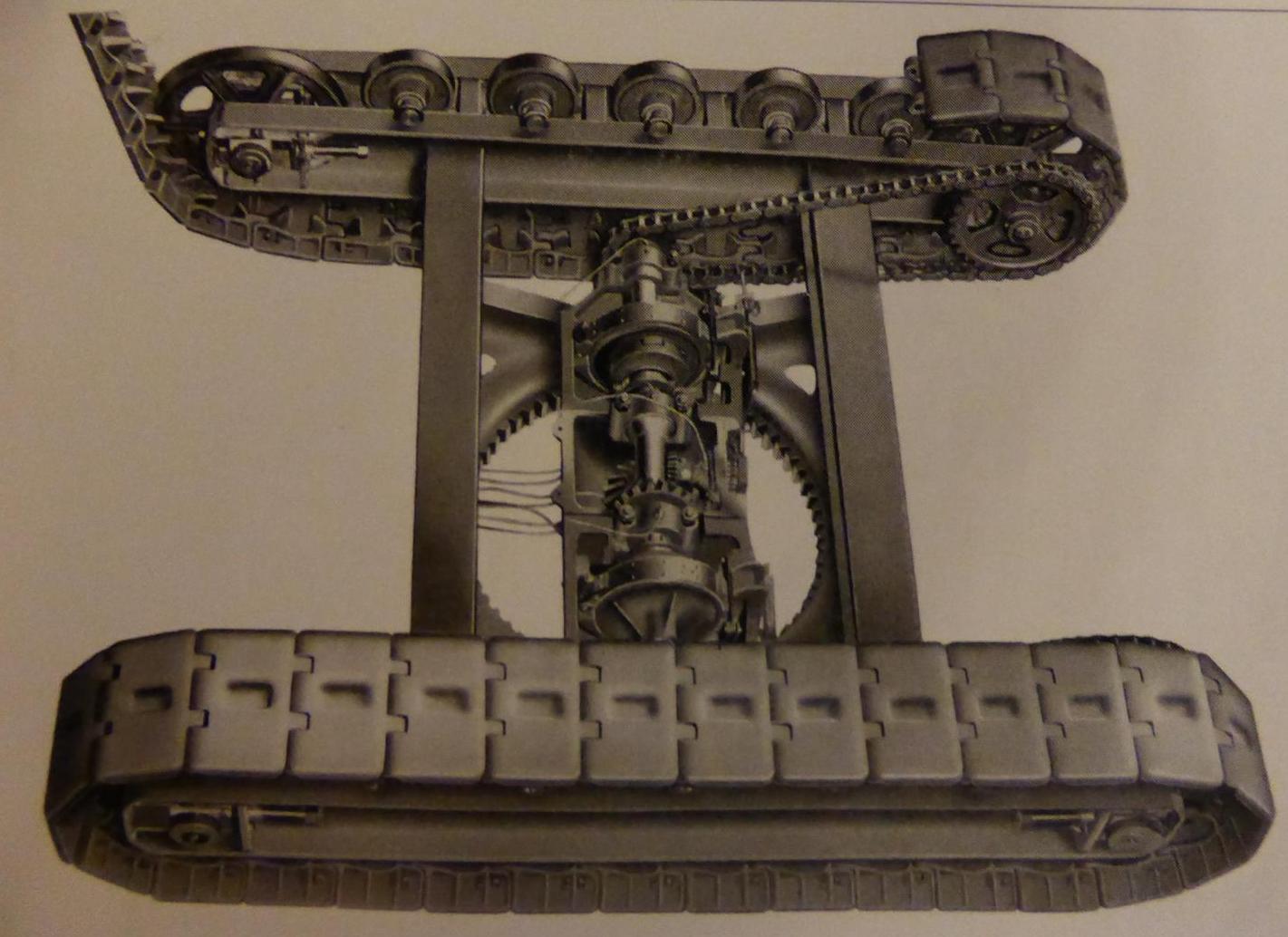 Seen from the underside this is the chassis of the 10-RB crane on which the 40RBL78 MA was planned. 5 small rollers on each side with a chain direct driven sprocket with drive coming from the gearing system under the cab ring. The simplicity of the framework design is apparent.
It is unsurprising that this prototype machine now with its 15mph top speed was described as “virtually unsteerable” as well as being dangerous to bystanders. Fitting the weight of the armored body, crew, gun, and ammunition would not have made this machine any less dangerous to drive as it would have raised the center of gravity and made her unstable on any side slope.
The armor was not specified but the role was as an armored field gun carrying machine but bullet-proof plate would be expected in the region of 10mm thick. The field gun to be carried is also not specified but it likely would be a standard field piece. No specifications exist for the depression or elevation of the gun but the only known drawing of it clearly shows a very wide field of movement above and below the zero degree (horizontal) line.
The cab itself is a large welded box with the gun mounted forward and central. No details of crew layout are known but if it were to retain the driver control from the 10-RB, which would be probable, then the driver would sit in the front on the right with the remaining crew elsewhere. Considering the need for ammunition stowage there would likely not be room for more than 4 crew including the driver and even then would be cramped.
Unusually for a military vehicle, the ‘turret’ was not mounted in a conventional type turret ring as with conventional tanks but instead with the weight of the whole unit borne onto a series of rollers running around the turret. This system was common in cranes and was similar to the system used in some the TOG (The Old Gang) vehicles. Visibility would be poor as only 4 vision slits (2 front and one in each large side access door) are visible. No door could be provided in the back as the engine was in the rear of the cab. No self-defense weapon appears to have been provided for either.

Despite the potential to produce this vehicle cheaply compared to tank based systems this concept was one of the first British ideas for a fully enclosed self-propelled gun predating the development of the Bishop self-propelled gun. The concept was never progressed and the 10-RB prototype was returned to its former duties “to the dismay of those drivers who thereafter had to negotiate the concrete loading ramp with this errant machine.” The machine presumably lived out its usefulness there until it too was scrapped and forgotten. By the middle of 1941, the Bishop SPG project was underway and there was, therefore, a better means of moving an enclosed field gun on track.
The 40RBL78 idea should be remembered not as a dangerous or crazy idea but rather as one of the numerous, novel, and inventive ideas, from skilled engineers, determined to put their knowledge to use to defend their nation from the Nazis.

There is very little information on the internet about early war British SPG’s so thank you for this article.

Interesting. Had the Germans invaded the UK mainland this could have been a nasty surprise for the invaders. Retain the shovel and boom to disguise from air recon. When enemy tanks or infantry advance lower the shovel boom, expose the cannon and use direct firing on enemy positions.

Weird how the turret looks so similar to the FV4005 Stage II. The turret design for the Stage II was just to fit those large 183mm shells, fire, and be at least usable. But funny to see such a similar turret design come alone again for a prototype that never made combat, after some number of years.
Other than that, good page. I’d swear it takes at least 1-3 days for the team to make a page. Which I understand.
Best hopes for the future of this fine site… and maybe a little faster production!

An interesting resemblance you’ve pointed out there.
Pages can actually take several weeks or even months in researching and editing from our team. However we have a scheduling system to ensure a consistent stream of content for our readers without being overwhelming
– TE Moderator

we have found a new derp tank