The Italians copied the successful French Renault FT tank in the form of the FIAT 3000 right at the end of World War I and produced a large number of those vehicles. They were marginally better than the Renault FT forebear but, just like the Renault, suffered from some significant flaws. The interior was too cramped for the crew, the engine was underpowered, the armor was insufficient, the armament was too light, and the vehicle was effectively outdated when compared to the developments of armor in other countries. 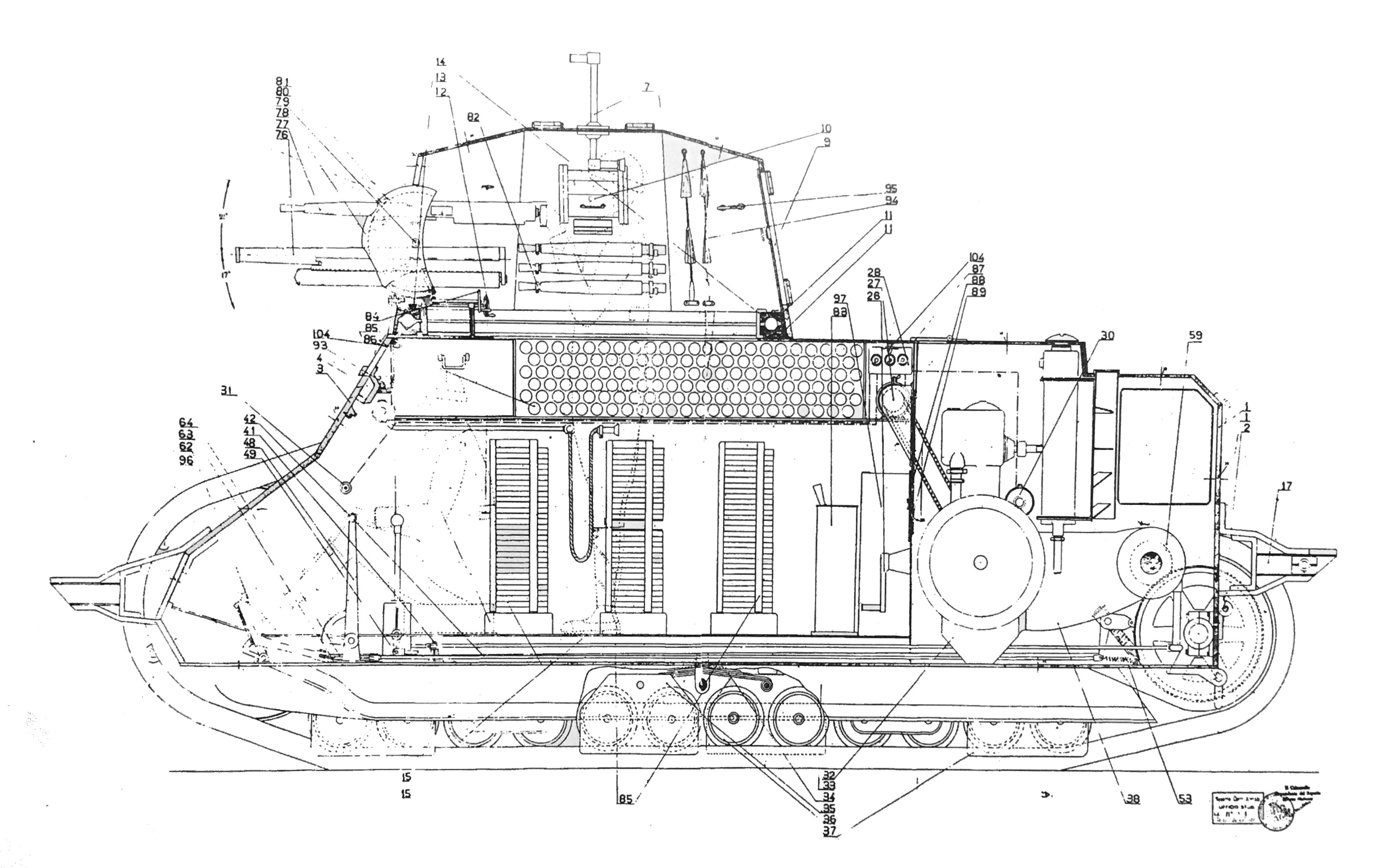 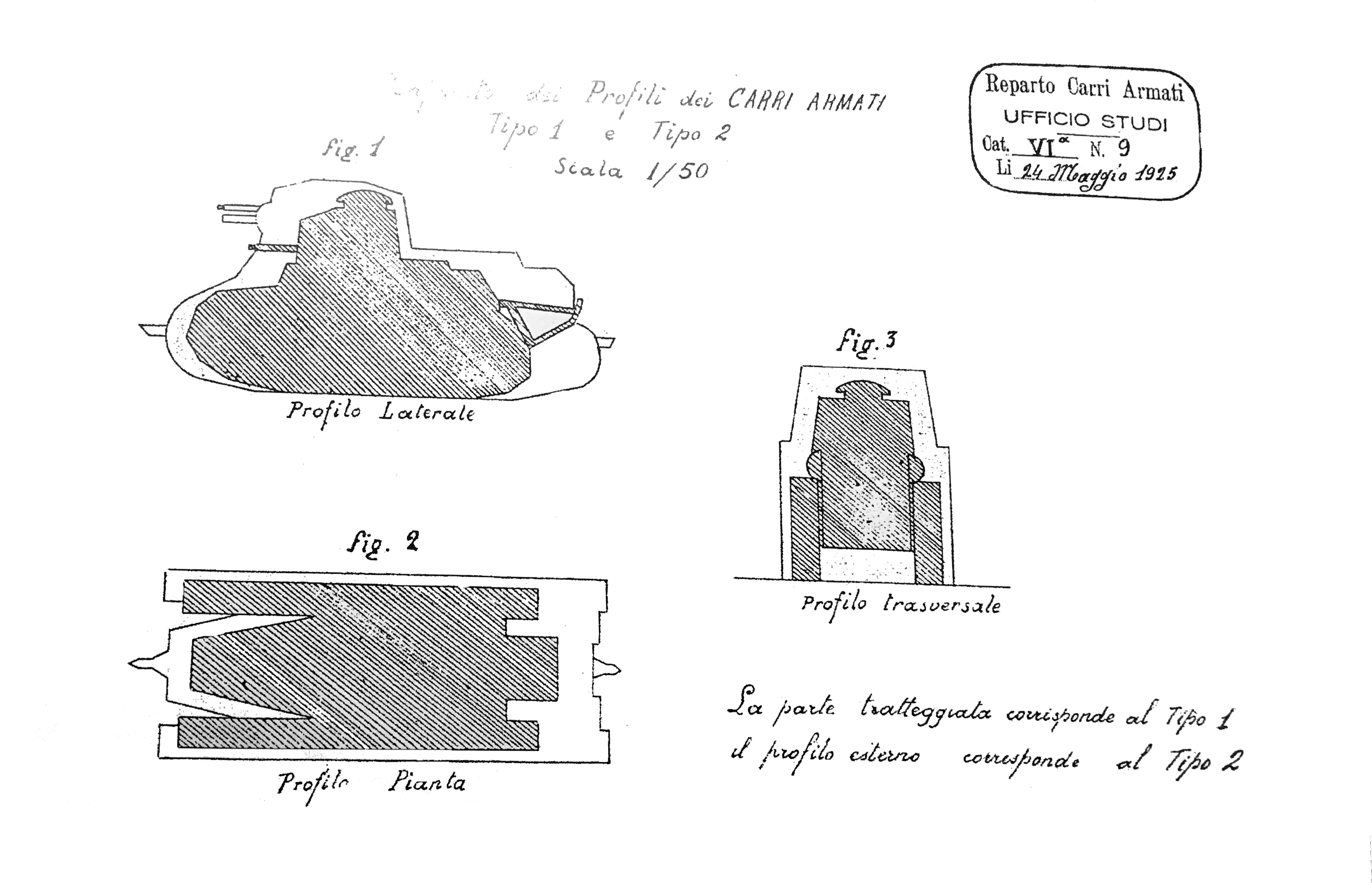 Comparison between the size and shape of the FIAT 3000 Tipo I to the FIAT 3000 Tipo II, dated the 24th May 1925. Source: Pignato
Many of the complaints about the FIAT 3000 seem to have come from the office of Colonel Maltese. They may have been influenced by decisions from more senior officers to replace the (then) machine gun armed FIAT 3000’s in service with something more useful. A medium or even heavy tank armed only with machine guns was not ideal. The Italians had already gained experience with a 37mm armed tank when they acquired a Renault fitted with a French 37mm gun in 1918. Why it took so long to appreciate the deficiency of being armed solely with machine guns is not clear.
Recommendations for the development of the new vehicle were that the company in charge should work more closely with the military so that the military criteria could be more closely matched by industry. As the military wanted a 37mm armed tank, the industry would have to provide it. It would ideally come in a new improved tank rather than just a retrofit of the existing FIAT 3000 as that 37mm gun-armed tank was already available in the form of the near identical Renault FT. Copying the 37mm armament would have been simple as to not require a whole new tank program.

A summary of the specifications this new tank would have to meet was presented on the 12th January 1925. It was to be significantly heavier than the FIAT 3000 Tipo I, at about 8500kg (with a limit set at 9000kg), compared to the previous tank at just 5300kg. The reasons for the weight increase were simple. This tank would have improved offensive and defensive capabilities and be more maneuverable than the previous vehicle. The crew was not specified but the old 2 man crew arrangement with a very overloaded commander, having to load, aim, fire and command the tank had been an obvious problem. Adding a third crew member in this larger vehicle is very likely for the command and control advantages it offered.
The new improved tank proposal was ready by May 1925 and very closely resembled the overall shape of the FIAT 3000/Renault FT and is even described as a “Renault Type Tank”. Fully tracked with a larger fully rotatable turret and an effective cannon, the new tank, named ‘FIAT 3000 Tipo II’ (Type 2) represented a genuine improvement over the FIAT 3000 ‘Tipo I’.

The FIAT 3000 Tipo II was to improve on both the firepower and ammunition capacity of the FIAT 3000 Tipo I. The single SIA machine gun with 3640 rounds of the Tipo I would be replaced with a 37mm cannon with 270 rounds and a FIAT M.1924 machine gun with 4500 rounds. A larger gun could have been fitted along with a new machine gun (improved from the FIAT M.1924) relatively easily but instead, the focus was on the newly made 37mm rapid-fire tank gun. This missed opportunity for a significant improvement in tank armament happened before the project had even been fully explored.
An addition to the offensive power of the tank was the rather unconventional ‘spurs’ projecting from the front and rear of the vehicle. Despite looking like mounting points for some kind of trench crossing tail these were instead felt to provide some additional advantage in combat against enemy tanks and defences although quite what that might be was not expounded upon. The ideal 37mm gun would eventually be found but only after the Tipo II project was already over. It was a 40 caliber long gun and was eventually retrofitted into some of the existing FIAT 3000’s. 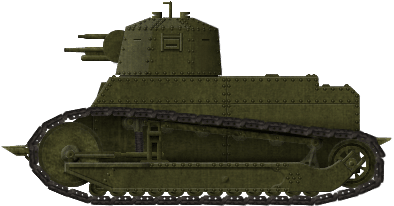 The armor on the FIAT 3000 Tipo I had not been sufficient. The Tipo II would increase the armor by 25% in some areas, to no less than 20mm in all exposed areas and use specially treated steel to obtain some marginal protection against smaller calibre cannon fire and artillery shells. The roof of the turret and presumably the hull roof would be 10mm thick and, like the rest of the armor, of good quality armor steel. The large octagonal turret would also have the benefit of a 68cm x 52cm wide double-doored hatch in the back to assist with entry and exit as well as ventilation. The fumes from the gun were to be removed by means of fans, also an improvement over the Tipo I. An additional bonus was the requirement for electric lighting. 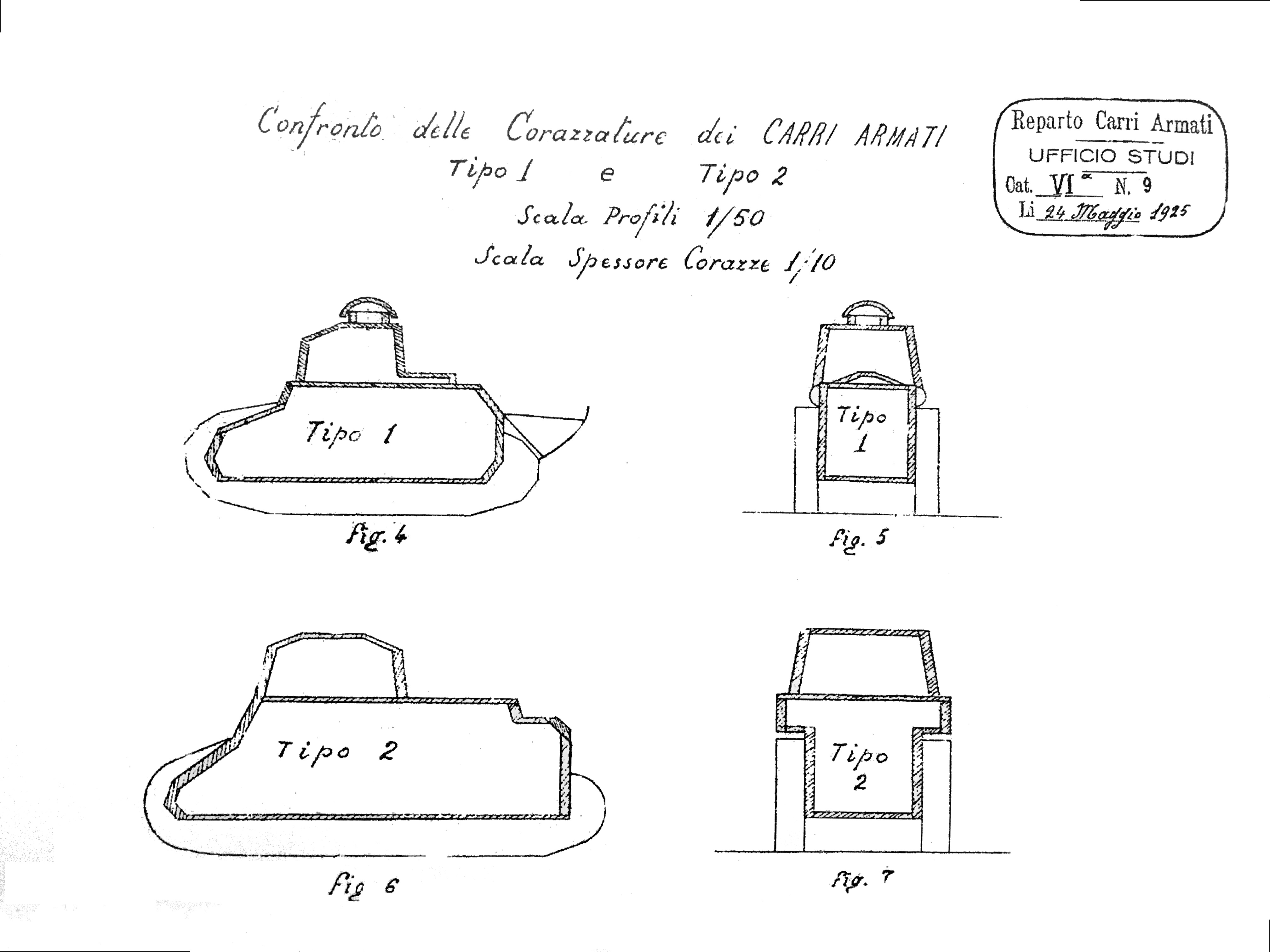 Comparison between profiles and armor of the FIAT 3000 Tipo I and FIAT 3000 Tipo II showing the improved armor thickness and profile of this vehicle, dated the 24th of May 1925 Source: Pignato

No particular engine was specified, but the Tipo II was to be faster and have a longer range than the FIAT 3000 Tipo I and it was decided that it should ideally be a four-cylinder petrol engine producing at least 75hp, although it is not clear what engine this would be. The vehicle would be steered by means of levers and epicyclics. The Tipo I could ford streams up to 1m deep whereas the Tipo II was to be able to ford 1.4m deep. A small change like this makes a large difference for a tank in terms of mobility and usefulness and as the role was one of assault and support it would have to be able to cross obstacles better than the tank it was supposed to replace. To this end, the trench crossing ability of the Tipo I, which was just 1.4m (without tail), would also be increased to 1.9m. This is the same as the Tipo I with a tail and the design of the Tipo II is such as it would easily permit the same type of tail used if required which would further extend the trench crossing ability to over 2m.

The idea for the FIAT 3000 Tipo II was well conceived in terms of replacing the first model FIAT 3000. Improving the tanks fighting capability from just having light armor and a machine gun with improved protection, on a faster tank, and armed with a 37mm rapid firing tank gun. It is not clear why this tank was not adopted but resources were limited and, while this model offered improvements, maybe these were insufficient to warrant serial production of a new tank.
As it happened, the FIAT 3000 ended up being upgraded with a new 37mm cannon. Trials were carried out with the short (L.27) 37mm gun and then high-velocity 37mm gun by 1927. This was probably another reason to discontinue this Tipo II tank idea. The Tipo I could be cheaply upgraded to carry the same armament at the price of the other advantages the Tipo II offered. It simply didn’t have a significant edge so as to render the Tipo I obsolete. No Tipo II vehicles were ever made and the project was soon forgotten about.