The British company of Vickers was one of the biggest tank producers in the years leading up to the Second World War. In 1925, the company began production of their Medium Tank Mk.II and the Irish Free State (today the Republic of Ireland) were interested in purchasing a similar tank.
In 1929, Vickers built the Medium Mk.D, a derivative of the Mk.II built solely for the Irish Defence Force (IDF. Irish: Fórsaí Cosanta, officially: Óglaigh na hÉireann). Only one of these tanks was ever produced. It would be Ireland’s first tank and was adopted by the 2nd Cavalry Squadron of the Irish Cavalry Corps (Irish: An Cór Marcra). 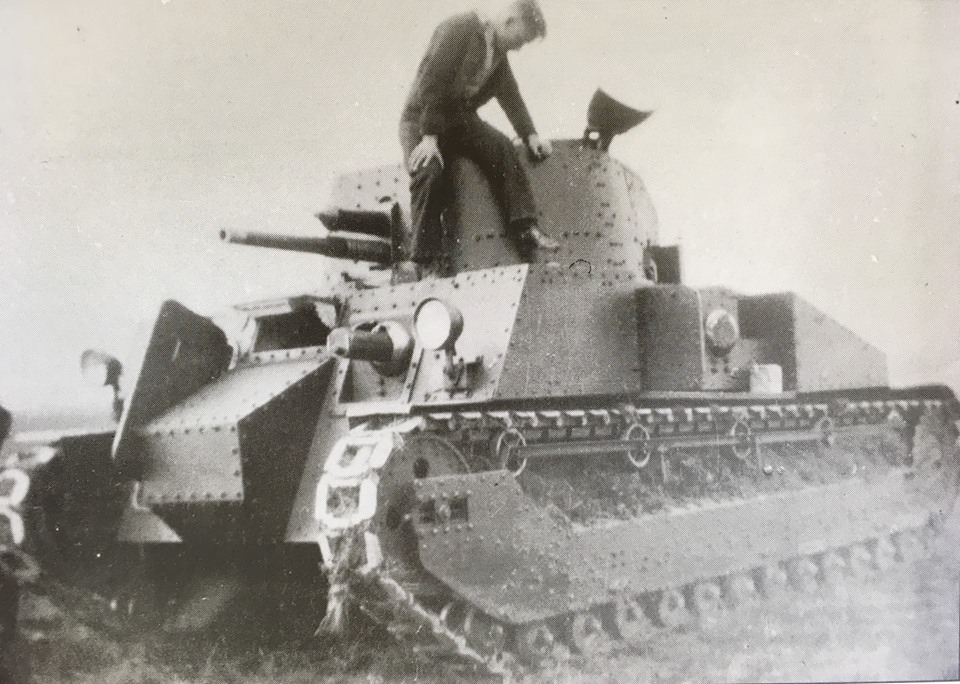 A Cavalry Man sits atop the turret of the Mk.D. The Commander’s hatch is open behind him. Photo: Irish National Archives

The Mk.D was almost identical to the Mk.C which was sold to Imperial Japan in 1927. Any differences between the two models are not very well documented, but it seems the only major difference with the Mk.D was the addition of a cupola above the commander’s position in the turret.
What we do know is that the Mk.D was an upgrade of the standard Mk.II. It had a more conventional design, with the engine relocated to the back of the vehicle. The engine in this new compartment was more powerful than previous models. This engine was a water cooled, 6-cylinder Sunbeam Amazon petrol engine, rated at 170 bhp. This engine gave the tank a top speed of 20 mph (31 km/h).
The tank was of bolted construction, but the exact thickness of the armor is unknown. It would not be too far-fetched to assume it had similar armor properties to the Vickers Mk.II, which had armor of up to 8mm (0.31 in) thick. Other upgrades incorporated on the Mk.D and C for that matter included a slight elongation of the suspension and improved mud-chutes. The suspension consisted of 6 pairs of double-wheel bogies connected to coil springs. There was also a single track-tension idler wheel (jockey-wheel to Americans) on a single coil-spring in between the leading bogie and idler wheel at the front of the tank. There were 4 track return rollers and the drive wheel was at the rear. 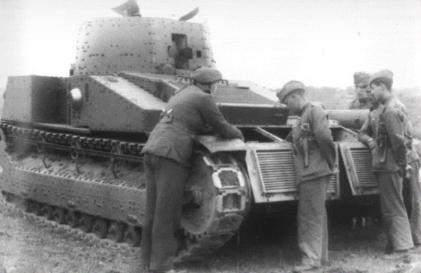 Troops are instructed on the operation of the tank’s powerplant. The turret is traversed backward. Note the missing 6-Pounder gun which would otherwise be pointing over the engine deck. Photo: MMP
Armament was also different from previous models. The main armament consisted of a low-velocity 6-Pounder gun designed to fire High-Explosive shells in an infantry support role. This was in contrast to the higher velocity 3-Pounder guns being used on other British Vickers tanks. It was also armed with no-less than four Vickers water-cooled .303 machine guns. Two of these were located on the vehicle’s flanks. There was also one mounted in the turret bustle and another one on the left of the upper glacis.
The Mk.D had a crew of 5. This was composed of the Commander, Gunner, Loader, and Driver. The role of the fifth man is unknown, but he likely had the role of machine gunner. The driver’s position was rather exposed, as it was located behind a bulbous ‘nose’ at the front of the tank. The driver entered his positioned via a large door on the right of the ‘nose’. The rest of the crew entered via hatches on the flanks of the tank.

The Irish were relative latecomers to the idea of tank warfare. Prior to the 1930s, the only experience they had had with armored vehicles was with a few types of armored cars, which included the Rolls-Royce and Lancias.
The Mk.D was tested in the U.K. by Ireland’s foremost advocate of armored warfare, Lieutenant Sean Collins-Powell. The lieutenant was the nephew of the assassinated Irish revolutionary, Michael Collins. He was trained at Aberdeen Proving Grounds, Maryland, USA in tank usage and application. Collins-Powell took delivery of the tank, then accompanied it back to Ireland. 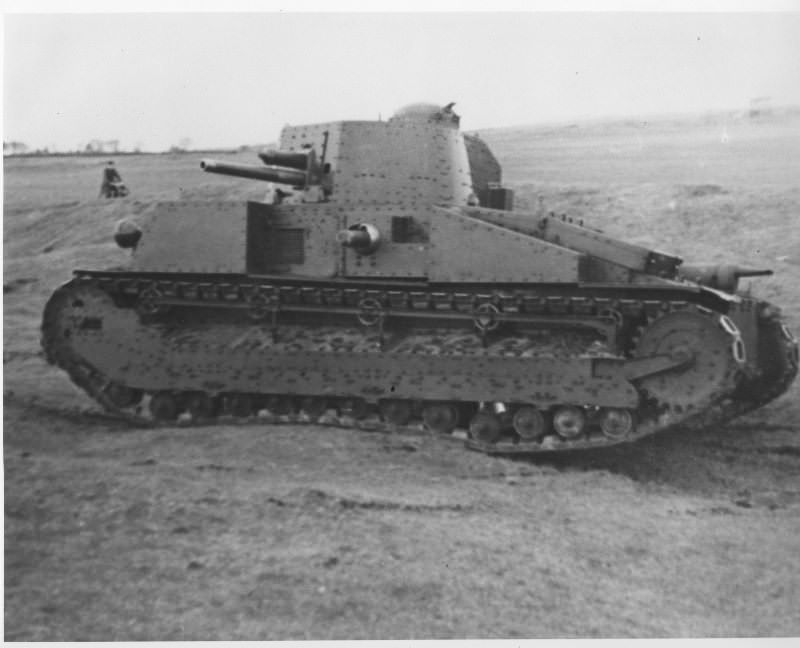 The Mk.D at the Curragh. The Commander’s cupola is clearly visible atop the turret. Photo: Aaron Smith

Rendition of the Vickers Medium Mk.D by Tank Encyclopedia’s own David Bocquelet

Unfortunately, not much is known about the Mk.D’s time in service with the Irish Army. We do know that it was assigned to the 2nd Cavalry Squadron of the Irish Cavalry Corps, based at the Cathal Brugha Barracks (Irish: Dún Chathail Bhrugha) in Rathmines, Dublin. 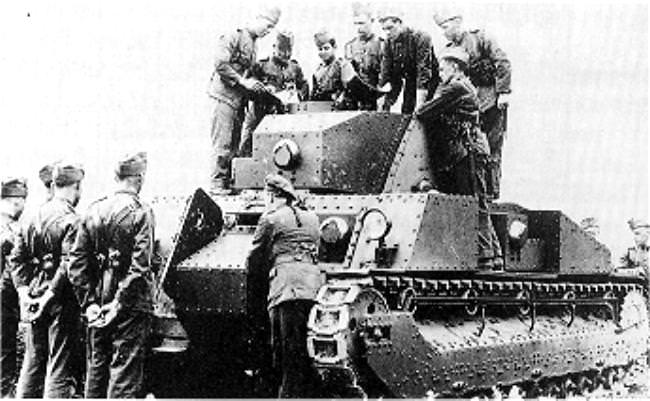 Irish troops surround the tank, listening to the instructor who stands at the driver’s position. The man is wearing the traditional ‘Glengarry’ hat of the Cavalry Corps. The turret is traversed all the way so what we can see here is its bustle and vacant Vickers MG position. Photo: aviarmor.net
The tanks would have been used for gunnery and combined-arms training with infantry at the Glen of Imaal (Irish: Gleann Uí Mháil) in the Wicklow Mountains. 5,948 acres of the Glen had been used as an artillery and gunnery range since 1900.
In 1934-35, the Mk.D was joined in the 2nd Armored by two Swedish L-60 Light Tanks. The small and nimble light tank built by Landsverk surpassed the slow and cumbersome Vickers, which was now largely outdated in almost every way. 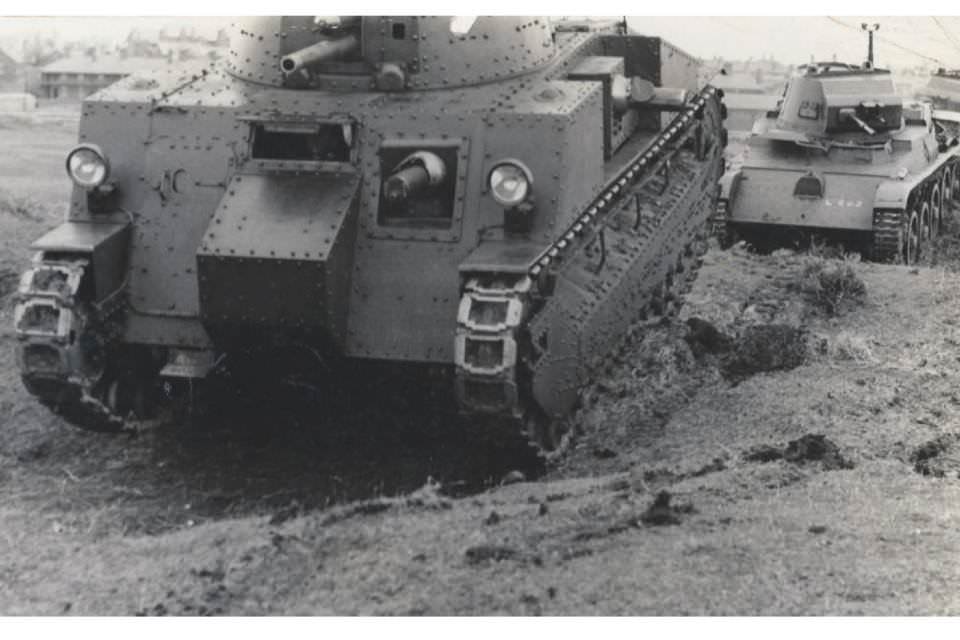 The Mk.D at the Curragh followed by one of the L-60. Photo: Aaron Smith

The tank was officially removed from active service in 1937. In 1940, the Mk.D was damaged beyond repair while attempting to cross obstacles constructed by the Engineering Corps in a training operation. There is evidence to suggest that the tank’s engine may have also caught fire.
Following this incident, the tank was scrapped. The 6-Pounder armed turret was kept, however, and placed as a static turret as part of defenses outside of Curragh Camp, Kildare, where the tank spent its final years. Only the gun still survives, it is currently on display at the Curragh Camp Museum. 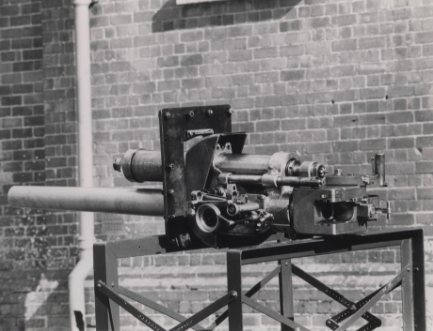 The Mk.Ds gun, the only surviving piece of the tank. Photo: Tank Archives

Can not find Vickers Medium Mk. D in the English section.