In 1941, The QF Vickers 2-Pounder had been recognised as likely to become obsolete by the time that the AC tanks were scheduled entered production. The armament of the Mark I “Sentinel” was seen as transitional since the beginning, and the tank had been designed and balanced with the intent of mounting the Ordnance QF 6 Pounder (57 mm/2.24 in) gun before said gun was even available, shadowing the evolution of the British cruisers such as the Crusader.

Tanks equipped with the 6 pounder gun were to be designated AC IA and would have been in all other details identical to the AC I, with one minor exception. Tanks fitted with the 6 Pounder gun were to have the hull machine gun and accommodations for the hull gunner removed to make way for remodelled ammunition storage, of which 100 6-pounder rounds were to be carried. Due to production delays and a lack of supply of 6 pounder guns the AC IA never left the drawing board and was superseded by the AC III. Additionally, other armaments were investigated for the AC tanks.
As early as December 1941, Colonel Watson had proposed the possibility of mounting an ordnance QF 25 Pounder (87.6 mm/3.45 inch) field gun via means of an adapted gun cradle for the 3 inch (76.2mm) 20 cwt Anti-Aircraft gun. This proposal met with Army approval and in February of 1942 two 25 pounder guns were delivered to the DAFVP for experimental work.
The proposed 25 pounder tanks were to be designated AC IB and were in all aspects identical to the AC IA design bar the changes to mounting and fittings suitable for the 25 pounder gun. By June 1942, a 25 pounder gun, with a modified recoil system, was fitted to an enlarged turret and mounted on the E2 prototype chassis.
Test firing of the gun proved extremely positive results, with the Director of Artillery remarking in his 1942 report ‘Accuracy is superior to that of a field mounting. Noise and blast within the turret is minimal, similar to that of a big air rifle. It was discovered, from personal experience, that once layed successive shots could be fired on target without needing to re-lay the gun’
Like the AC IA, the AC IB would ultimately remain unproduced. Events in the North African theatre and changes in army policy at home would overtake both designs, leading to a more radical revision in the form of the AC III. The new AC I was intended to be sent to North Africa by late 1942, however concerns had been aired in regards to dealing with the latest 50 mm (1.97 in) armed Panzer III and up-gunned Panzer IV F2.

By mid-1942, the 2 pounder was widely derided by Australian officers as a ‘pea-shooter’ and ‘popgun’ and the 6 pounder was looking increasingly obsolete in the face of German gun advancements. To address these fears, Field Marshal Sir Thomas Blamey, Commander in Chief of the Australian Forces, tendered a proposal to the Australian war cabinet in July of 1942.
Blamey proposed that the Australian tanks needed to get ahead of the Germans in terms of firepower, and the only solution was the QF 17 pounder (76.2 mm/3 inch) anti-tank gun. However, the 17 pounder had barely entered production in the UK and surplus guns for shipment to Australia were not at all available in the UK. Hence the 25 pounder gun, mounted on the refined AC Mark III, received much consideration as a stopgap measure.

Frontal shot of tank 8066. Notice the absence of the AC I’s ‘Distinctive’ MG mounting and gunner’s hatch, as well as the large mantlet bulge housing the 25 pounder gun recuperator above the gun barrel. Source: Ed Francis

AC III turret and basket being assembled on a turret stand, the turret front, mantlet, and gun have not yet been fitted. The rear bustle of the turret is slightly longer than on an AC I turret, stowage boxes for 25 pounder propellant charges can also be seen on the turret basket. Source: Ed Francis

The AC III “Thunderbolt”  was fitted with a 25-pdr (90 mm/3.54 in) howitzer. More than 100 hulls were in varying states of completion when the entire program was cancelled in July 1943.

The AC III designation was actually given to two tank designs, named ‘Scorpion’ and ‘Thunderbolt’ respectively. The Scorpion was a standard AC I, but modified to mount the desired Pratt and Whitney Wasp radial engine. Director Alfred Reginald Code and the DAFVP had struck a deal with the Commonwealth Aircraft Corporation (CAC) in October of 1941, CAC would deliver 200 engines for tank use by mid-1942 with the loss to aircraft production being taken up by engines ordered from the USA. The Cloverleaf Cadillac engines would be installed as an interim measure for the first 65 tanks, after which the new engine and other sundry modifications would be implemented from the 66th tank onward.
Production of the AC III Scorpion was planned to be conducted at a new tank assembly annex to be constructed in Port Melbourne, Victoria, in order to supplement the output of the Chullora Tank Assembly Workshops in Sydney. Hull castings were to be produced locally in a purpose built foundry operated by the Charles Ruwolts Company, however automotive components such as the gearbox and final drives were to be imported from the United States. The Australian type crash gearboxes were contracted to be produced by the US based Oliver Farm Equipment Company.
For tank use the Wasp was to be down rated to 400 horsepower and re-designated ‘Scorpion’ with tanks using the engine carrying the same name. However, experimental testing with the Scorpion engine revealed undesirable traits, such as poor torque output at low RPM and a high RPM ceiling required to reach maximum power output.
By Mid-1942, DAFVP engine expert Robert Perrier had proposed a new design of the triple Cadillac engine, named the Perrier Cadillac. The Perrier Cadillac took the V8 engines used in the AC I and rearranged them in a radial formation connected together on a common crank case, much like the Chrysler A57 multibank. This new engine took up less space than the previous cloverleaf configuration and also delivered an increased output of 396 hp with the army’s new higher octane petrol. The Perrier Cadillac was also shown to perform significantly better than the Scorpion engine in terms of torque and horsepower, particularly at lower RPM. 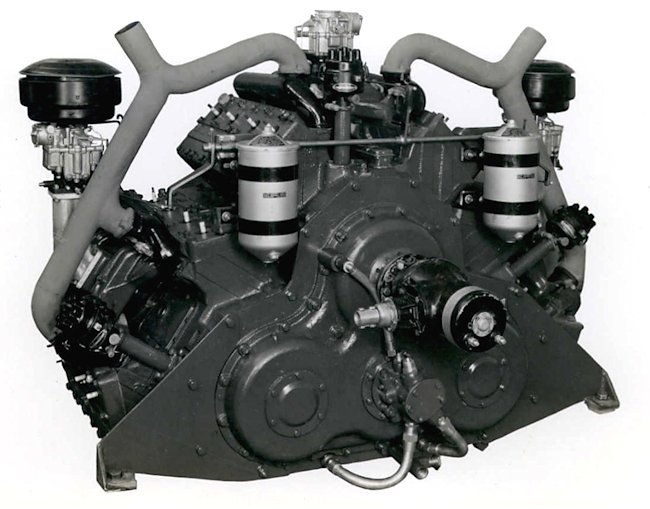 The AC III ‘Thunderbolt’ was a distillation of many of the previous innovations mentioned. The 25 pounder gun was selected as the main armament, contrary to popular belief not for use as a close support weapon, but for the value of its 20 pound Armour Piercing shot as well as its obvious advantages in terms of High Explosive shells. The finalised version of the 25 pounder mounting was fitted with a shortened recoil system, later used in developing the QF 25 Pounder Short pack howitzer, mounted above the barrel in a distinctive bulge in the mantlet. Additionally, the barrel length was increased by 18 inches (457.2mm) yielding an estimated increase in muzzle velocity of 150 fps (45.72 m/s).
To make room for the more voluminous ammunition, the hull machine gun was eliminated and the crew reduced to four, although, again contrary to popular belief, the turret coaxial machinegun was not deleted from the design. The hull was remodelled with the deletion of the machinegun position, with an increased frontal slope and new design for the driver’s primary and escape hatches.

Interior photo of the driver’s position of the AC III, the driver’s seat backrest is folded down. The redesigned primary and escape hatches can be seen in the top right and the hull machinegun and gunner’s position of the AC I are absent. Notably the 25 pounder ammunition rack  normally located on the left side of the gearbox does not appear to be fitted in this photo. Source: Ed Francis

Closeup of the driver’s position of the AC III. The locally produced crash gearbox can be seen on the left, notably the driver’s instrument panels have been revised from the AC I, reflecting the changes to the engine. The similarity of the gearbox and driver’s controls to those of the M3 or M4 medium tanks can be clearly seen. Source: Ed Francis
Given its advantages, the new Perrier engine was chosen with the rear of the tank being remodelled to accommodate. Notably, the engine deck was distinctly flatter than on the AC 1 and the amount of access hatches was changed. To accommodate the new 25 pounder gun a new turret was produced, identical in layout and general fitting to the AC I, but with slightly increased dimensions, particularly at the rear. Turret ring diameter on the first production tanks was 54 inches but this was intended to be enlarged to 63 inches on later tanks (later suggested to be further increased to 70 inches) (1.37/1.6/1.78 m). Armor was intended to be raised up to 75 mm (2.95 inches) but this was never implemented.
The first production prototype (tank number 8066) AC III arrived in January of 1943 with a 1000 round test firing of the 25 pounder on the E2 tank occurring in the same month. Trials were delayed due to uncertainty on the future of the tank program and army prevarication on finalising the stowage requirements. Under testing a number of minor faults were revealed but overall the tank was received well, with the testing officer remarking that the production models would be ‘A good fighting vehicle with excellent armament’.
Interestingly, the prototype was not fitted with semi-automatic gear on the gun, and the test report recommended against the installation of semi-automatic gear or the use of one piece ammunition for the gun. The first prototype had just finished its trials and the first production batch of between 120-150 tanks was under construction in July 1943 when the entire program was terminated by the Australian Government.

The termination of the entire Australian Cruiser program in mid-1943 was dictated by a mixture of practical and budgetary reasons as well as an ongoing political rivalry between the Ministry of Munitions and the Army.

The prototype AC III (tank number 8066) is held in the collection of the Australian War Memorial in Canberra, formerly on display outside it has since been replaced by an RAAC Centurion 5/1, and is now housed in the Museum’s Treloar Technology Centre which is not open to public viewing.
Prior to closing in 2006 the Melbourne tank museum displayed an AC III tank assembled from castings salvaged from firing ranges, distinctly having a 2 pounder shell lodged in the side of the commander’s cupola. This composite tank was internally unfurnished and missing several parts, such as the main gun,  turret front & mantlet , and the driver’s hatch. The gun was substituted by a salvaged 25 pounder barrel mounted in the turret with the turret front covered over by a shaped tarpaulin. The driver’s hatch was substituted by  a driver’s view hatch taken from an M3 medium tank. After the closure of the Museum and auction of the collection the location of the tank is not currently known.

An article by Thomas Anderson

Can not click on the Australian flag/link at the top of the page.

There is not systematically a link on flags each time. It must be done in code. That’s part of a never-ending standardization process. Now it’s done for all Australian ww2 posts.