During the war for the liberation of Yugoslavia, the Partisans were often forced to attack strong enemy positions due to the lack of proper weapons and equipment, which often lead to heavy losses. During the attack on the village of Srb, the Partisans came up with an idea to build an armored vehicle which would help them in the upcoming offensive. This vehicle was later known as a “Partizanski Tenk” (Partisan tank). 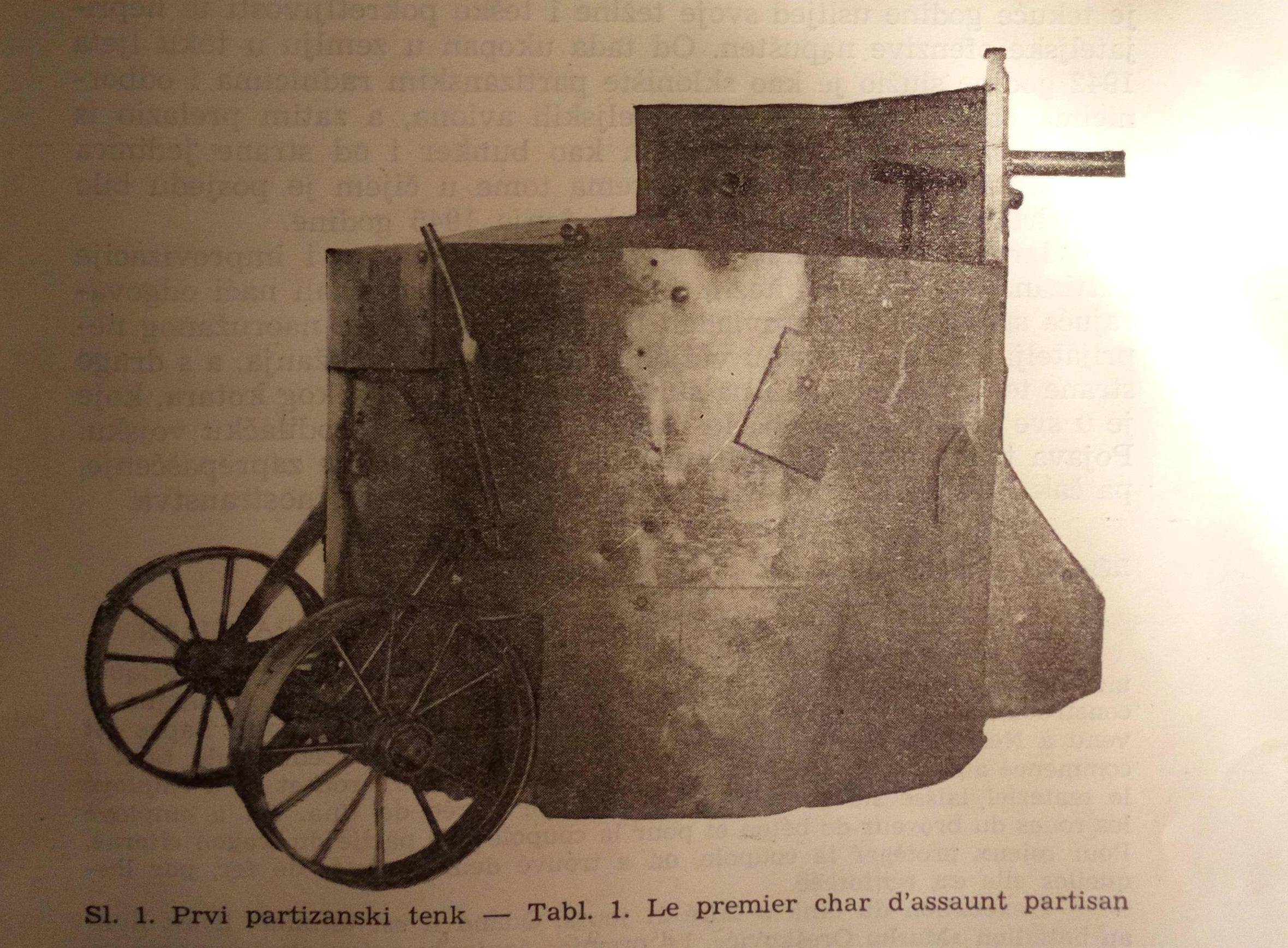 A side view of the Tenk. Its crude construction can be observed. Source: Prvi Tenkovski Bataljon

The Uprising in Lika

After the fall of Yugoslavia in April 1941, the Communist resistance movement spent the next few months gathering any available weapons its members could find. As the Germans began the invasion of the Soviet Union in June 1941, the Yugoslav Communist leadership decided that it was time for the beginning of the liberation war against the occupying Axis forces. For this purpose, on the 27th of June 1941, they founded the National Liberation Army of Yugoslavia known as ‘NOVJ’ (Narodnooslobodilačka vojska Jugoslavije), but otherwise known simply as the ‘Partisans’.
By the end of the year, many hard battles with the Axis forces had been fought across the Yugoslav territories. Many territories were liberated but also lost in the following Axis counterattack. One such battle was fought for the liberation of the territory of Lika, near the Croatian Adriatic coast. Here, the Ustasha (Croatian military units) forces were committing crimes such as killing the local Serbian civilian population in June 1941. In response to this, in early July, the Partisans formed the Headquarters of Guerrilla Detachments (Štab Gerilskih Odreda) for Lika. Later that month, an uprising began against the Axis forces, positions, and installations in this area. It is here, in the small village of Nebljusime, that the story of the Partizan Tenk began.

Where the Idea Came From

With the fighting for the liberation of many towns and villages around Lika underway in late 1941 and early 1942, the Marko Orešković Battalion, with the support of other Partisan units, was given orders to expel the Italian garrison from the village of Srb. There are some disagreements in sources about the composition of the defending garrison, as it was allegedly supported by Ustasha and Chetniks forces. This assault would be no easy task though, as the defending garrison had time to fortify the larger buildings (school and municipal building) and houses into strong bunker positions. In addition, many smaller and larger bunkers were also constructed, armed with machine guns.
The Axis forces (especially the Italians) during the war tried to suppress and defend against Partisans attacks by concentrating garrison forces in many cities and villages. It was hoped that the Partisans would be discouraged from attacking positions with strong military forces present. Such scattering of their forces made many such positions an easy prey for the Partisans, as they simply could be isolated and destroyed one by one. As these positions lacked any mobile response forces, they could not help the besieged garrisons in most cases. The Partisans managed to surround and destroy many of them. The situation of Srb was different, as it was well fortified and an attack on it would lead to many losses.
During the preparations for an attack on Srb, the commander of the Marko Orešković Battalion, Đoko Jovanić, and the Political Commissar Milan Šijan came up with the idea to build an armored vehicle (better said a mobile bunker) which would help with taking Srb.

The man responsible for the design and creation of the Partisan Tank was Stevo Brozović. He gathered a group of six engineers and blacksmiths (Ivan Razdrih, Milan Maričić, Rade Ljubojević, Nikola Maričić, Lajoš Bikvić, and Ivan Špacapan) and set a base for its construction in a forge belonging to Rade Ljubojević in the village of Nebljusime. First, they collected any useful material which could be found. They were lucky, as nearby there was an abandoned railroad station and train yard with plenty of building materials. Three wheels and axles were taken from a concrete mixer. A train fuel tank wagon was found abandoned near a train station at Loskun. Also near Loskun, on a railroad bridge, the Partisans found two large metal plates (8 x 1 m). These large plates were transported on a small railroad cart to Loskun and then, as there were no good roads to Nebljusime, they had to be manually carried with the help of 25 local inhabitants. As all materials were transported to the main base in Nebljusime, the work on the vehicle began immediately. After 21 (in March 1942) days and nights of hard work, the ‘tank’ was completed. This vehicle never received any special name during the war and it was simply called in the Partizanski Tenk in post war sources.

The base for the Tenk was a reused train fuel tank. While the sources do not give precise information on its construction, it is very likely that the Partisans cut the fuel tank in half and used it as a base. This fuel tank had 6-8 mm thick steel walls and it was 1.25 m high and 1.7 m wide. This fuel tank was then covered all around (except the top and the bottom) with 4.5 mm thick steel plates. This improvised armor was tested with machine gun fire at ranges of 100 to 300 m, where the bullets had no problem to break through. As a result, in order to increase armor protection, another layer of 4.5 mm thick plate was added. The armor was held in place by welding and using bolt and rivets. Between these two plates, there was a space of 6-8 cm which was filled mostly with sand and textile materials. According to some sources, a third layer of metal plates was added to the vehicle. It is possible that these sources mistakenly consider the original fuel tank steel layer as the first armor layer, with the two added later making three in total.
It is unknown if the improved armor was enough to stop small-caliber rounds. Anti-tank and artillery guns would most likely easily have destroyed this vehicle, but these weapons were not present at Srb and, in general, were rare in 1942 in the region.
An extra three-sided 2 m long and 0.5 mm thick plate was added on the top front part. This metal plate may give the wrong impression that it was used as a firing position. This is not the case, as there was no door on top of the vehicle and the crew could not reach it from inside. This plate was actually used in combination with three dummy guns in the hope of confusing the enemy.
For movement, three metal wheels with a diameter of 0.5 m were installed, two to the rear and one in front. The front wheel could be controlled from inside the vehicle. It was protected with two metal plates on its sides. The rear two wheel’s axle was not provided with any armor. Above the rear right wheel, there was a metal lever that was used as a brake and was operated from outside the vehicle.
In front of the ‘tank’, there were four armored plates (0.7 x 0.44 mm size) that could be moved and used as firing ports. The main armament was composed by the crew’s personal weapons, like rifles and light machine guns. 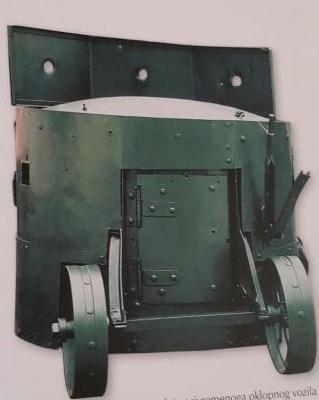 A view of the rear door of the Tenk. Above the right wheel, the lever that served as a brake can be seen. Source: Hrvatski Ratnici Kroz Stoljeća 4
The crew consisted of eight men from the Marko Orešković Battalion. The commander was Milan Žeželj, his second in command Miloš Rastović. This vehicle was too small for all of them to fit in and had only four firing slots, so only four crew members were stationed inside the vehicle. The remaining four crew members, while not specified in the sources, would most likely help during the transport and act as a support unit in combat.
Due to the small size of the Tenk, the interior was very cramped and the crew members would have most likely had to stay in a bent-down position. The cramped interior would also have made the use of personal armament difficult. The only way for the crew to enter this vehicle was through a small rear door. Precise information about the interior of the vehicle is lacking.
The tank did not have any engine, but was instead moved by its crew or drove by horses. While there is no information about its precise weight, the Tenk would certainly have been quite difficult to move. 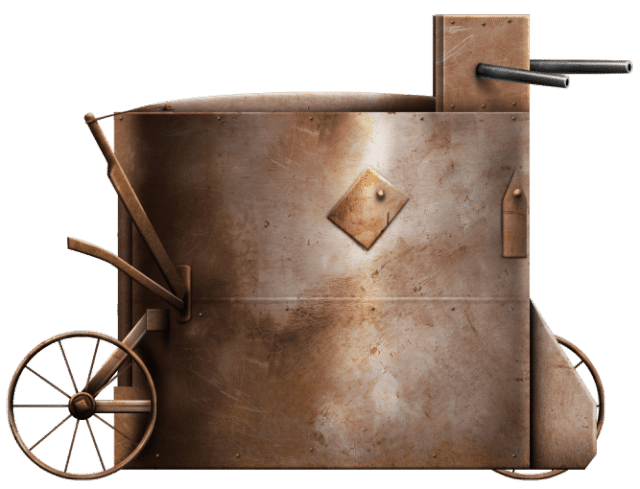 Illustration of the Partizanski Tenk (Partisan Tank) by Yuvnashva Sharma, funded by our Patreon Campaign.

It is somewhat ironic that, by the time the Partisan Tenk was completed, the village of Srb was abandoned by the Italians and the Partisans took it without a fight. The Tenk was moved to Donjeg Lapca, where it remained until a large enemy offensive in mid-1942 when it had to be abandoned because of its heavy weight. It was later recovered and dug into the ground to be used as an air cover bunker by the Partisans. It would change hands many times during the war until the Partisan drove the Axis forces from this region in early 1945.
There is another version of the events that claims the vehicle was never used due to the capture of the first real tanks by the Partisans near Ljubovo in early 1942. 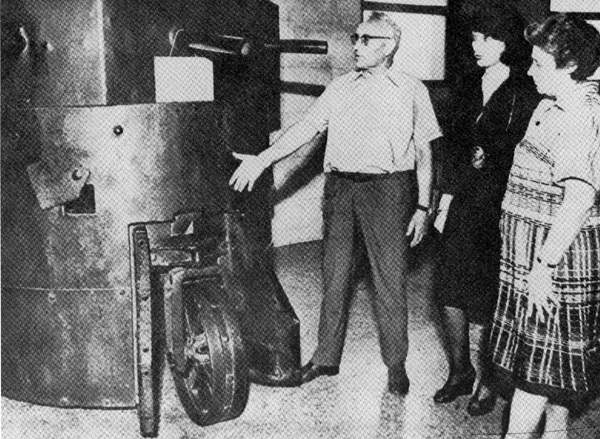 In 1946, the Tenk was donated to the Croatian History Museum, where it is still located. Its small size compared to the people next to it is apparent. The interior of this vehicle was surely cramped and hard to work in. Source. 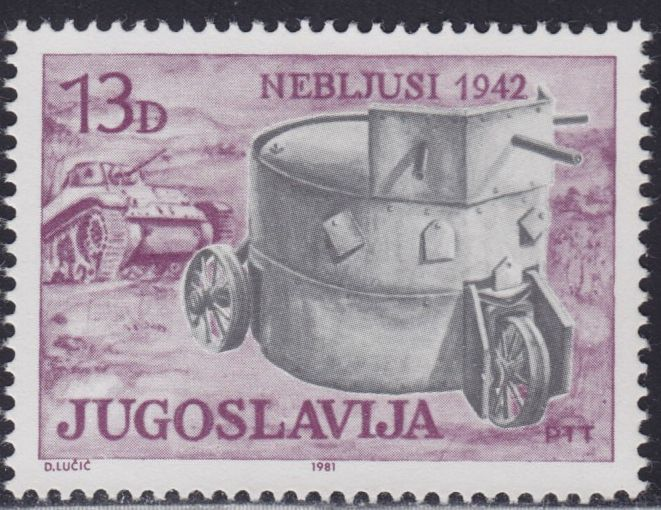 In 1981, Postmark stamps with the Partisan Tenk were printed. Source.
The Tenk did survive the war and was donated in 1946 to the Croatian History Museum (Hrvatskom povijesnom muzeju) in Zagreb by one of the men who built it. There, it can be seen to this day outside the museum.

While, in theory, the Tenk could have helped the Partisans in overcoming enemy positions, in reality, it is unlikely that it would have been useful. While it proved that the Partisans had good intentions and the determination to prevent unnecessary losses, it was simply too crude of a design and lacked any means of moving itself around. Its armor may have been strong enough to stop small-caliber rounds, but against larger caliber rounds it would have been helpless.

How would one of the crew inside of the tank use the external brake lever?