There are not many tracked vehicles designed to work underwater, and whilst these might not fall into the usual category of what people consider ‘tanks’, they are worthy of consideration by anyone serious about tracked vehicle technology. The underwater realm offers challenges unique to vehicles whether they are armed and armored or not.

This unusual vehicle was the brainchild of Captain Jesse Wilford Reno (4th August 1861-2nd June 1947), an American inventor from New York, whose most famous contribution to western culture was not a tracked machine, but the escalator, invented in 1899. As an anecdote, his father, Major General Jesse Lee Reno, a Union General in the American Civil War, had Reno, Nevada, named after him. In addition to this, in 1919, Mr. Reno saw an opportunity to put his inventive mind to use; he built an underwater machine designed for salvage operations.

In 1919, underwater operations were still extremely hazardous. The personal diving suit was a huge, clumsy and dangerous affair, and submarines were in their infancy, with numerous accidents still occurring. The depth to which many of these early underwater pioneers could venture was extremely limited and, therefore, salvage at even a nominal depth at the time was impossible. Reno was therefore correct in assessing an important commercial market for a machine able to operate at depth and salvage valuable cargoes from sunken vessels.

The design was a simple one, basically being a sealed and heavily protected cylinder, capable of withstanding external water pressure, mounted on tracks for mobility. Large enough for up to two men, the cylinder measured some 6 feet (1.82 m) in diameter and 8 feet (2.44 m) in height according to the patent. During the recovery of the ‘Scally’, which sank in 1923, the Reno Underwater Tractor was described as being 7 feet (2.13 m) in diameter and 9 feet (2.74 m) tall, weighing some 18 tons (16.3 tonnes).

Air supply was provided by the ‘mother-ship’, which delivered air for the occupants of the vehicle but also compressed air which was to be piped into a large buoyancy sack attached to the sunken vessel or part of it. That buoyancy sack would then rise to the surface for recovery. This is still, to this day, effectively the same means by which things are raised from the sea. The mother ship also provided an electrical supply for the vehicle by means of the same umbilical cable down which air was pumped. This electrical power was used for lighting and also to power the equipment in the vehicle. Vision from inside the machine was limited to just a small glass porthole in each ‘side’ of the cylindrical chamber. Access was only possible via a single circular hatch on the roof of the machine.

For raising a sunken vessel, the machine would simply be used to connect a series of buoyancy sacks along the exterior of the vessel which, once filled with air, would bring the whole ship either to the surface or just off the sea-floor so it could be towed to shallower waters for salvage. Additionally, clever knowledge and use of the tides could be used to raise the ship, move it to shallow water and then resink at high tide, whereby it would be exposed by the receding waters.

Air Bags and the Cannon

The ‘airbags’ were, in fact, large steel boxes into which the air was pumped, but the question was how to attach these buoyancy devices to the hull of the ship. Each one would be exerting a lifting force of 300 tons, so the connection had to be extremely strong. The solution Reno settled upon was that of hooks which would be fastened into the side of the sunken vessel’s hull.

The question, therefore, was how to make holes in the side of sunken vessels. In his original 1919 Patent, he determined that it should be made by means of a drill rotating within a water-tight coupling. This drilling system though, was after he had already submitted a patent application for the concept of using a gun to make the holes.

The hole would be made by firing a horizontally mounted gun using compressed air. The calibre of this air cannon was given as 4” (101.6 mm) of an unspecified “well-known type” firing a pointed solid steel slug through the outer hull of the sunken vessel to make a hole for the attachment of buoyancy bags/boxes. The barrel of this gun was supported by the walls of the crew chamber through which it was projecting and was fitted with crude ‘stuffing boxes’ acting as the recoil buffers. As drawn, this arrangement was hazardous and likely to violate the watertight nature of any seal around that gun. In his submission, Reno mentions that he considers a gun using the ‘Davis’ principle to balance the recoil of the gun. The shell was only to be fired with enough force to rupture the side of the hull without causing damage to the interior of the ship, although quite how this was to be calculated is unclear. With up to 50 holes needed per side or a hole every ten feet (~3 m) by Reno’s calculations, a large number of projectiles would have to be carried in order to perform this means of hole-making. The fact that a month after this ‘gun’ idea had been submitted he had switched to a drilling system demonstrates that even he understood the impracticality of this underwater cannon concept. When Reno’s machine was used in 1923, it was using not one but two 4” (101.6 mm) diameter drills.

The vehicle itself was described as an ‘endless track tractor’ or ‘mobile tractor’ consisting of a large watertight cylinder mounted on a low pair of tracks. No suspension was provided in the track run on either side which was made from two large wheels, one at each end, separated by 5 smaller wheels. All were attached to a rigid horizontal frame. Drive for the tracks was delivered to the rear-most wheel via a drive chain running from a small motor estimated to be just 20 hp or so mounted inside the steel chamber. Each track was driven independently with the clutch controls worked from a small handwheel. This level of control over the drive to each track was complex but allowed for fine manoeuvering. The operator, who would also have to drive the machine, could maneuver by means of clutches that could engage and disengage with the tracks. Engaging the right track, the machine would move to the left and vice-versa.

On the outside of the chamber was a pressurized hose that could be manipulated by the operator to blast away sand, dirt, and debris from his locale, allowing him to work clearly on the side of the vessel. The chamber itself was divided into two portions. The lower part was attached to the tracked chassis and contained the motor and driveshaft. The upper part of the chamber contained the operator and controls and could rotate, allowing the machine to use its drills against the sides of the ships it was salvaging.

The tractor unit could not float or ’swim’ and was simply lowered to the sea bed by chains from a hoist where it had limited movement, but it had proven itself to be a viable system. Reno’s underwater salvage firm employed his salvage methods successfully in the 1920s and 30s. It was used in the Baltic for the Estonian government reclaiming parts from the 15,000 ton Russian battleship ‘Slava’ from a depth of 40 feet (~12 m), and closer to home with the recovery of the 500-ton Coast Guard cutter ‘Scally’ which sank off Long Island Sound in 65 feet (~19.8 m) of water. Reno’s suggestion of using this method to raise the Lusitania was not, however, ever taken seriously.

Reno never described his underwater vehicle as a tank. He did have other military ideas but not for this vehicle, although it has appeared subsequently online as some form of underwater tank akin to a Tauchpanzer. The machine was tracked, and potentially armed with a cannon, but it was not a military vehicle. Despite this, the design is an interesting one and important in regards to the development of tracked vehicles as it is likely the first underwater tracked vehicle ever built. It was certainly not to be the last, with both Great Britain and Germany looking at tanks which could drive on the sea-bed in WW2. What became of Reno’s underwater vehicle is not clear, likely it was simply scrapped though, as diving technology caught up through the 20s and 30s. Jesse Reno was inducted into the National Inventors Hall of Fame in 2007 for his work on the escalator and died in 1947, leaving behind a legacy of inventions well known, like his escalator, and obscure, like his underwater tractor. 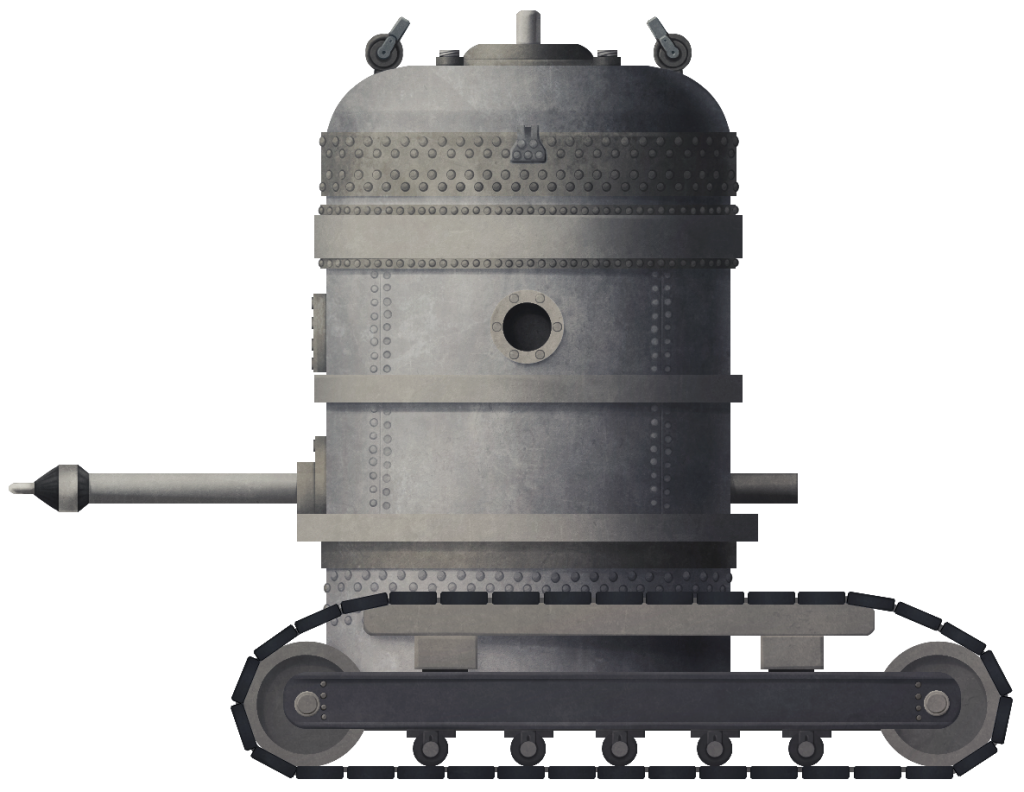