In an effort to provide increased firepower to assault troops, the United States Ordnance Department began a series of projects experimenting with the addition of rocket launchers to the United States’ armored fist, the Medium Tank M4. Although its 75 mm main gun could fire a highly effective High-Explosive (HE) shell, it was not sufficient to support large waves of attacking infantry. It proved insufficient though, against highly fortified positions the Germans had erected.
Although not as accurate as conventional artillery, rockets can cover a larger area in a short amount of time with explosives and shrapnel, thereby saturating a target in seconds. Rockets also have an added, negative psychological effect on troops under rocket attack, thanks to the screeching noise as they tore through the air.

The most famous of these tank-mounted rocket launchers was the Rocket Launcher T34, and thanks to the deafening noise that erupted from the tubes when the rockets were fired, it was nicknamed ‘Calliope’ after the Steam Organ. 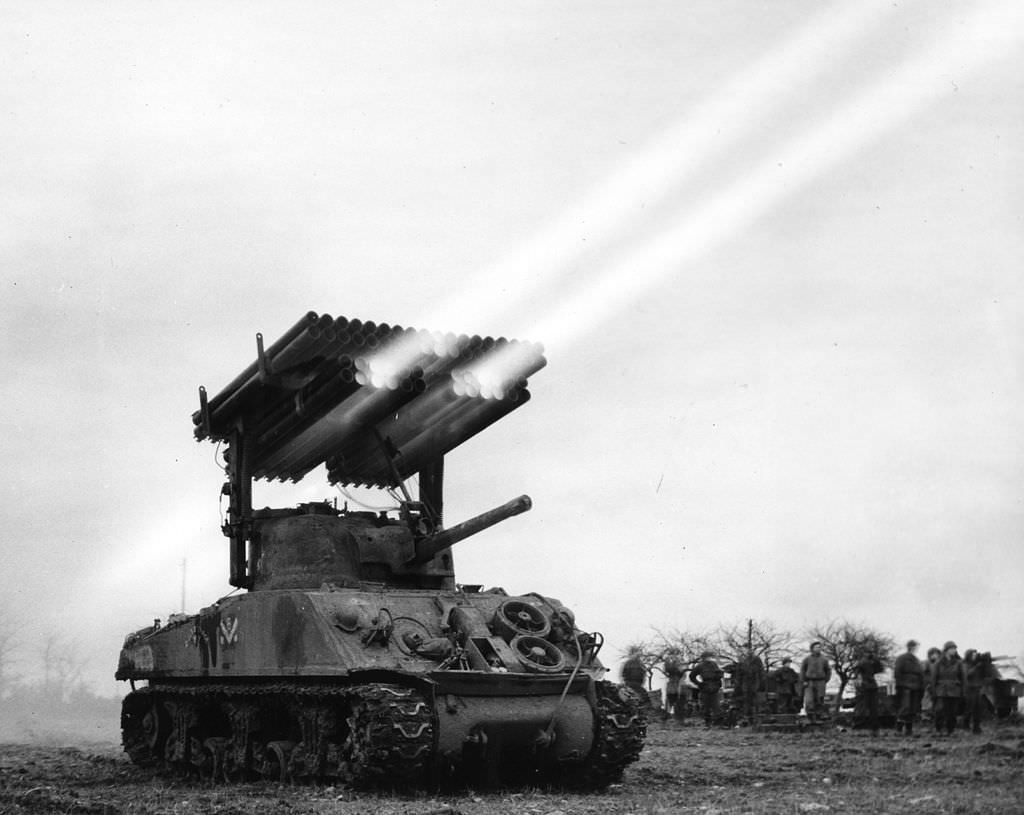 The tank started life in 1941 as the T6 and was later serialized as the Medium Tank M4. Entering service in 1942, the tank soon became a workhorse, not just to the US Army, but the Allied Armies as well thanks to Lend-Lease programs.

The T34 Calliope was mounted to multiple iterations of the M4, including M4A1s, A2s and A3s. All of the tanks the Calliope was fitted to were armed with the standard M4 weapon, the 75mm Tank Gun M3. This gun had a muzzle velocity of up to 619 m/s (2,031 ft/s) and could punch through 102 mm of armor, depending on the Armor Piercing (AP) shell used. It was a good anti-armor weapon and could also be used to great effect firing High-Explosive (HE) shells in the infantry support role.
For secondary armament, the M4s carried a coaxial and a bow mounted .30 Cal (7.62 mm) Browning M1919 machine gun, as well as a .50 Cal (12.7 mm) Browning M2 heavy machine gun on a roof-mounted pintle.

The T34 was mounted approximately 1-meter above the M4’s turret. A large support beam bolted to the left and right turret cheeks supported the weapon. The rack was physically connected to the barrel of the M4’s 75mm gun via an arm. This arm was connected to the rack via a pivoting joint and clamped to the gun with a split ring. This allowed the missile launcher to follow the same elevation and depression arc of +25 to -12 Degrees. Having the launcher attached, however, did reduce this slightly.

The launcher assembly weighed 1840 Pounds (835 kgs) and was comprised of 60 tubes. These tubes were plastic and mounted in an upper bank of 36 tubes, with two side-by-side banks of 12 below it, one on each side of the elevation arm attached to the gun. The weapon fired the M8 rocket, a 4.5 inch (114 mm) fin-stabilized projectile armed with High-Explosive, which had a maximum range of 4200 yards (4 km). Individually, these rockets were highly inaccurate, but as a barrage weapon, they were extremely effective. The rockets were fired electronically from inside the tank via cables that ran through the commander’s hatch. The rockets were loaded at the back of the launcher. A crew member would have to stand on the tanks engine deck and slot them in one-by-one. 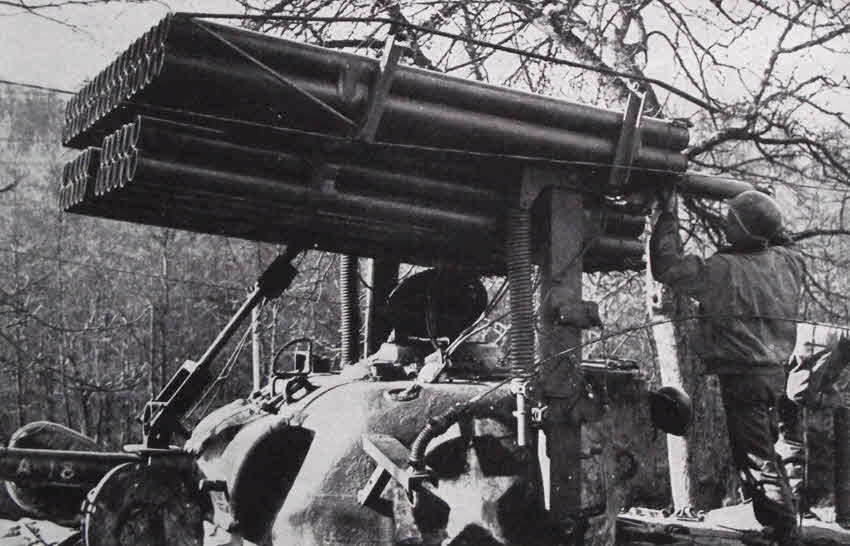 When these weapons were employed in Europe, they were not popular with tank crews because the gun could not be fired while the launcher rack was attached. Field modifications done by the crews began to arise that connected the elevation arm to the top of the gun mantlet. This allowed the gun to be fired, but the narrower movement angle of the mantlet meant reduced elevation of the launcher.

This was an upgraded version of the T34 which incorporated fixes to address the concerns of crews in the field, and was basically a serialization of the popular field-mod that had arisen. Modifications were introduced to allow the 75mm main gun to fire with the launcher attached and retain its original elevation range. To achieve this, the elevation arm was attached to the small metal extensions near the base of the gun, found on the M34A1 pattern mantlet.

The E1 also replaced the plastic tubes with magnesium ones and was equipped with an easier system cut-off for simpler jettisoning. The T34E2 was almost identical to the E1, but had an improved firing system. It was one of these models that received the nickname ‘Calliope’ when it was witnessed firing, and from there, the name stuck. 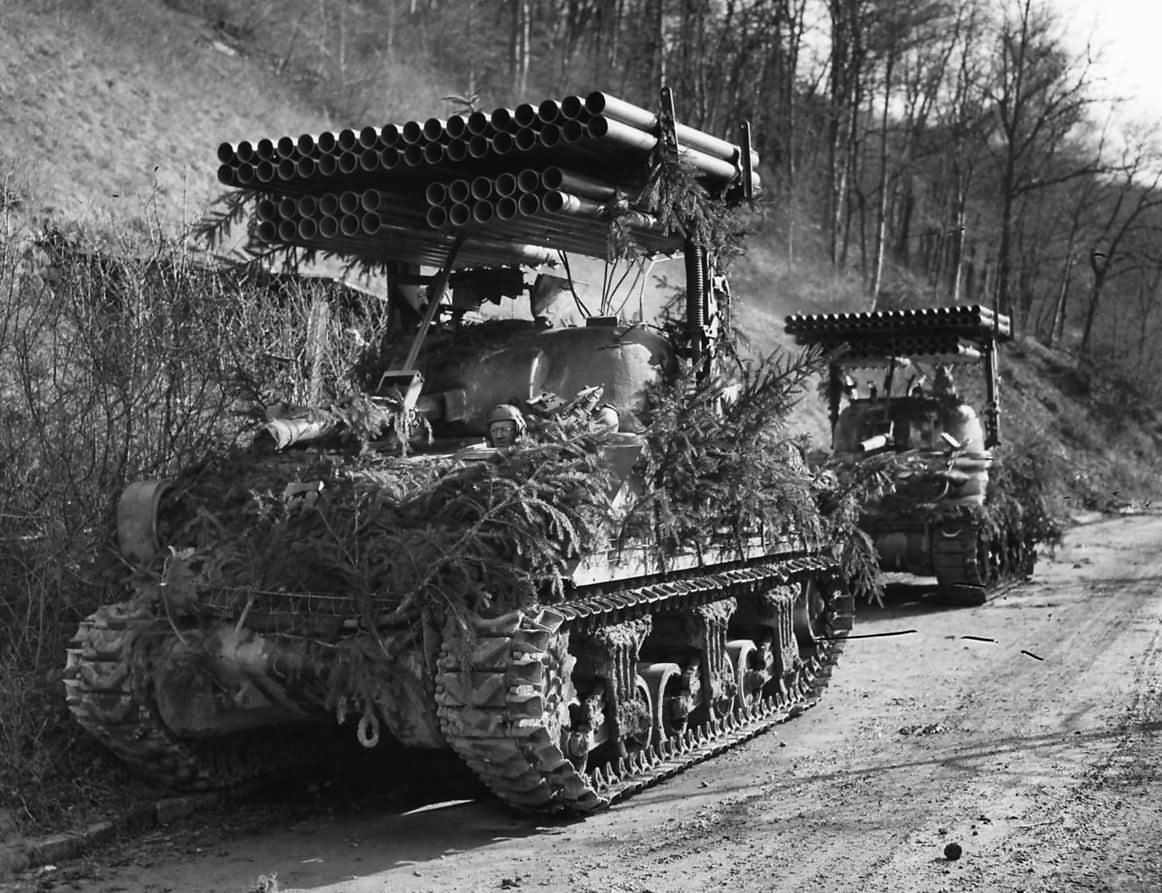 Two Calliope armed M4s of the 80th Division wait on a roadside to be called into action. Note the heavy use of foliage camoflauge. Photo: SOURCE 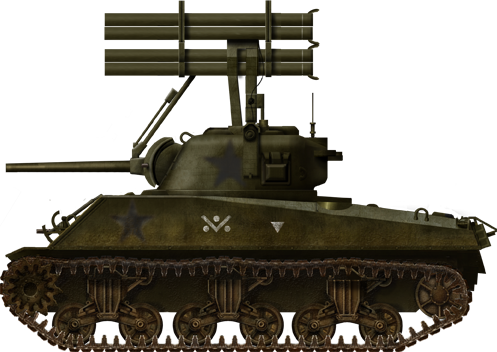 Illustration of a Caliiope armed M4A3, based on the photo in the left column, by Tank Encyclopedia’s own David Bocquelet.

In the end, the Calliope did not see much action and did not play a huge role in the World War Two. A large number of the launchers were manufactured prior to D-Day, the Allied invasion of Europe, and shipped to the United Kingdom in preparation for the invasion. There were plans to use the Calliope during the invasion to clear beach defenses. This idea was soon dropped as it was thought that the high center of gravity caused by the launcher would make the tanks unstable on landing craft.
Not much work was available to the Calliope throughout the remainder of 1944. Thirty M4s of the 743rd Tank Battalion had the T34 launchers installed to assist a planned push by the 30th Infantry Division in December 1944. The German Ardennes offensive put a halt to this plan though, and the launchers were discarded without one rocket being launched. 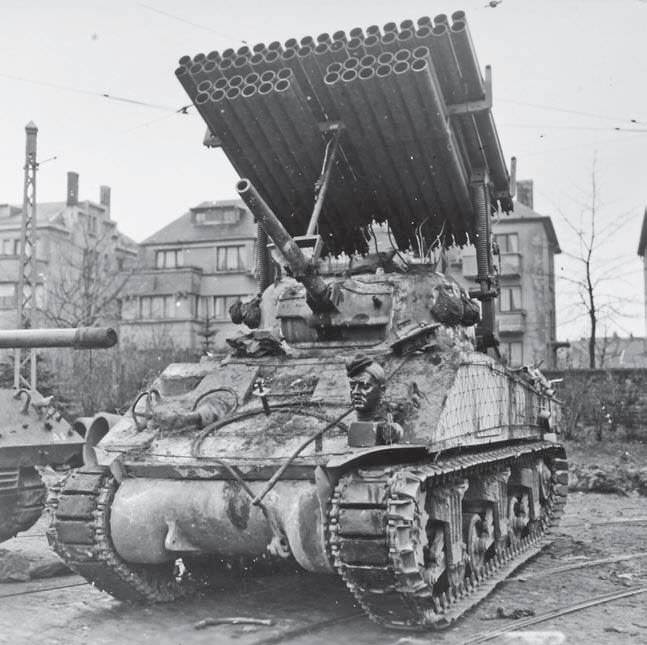 This M4 fitted with the T34 is covered in various, storytelling features from its time in service. It has evidence of copious amounts of applique concrete armor, a collection of miss-matched end-connectors on the tracks, and, to top it off, the tank wears a bust of Hitler as a hood ornament with added jaunty cap. Photo: Presidio Press
More opportunities for the Calliope to play its tune of terror came in 1945. It was used in small numbers in various actions by the 2nd, 4th, 6th, 12th, and 14th Armored Divisions. It was also deployed by the 712th, 753rd, and 781st Tank Battalions. It is from this time we have a personal account from Glen “Cowboy” Lamb, 1st Platoon, C/714 Tank Battalion, 12th Armored Division, donated to us by his son, Joe E. Lamb. Glen Lamb commanded an M4A3 (75mm) named “Coming Home” that also had the word “Persuader” painted on the main gun. His account is as follows:
“The rocket equipped tanks were prized targets for the Germans so they stayed at the back of the pack. One of my best friends was the driver of this tank. One day, the tank and all the other standard Shermans went down a road unscathed, but the Germans had just been waiting. When the Calliope came along the Germans opened up on it with a 20mm anti-aircraft gun and my friend had his head blown off.” 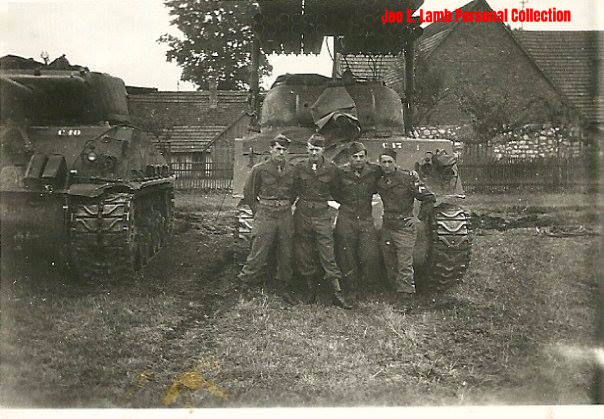 Glen “Cowboy” Lamb and his crew in front of their Calliope equipped M4. Photo: Joe E. Lamb Personal Collection
The Calliope had a similar, demoralizing effect as the Churchill and Sherman Crocodiles. With these flamethrower armed tanks, the mere sight of one would induce the enemy to turn-tail and run. With the Calliope’s, it was the noise created by the rockets that produced the same effect. The shriek of a rocket flying overhead would be spine-chilling to any soldier on the receiving end. Such weapons often mentally defeated their targets, rather than physically so.

In 1945, a replacement for the 4.5-inch M8 rocket became available. This was the spin-stabilized M16. As this suggested, the fins of the M8 were discarded for this rocket, which used spin-stabilization like a rifle bullet to fly accurately. The spin was achieved by the use of canted nozzles in the base of the rocket, the propellant gases escaping these nozzles induced rotation. Results showed that the M16 was far more accurate than its fin-stabilized cousins. Still, they were not accurate enough for point-targets, but firing en-mass produced tighter dispersion patterns than the M8s. The range also increased to 5250 yards (5 km).
For this rocket, a new launcher was developed, namely the T72, which was designed specifically for use with spin-stabilized rockets. The configuration of the launcher was similar but not identical to the T34. The launcher consisted of 60 tubes, consisting of a double-bank of 32, with two 14-tube banks below it, either side of the elevation arm. The tubes were shorter than the T34, and the rockets were loaded from the front. This launcher was also able to remain attached when the main gun was fired.
A further effort to increase the firepower of tank mounted rocket launchers resulted in the Multiple Rocket Launcher T40, later serialized as the M17 and nicknamed ‘Whiz Bang’. This launcher was designed to fire a 7.2inch (183mm) demolition rocket. These weapons were mounted in the same way as the T34, but only carried 20 rockets. They saw limited service during the French and Italian Campaigns.
An article by Mark Nash

Thank you for doing an article on the t34 calliope :D, also would the katyusha be a possible article? I know it isn’t exactly armored but it played an important role for the Soviets. If there is already one could you put a link.

It may well appear in the Future. Keep an eye out.
– TE Moderator.

I must admit to a little confusion:
In my research, I had thought the differences between the models of Calliope were that the -E1 had four more launch tubes and the -E2 was able to fire the 7.2-inch rockets.
Also, is there any record of anti-armor performance for the 7.2-inch rocket as there is for the M8?

The M17 ‘Whiz Bang’ was the only version that fired the 7.2-inch rocket. An article on this will be published soon. As I recall, there is no recorded information as to the effect of the rocket on armor.
– TE Moderator

I have since found three book sources that say that the Calliope had a 7.2-inch version (and the Whizbang was a different launcher, entirely):
https://books.google.com/books?id=1I6HCwAAQBAJ&pg=PT66&lpg=PT66&dq=t34e2+calliope&source=bl&ots=WMnHlcIAaf&sig=JFGufsgq2DhpdXHtPZS-sMgf-gU&hl=en&sa=X&ved=2ahUKEwil0pXIpsXaAhUSHGMKHSdZD3M4FBDoATAHegQIABAB#v=onepage&q=t34e2%20calliope&f=false
https://books.google.com/books?id=_wzXAwAAQBAJ&pg=PT104&lpg=PT104&dq=t34e2+calliope&source=bl&ots=c7AJEd2R-A&sig=Qt4jlVm21XgkekhlR62mPc5fHIA&hl=en&sa=X&ved=2ahUKEwilipqwqMXaAhVL4mMKHT3SDno4KBDoATAAegQICBAB#v=onepage&q=t34e2%20calliope&f=false
https://books.google.com/books?id=nKrVDgAAQBAJ&pg=PT32&lpg=PT32&dq=t34e2+calliope&source=bl&ots=H9qxJF7knA&sig=TJmwNrJhoc1AFSmXX_IM89kN_r8&hl=en&sa=X&ved=2ahUKEwilipqwqMXaAhVL4mMKHT3SDno4KBDoATABegQICRAB#v=onepage&q=t34e2%20calliope&f=false

Why was it called a t34 calliope if it was a sherman tank?

The rocket rack was designated T34, it is a separate piece of equipment to the M4 it was mounted on.