After the September Campaign in 1939, Poland was occupied and split between Germany and the Soviet Union. However, the occupation didn’t stop the Polish people from continuing the struggle. Soon after the occupation, the Home Army (Polish: Armia Krajowa) was established, an underground resistance group.
Their biggest employment would be the Warsaw Uprising which started on August 1st, 1944 at 5 PM. The organizers of the Uprising hoped that the Soviets, who were near Warsaw, would help them, but the Red Army stopped just 10 km from the city. The first days of the Uprising went pretty well for the Home Army, especially when they captured two tanks of the German enemy.
The Uprising tragically ended on October 2nd, 1944 with over a hundred thousand dead civilians and thousands of troops on both sides. The city was razed by the Germans to the ground to punish the Poles who rebelled against the occupier. The city would be rebuilt after the War by a new pro-Soviet Communist Government.

The Ausf. G was the most produced model of the famous Panzer V Panther. It is estimated that around 2,961 tanks of this type were built. Some of these were used by the 27th Panzer Regiment of the 19th Panzer-Division. The unit was moved to Warsaw from the Western Front and resupplied with the brand new Panther Ausf.G tanks’s. In the morning of August 2nd, three Panther Ausf.G tanks’s were moving without infantry support through the following streets; Górczewska, Młynarska, Smętna, Powązkowska, and the Okopowa street, where the group of three tanks got ambushed by the Polish rebels. One of the Panthers was burned out by Molotov cocktails thrown by the Resistance. However, the crew escaped in time and moved to another Panther. They turned to the Mirecki street where the tank was first attacked with hand grenades, then with a No. 82 grenade commonly known as the ‘Gammon bomb’. There is also a second version of the story. According to it, the tank wasn’t hit by a ‘Gammon’ but by a PIAT (Projector, Infantry, Anti-Tank). Either way, the tank’s turret was damaged, making the tank swerve violently off the street and crashing into a wooden house which was nearby. Then, finally, the tank and its crew were captured. The captured Germans agreed to train the Poles in using the tank in exchange for their lives. The third tank that was left at Okopowa was also damaged by hand grenades and immobilized. Its crew escaped and left it in almost perfect condition. 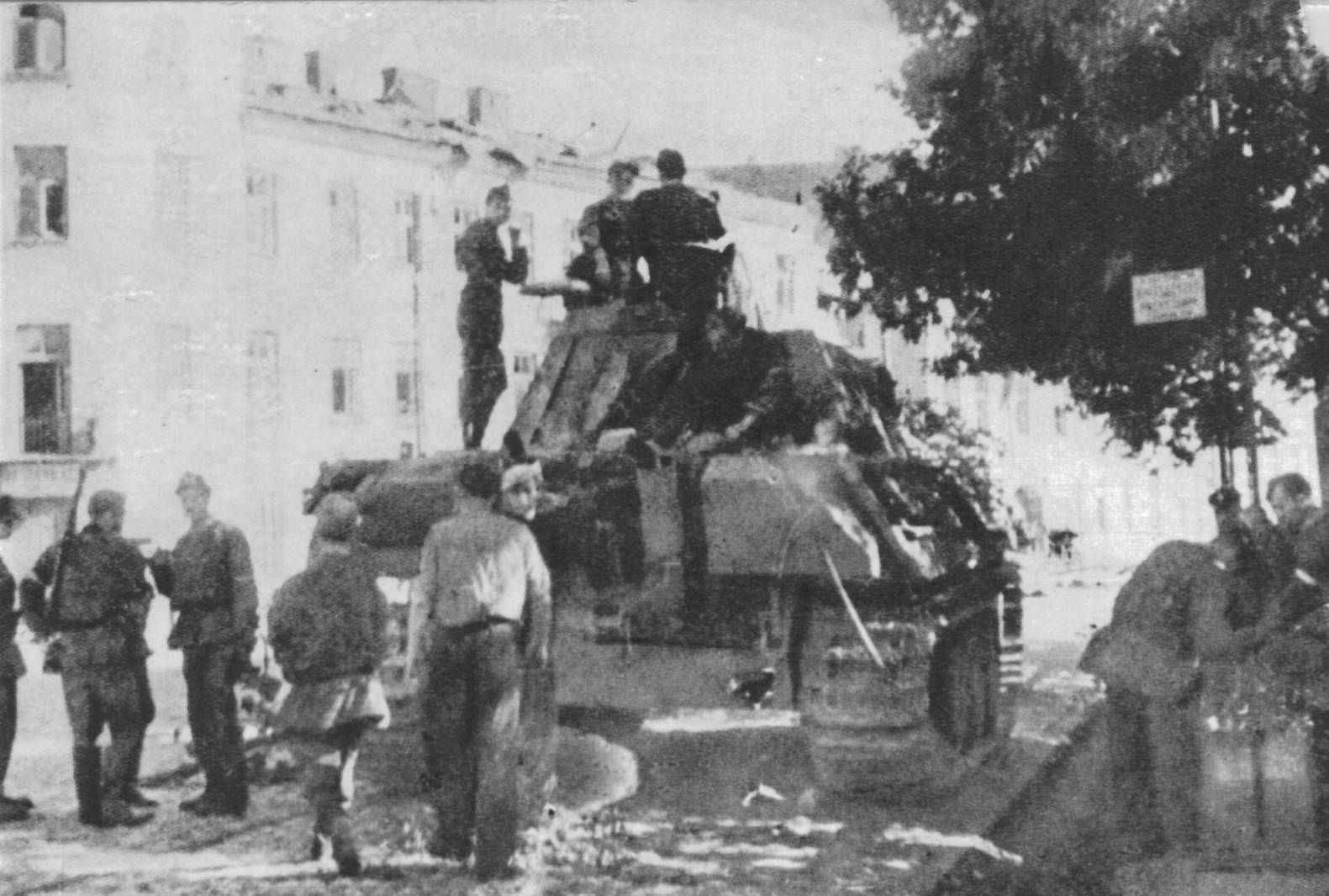 Under the Polish Flag

Since the two tanks were in almost perfect working order, the rebels decided to fix the mechanical issues and use them in urban combat although this was not done until the next day, August 3rd. At the same time, two crews were formed, with 6 members in each. The Independent Armored Platoon of the Zośka Battalion (Polish: Samodzielny Pluton Pancerny Batalionu Zośka) was thus formed under the command of Wacław Micuta. The crews had 6 members instead of regular 5 because the tank commanders also had other command duties at the same time. So, the commanders wanted to have the tanks fully operational even when they were tied down with other tasks. 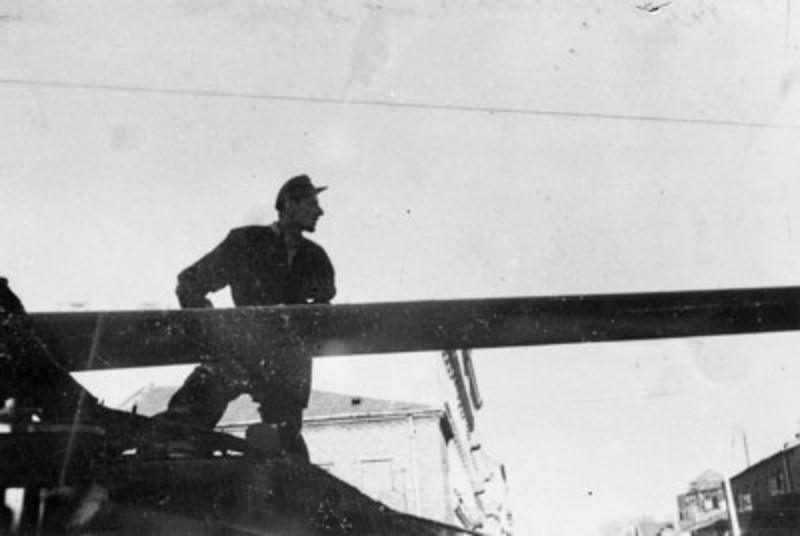 Wacław Micuta (pseudonym: Wacek) on a captured Panther, somewhere near the Okopowa Street. Source: Wikimedia Commons
When the repair work started, a captured German put to work repairing the tanks discovered that one of the tank’s fuel pump had been damaged. The crew could not deal with the problem until Jan Lumieński showed up. He was a skilled mechanic who had worked in a German tank plant before. He made the captured Panther work by fixing the air filter and tweaking the ignition. The captured Panther was used either in the evening hours of August 3rd or in the early hours of August 4th. This Polish Panther moved to a nearby street to test its gun by destroying a German machine-gun nest which was located on the tower of the St. Augustine Church. The target was knocked out with two shots.
In the meantime, the second Panther was still stuck in the wooden house and the Polish fighters were trying to free it. They first tried to tow it out using the first Panther, but this attempt, unfortunately, failed because the tracks were sliding on the ground. In the end, Polish soldiers had to disassemble the house manually to get the tank unstuck. 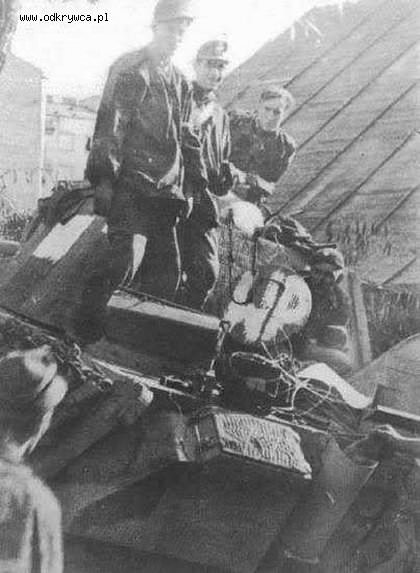 The second Panther had a big Polish flag painted on the left and right of the turret. ‘WP’ was painted in large letters on the rear of the turret. This was the abbreviation for Wojsko Polskie (the Polish Army). This was done to avoid friendly because the Germans also used the Panthers Ausf.G tank’s during the Warsaw Uprising. Source: odkrywca.pl
When the tank was finally freed, an inspection was made and it was discovered that, like the first tank, it had only minor damage and it was decided to put it in combat as well. However, it had a destroyed rear turret plate and this needed fixing. It was repaired at some point during the following days. These tanks also received nicknames; the first Panther was nicknamed ‘Pudel’ in honor of an officer, Tadeusz Tyczyński, who had died in combat. However, the crew gave it the unofficial nickname ‘Magda’. The other one was nicknamed ‘Felek’, however, it is also referred to in modern bibliography as ‘WP’ (the abbreviation for the Polish Army; Wojsko Polskie). 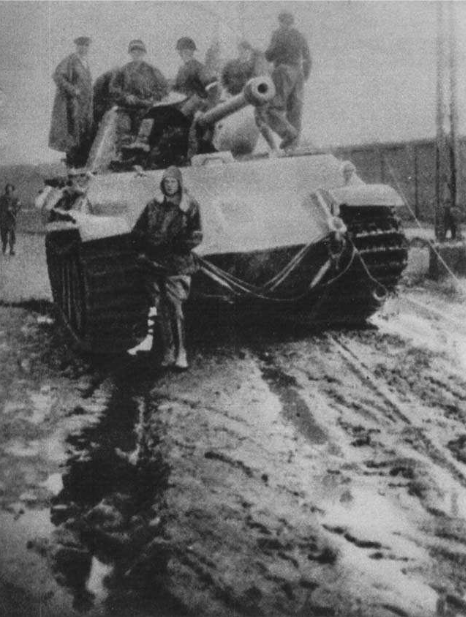 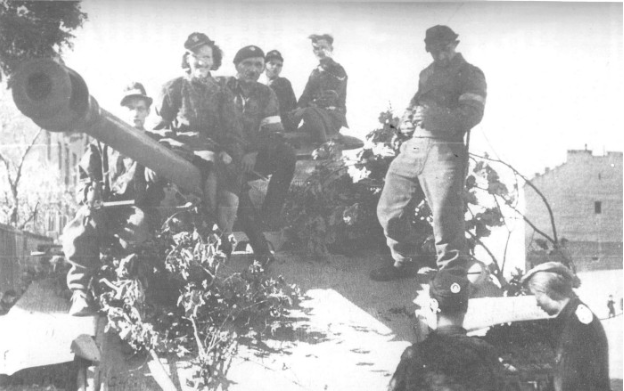 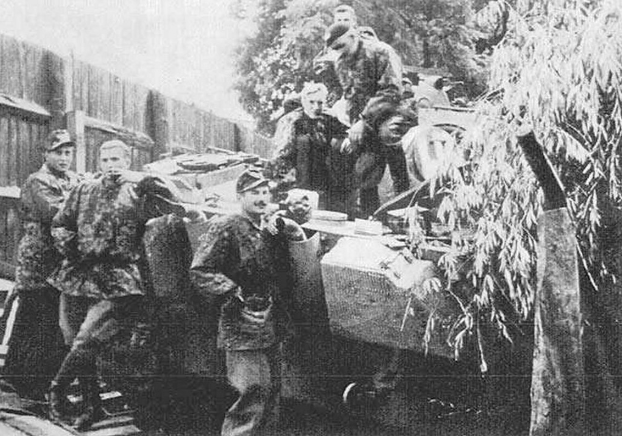 ‘Felek’ in the process of renovation. The key figure of this project was Jan Lumieński (in the middle, he is also incorrectly called Jan Łuniewski) who had worked with German tanks before. SOURCE
Pudel saw action for the second time during the liberation of the St. Sophia Hospital, the attack on the Gęsiówka concentration camp and the raid on the Police Academy. The tank especially proved its effectiveness in the liberation of the camp, where only one soldier died. However, the two other actions were much more bloody because of a terrible coordination mistake. Felek was ordered to support the attack on the Police Academy which was heavily fortified. However, the captured Panther did not receive permission to open fire before the entire attack was underway. Because of this mistake, many Polish soldiers were killed by machine-gun fire even before the Panther arrived and turned the tide. In the end, the operation was successful, although it was a Pyrrhic victory because of critical casualties. 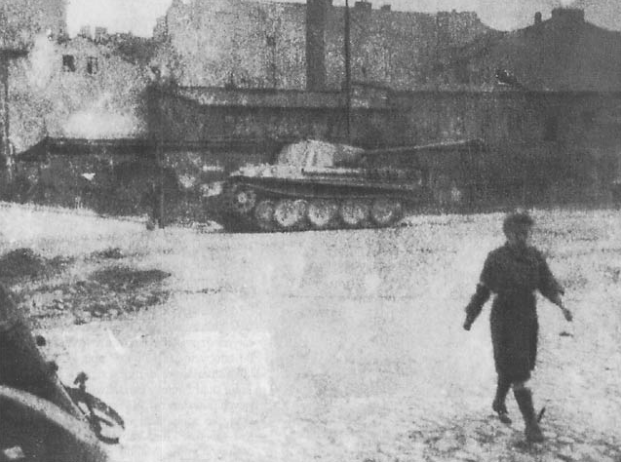 ‘Pudel’ in action. The tannery of Pfeiffer is visible in the background. SOURCE
The two Panthers went into action once again on August 8th, 1944 to support the troops fighting the Germans in Karolkowa Street. When ‘Magda’ arrived from Mirecki Street to Karolkowa, it was hit by three 75 mm tank shells. It is unknown what hit the Panther, either a Jagdpanzer 38(t) or a Panzer IV Ausf.H. The tank suffered minor damage and some of the crew were wounded. The vehicle was repaired on August 9th and, on the next day, it knocked out a German Sd.Kfz. 263 8-Rad. In the afternoon, ‘Pudel’ knocked out another machine-gun nest in the St. Charles Borromeo Church.

In the meantime, the situation in the Old Town was critical for the Home Army. Moreover, ‘Felek’ had a problem with a battery and it was decided to destroy the tank. Felek’s ammunition got transferred to the ‘Pudel‘. On August 11th, ‘Pudel’ engaged its last fight covering the Polish counterattack, however, it was damaged and abandoned by the crew. The crew decided to burn it out to avoid the German re-capture of the tank.

Pudel: The tank was covered with various insignias representing the Polish nation such as the red-white-red rectangle and the lily of the Scouts. The German Balkenkreuz was painted over with a white circle.

‘Felek’: This tank had two large Polish flags painted on the left side of the turret to avoid friendly fire. Unlike the Pudel, the Balkenkreuz was not painted over.

These illustrations were produced by Andrei ‘Octo10’ Kirushkin, funded by our Patron Golum by our Patreon campaign.

3 replies on “Pudel & Felek – Polish Panthers in the Warsaw Uprising”

I am very glad that you have covered some of these more obscure tanks.
I am a fan of WOT myself…
Of course it is a massively biased video game!
However I was interested in tanks long before then!
In their convoluted way of introducing tanks to their game, in often the wrong way in my opinion…
These are often stories that are interesting & worth covering in more depth!
I am very happy to see your efforts, in producing the real true stories of these vehicles.
Which are certainly of note, due to the genuine original stories behind them!
Cheers

Sigh. How long would you continue to repeat this myth about “Red Army stopped”? Red Army WAS stopped – by hard German counterattacks, after several attempts to break through the defenses.