In the early 1920s, the Netherlands did not feel a need to acquire any armored vehicles. Nevertheless, the army had plans to buy one Renault FT tank and was already operating one armored car, based on an Ehrhardt Kraftwagen-Flugabwehrkanone taken from the Germans in 1918. These vehicles only served the purpose of familiarizing the army with the use of armored vehicles. For the same purpose, an improvised vehicle, made to look like an armored car, was built in 1924 in a local army workshop. The turreted vehicle during exercises on the Veluwe in 1925. Note how it is covered in a smokescreen. Photo: Image Library Dutch National Archives.

The improvised vehicle was constructed by the Regiment vestingartillerie (Regiment Fortress Artillery), based in the city of Naarden. A GMC lorry was taken and a 37 mm gun was installed in the back on a pivot. The cabin and gun were enveloped in steel, tin, and wood, made to look like armor. The gun stood out above the roof and a wooden dome-shaped turret was placed around it. The spoked wheels were also covered with steel plating.
When the vehicle was put into service, it was quickly found that the added weight was far too much and the lorry could not drive faster than 24 km/h (~15 mph). Due to the thin armor and use of tin, the vehicle received the nickname blikken pantserwagen, (Eng: ‘tin armored car’). In 1927, the vehicle was slightly adjusted and the structure was reinforced to resolve the weight problem, after which it was put into service with the Korps Rijdende Artillerie (Corps Horse Artillery, abbreviated ‘KRA’). Somewhere during this time, it was repainted and also received a new registration number, M27012, and tactical number 702.
The vehicle was used in exercises, the last time being in 1931 when the superstructure and gun were dismantled by the KRA. The lorry was then used to transport newly acquired Carden Loyd tankettes. Picture showing the first vehicle after it got adjusted and was put into service with the KRA. Note the wooden turret and the (either red or blue) cloth strung around the headlights. It indicates to which army it belongs during war games. Photo: Image Library Dutch National Archives.

Five years after the initial vehicle was built, the army wanted to acquire a foreign armored car and 12,000 guilders were made available, worth US$114,120 in 2016 money. Negotiations with multiple manufacturers including Citroën and Škoda failed, so First Lieutenant A.L.W. Seyffardt decided to design an armored car himself. Apparently, the construction of eight vehicles was planned, and they were to be assigned to the Recce sections of the divisional groups and to the Bicycle Battalions, although some sources contradict on that matter. However, eventually, three vehicles were built. These three armored cars were built by the Korps Motordienst (Corps Motor Service) located in the city of Haarlem. The armor was taken from various gunshields and they were quickly nicknamed Kippenhok, (Eng: ‘Chicken Coop’). A GMC Kippenhok during the Jordaan Riots in July 1934. Photo: Image Library Dutch Military Archives.
The vehicles were built in 1931. Some features were a sheet iron roof, two oil lamps inside, and front and side armor with vision slots covered by armored glass. Three gunports were made, one in each side and one in the front. They could all be covered by an armored plate if necessary. The spoked wheels were covered by steel plates and had solid tires. Each vehicle received a black-green-yellow camouflage scheme.
The armament consisted of three 6.5 mm Lewis M.20 machine guns. The cars also featured double-steering with a driver in the front and in the back. A carbide searchlight could manually be raised from within the car and provide light when necessary. The front armor plate could be folded down completely, giving both the commander and front driver a vulnerable position but a clear view in return. The crew consisted of seven people, one commander, two drivers, three machine gunners, and one signaller. Despite being built in 1931, the vehicles were still based upon an outdated chassis and, in that sense, already obsolete when they were built. However, they formed the inspiration for the more modern Morris armored cars, of which three were built in 1933. Both deployed vehicles are visible in this image. The commander and driver positions are clearly visible. Photo: Image Library Dutch National Archives. 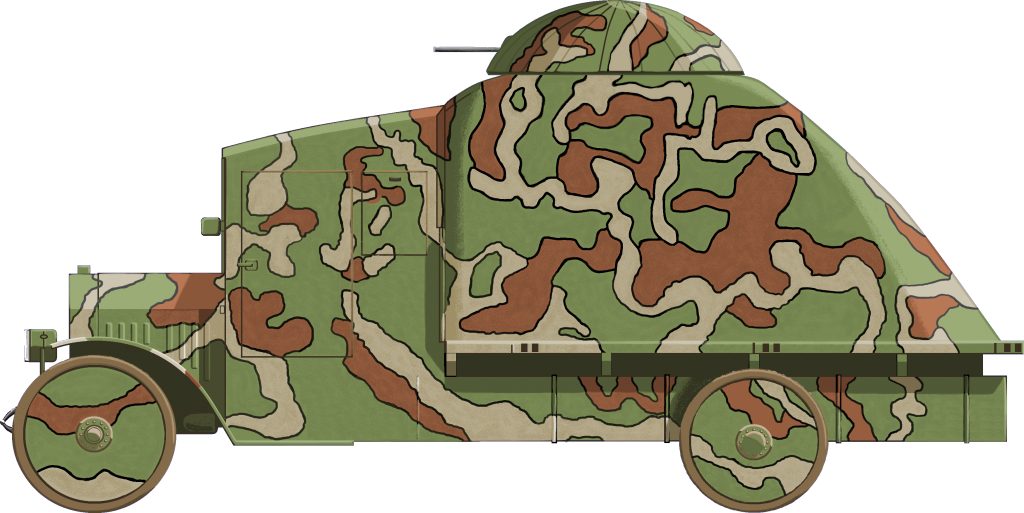 The turreted improvised armored car as it would have appeared during exercises on the Veluwe in 1925. Illustration by Jaroslaw ‘Jarja’ Janas, funded by our Patreon campaign.

After completion, the three vehicles were assigned to the Second Company Police troops stationed in Amsterdam. With these troops, the vehicles would see their only operational use when, in July 1934, riots broke out in the city district Jordaan. Due to the economic crisis started by the Wall Street Crash in 1929, there was a high unemployment rate across the country. Many unemployed people lived in the city of Amsterdam, and when news came that the social benefits would be lowered by ten percent, riots broke out. The police responded by asking the military for help and also tried to deploy its own armored cars. Image of one armored car during the Jordaan Riots in July 1934, Willemstraat Amsterdam. Photo: Image Library Dutch National Archives.
However, when the obsolete armored cars were deployed on July 6th, one of the cars suffered an immediate breakdown. The other two could be deployed but it was feared that the front axles could break due to the heavy overload. For this reason, the vehicles were only deployed together. When the newer Morris armored cars arrived, the GMC’s were pulled back from action. They were taken out of service and scrapped the very same year.
Although the riots became known as the ‘Jordaan Riots’, disturbances also took place in other city districts and in other places throughout the country, but these were not as violent. In the Jordaan, streets were broken up and barricaded. The riots were violently suppressed by the police and military. According to the police, five people were killed, while 56 people were heavily wounded, among them were eight policemen and one member of the military police. A shot of the two vehicles on the move during the riots in Amsterdam. Note the searchlight hatch in the roof. Photo: Aviarmor.net